Oh the Places I've Been 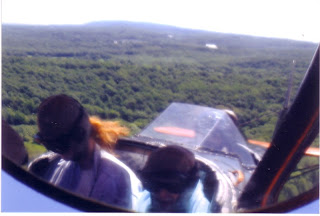 I see that my last entry was in July. It’s been a busy month and a half. So, what have I been doing instead of posting to my blog?

Let’s start with the first week of August. I took a lovely biplane ride with my in-laws. The Old Rhinebeck Aerodrome remains a great place, and as far as I can tell the only place locally, to get a biplane ride. The modern experience of flight really insulated the flier from the experience: the flier sits in a sealed cabin, and the heights and speeds involved are quickly so out of the normal human range that what you see is fairly abstract. In a biplane, with the wind in your hair, flight is very different. You can reach out and feel the air rushing past you, the overwhelming roar of the engine is less than ten feet in front of you. We couldn’t have been more then fifteen hundred feet in the air, and everything is still quite recognizable–houses, trees, cars, even people. And the Hudson River Valley is beautiful as it spreads out below you like a beautiful tapestry of trees.

This flight was rather different from the one I took two years ago. The pilot did a tight 360 on a wingtip. Last time, we circled rather lazily. The difference might have been that I tipped the pilot in advance this time.

Later, I went to Silent Hill with friends Shinankoku, Mrs. Shinankoku, and the Queen of Science. Oh it wasn’t quite what you’ve seen. But consider this, we went up Mount Equinox, and into the clouds. When we got to the top, it was every bit as foggy as the video games (the pictures are still in the camera), with thick tendrils of mist within ten feet of you, and absolutely no visibility past thirty feet. Seriously—you couldn’t even see across the parking lot. And it was quiet. No sound other than us and the chill, damp wind blowing through the scrubby pines. When we the last time you were somewhere that you were the only noise around? No music, no cars, just your footfalls, the sigh of the wind in the skeletal pines, and anything you say that isn’t immediately swallowed by the omnipresent mist.

Adding to the creepy was the fact that there is an abandoned hotel on the mountaintop. It’s sort of a cheesy 70's place, pre-fab, and clearly has seen better days. But it’s not altogether abandoned, apparently, because there was a light on in back. Sometimes you come across the tiny shards of a story. I always wonder about the rest it—where it started, and how it will change in the future.

Later, we went to a ProjektFest in New Haven. I can safely say that the Gothic Music festival is the loudest thing I have ever been to, and that includes sitting than six feet away from an airplane engine. And I saw perhaps the most exquisitely beautiful woman I have ever seen in the flesh. No, I don’t’ have any pictures of her. We got to see Voltaire and Niki Jane live (I want to learn to play the musical saw). Niki Jane was awesome, but Voltaire was definitely the highlight of the show, since he was funny, energetic, and with an excellent rapport with the audience. He and all of his band were dressed to the nines in some absolutely beautiful Edwardian outfits.

And really, I would think that was enough.

But it wasn’t. I also finished the first draft of my novel on the 11th.

Let me say that again, I FINISHED THE FIRST DRAFT OF MY FIRST SOLO NOVEL! And I did it because I worked hard for most of August, when I wasn’t flying, or visiting frighteningly quiet mountain tops, or having my ears assaulted by industrial music, and through the beginning of September. And if that weren’t enough, I spread my wings a little and redesigned the main page of qusoor.com.

Before September is over, I will have written an essay on William Peter Blatty’s comedies, and starting in October I’ll be revising the novel, hopefully so I can interest someone in it at World Fantasy Con, which is the first week of November. So the reason I haven’t been posting on my blog is because I’ve been working my frikkin’ tail off.