The Imperium of Man has received reports of a heretofore unencountered strain of xeno, hereafter designated Splinter Fleet Mordiggian.

After three months of painting and learning the system, I put five hundred points of Tyranids on the table. And I enjoyed myself a great deal. 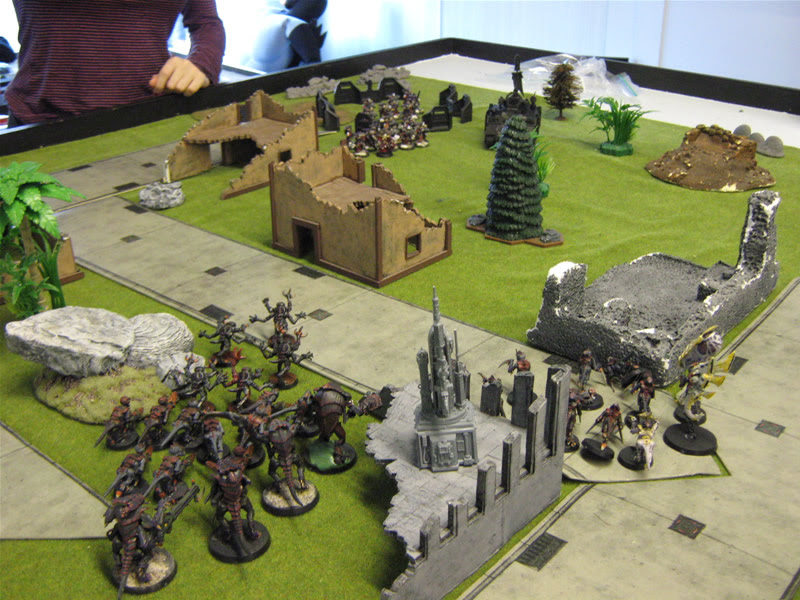 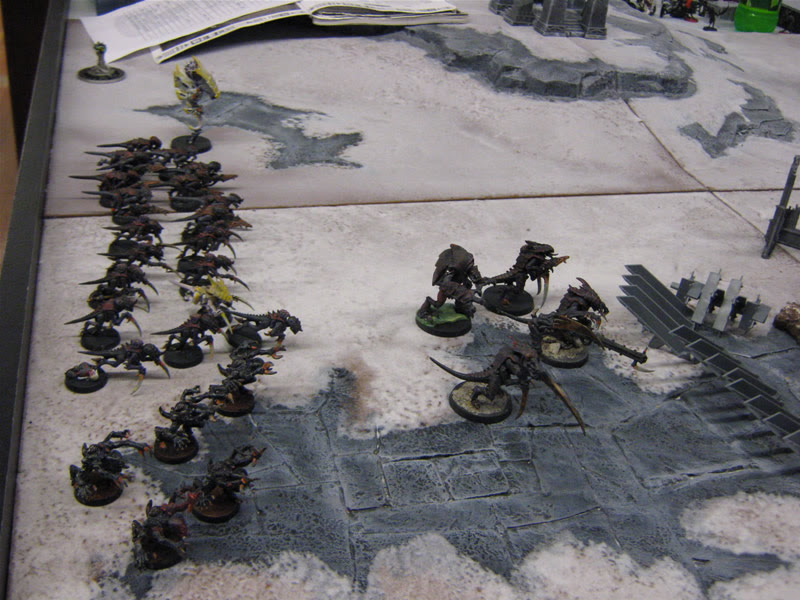 You're looking at 10 Termagants, 10 hormagaunts, 3 warriors, 1 zoanthrope, 5 genestealers, and a Crocodile Games Scarab Ogre standing in for my Tyranid Prime. 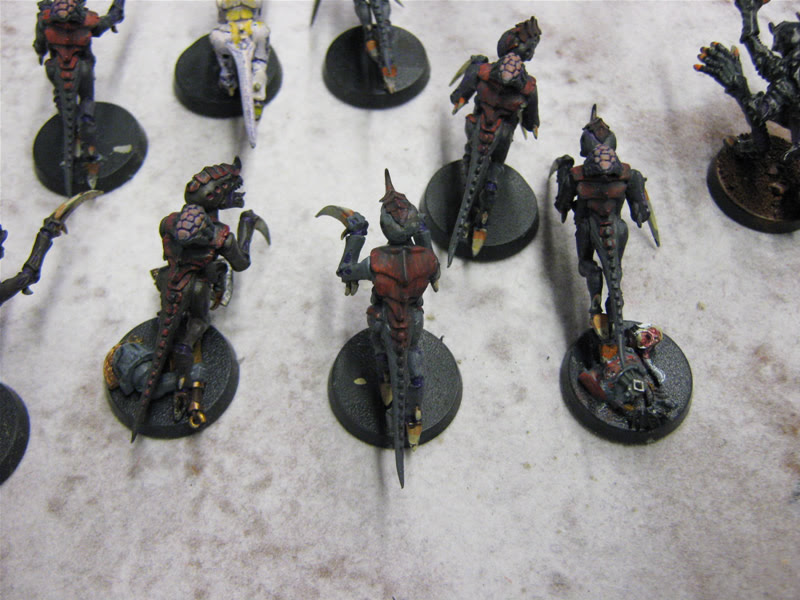 This picture shows a bit more of the detail of my paint scheme, which was inspired by Destroyah in Godzilla vs Destroyah. Also, the Santa Fe Good Taste Factory told me that no matter what I did, I had to kill Space Wolves. So a few of my bases have remnants of a Space Marine chapter, the Rune Bearers. The pieces are taken from a Space Wolves set. I got close to fifty heads on sprues, which will make excellent gristly trophies for a long time to come.

I was massacred in the first game because I had nothing to penetrate the armor of his Kans once my Zoanthrope was gone. In my second game I managed to pull out a tie against the Sisters of Battle in a very enjoyable and even game. I think I like Warhammer's declaration that some battles are not victories; it's entirely acceptable for neither side to win. God knows there have been enough inconclusive battles in history.

I'm enjoying Warhammer's feel. It's more of a wargame than Warmachine. Yes, the buy-in is significantly higher, but there's more a feeling of Clauswitz's "everything is more difficult in war" philosophy. When the dice roll, I calculate what should happen. But the dice (reality, fate, miscommunication, the incompetence of subcommanders, the ammunition got wet, etc...) tell me what did happen. I don't think the "fists full of dice" mechanic is particularly elegant, but it seems to insert an acceptable amount of random into the situation by dispersing it.

Warmachine, now that I've got the experience of two minis wargames, feels much more game-y, on the Gameist-Narrativist-Simualtionist spectrum. If you line up these three special abilities, you should be able to massacre the other guy's Warcaster. Warhammer tells you that you need the right tools that should take down the enemy (you really need armor piercing attacks against tanks, for example). Heroes are present, but they aren't the overwhelming power they are in Warmachine.

I think my career as a photographer has started. 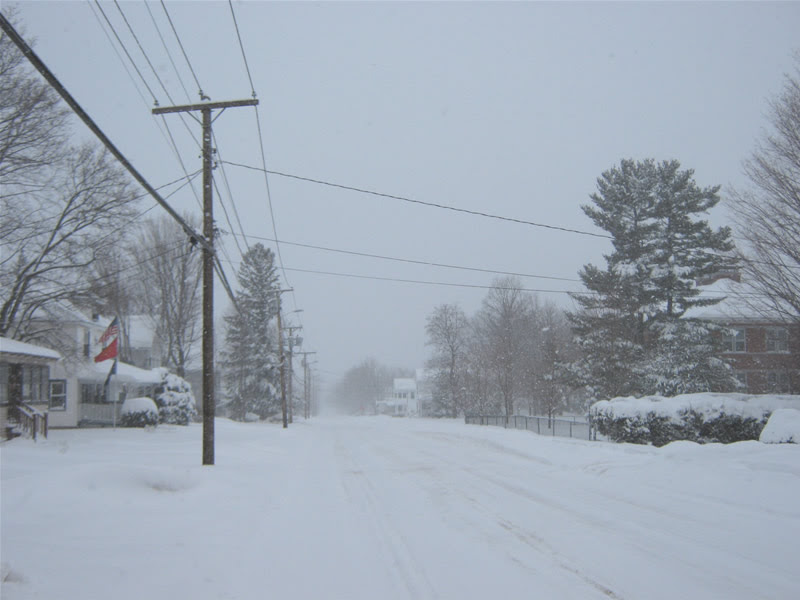 One of the joys of owning my own website is that I can peek behind the curtain and look at the mechanics. In this case, you're looking at the amount of bandwidth used by qusoor.com. It includes a rundown of how many times a particular page has been referenced, and where data is being sent. It's kind of interesting... about eight years ago, I discovered that Anton LaVey's daughter had linked to the Ultimate Hellblazer Index from her site.

Because I'm on a great server, I've got a lot of bandwidth that I don't use, so I'm pretty lenient about people who use my photos. But every now and then I check out the list to see who's using what. And if I don't approve, or some is heavily using my pictures, I'll put up an unpleasant image. If you're going to show a lot of people an image, at least have the decency to use your own bandwidth. My photo of Sting, for example, is surprisingly popular.

This morning, as I was looking through my links, I came across this little leach. I guess he likes my photography. Yeah, there's a difference between using it for free and actually paying for it, but I guess my photo was evocative enough that it suited his purposes.
Posted by John Goodrich at 11:15 AM No comments:

What I've been waiting for... the Bloom Box

The Bloom Box is an in-house power generator. If I read the article right, it uses fuel and oxygen to cerate emission-less power. I've been waiting for something like this since my father (who worked at a power utility) told me what a fuel cell was, some thirty years ago.

He also said (my father is very smart) was that "utilities are interested in more than just electrical power." And from watching PG&E's antics for close to a decade, he wasn't wrong. So keep an eye on the Bloom Box. This will be a massive decentralizing influence if it works half as well as advertised.

Although it's touted as an emission-less energy source, it's not a fuel-less energy source. We won't be able to replace the amount of petrolium fuel America consumes with biofuel. There simply isn't enough arible land. But I would like to see the efficiency numbers; how many coal-burning power plants will we be able to take off-line if these suckers work?

And how soon before they're small enough to stick in a car?
Posted by John Goodrich at 10:46 AM No comments:

A quick video by Iren Bear concerning Templecon. I was the camera man for this, and provided an occasional still, some of which you will recognize from my previous entry.

Posted by John Goodrich at 12:33 PM No comments:

I went to Templecon 2010 last weekend. This year, the convention was less exclusively about Warmachine (although there was still a lot of Warmachine). It had also moved venue to something that wasn't seven floors above ground, which made moving equipment and bulky packs stuffed with miniatures a lot easier.

The main event was Warmachine. And there was a LOT of it. 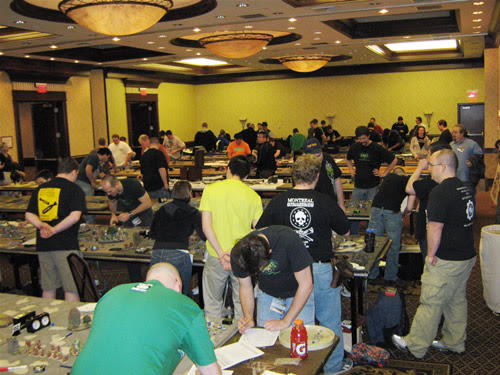 I never personally saw all the tables being played, but that is a load of tables, and that's a lot of people playing.

Other games were present in the periphery: Monsterpocalypse, Warhammer Fantasy, 40,000, Heavy Gear (I'd play if I could field all hovertanks. Yes, I'm an enormous Hammer's Slammers geek) and and Flames of War. I took this picture because it was the absolute epitome of the Flames of War game for me: A gentleman in a French cap playing a guy wearing a sweatshirt with a German Tiger Tank on it. That is what Flames of War is all about.

I did not play. I've lost my taste for Warmachine. But I hung around the scenario table my brother set, called "Incoming!" which distributed dice, T-shirts, and artillery fire to anyone who wanted some. "Incoming!" proved popular, because it was well set up, and run, as well as providing an extra dimension to the experience it doesn't usually have: sound. 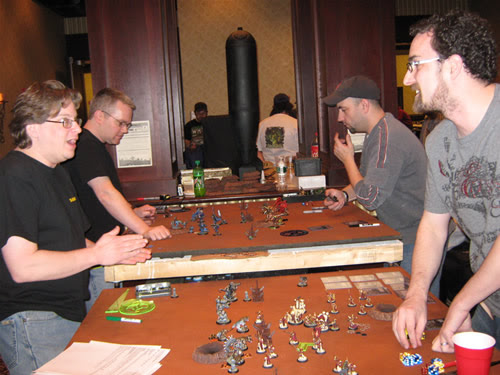 This is Tristan and George playing on the "Incoming!" table. Note the stacks of craters piled up at the base of the big, black bomb (they look like hamburger patties), just waiting to be used.

As always, many of the figures were gorgeously painted. I find that painting is an enjoyable aspect of the hobby, and it makes the force on the table look good. 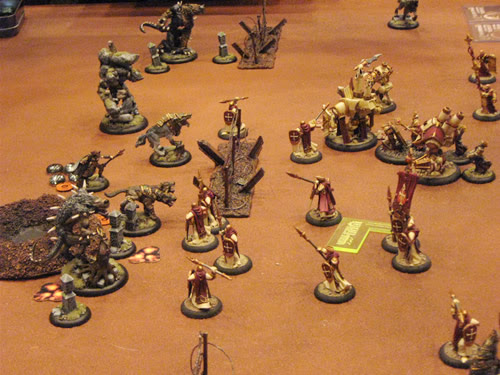 In order to attract a more diverse crowd, Templecon's theme this year was retro-futurism. Warmachine has long had a steampunk theme, and this year there were a fair number of steampunk costumers about. I regret missing the burlesque dancers.

I also spent time with writer C. J. Henderson. CJ has appeared in every notable anthology I've appeared in, and was writer guest of honor this year. We had some good chats; like me, he's deeply into Lovecraft, and even ran a Call of Cthulhu game (My character, predictably, was eaten).

So a good time, and I drank enough water to not get dehydrated in the dry motel air.

Posted by John Goodrich at 8:19 AM No comments:

Good Words on My Work

Anderson Feldt has a blog, pleasantly called Literary Vivisection. At the end of least year, he read and discussed Arkham Tales

He posts specific reactions to nine of the seventeen stories, including mine. His style is minimalist, but this may be my favorite discussion of “Arkham Rain” yet:

Hey Anderson, want a copy of Cthulhu Unbound?
Posted by John Goodrich at 4:22 PM No comments: