My goodness, it's been six months since I blogged. I didn't intend to stop, but the current work in progress is very consuming. As well as my Patreon. Once a week is a pretty serious schedule. In addition, the blog is not getting nearly as many hits as it used to, once I took down a post that was likely being used in some sort of spam scheme. My initial post about Kong: Skull Island received 444 hits since 3/11/17. The full DVD review, posted 10/15/17, has thus far received 90. And that's a little discouraging.

For those of you waiting for more essays about Swamp Creatures in the comics, I plan on more. The next essay for the Pasko-Yates Swamp Thing is about half way done. For those of you waiting for my discussions of Pacific Rim: Uprising, Rampage or, God help you, Altantic Rim: Resurrection, those are also coming. But it's more difficult to justify writing something that doesn't pay and doesn't get much exposure.

Something else that has come up is the publication of my collection of short stories. Here is is, Dark Draughts, available in e-book and paperback from the fine folks at Crossroad Press. Yes, that's a Stephen Bissette drawing. Dream one achieved: to have a book published. Dream two achieved: Have a cover by Stephen Bissette. I mean, the man was part of the comic that changed me in profound ways. So there's that. 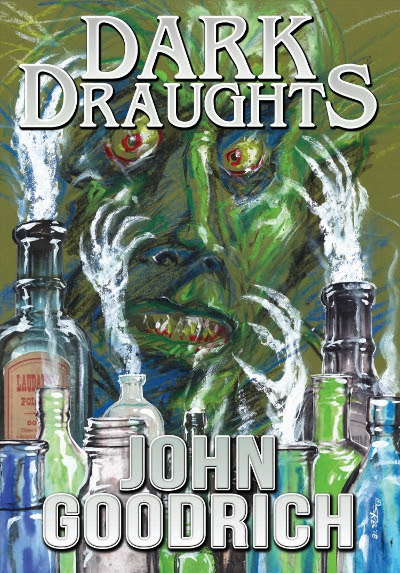 So there is more to come, and I will be posting to this blog more regularly.
Posted by John Goodrich at 9:08 PM No comments: