I missed by a day, but this is important. 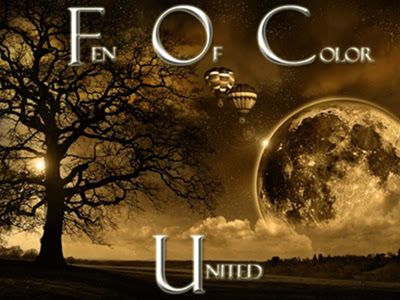 There has been a lot of discussion about race and race issues in science fiction. I've tried to ignore it because I didn't think it touched my writing. I have characters who are of color, as well as queer ones, sort of randomly sprinkled into my fiction, and I thought that was enough. And then I read this incredible essay by Nalo Hopkinson about her experience in science fiction. And I realized that I wasn't doing enough. The problem of the perception of race won't go away if people of good conscience ignore it, and worse, to do so myself is disrespectful to my friends.

Race and race relations need to be discussed. It can't be 'gotten over' and ignoring it has resulted in bad situations, oppression, and the belief that it will just go away. It won't always be pretty, and it hurts to realize that I've been going about this wrong. But this is more important than my hurt feelings.
Posted by John Goodrich at 8:31 AM No comments:

In what I hope will become a yearly tradition, Kim Paffenroth and I went to see the roller derby team that he sponsors, the Hudson Valley Horrors. This time I brought my camera and took some very bad photos. 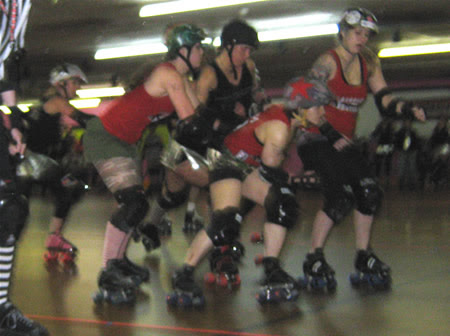 Roller Derby is interesting. There aren't a lot of non-sexualized contact sports for women out there, and watching them in an aggressive sport is fun. Because we know Kim, we're supporters of the Horrors, but Albany has its own team, the Department of Public Hurts. Slightly closer are the Hellions of Troy, who within easier reach than our own state's Green Mountain Derby Dames, who just finished their first season. 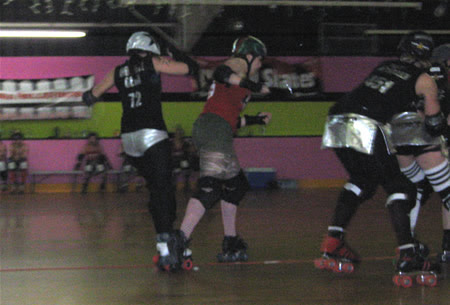 Game-wise, the Horrors got their collective assets handed to them by the extremely team-oriented Suburban Brawl. The Brawl had some impressive moves, including the team-mate sling, in which they would grab a teammate's hand and pull them ahead, giving them a momentum boost. They were also consistently faster off the mark than the horrors, and had pin-point accuracy in body-slamming the Jammer (the person who scores the points by lapping members of the other team) off her feet. Following my thought that Derby is more about treachery and teamwork than being young and fast, we're pretty sure the star player of the Brawl, Hard Core-Vette, was an original Disco dancing queen, a possibility reinforced by her victory dance on her final jam. 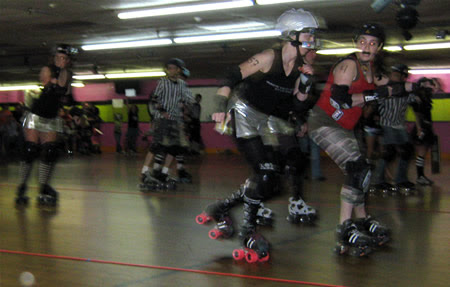 A good time as had by all, not the least because Kim is a lot of fun to talk to, and he signed the books I shoved under his nose without complaining. The punk sensibility of derby tickles me still. Who wouldn't be a fan of the New York Shock Exchange? Wrestling seems overhyped and over 'roided in comparison. Who cares about such dull names as Triple H when you can cheer for Ann Sane or Pinky Swears?

The Queen of Science has decided her 'derby name should be "Decked-Her Horrible."
Posted by John Goodrich at 7:53 AM No comments:

Two positive reviews for Cthulhu Unbound were added to Amazon on May 13th. One with four stars, and a five-star review by Matt Carpenter, reviewer of scores of Cthulhu Mythos collections.

Matt gives the anthology five stars, and, as is his wont, reviews each story individually. In the beginning of the review, Mr. Carpenter states that I pushed Permuted Press to send him a reviewer's copy. I did, but they weren't that difficult to convince. Mr. Carpenter likes Cthulhu anthologies, and he seldom gets much thanks for posting his extensive reviews. I thought it was time to give a little back. Anyway, here's the important part of his review:

“The Patriot” by John Goodrich - Mr. Goodrich has a story in the upcoming Cthulhu’s Dark Cults from Chaosium but otherwise I am uncertain about his publication history. This is a ghoulish yarn set in WWI, reminding me a little bit of Curran’s “The Chattering of Tiny Teeth” from the book Warfear. On its own merits this was a very creepy and well written piece that I enjoyed until the end...and the denouement just blew me away, it was so good!


There's also this story-by-story review by Episkopses Vulpine the XXIII which is fairly positive overall ("The collection was alright, while there wasn't any one story that made me go all squamous with glee, neither were there too many clunkers."). Here's what he had to say about mine:

'THe Patriot' by John Goodrich set the stage in WW I and No Man's Land. Why France has been very good to the ghoulishly inclined. Another rather good story.

I'll take that.
Posted by John Goodrich at 8:18 AM No comments:

We picked up the entire run of the X-Files. All nine seasons and the movie (lacking the second film, but we're not much bothered), for about thirty dollars more than we paid for a single season, back when they first came out.

Nothing else typifies the nineties as much as this show. We watched the first two episodes last night, and it brought back a lot of memories. I look forward to watching the seasons pass, and watching the cellphones shrink as the show goes on.
Posted by John Goodrich at 7:22 AM No comments:

Fallen to the Dark Side

I always wondered how it was that Warhammer players ended up with three of four armies. I mean, isn't it difficult enough to really get one army down pat and play that particularly well? Apparently it isn't.

And now I know. Because I bought a few tyranid models, specifically because I wanted a force that looks like 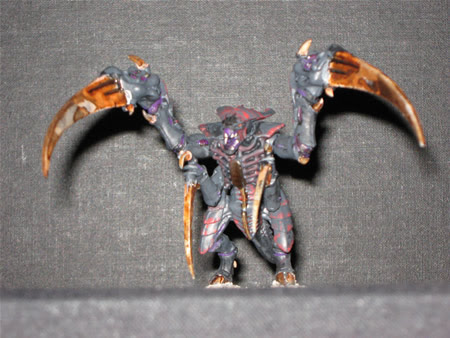 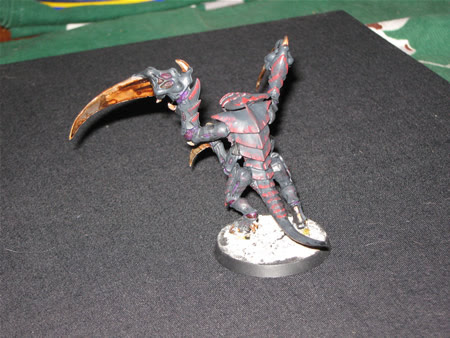 Why these colors? Because when I was watching Godzilla vs. Destoroyah, I thought to myself... "Tyranids would look great in that color scheme. I know I haven't fully succeeded, the skin coat needs to be darker, more charcoal than the light gray it is. But I'm quite pleased with the red highlights, though. Here's a screen cap of Destoroyah for comparison: 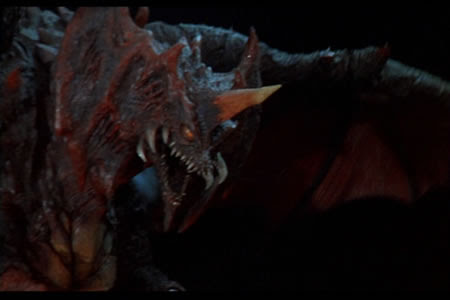 Posted by John Goodrich at 9:18 PM No comments: