"I don't discuss my process"

I feel like discussing the genesis of a story today. I always think that my stories are easily guessed, the low-hanging-fruit plots that anyone could come up with given ten minutes of thought on a theme. But it doesn't seem to be that way. I've gotten praise for my unusual stories, sometimes from editors, so apparently, my though process is unusual enough that I can sell stories based on it.

I want to be in a werewolf anthology. I don't seek out werewolf stories. There's much more interest in the other parts of the Universal Horror tradition. The werewolf tends to be a serial killer with a big furry coat, a Jeckyl and Hyde persona. An easy metaphor for the rage and anger we all keep bottled up. 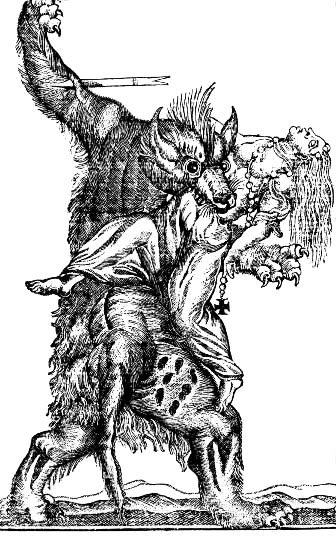 First with the negative. I don't want this to be a 'spot the werewolf' story. We think the unfeeling brute in the story is the werewolf, and OOOH THE SURPRISE it's the meek little person who turns out to have been bullied and gets their unexpected revenge. Nor do I want this to be a story the lionizes the werewolf. While I write stories that involve violence, at the same time, I try not to present it as a way to solve problems. I prefer it to be a symptom of sickness, rather than something cool to do. Oh, and no silver. Silver was introduced in the 20th century, so I'm going to leave it out.

What I do want: a flourish of originality, and something touching on authentic folklore. Europe tends to have the richest werewolf tradition, so I think I'll go with those. And France. I want to set it in France. Probably because I enjoyed Brotherhood of the Wolf, but also because the wolf was wiped out in England in Medieval times, I tend to associate wolves and werewolves with France. I also want wolves, and wolf behavior. And it turns out that there's a strong association of werewolves with cannibalism, so I think that'll go into the plot.

So it's off to Wikipedia. As Wikipedia grows, it has a lot of links to specific instances and references. For example, you can find this entry in the werewolf entry linked to above:

A notable exception to the association of Lycanthropy and the Devil, comes from a rare and lesser known account of an 80-year-old man named Thiess. In 1692, in Jurgenburg, Livonia, Thiess testified under oath that he and other werewolves were the Hounds of God. He claimed they were warriors who went down into hell to do battle with witches and demons. Their efforts ensured that the Devil and his minions did not carry off the grain from local failed crops down to hell. Thiess was steadfast in his assertions, claiming that werewolves in Germany and Russia also did battle with the devil's minions in their own versions of hell, and insisted that when werewolves died, their souls were welcomed into heaven as reward for their service. Thiess was ultimately sentenced to ten lashes for Idolatry and superstitious belief.

That reminds me of an Italian society of dreamers I've read about in Ken Hite's Dubious Shards; the Benandanti, a group of Medieval Italian mystics who fought the Devil in their dreams. I also remember something about the winter of 1450, when the Seine froze, and wolves got into the walled city of Paris. They were eventually wiped out on the steps of Notre Dame. That Wikipedia entry also includes a link to Werewolf Witch trials, which happened in Estonia, where many witches were also werewolves. It was a long, very cold winter, with a poor harvest before it, so the winter of 1450 sounds like an excellent time to set a story about starvation.

So to make a small, possibly credible link with the Benandanti, I'll move the story to the Franco-Italian border, which was at the time in the hands of the Holy Roman Empire, a political entity I tend to forget about since it's not modern. With a little work from Wikipedia and Google Maps, I decide I'm going to put it in the Duchy of Savoy, the capital of which is Chambéry, and the Duke around 1450 is Louis. And that kind of research is a lot of fun. Another hour on Google Maps, and I'll have the very village the story takes place in.

In his Finishing the Hat Stephen Sondheim says that one of his guiding principles is that "God is in the details." Well the man writes some beautiful words, so I'm going to take him at his word and be very picky with my details. It gives me a background to hang the story on, allowing me to make casual mention of the Duke Louis, and Fredrick III is the Emperor (elect only, because he wasn't crowned by the Pope until 1452, but this was apparently just a formality). These details create an air of authenticity, even as I pick and choose my regional werewolf legends.

I don't want to make the werewolf sympathetic per se, but I do want to make them (I don't know what sex it's going to be yet) complex. Complex characters are always somewhat sympathetic because we understand them, and respond to the care used to create them. And because I want to use the cannibalism angle; it's difficult to make people like a cannibal, but I'm always up for a challenge.

So I've got this enormous pot of details and wants and not-wants, but you can see how the details are going to shape the story. And things may change. If I write myself into a corner, I may have to alter any or even all of these details to create a successful story, but as I progress as a writer, the need to change the story once I've started it is less.

And there you have it; the initial steps in the creation of the story I'm currently writing. Now to get to the difficult part of writing it.

Have I Told You to Buy My Stuff Lately?

I always feel funny telling people to buy my work. What I prefer is that other people do it for me.

Let's take Rod MacDonald's review of Andromeda Spaceways InFlight Magazine for SFcrowsnest.com. If you're too lazy to click the link, I've copied and pasted the important bit below:

David Conyers and John Goodrich are the joint authors of ‘The Masked Messenger’ which features Harrison Peel in another Cthulhu Mythos story. The agent is in Morocco to investigate strange deaths where people end up being cut into thousands of pieces. Is this a conventional terrorist act or is it an act of a cult belonging to the Masked Messenger? There is a strange book, centuries old, which contains deadly secrets and there is also a portal in the Sahara Desert which leads on to another world completely different from our own. An excellent tale full of suspense and action, it's worth purchasing the magazine for this alone.

Rod seems like an excellent fellow. I think it's entirely worthwhile to follow his advice and purchase a PDF copy. I mean, I wouldn't want to be accused of ignoring Rod's advice.

Posted by John Goodrich at 9:54 AM No comments:

I've recently read and reviewed Ross Lockhart's The Book of Cthulhu. It's a really good anthology, and more than that, an inspiring one. There are so many extraordinary, well-crafted stories in it that I wanted to make my next story to be good enough to warrant inclusion. Could I write a story that could follow "The Oram County Whoosit" and not embarrass myself?

I don't know. I don't think so... yet. But I'm revising the story that I've said that about, and I think it's better than anything I've yet written. According to my initial review group, it shares the strengths of the majority of my work; strong characterization, and a good fight scene. I think it has more description and atmosphere that my work up to now.

It's been a long, hard slog. Between classes and work, I've had to assemble the story bit by bit, and that often makes scenes and events inconsistent. And writing style can vary from day to day, depending on mood and the events of the day. The protagonist is also a huge variation from my usual, as well as being set in the near future of a city I've never been to. In early writing classes, they say you should write what you know, but there comes a time when you run out of parts of your life to mine. And I can either continue to dig up my life's shallow grave, or I can strike out and try someone who has very little in common with me. Let's hope this character comes out as strong as I hope she does.

There's also a lack of exposition in this story, which may not be the best approach because it's set in the near future, and there's a lot of technology out there that isn't familiar to the reader. But the characters in the story wouldn't talk about that technology any more than you or I would talk about how our cell phones work. We use them when they work, curse at them when they don't.

I think it's a step up in terms of the quality of my writing. I'll ask what you as readers think if it gets sold and if you read it.

Posted by John Goodrich at 7:36 PM No comments: