Mamas Don't Let Your Babies Grow Up To Be Media Properties

Yesterday, I picked up Hellblazer #300.   The final issue.

I'm sad.  John Constantine, the archetypal Sweary British Mage, has been a fixture for more than half of my life.  I've got more comics featuring the character than I can comfortably lift.  The most popular section of my website is dedicated to John Constantine. And now he's gone, subsumed into a younger, blander version of himself without any sort of ties to the culture that he grew up in.

That's the John Constantine in the DCUniverse, the new 52.  He's younger and nobs around with Zatanna, the Phantom Stranger, Frankenstein's creature.  But he's not much of a character.  Original John Constantine was rooted in the punk of the 70's and 80's.  He was a member of a spectacularly failed band (Mucous Membrane).  This gave him a center, a starting point.  His disrespect for authority, his iconoclasm and cynicism made perfect sense, because I understood the movement he came from, the zeitgeist from which he was born.  The desperate 70's were his formative years.

This depth came from the minds of Alan Moore, Steve Bissette, Rick Veitch and John Totleben.  They looked around and created a character that was from their time.  And people responded to John Constantine.  He was something new--a working-class mage.  Until Constantine, comics magic weilders have been remote mages, men with towers, women with witches terrible powers.  John was different.  He was a magical mechanic, not getting involved in the ritual of magic, but doing the necessary things in order to get the desired result.  If the words are the thing, then why not just say them, rather than intoning them?  Was a copper-inlaid pentacle really necessary, or would a quick chalk one on a linoleum floor be just as useful?  This practical approach was unique, stripping away the mysticism and obfuscation, as well as the overblown speeches.  Dr. Strange has all sorts of charms and talismans, the Specter is the Veneance of God, Dr. Fate channels the power of whichever Egyptian god through his helmet, the Phantom Stanger has some strange origin story.  John as none of these.  He wasn't a doctor, a mystic, or Judas.  He was a self-made sorcerer who got into magic as a way to impress the girls.  He came from a poor family, ran away when he was 16.  Never went to college.

As such, he was always an iconoclast, and a smart one.  He has never been a hero, because heroes do the right thing.  John was a ruthless bastard who looked at the big picture and kept his eye on it, often at a personal cost, or to the cost of a friend.  That said, what he did always needed doing.  And after the price was paid, he usually got drunk.  We've even seem him cry a time or two.  Constantine was that small person who moved the wheels of the world because they had to.  Not because they were getting fame or glory.  He was easy to relate to, because he wore his faults and vices on his sleeve.  He smoked, he drank, he cursed. All of these motions and emotions made him human, someone I could relate to.

He changed as different writers wrote him differently.  Jamie Delano's Constantine was very different from Garth Ennis's Irish Rebel, Mike Carey's masterful manipulator.  All these were different and yet recognizeable as the same person.  But there were some authors who didn't get it, who didn't understand the point of planting your feet, and flipping off God, the Devil, and the police simply because it needed to be done.  And ultimately, this was Constantine's downfall.

Because Constantine was a media property.  The media he appeared in was produced on a deadline, and that had to be hit, whether the writer had a good idea or not.  And since the creators weren't willing to write him for more than a decade, the chore had to be passed on to someone else.  And so there were John stories that were from individuals who didn't really understand what he was about.  Certainly the film that used the Constantine name was pretty clueless.  As, sadly, was the last man to write the comic.  But that's what happens when a character is a media property.

And so one of my favorite favoirte media properties flicks his ciggie into the bushes and heads out for Pubs Unknown.  There's going to be a hole in my life for a while.  But I'll always have those brilliant issues, and when I want, I can open up a box of comics and visit the good old days.
Posted by John Goodrich at 1:28 PM No comments:

My Pathfinder game is coming along nicely.  The PCs are living and working in Osirion, the Ancient Egypt analog of the Inner Sea.  They're doing a lot of tomb raiding, and I'm getting working my font wonkery out by fancying up the messages they find on the walls and in the messages they get sent.

RPGs are more a performance art than anything else.  A session is dull unless you're involved, and it happens in the moment.  And because I want a larger audience for my work, I'm sharing these pieces of ephemera with my readers.  And because my blog posts seem to get more hits when I post a lot of images.

I won't say they're beautiful props.  But I am enjoying the creation process.

First, a sad note from someone trapped in a tomb, from Goodman Games' quite wonderful Malice of the Medusa.  I used GIMPshop's oilify tool to make the ink spread a little.  It looks older, and is difficult to read.  My players were able to puzzle it out, and I think the difficulty made them a) irritated but b) more invested in the narrative, because they had to work on it. 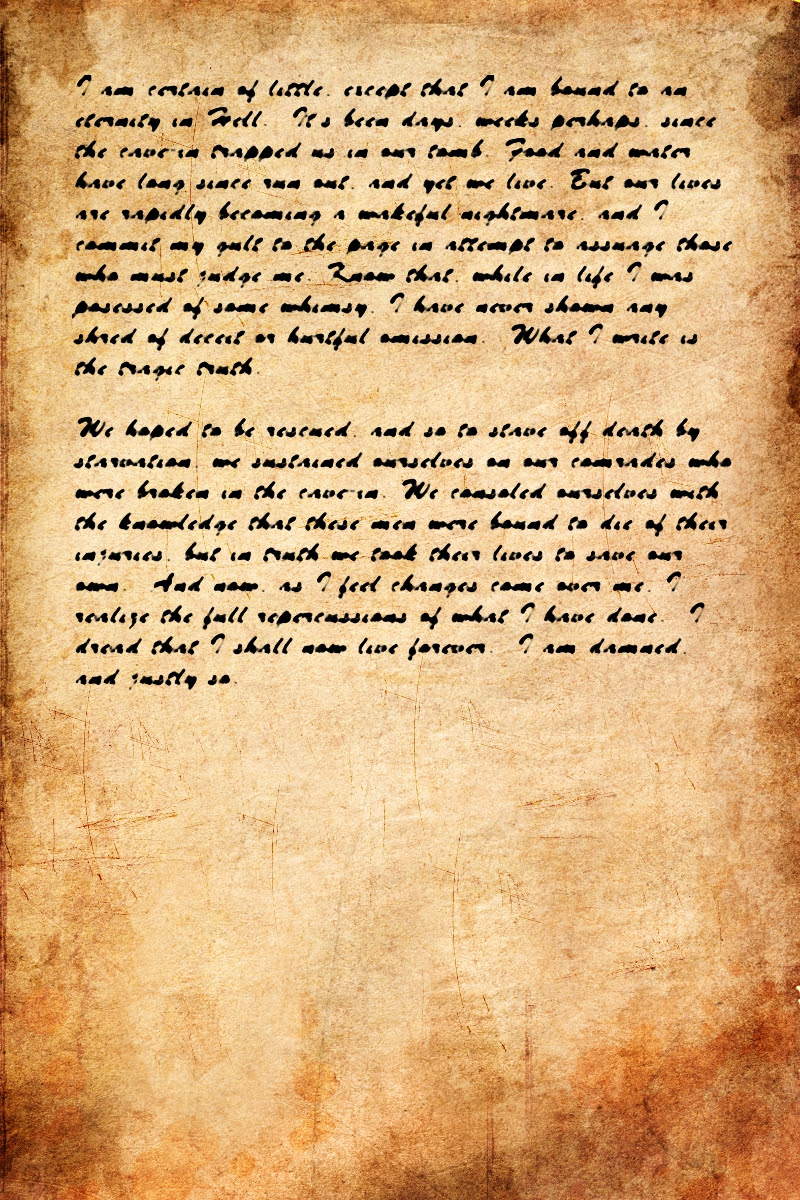 The 1st edition adventure Pharaoh is one of the most entertaining I have yet run.  For some background, check out the wikipedia entry. 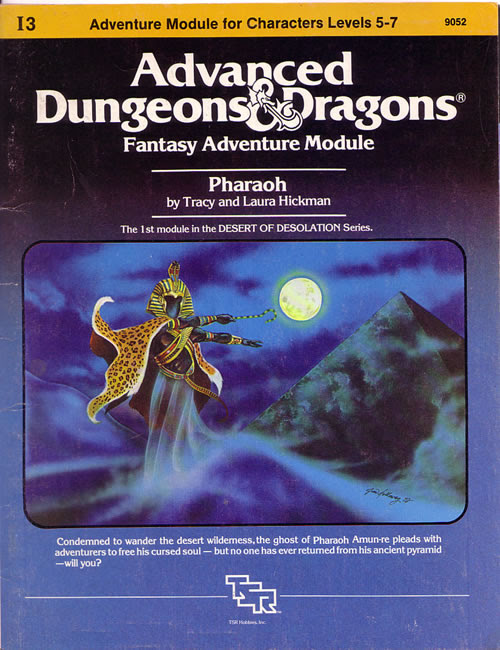 Pharaoh is a long-cherished treasure in my collection, one of the reasons that I decided to run a campaign based primarily in Osirion.  After some twenty years, I finally got to run the adventure, and it was delightful.  There's also a lot of text to be 'read aloud' to the players, which easily converted into documents to be fonted up.

Instead of just placing the words onto a sandstone background, I also copied the text into a hieroglyphic format, faded it so it wouldn't overwhelm the English text (I love layers).  This allows me to have my cake, readable text, and still have Egyptian Hieroglyphics.  I did this for the majority of the Pharaoh documents. 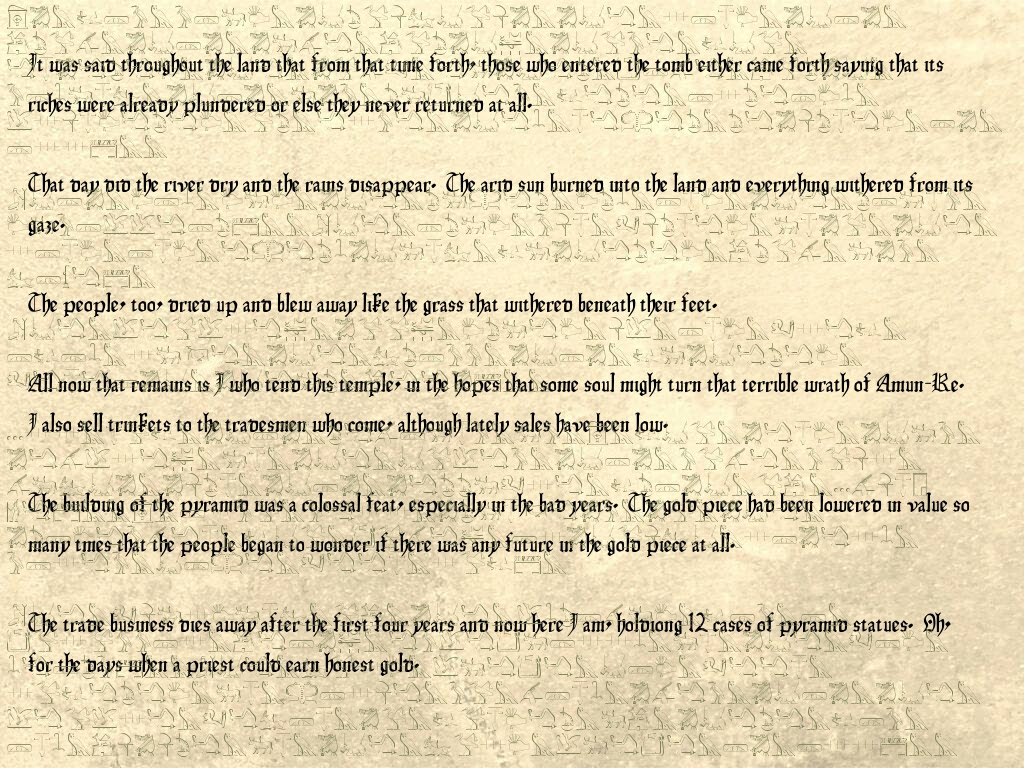 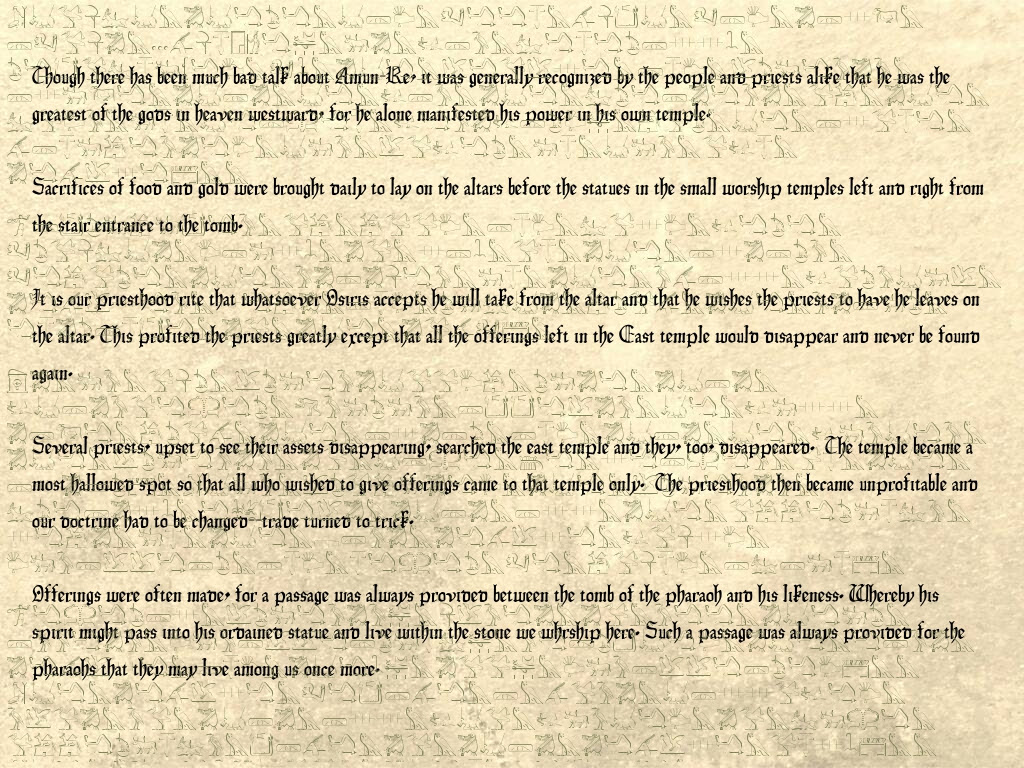 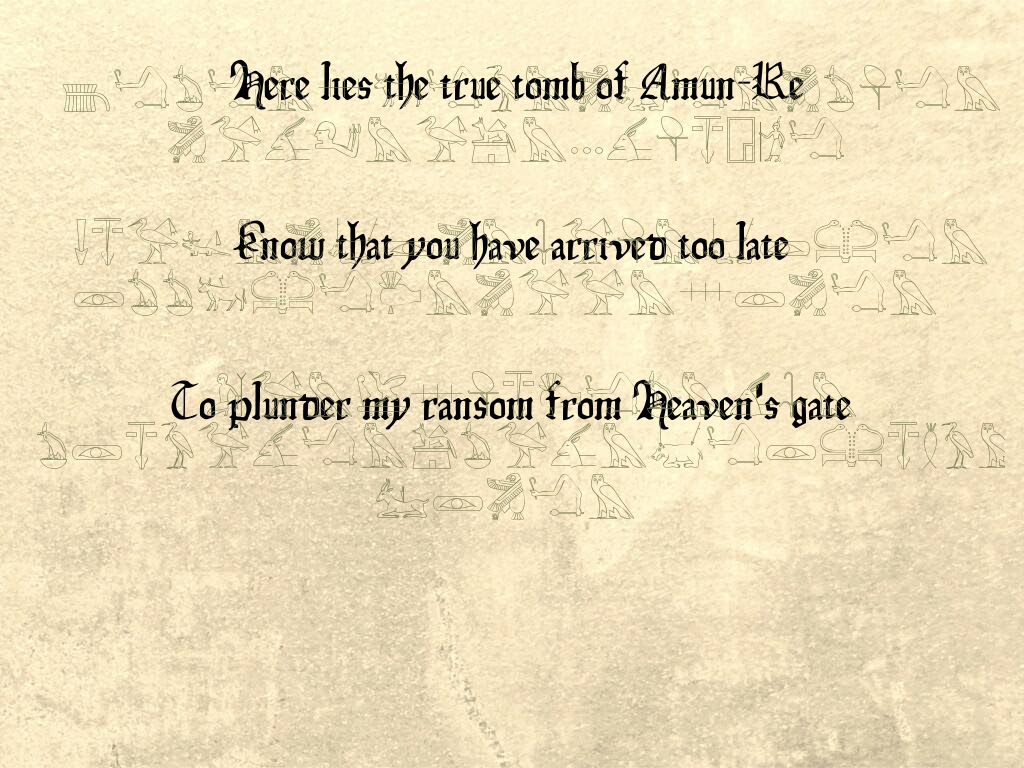 Of course, anyone who read this knew it wasn't true. 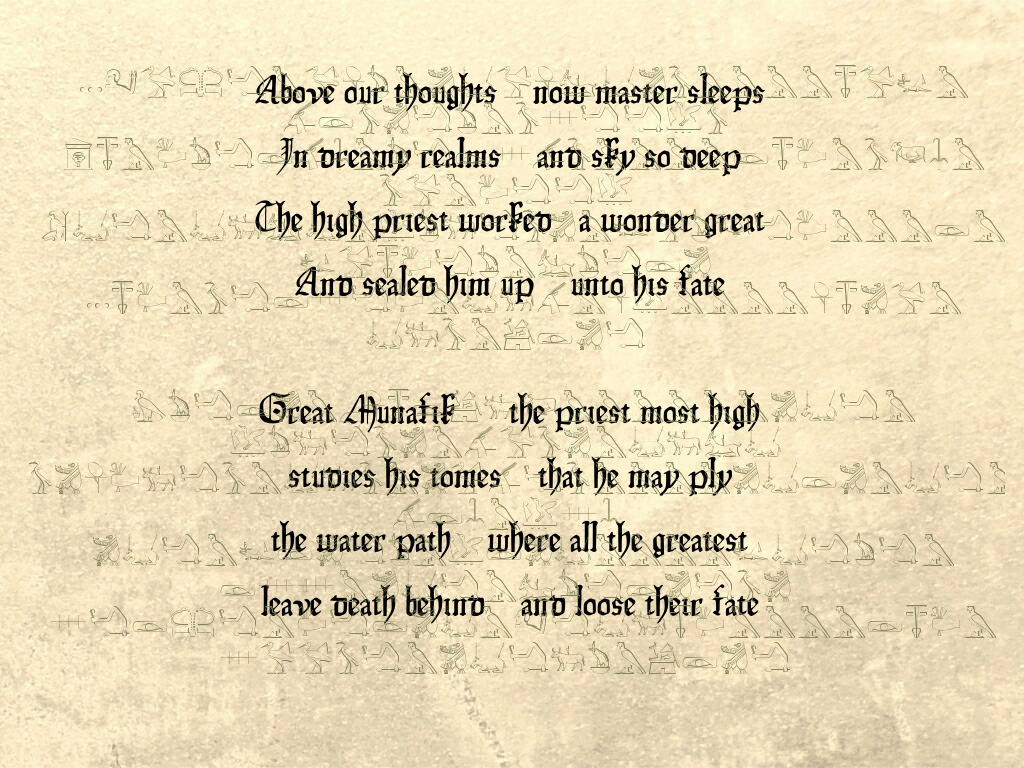 The unrobbable tomf of Amun-Ra was no ordinary trapped tomb, let me tell you.  There was a lot of backstory, which is part of the reason there was so much text.  Lucky for the adventurers, the individuals involved were obsessive chroniclers. 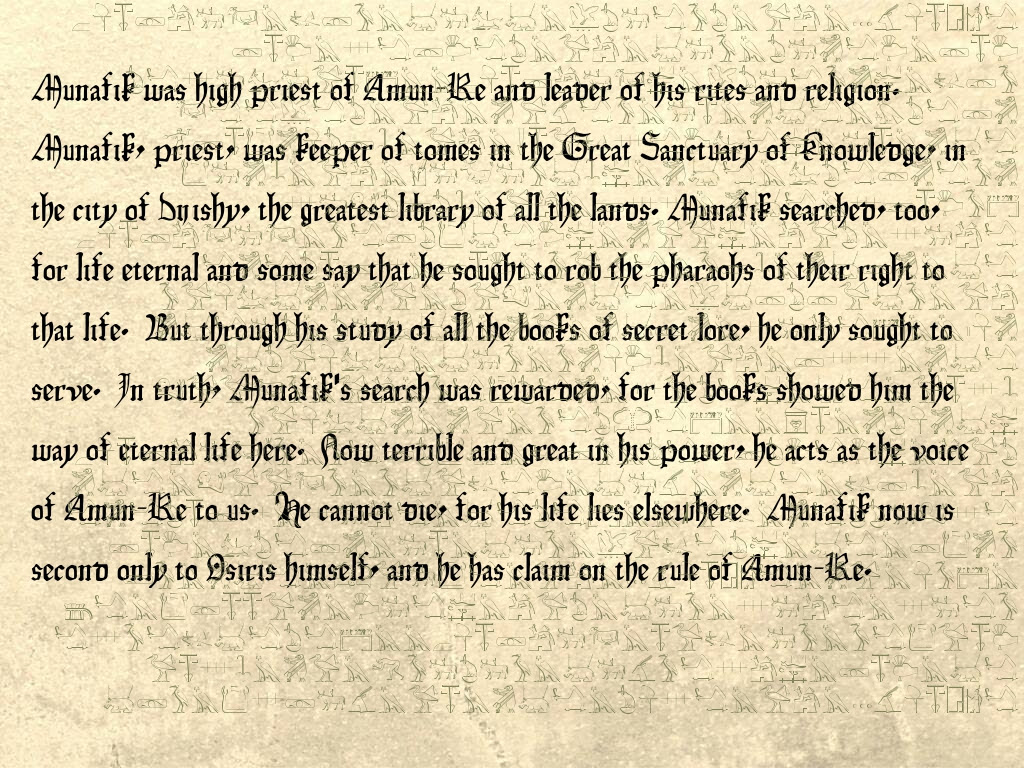 The players never did get the High Priests's name "Munafik" right.  But that didn't bother me, and  they never managed to ask him.

And in case you didn't think the builders of Amun-Ra's tomb were jerks.  Here they reach out to the party members from 4,000 years ago and thumb their noses at them.  I love those guys. 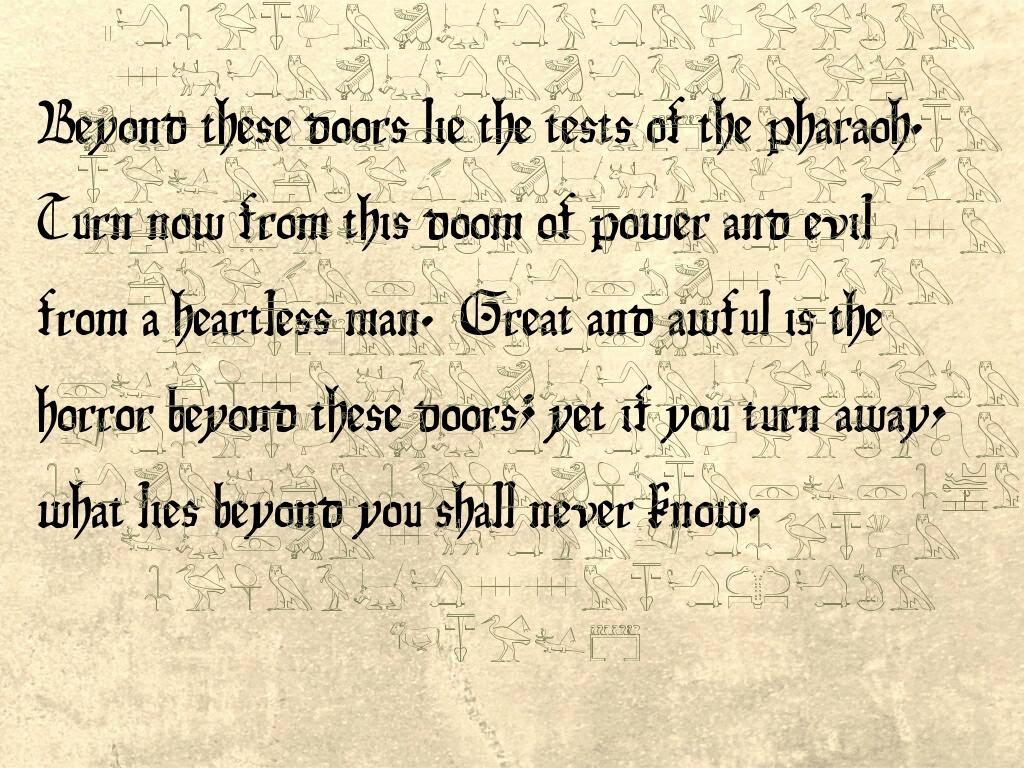 Here we start a series of documents that are the Pharaoh Amun-Ra's personal chronicle.  I really liked this; it gave the villain of the piece a motivation, and made the guy who built the trap-proof tomb a heart.  He's not a particularly good person, but he's understandable, rather than just eeeevil.  I've altered it a bit here and there to fit into my campaign.  I would have liked to put this on one, long scroll, but I didn't have the printing technology available.  Still, these were a load of fun to make. 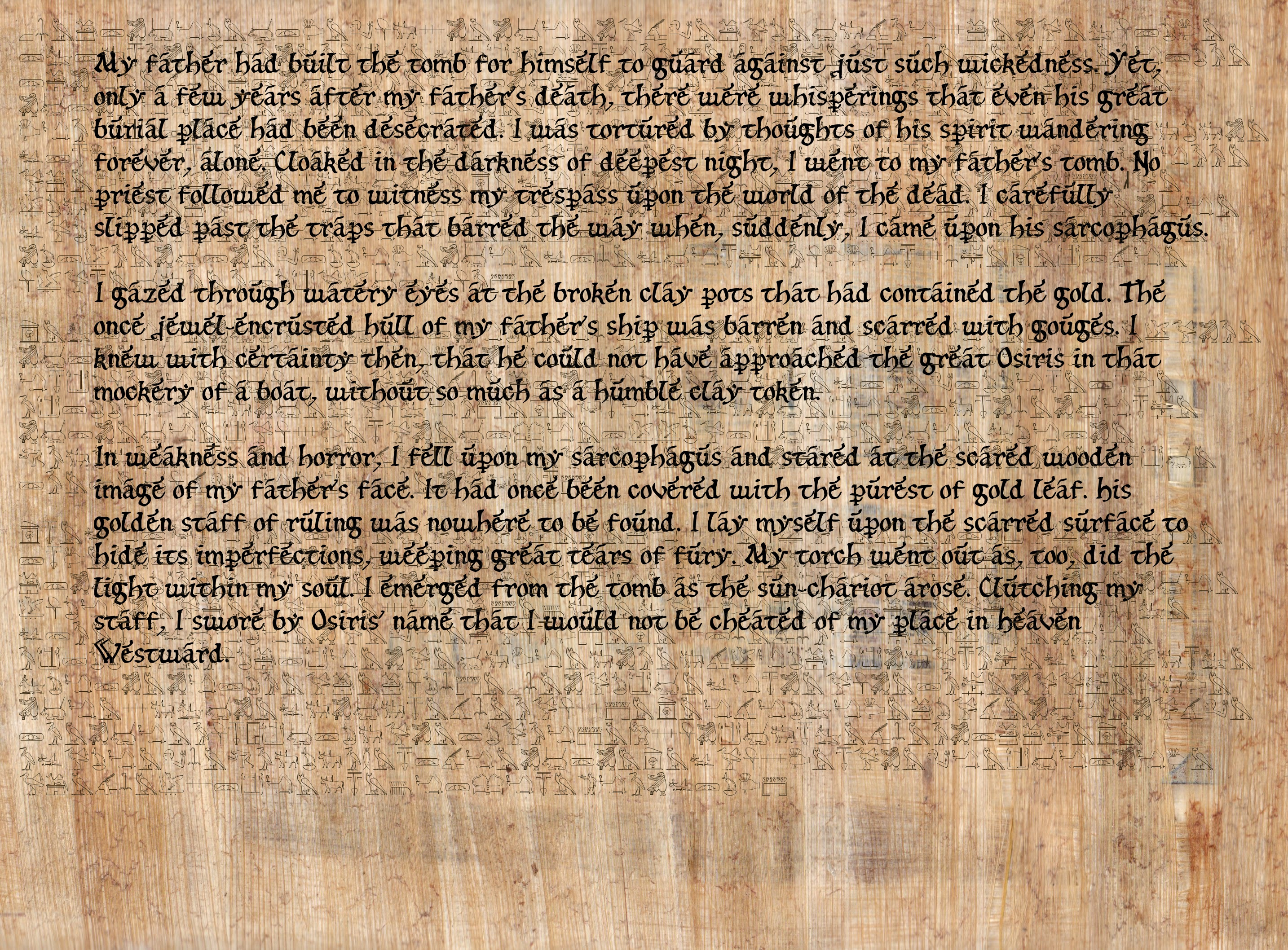 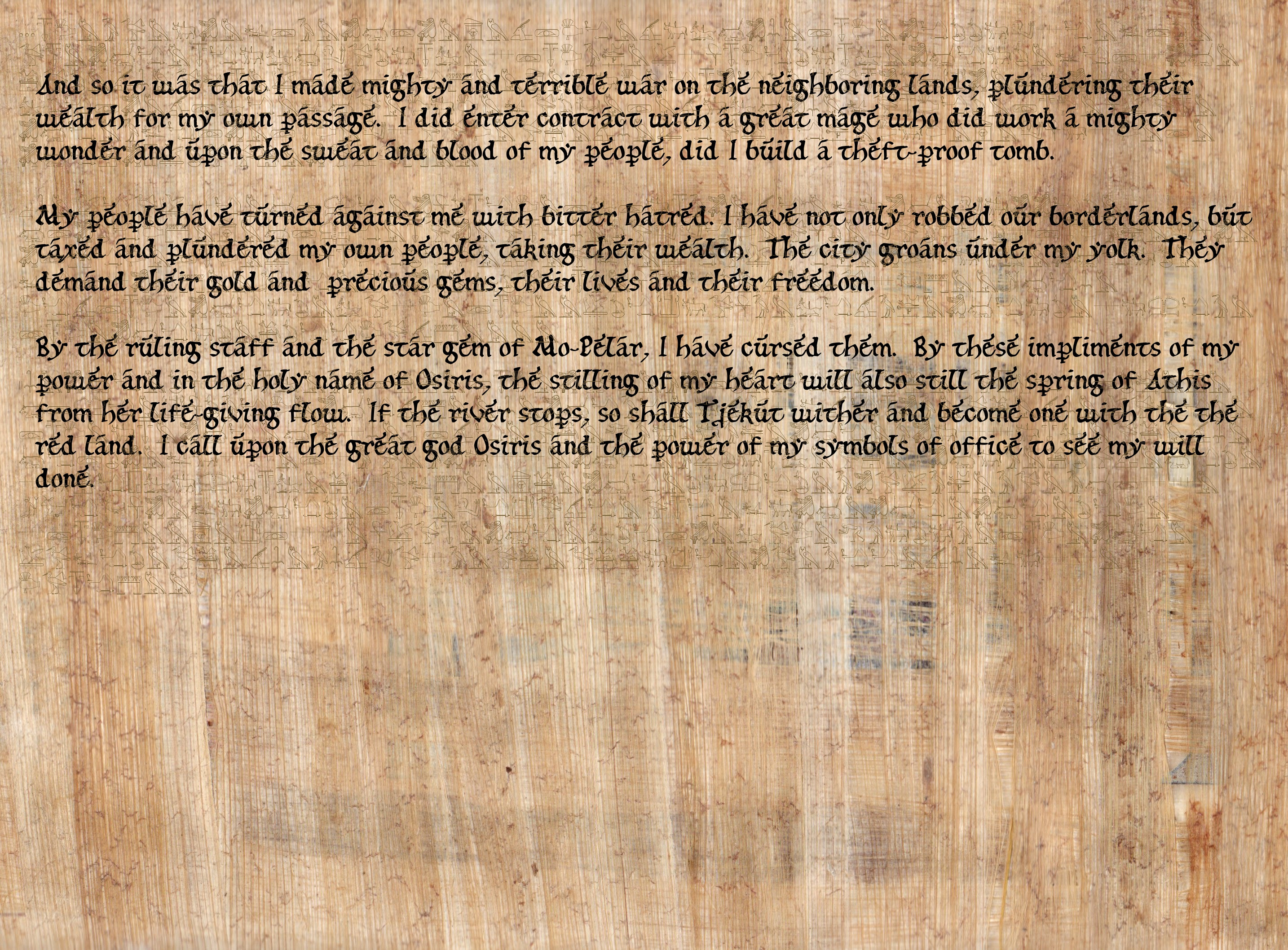 Later, I again turned to Goodman Games, this time plundering their In Search Of Adventure for an adventure of an avatar of the Scorpion Queen.  The adventure doesn't contain a lot of flavor, so I made it up myself.  Dire warnings and all that.  The top is a little muddled because of the darkness of the sandstone and the hieroglyphic text.  But the reading wasn't essential, so I let them struggle a bit. 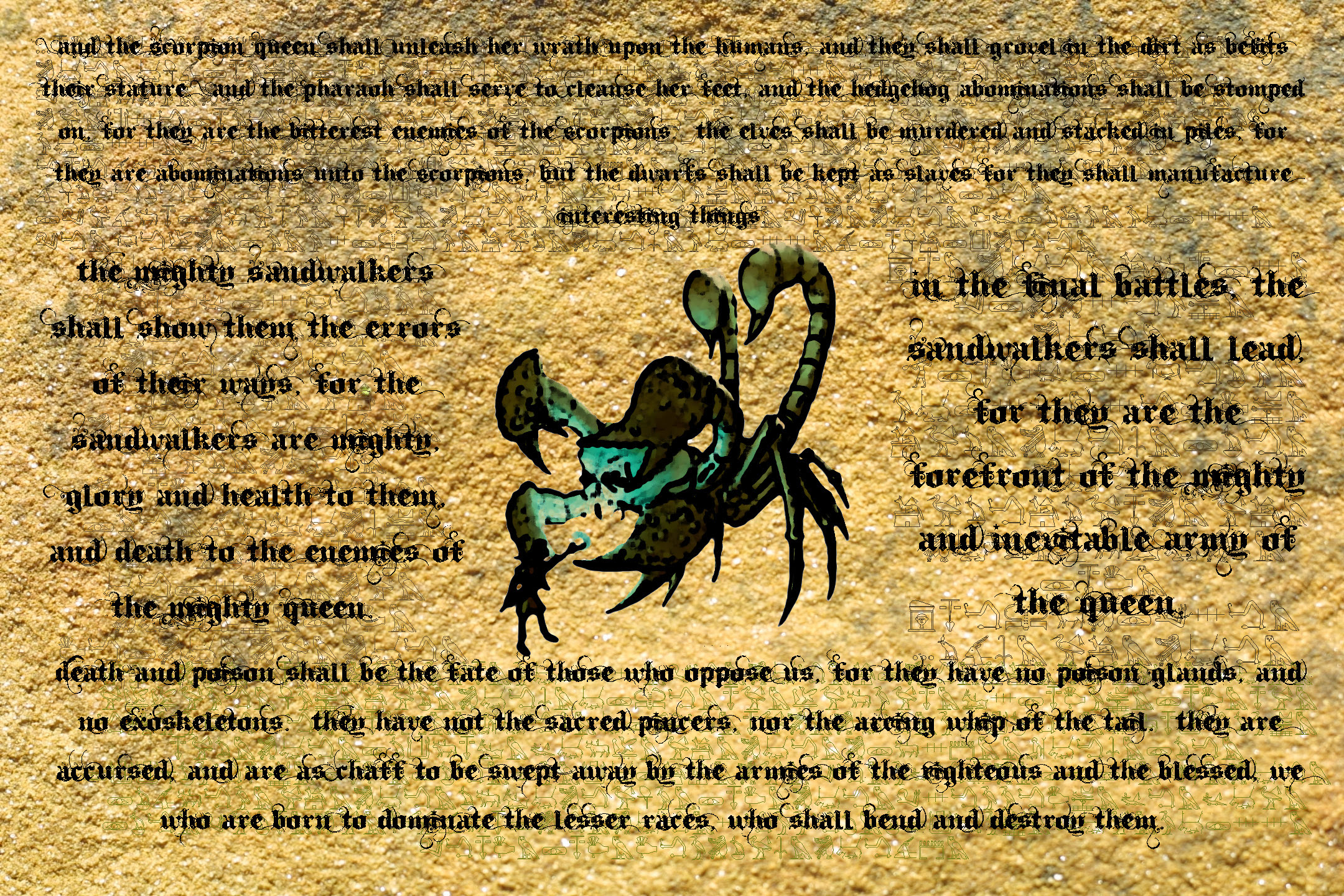 The picture is a Sandwalker from Kobold Quarterly #7 (which is quite worth picking up).  Great picture, which I mucked with to make it look more like a carving with a hint of color.  The real illustration is much more detailed and pants-shittingly terrifying.
Posted by John Goodrich at 1:09 PM 1 comment:

Why Monster Movies Are Not All The Same

I'm a Godzilla fan.  I make no apologies.  I enjoyed David Kalat's Critical History and Filmography of Toho's Godzilla Series because I think just about any sort of entertainment that stands up to being taken apart has worth.

I've just watched Godzilla vs King Ghidorah for, I think, the third time.  It's not one of the great Godzilla films, and that's partially because there's so much of the human plot going on.  The fights are dissappointingly short.

When the monster is the draw of the film, that monster should be front and center.  When I buy a Godzilla film, I'm buying it for the Godzilla action.  I want to see Godzilla blasting away at giant monsters in the middle of a city that's getting massively trashed.  Some monster films, and I'll pick zombie films as an example, aren't really about the monsters.  Night of the Living Dead was not so much about zombies, as it was people under pressure.  And that's how a zombie film should be.  As a monster, zombies aren't that interesting, unless they're given a twist.  They're just dead people.  They're interesting in the fear they produce in living people, and how people react in difficult circumstances, similar to the now little-seen disaster film.

Big monster films, in which the monster is usually in the title, are about the monster.  Godzilla, for example. The actions of the humans should revolve around the monsters.  This was, in part, a major failing of the American Godzilla.  The audience came to see a monster film.  Instead, they got a number of small personal dramas that had nothing to do with the monster.  Which could have been fascinating (but wasn't), but I wanted to see the monster.  And while the monster sequences, whether suit animated or CG, are expensive, they're what bring the audience in.  Why was GMK: Giant Monsters All-Out Attack the highest grossing film of the Millennium series?  Because the last half hour of the film is devoted to the monster battle.  Godzilla is shown kicking the shit out of monsters, buildings, and the military.  In few other films is he portrayed as so relentless, monstrous, or invulnerable.

The only film to succesfully straddle these two approaches, to balance the monster with the human drama is The Host.  This was hugely successful due in part to director Bong Joon-ho's decision to make his film more a drama with monster than a film about a monster.

Posted by John Goodrich at 4:03 PM No comments: