I’ve been reading Leonard Wolf’s Annotated Frankenstein, which includes a number of authors, from Brian Aldiss to Robert Bloch to Joyce Carol Oates, discussing their impressions of Frankenstein. Many bring up the inescapable legacy of James Whale and Boris Karloff. Although I’ve seen images from the film, I hadn’t seen it until very recently. My first experience was the book; the 1983 Frankenstein with Bernie Wrightson’s illustrations. And reading Wolf’s text and annotations, I realize how lucky I am. Karloff’s grunting, lurching creature has little of Shelley’s powerful, neglected child so full of questions and desperate to be loved. 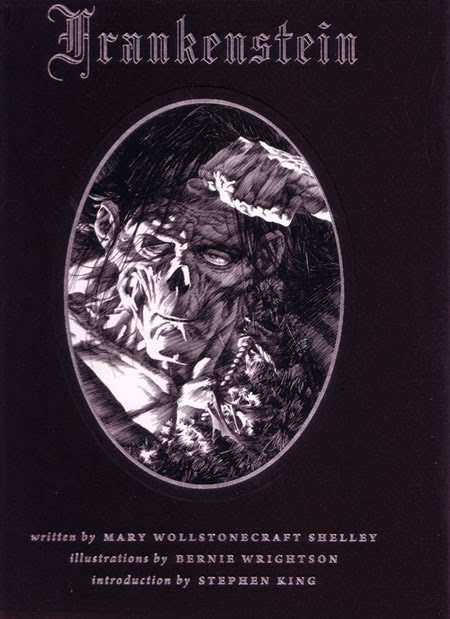 When I was eight or so, I got my hands on a couple of issues of the Len Wein-Bernie Wrightson Swamp Thing, and I was just astonished, not just with the stories, but the moody art. Six years later, when I saw that same Bernie Wrightson had illustrated one of the Classic Horror Novels of All Time, how could teenaged me resist?

Wrightson read the story, and without any sort of makeup or special effects budget to hold him back, created a vision of the creature that was true to the book; enormous and hideous, but at the same time, tragic and sympathetic. Shelley’s description of the creature is vague, and in any translation into a visual media, the artist has a great deal of latitude. Wrightson has paid attention to what Shelley did tell us, and builds on what seems like a contradictory set of instructions.

Wrightson does not cherry-pick only the most dramatic illustrations. Although he does point out the moments of high drama, such as Victor’s destruction of his second creation, he also chooses Alpine landscapes, serene moments on a boat, and Victor in his laboratory, reading. In this, he encompasses the book from end to end. It is the masterful execution of the illustrations that makes them important and relevant to the reader, not merely that they are dramatically interesting points in the novel. And that approach takes a lot of confidence in an illustrator. Anyone can be inspired by the creature’s fury or Victor’s pathos when Elizabeth is murdered. But Wrightson is inspired by all the novel, from Walton’s icebound ship to the shores of Ireland.

The original edition of this was published by Marvel in 1983, with an introduction by Stephen King. King and Wrightson had worked together on Creepshow, and also on Cycle of the Werewolf, also published in 1983. Unlike much of King’s other work, I like this introduction. King discusses a few important aspects of the book, how he had to read it because he was going to teach it, and discovered what he’d remembered as a dusty old book was really quite wonderful. The essay is, dare I say it, a sweet love note to a book that waited patiently for him to be able to understand it.

Obviously, copies of Frankenstein, even illustrated ones, are easy to come by. This one, to me, is very special. I hope it’s not just because it’s my childhood Frankenstein, but because Wrightson’s art remains so evocative. This 2008 Dark Horse volume is MSRP $30. And that’s pretty hefty, even including all the production value; it’s a 9x12 clothbound hardcover with a bound-in bookmark, and high-quality paper. It’s heavy, for such a small novella, although it has been padded a bit; the lines are double-spaced, and the reverse of each illustration is not used for print. But the illustrations are enormous, finely-reproduced, and well worth the time to examine them in detail
Posted by John Goodrich at 9:23 AM No comments:

I submitted a story today. It's a good story, one I've been working on for two months, and I think should go well with the anthology's theme. It's been nearly two hours since I submitted, and I'm anxiously checking my email to see if the editors liked it. This is silly. They'll take some time, probably a month, since the deadline isn't until the 31st of this month. And so I do what all writers do, move on to the next story (the werewolf one in this case). And try to put the waiting out of my mind. But what I'm really doing? Is waiting.


And waiting
Posted by John Goodrich at 5:18 PM No comments: