It is terribly jarring to go from Daimajin to Pacific Rim. Pacific Rim, made some forty-five years later, assumes a greater complexity and sophistication of the film audience. The details are far more rich, and this is only partially because of the massive amount of money spend on Pacific Rim. I probably shouldn't start dissecting the film until after I've watched all del Toro's commentary and really boned up on the special features, but maybe that'll be another blog post for another day.

What is certain is that del Toro knows, and loves, Kaiju films. In the first minute of voiceover, we find that the kaiju of the film are coming from the ocean, just as Godzilla does, as well as the Beast from 20,000 Fathoms, which swims to New York after being awakened in the Arctic. Oceans cover the mjority of the Earth, and they represent a dangerous, changeable, and remote environment. Of course gigantic monsters would come from there. At the end of most Godzilla films, Godzilla goes out to sea, where even he can be undetectable. Pacific Rim tells us that a portal opened up in the Pacific, which is the perfect reason that all the countries around the Pacific should band together to fight the kaiju that are randomly attacking cities (I would have liked to see a Chilean Jaeger, but perhaps in the sequel). 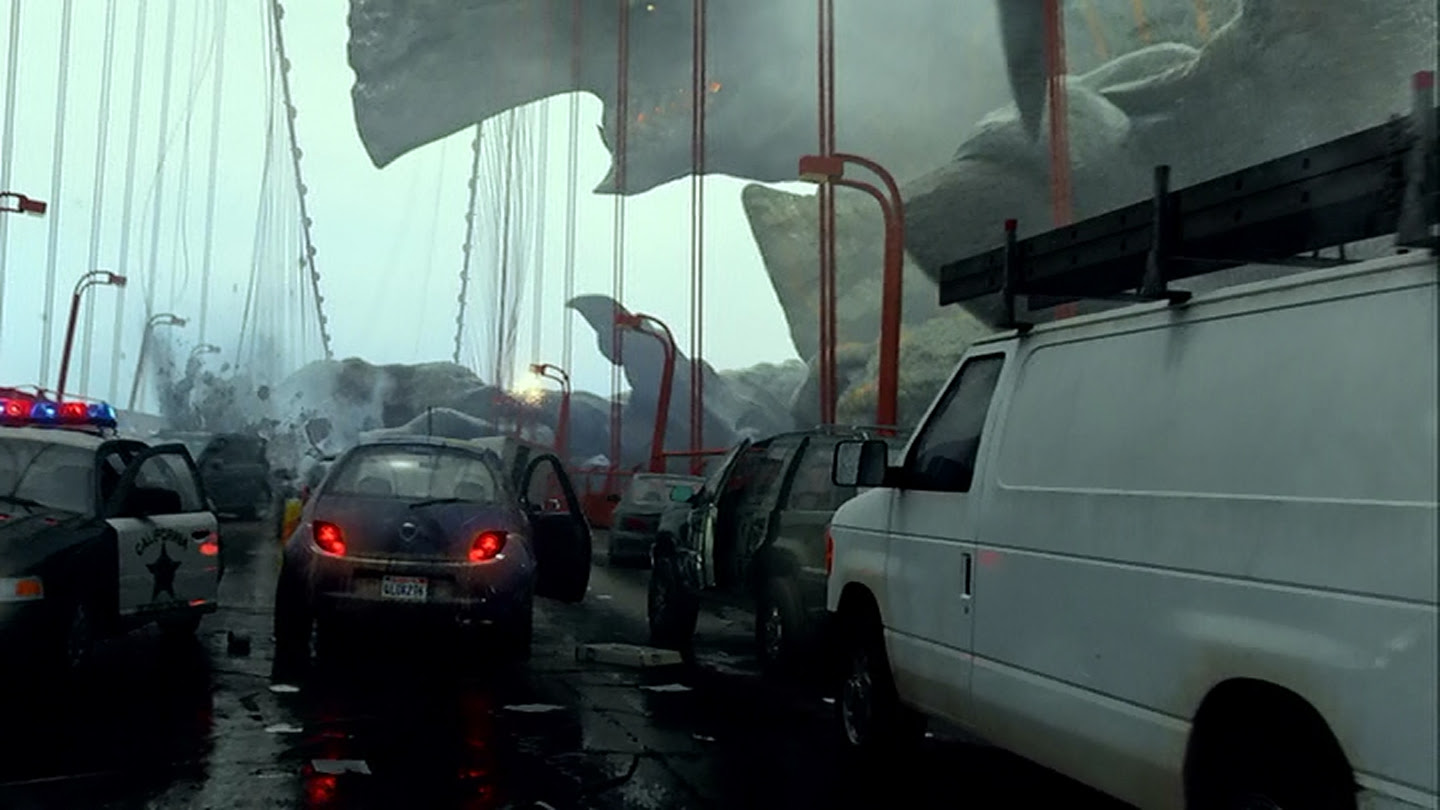 Del Toro said he didn't want to create a film of homages, that he wanted his kaiju to be unique, but he has close to a hundred years of giant monster films to draw from. Of course he includes a shot of a gigantic footprint. They create scale, and have been part of the genre since King Kong, and the sandy beach reminds us of Godzilla's island departure in the original Godzilla. But referencing is not all Del Toro wants to do. He breaks new ground, showing us enormous piles of toxic kaiju excrement, something we haven't seen in a giant monster film before. This is part of del Toro's desire to make his kaiju more natural, even though they are alien and, like all giant monsters, patently impossible. 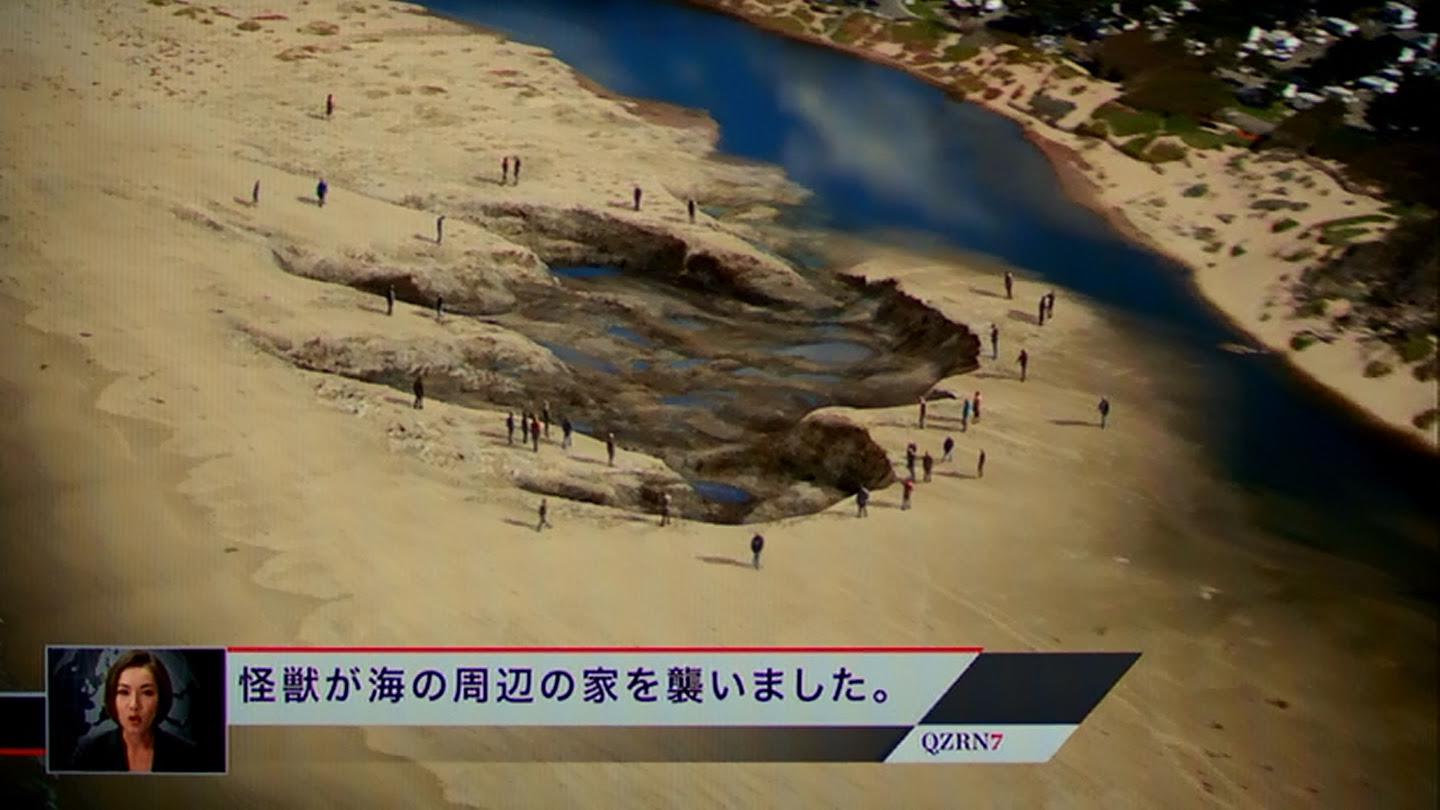 The jaeger, the creation of giant robots to go toe-to-toe with the giant monsters, draws a lot from Western film tropes. Stacker Pentecost is a Marshal. Pilots are called Rangers. The governments of the world, which did band together to create the Jaeger program, decide it's too expensive and start working on a patently ineffective wall to contain the Kaiju. This may be part of the military is useless trope started by Ishiro Honda, which has slowly eroded in the later Godzilla films. Unlike Mechagodzilla II and III, which are military programs, the Jaeger pilots are more defiant, because their essential quality, Drift Compatibility, doesn't appear to respond well to military discpline. Early in the film, Pentecost is shown in military uniform, but he doesn't reappear in it during the Jaeger Program's last, desperate attempt to stop the kaiju invasion. 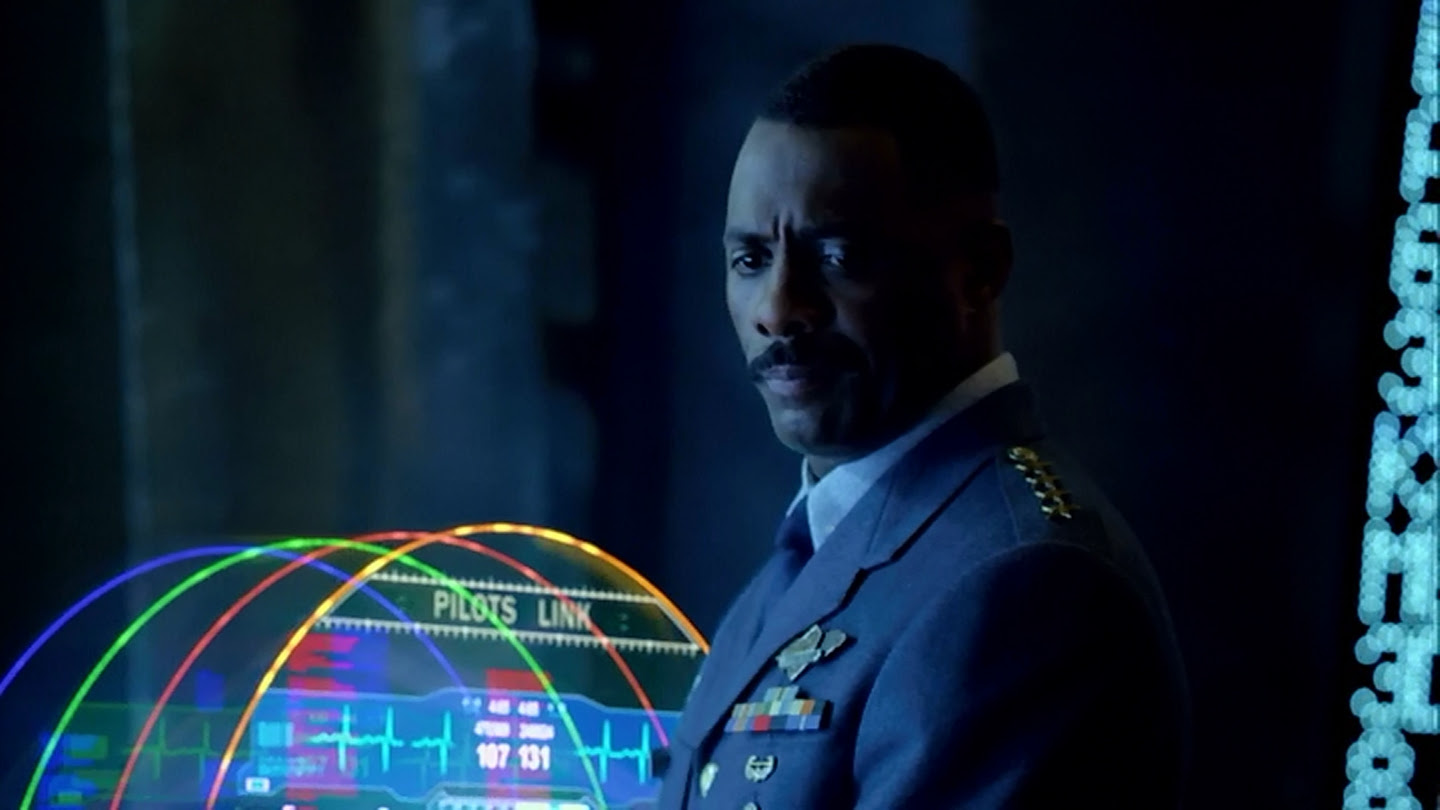 The Drift is a wonderful piece of plot-devicium, but serves so many purposes that I have to marvel at the efficiency with which the concept is handled. In keeping with the film's theme of unity and togetherness, a single pilot cannot handle the neural load of running a giant robot. So two people must do it, by partially merging their minds. Thus we get Raleigh Becket's trauma, as he was Drifting with his brother when his brother was killed. When Mako Mori first drifts with Releigh, she relives her childhood survival of a Kaiju attack, giving us insight into her character, her relationship with Stacker Pentecost, and showing us how pants-shittingly terrifying a kaiju attack is. It also provides us Dr. Geiszler with both risk and background infromation concernig the minds behind that kaiju. Plot point, character development, theme emphasizer, the Drift is a hard-working concept. 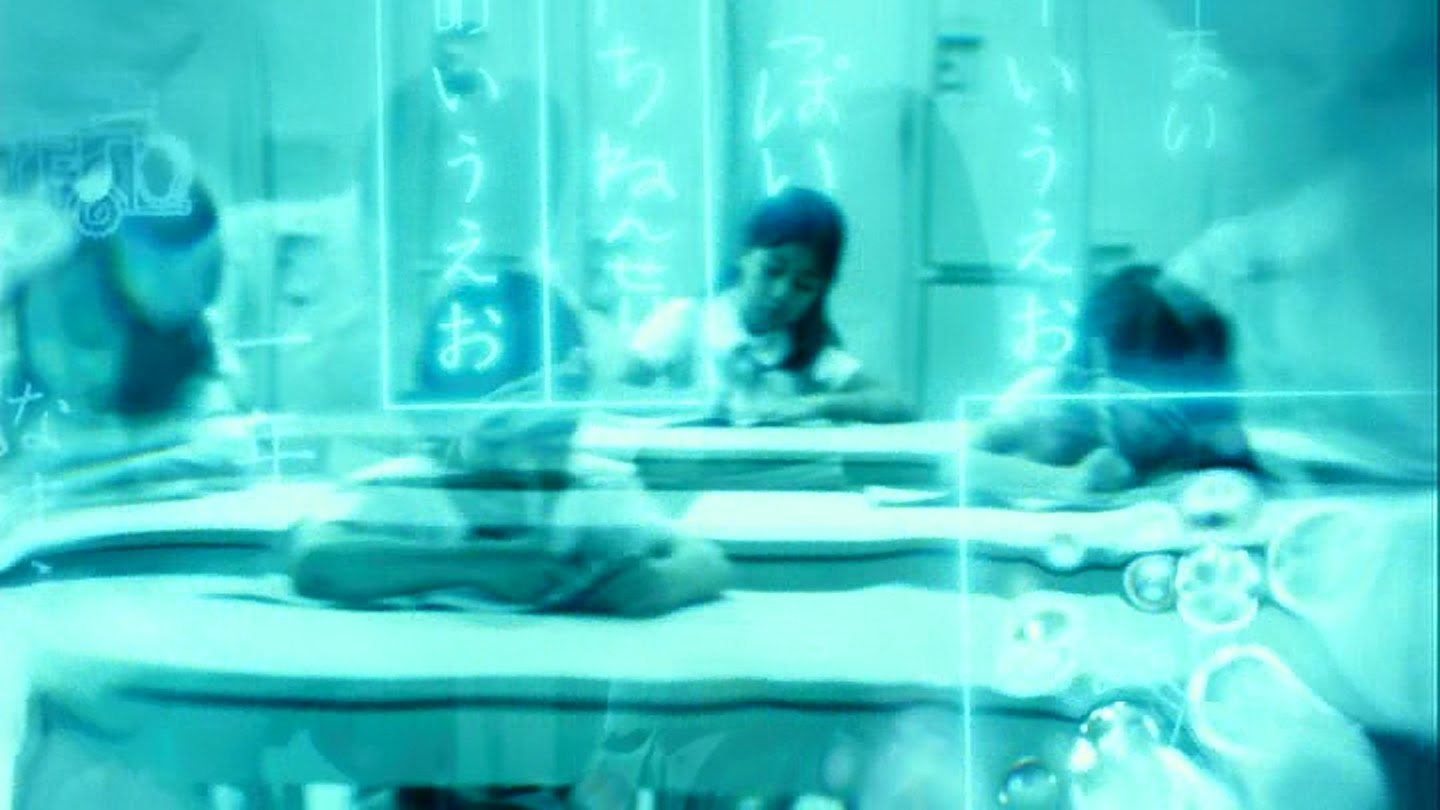 The first fight we are treated to involves the inevitable fishing boat. As I have said previously, if you live in a kaiju-infested Earth, the fastest way to meet a kaiju will be to be a fisherman. This stems back from the original Godzilla, and the Lucky Dragon 5. The difference is that Gypsy Danger rescues the boat, because humanity is fighting back against the kaiju. 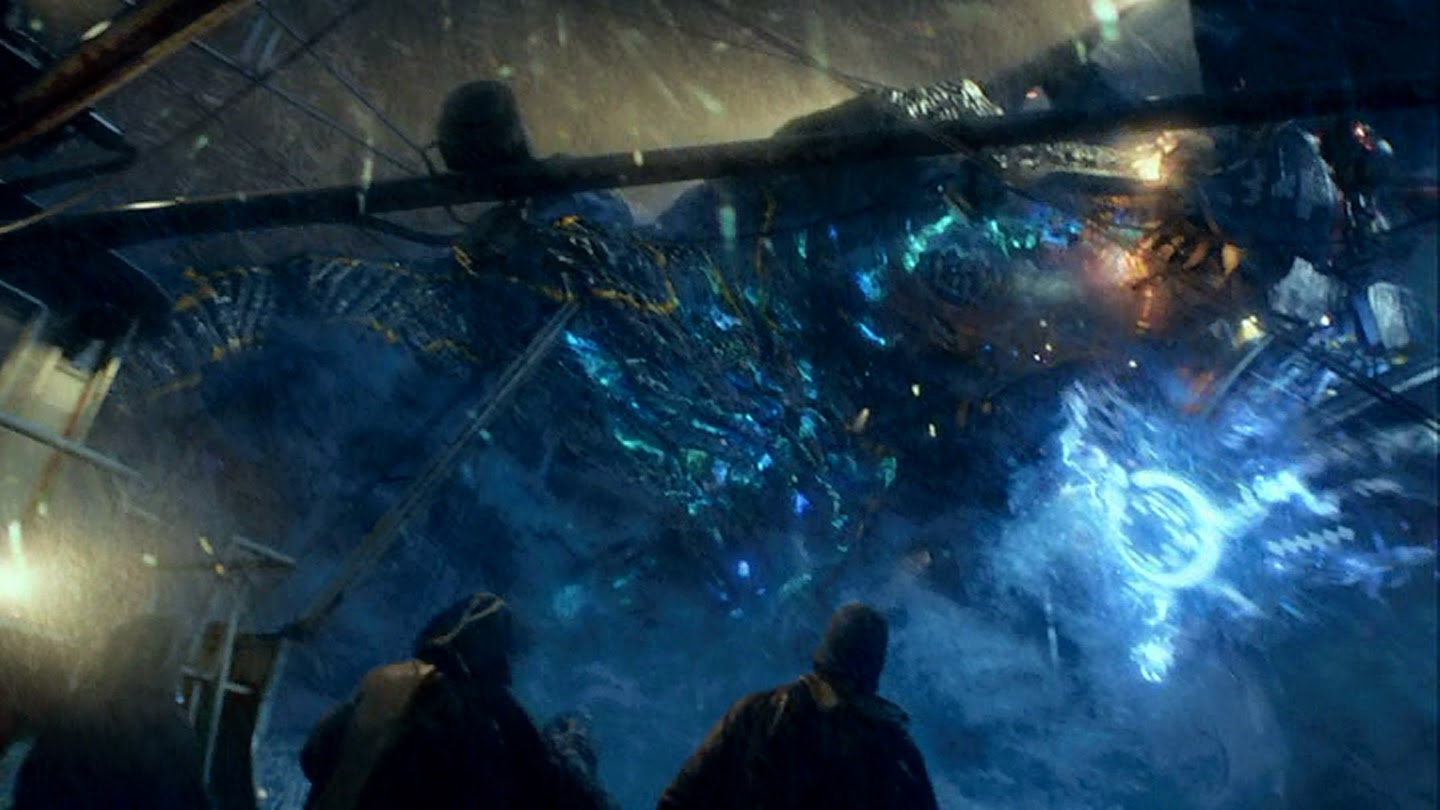 Because the kaiju and the jaegers are CG, the close-in fighting between them has a different tenor then they do with men in suits. Men in suits don't want to be hurt, so they tend to wrestle, shoving, getting grips, and throwing each other. Jaeger vs kaiju combat is about impact, the kaiju slamming into the jaeger, the jaeger using its rocket fist to beat the kaiju to a pulp. I don't advocate one approach over the other. Each has its charms, and each can fail spectarularly. But the approach must be carefully handled. Del Toro seems to be very interested in creating depth in his films, making sure the backgrounds look good, the foregrounds make sense, and conveying a lot of information that doesn't have to be said. The blue streaks in Mako Mori's hair reflect the blue coat she was wearing during the kaiju attack. It's a telling detail detail in a film filled with telling details, which create depth, and indicate a consistent level of world-building that makes the film work well for me. This is thrown in very sharp relief when I watch something like Zarkorr! The Invader or the Atlantic Rim mockbuster. 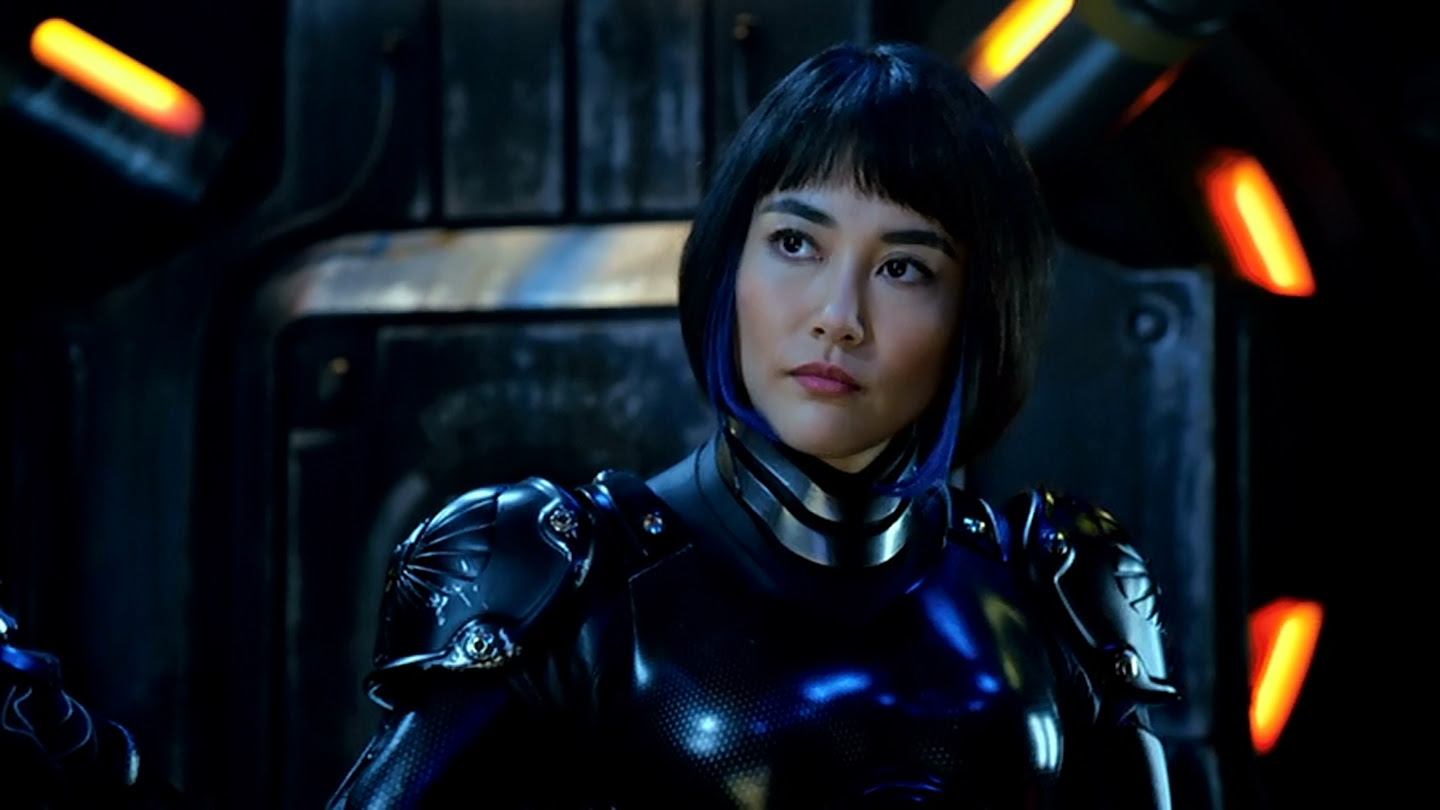 Also referring to the original Godzilla is the “kill them or study them&rdquot debate, in this case personified by the very different scientists. In the same way that Dr. Serizawa (who is name-checked) from the original Godzilla is of two minds about what to do about the gigantic creature destroying Tokyo, the two doctors bicker from their different points of view about the best way to defeat the onslaught of kaiju. Given the film's theme of unity and togetherness, it still comes as a pleasant surprise that both of them are right, and that they have to work together in order to solve the full problem. 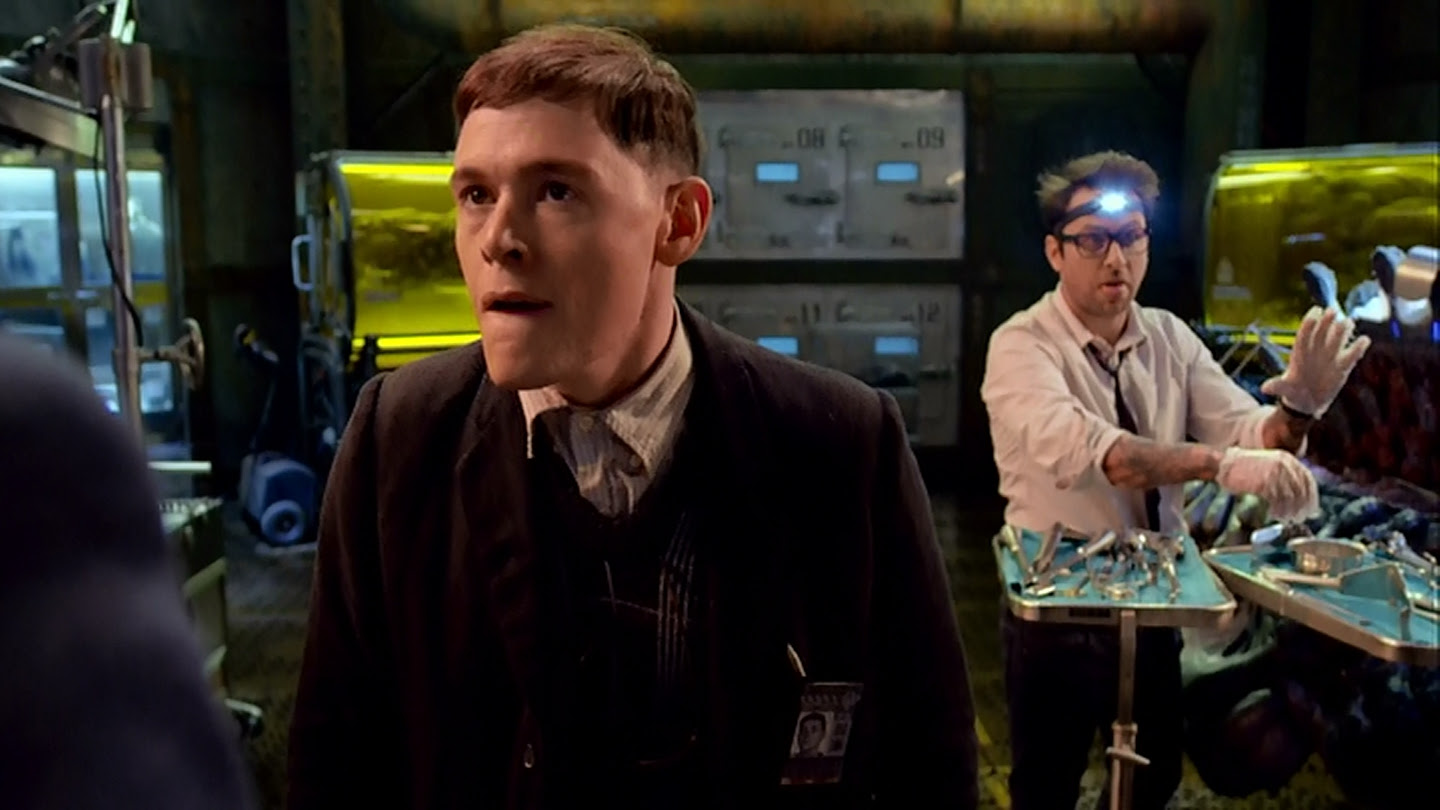 One of Pacific Rim's greatest strengths is that, more than any other film I can think of, with the possible exception of original Godzilla, it captures the terror of having a gigantic monster tearing down a city around you. Mako, in her first Drift experience, relives the terror of Onibaba's attack on Tokyo. Mako remembers being small and powerless, little more than moving debris in front of the 55-meter tall kaiju. Buildings crumble, cars fly through the air, and all she can do it hide and hope the terrifying monstrosity passes her by. The scene is utterly convincing, confronting the viewer with a weeping child, and we share her fear. Cloverfield attempted to do this, but the limited information available to the characters and lack of focussed direction did not permit the audience to really experience the fear that the characters do. We also share her relief when the giant is defeated, and Striker Pentecost climbs out of the jaeger that has defeated Onibaba. It is one thing to tell the audience that Mako is in awe of Pentecost. It is another thing to hand them that experience so that we feel it, too. And not just from one side. Although the sequence concentrates on Mako, we also see her from Pentecosts' point of view, and we understand why he is protective of her. It's a beautifully handled sequence, the destruction of fear turning into the beginning of hope, and two people who bond with each other in the aftermath of blood, terror, and death. 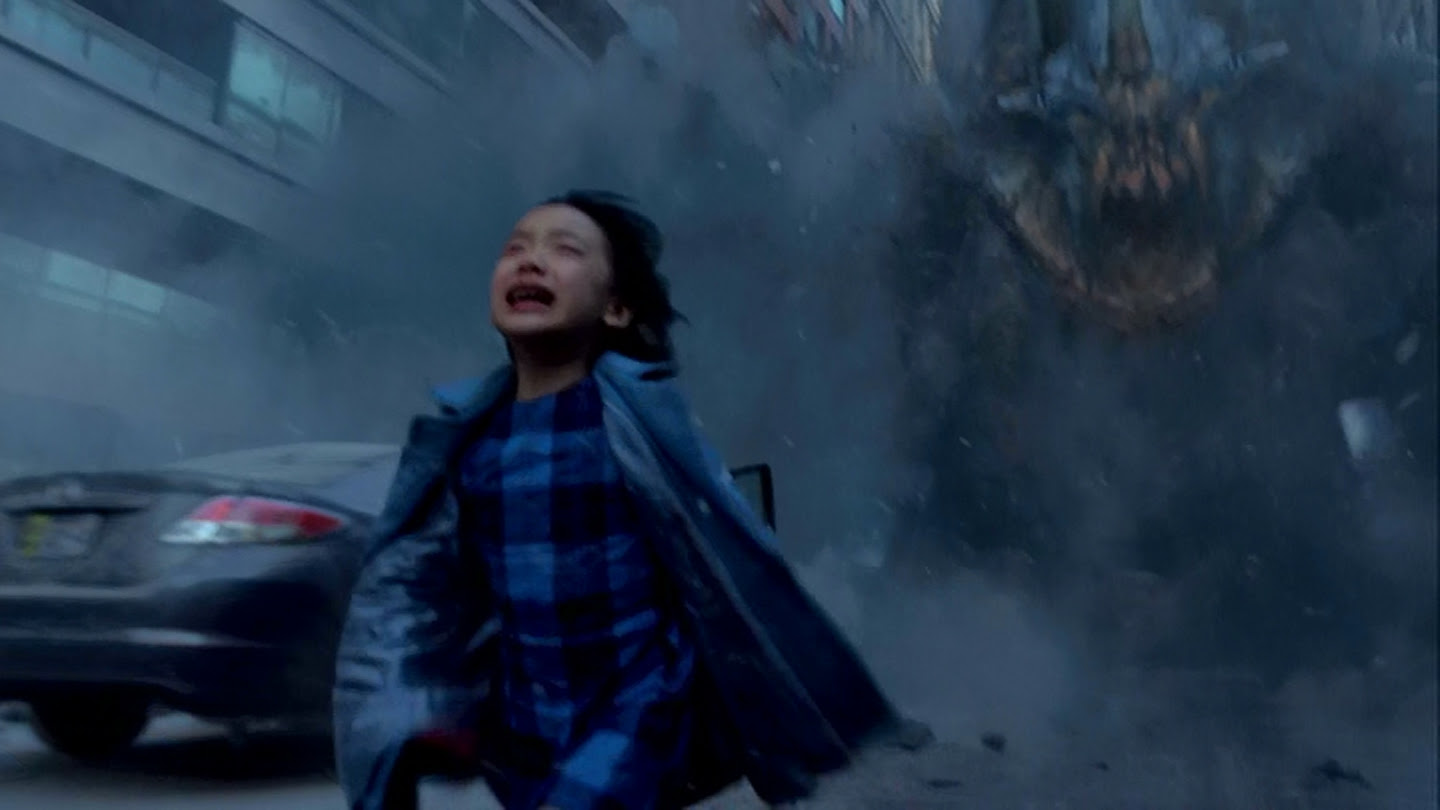 The Kaiju design is wonderful. Del Toro says he tried to make them look like animals, and yet the designs should still look like there could possibly be a man inside a suit. The creatures are diverse and strange. The Pacific Rim Kaiju list contains the names of more than eleven kaiju, and even more that do not have specific designs. Knifehead looks like a goblin shark. Leatherback is similar to a gorilla, possibly a tribute to King Kong, and has an EMP generator. Otachi has very long, spindly arms that become wings, strangely a combination of Rodan and Clover. It spits acid like Biolante. This diversity encompasses much of kaiju history without being theft, and emphasizes the strangeness of the monsters, the need to continually and pro-actively engage them rather than cowering behind the Wall. It also helps keep the sense of wonder. Kaiju are not merely enemies to be destroyed, each one is an individual, and each one has surprises. One interesting change in the kaiju design is that the 2013's Traspasser, is red inside. The ones we see in the film's present all glow blue. Again like Clover, the kaiju have body parasites similar to the Giant Isopod. 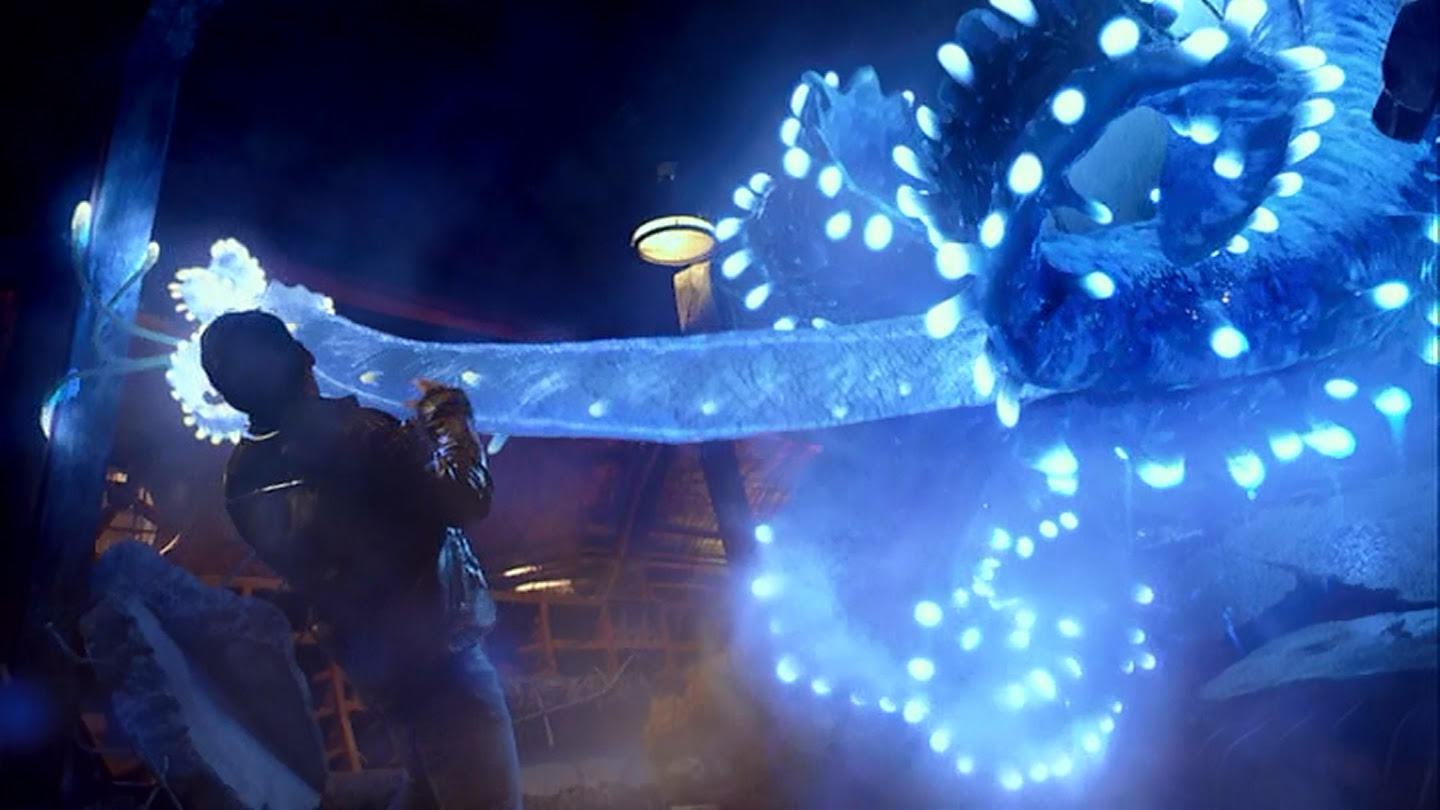 Further, as with the Godzilla series, and Gappa, a young kaiju appears. Unlike the junior versions of Godzilla and Gappa, this is in no way cute. It's a frantic, disoriented, hungry kaiju the size of a bus. 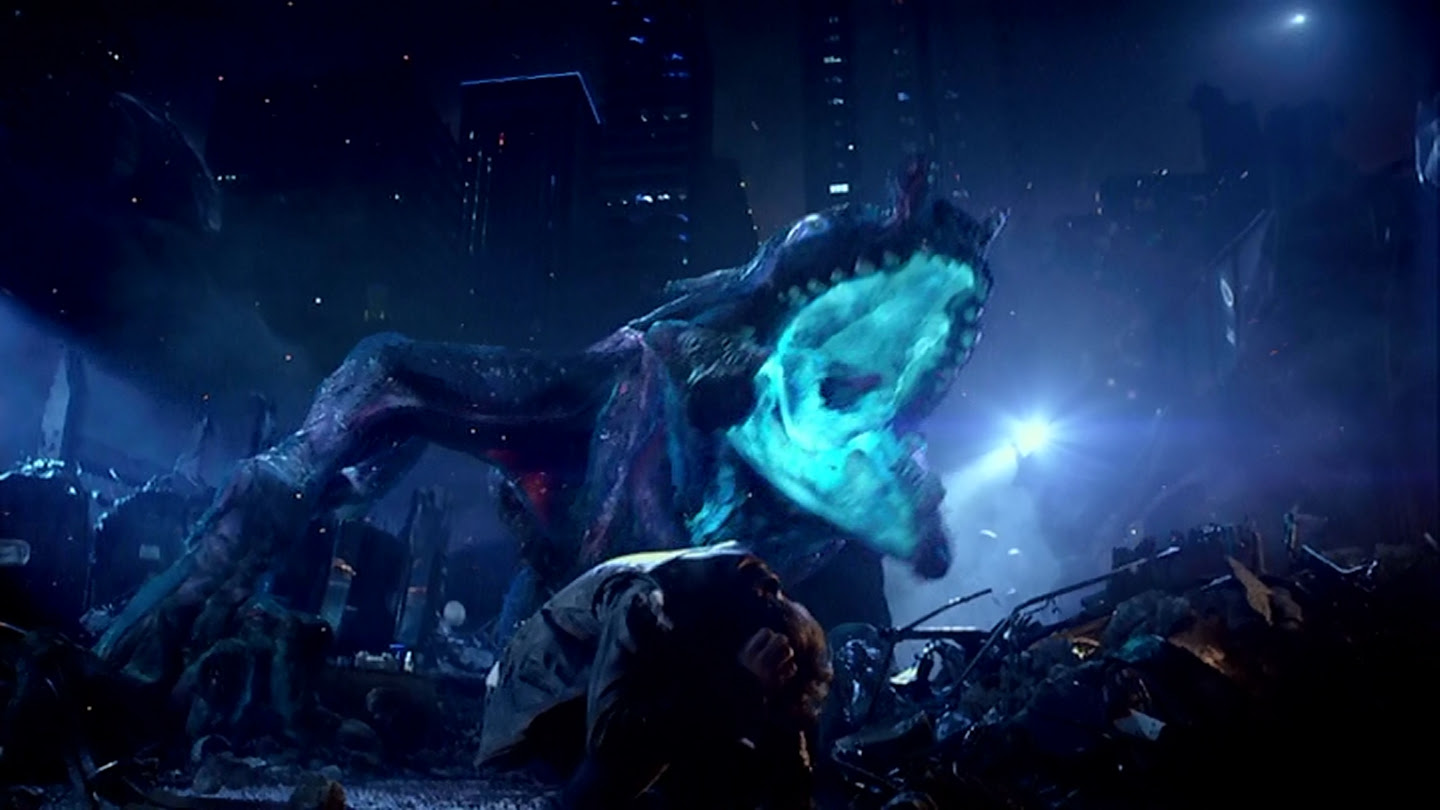 The film isn't perfect, especially when it gets to science. As much fun as the Scientific American blogs on the subject are, they do miss the quick bobbles. Many jaegers are the subject of the boast that they contain no alloys, but titanium, which Cherno Alpha is made of, is brittle unless it is alloyed. Raleigh's contention that Gypsy Danger is analog is completely laughable, since there are holograms surrounding the pilot's fists. It would take more than ten chinook helicopters to lift a jaeger. I know that lifing an oil tanker out of the water would bend it beyond usefulness, but there's a little shift in Gypsy Danger's grip as it goes to smash Otashi that is just beautiful. Again, del Toro's attention to detail and desire to create depth pay off for me.

Back to Daimajin next week.
Posted by John Goodrich at 4:49 PM

So pleased to read your assessment of this film. I'm not a big kaiju movie fan (despite watching many a Godzilla movie on TV in the '70s), but this is a movie I really enjoyed (and I got to share it with my son, then 9). Your description of the drift is spot on, it's a really rich device, plausible and fascinating. It's one element I love to describe to people who are unfamiliar with the film, people are usually impressed. The sequel didn't do quite as much for me. My only complaint with the original PR is so many of the fight sequences are at night that much of the detail is obscured. One doesn't get to savor the robots and monsters quite the way one might want to.