FOR THE LOVE OF GOD STOP CRYING! Pulgasari

Part of the fun of My Year of Monsters is tracking down really obscure kaiju films. And they really don't come much more obscure than North Korea's single entry in the genre, Pulgasari. This movie is more famous than it is watched, mostly because of the behind the scenes shenanigans. Which, admittedly put most other films to shame. 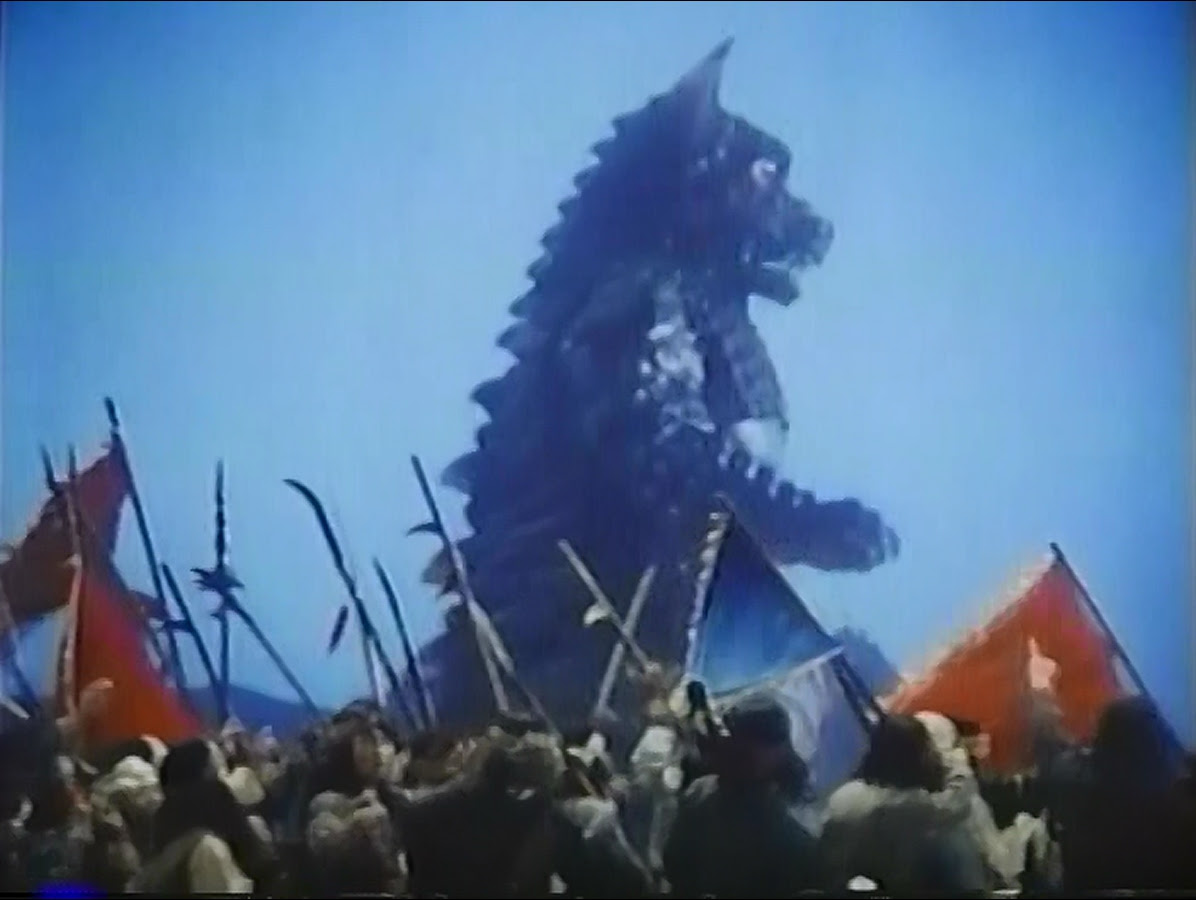 Kim Jong-il, future Dear Leader of North Korea, was known as a film buff. He loved Elvis, Rambo, Friday the Thirteenth, and Godzilla. But North Korea's film industry, despite adhering faithfully to his 1987 The cinema and directing, was unsatisfactory. It did not reach the international political acclaim that Kim Jong-il wished it to, so he had South Korean director Shin Sang-ok kidnapped in 1978. Shin Sang-ok made serveral films while in North Korea, the most famous being Pulgasari. In order to make sure that the spectacle looked good, the miniatures team, including Kenpachiro Satsuma, the suit man in The Return of Godzilla. Got that?

When the theme begins to play, obviously flutes on a synthesizer, the viewer understands that they are in for the most 80's experience that was ever put to film. The plot is just about bog-standard, until the kaiju comes along. The countryside is being repressed by an evil monarch and his evil governors. The poor but virtuous Inde and Ami love each other, but he is determined to fight the corrupt government. 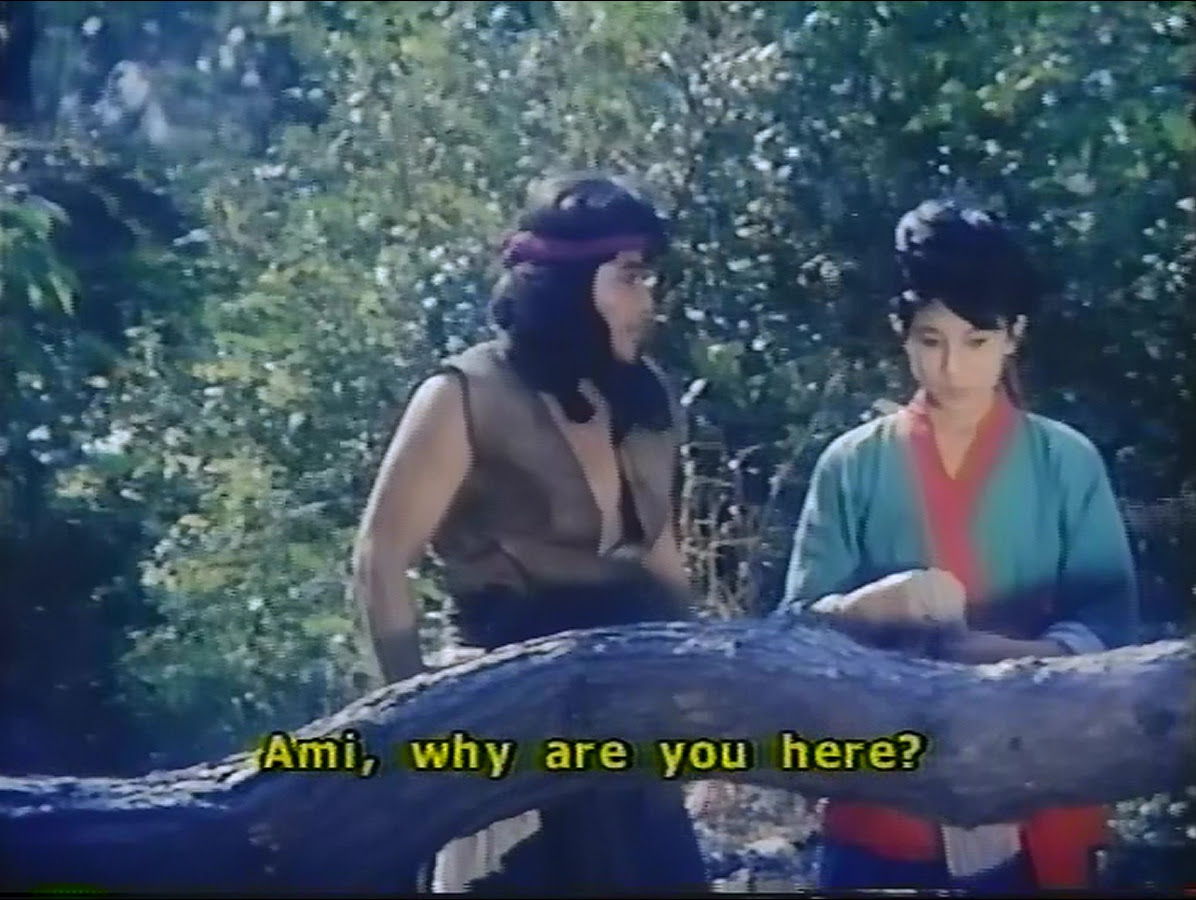 All schools of acting have their tropes. They only become a problem when they are repetitive or do not communicate the intended emotion to the audience. I'm not Korean, so I am not the intended audience. but for the love of God, all the women do is cry. Less that seven minutes into the film, Ami is crying because Inde wants to go join the rebels. And she never seems to stop. She's crying about the arrival of the Governor's men less than a minute later. Someone else is crying because the government men are taking all the metal farming impliments in minute ten. A minute later, she's crying over her mother who has been kicked by the soldier. AND THE WEEPING NEVER STOPS. Women cry as they deliver their terrible news, which is the only way anyone finds out what is happening in other locations. Anytine anyone is hurt, there's a woman there to weep over it. I get that it's supposed to be a note to indicate the emotional tenor of the scene, but it's so overused. We cannot constantly feel sorry for the weeping everyone in the film, because we get no rest from it. 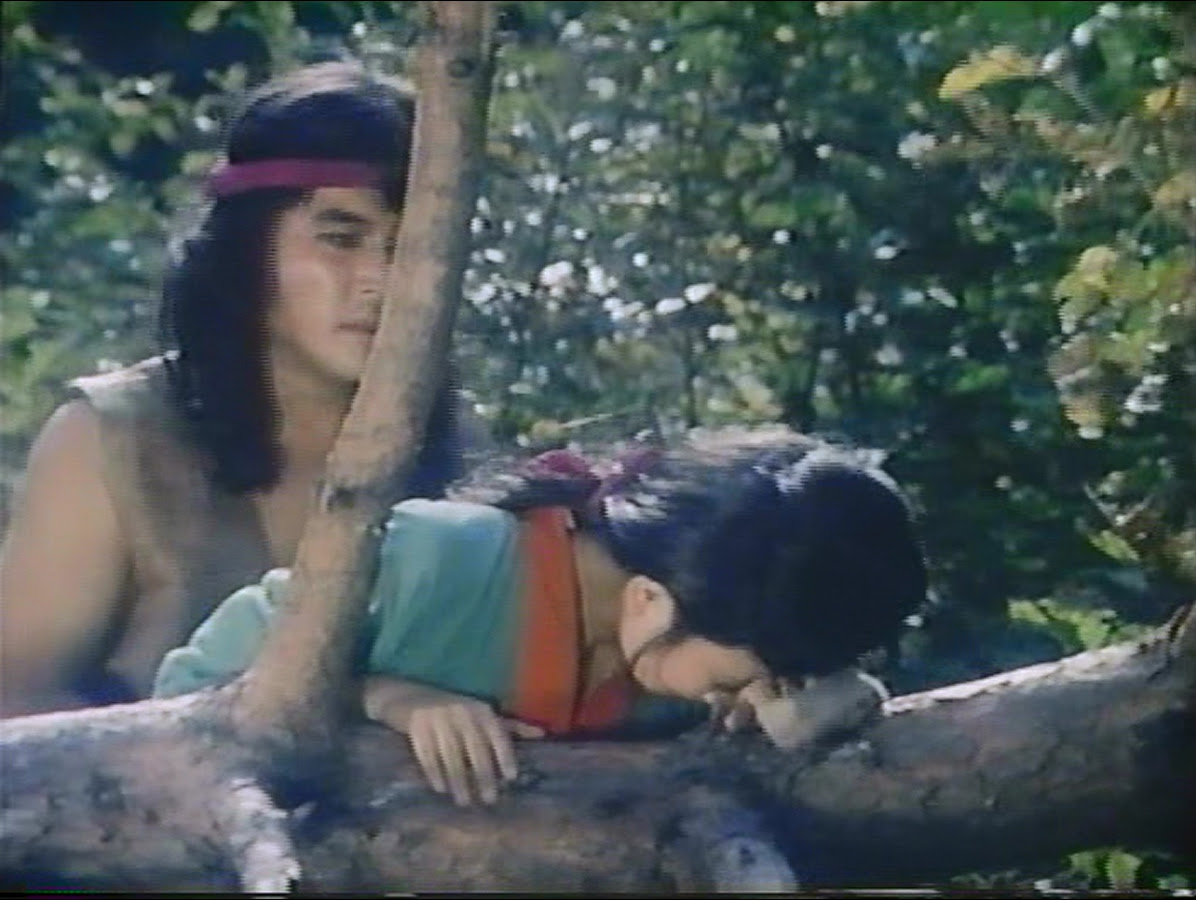 Pulgasari himself is interesting. He starts off as a tiny doll made of mud, rice, and tears (of course) as a starving blacksmith makes a little protector for the people. The doll only comes to life when his daughter pricks her finger and bleeds on it. 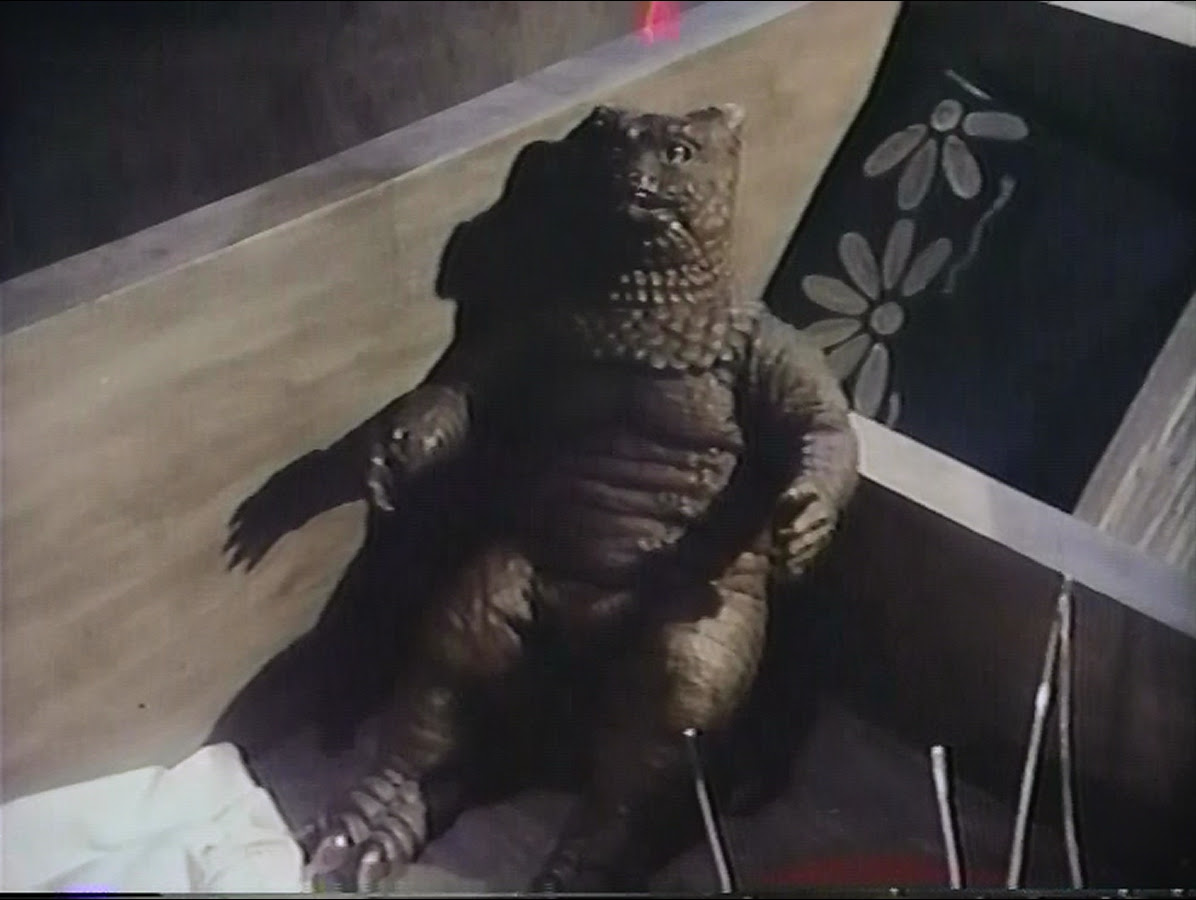 Initially, Pulgasari looks like a metallic bear. The snout, the vestigial horns that look like a bears high-perched ears. And it snarls like a bear. Only minutes after its animation, Pulgasari begins to consume metal, primarily iron and steel. Once it reaches full size, the horns give the head a more bullish appearance. I wonder if this is intentional, satirizing the American stock market, with its bulls and bears. 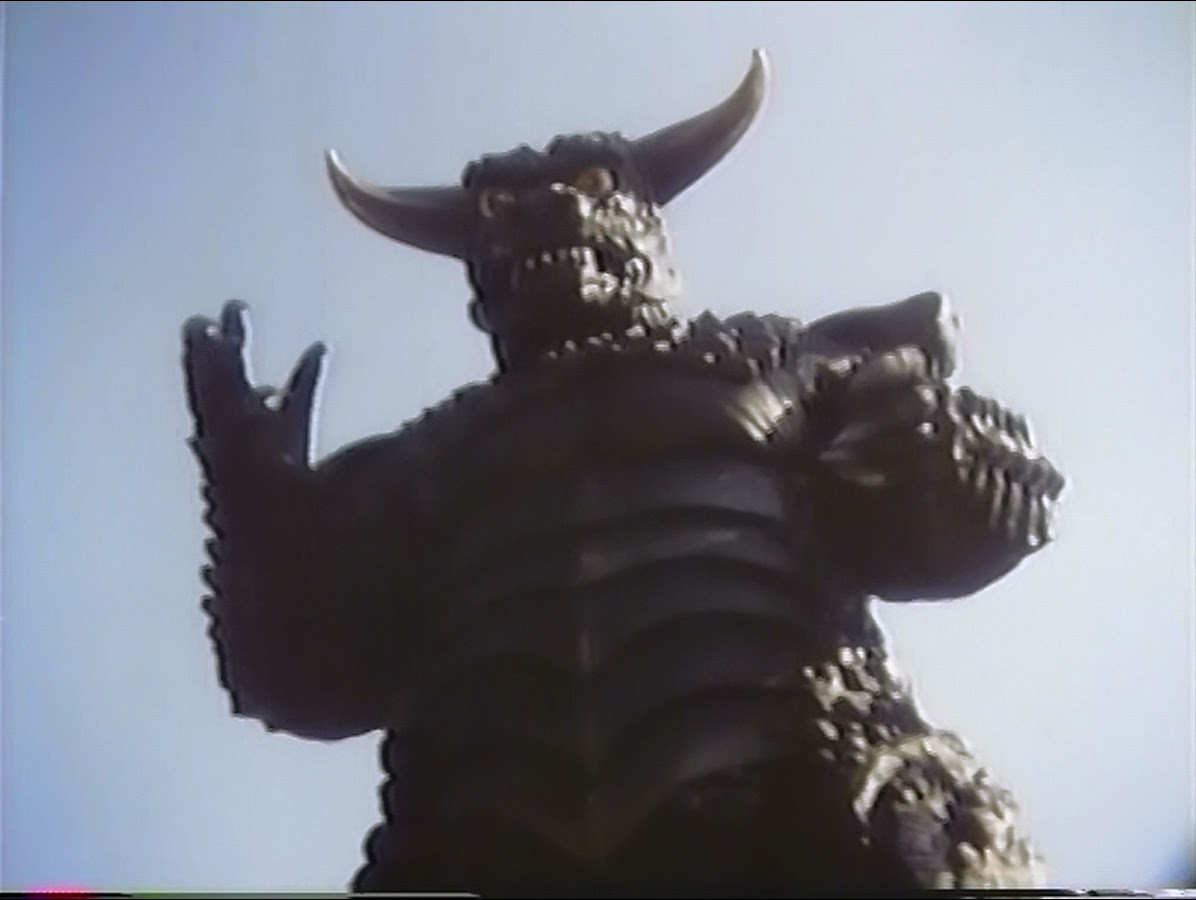 As this is happens in Goryeo dynasty, the military has no tanks to throw at gigantic Pulgasari. They do come up with some interesting alternatives, though. Realizing that Pulgasari obeys the commands of Ami, they capture her, order Pulgasari into a giant wooden cage. And then they burn the cage. 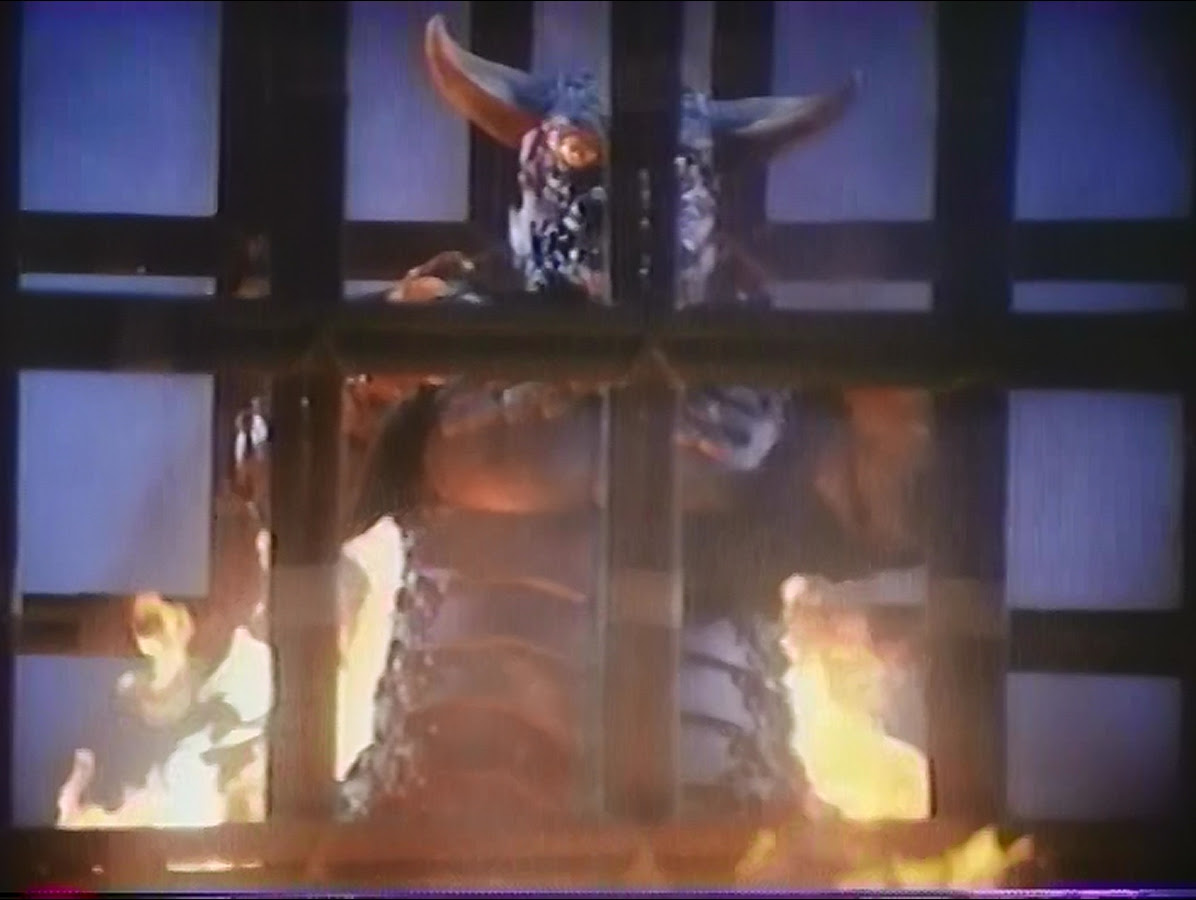 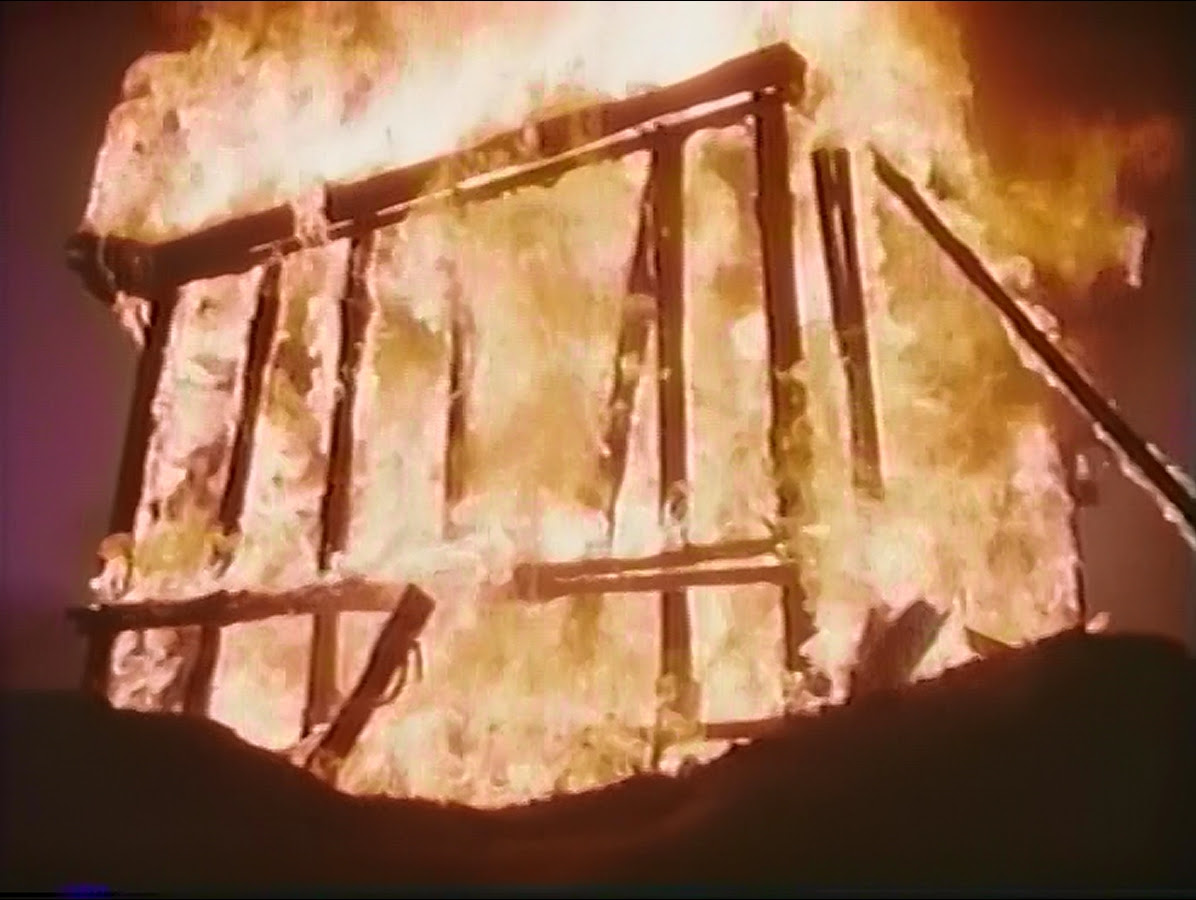 This results in a burning hot Pulgasari, or at least a Pulgasari with a strong red light on it. Pulgasari routs the army, then stumbles into a river and steams the heat off. Pulgasari is weakened, but not defeated. 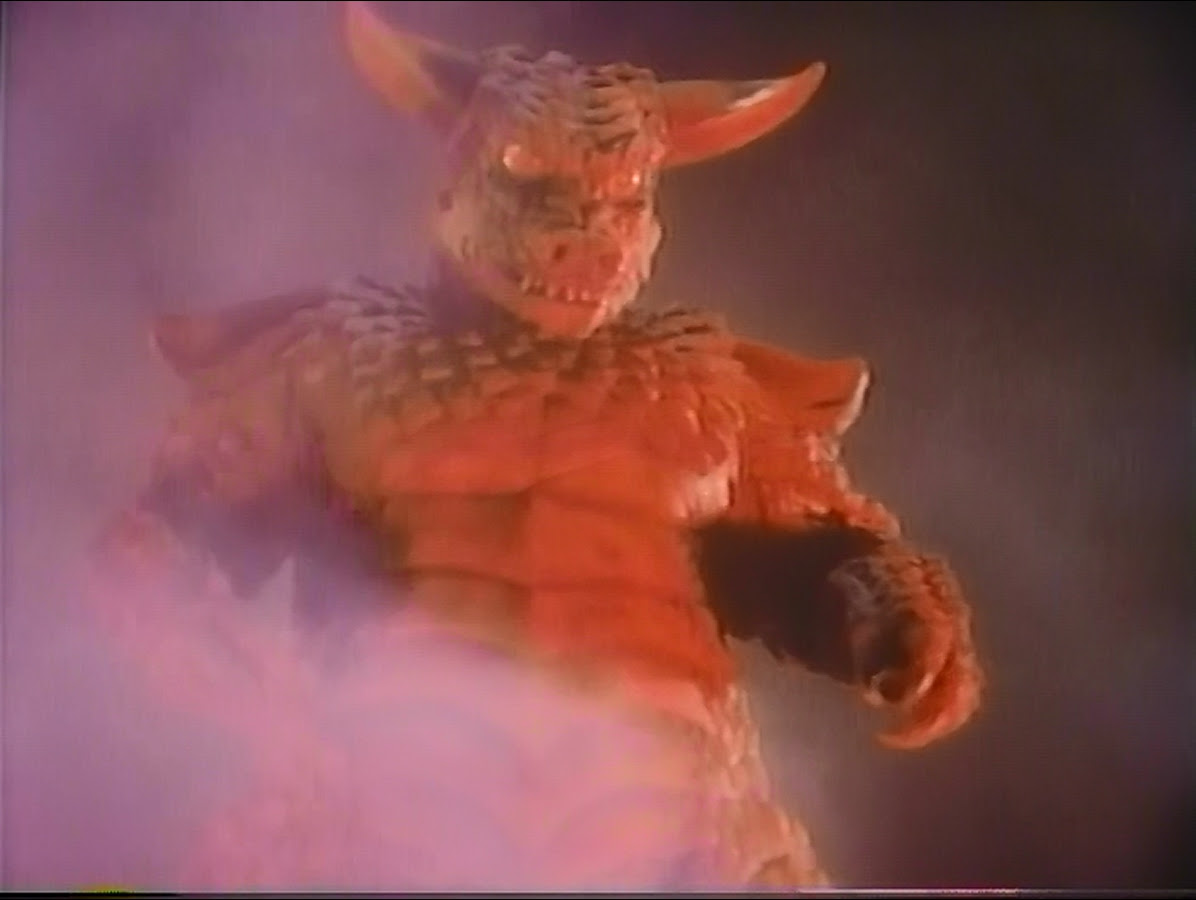 With Pulgasari at their head, the rebels decide to march on the capital. The government forces dig a giant pit similar to the one from King Kong vs Godzilla, while simultaneously exorcising him. This immobilizes him under tons of rock. The army then stomps on the rebels (cue Ami weeping as she learns about Inde's capture, and that he is hanged. Her little brother weeps on her wondering what they are to do. OH MY GOD THE WEEPING!). Ami decides to shed some more of her blood where Pulgasari is buried, and cue Pulgasari exploding from the ground. 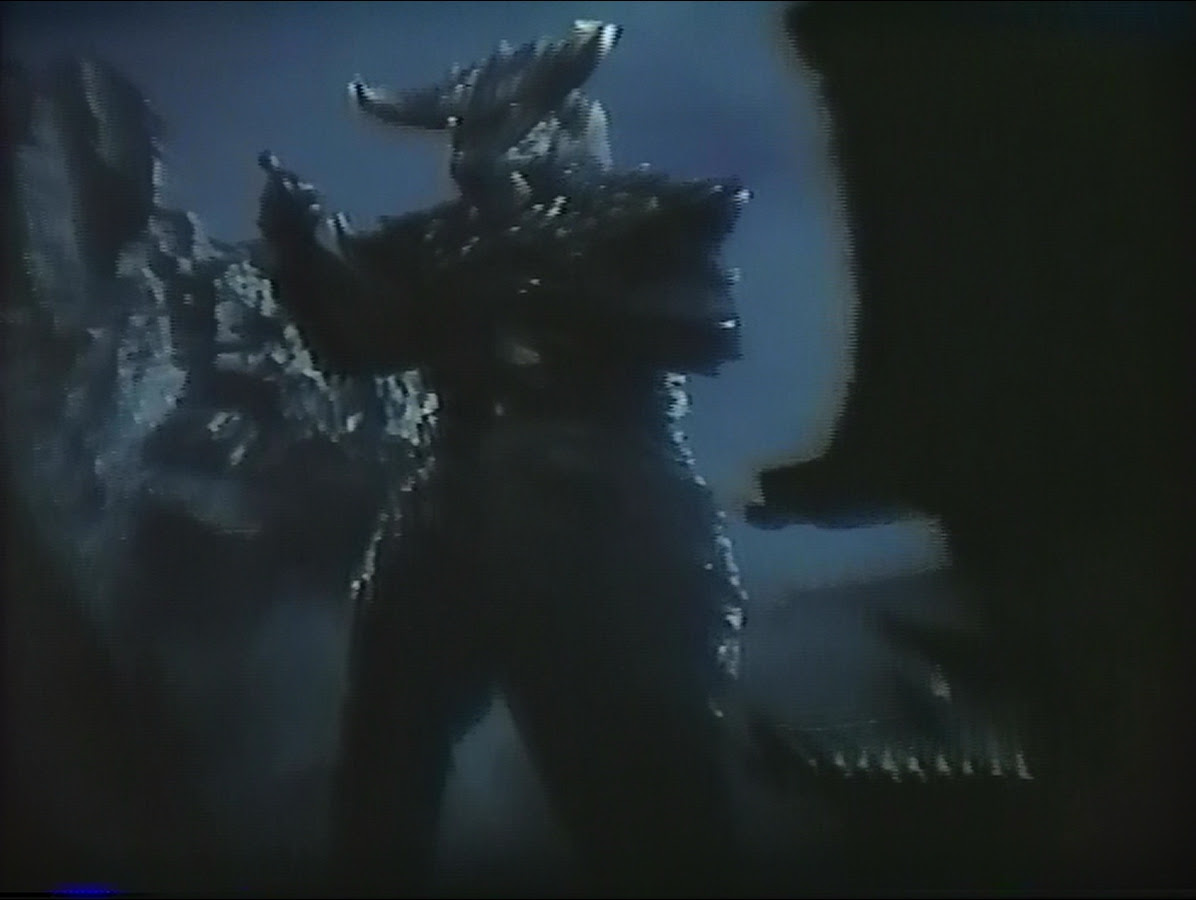 The general tells the King of his defeat, and we get a magnificent view of their hats. Look at those hats! 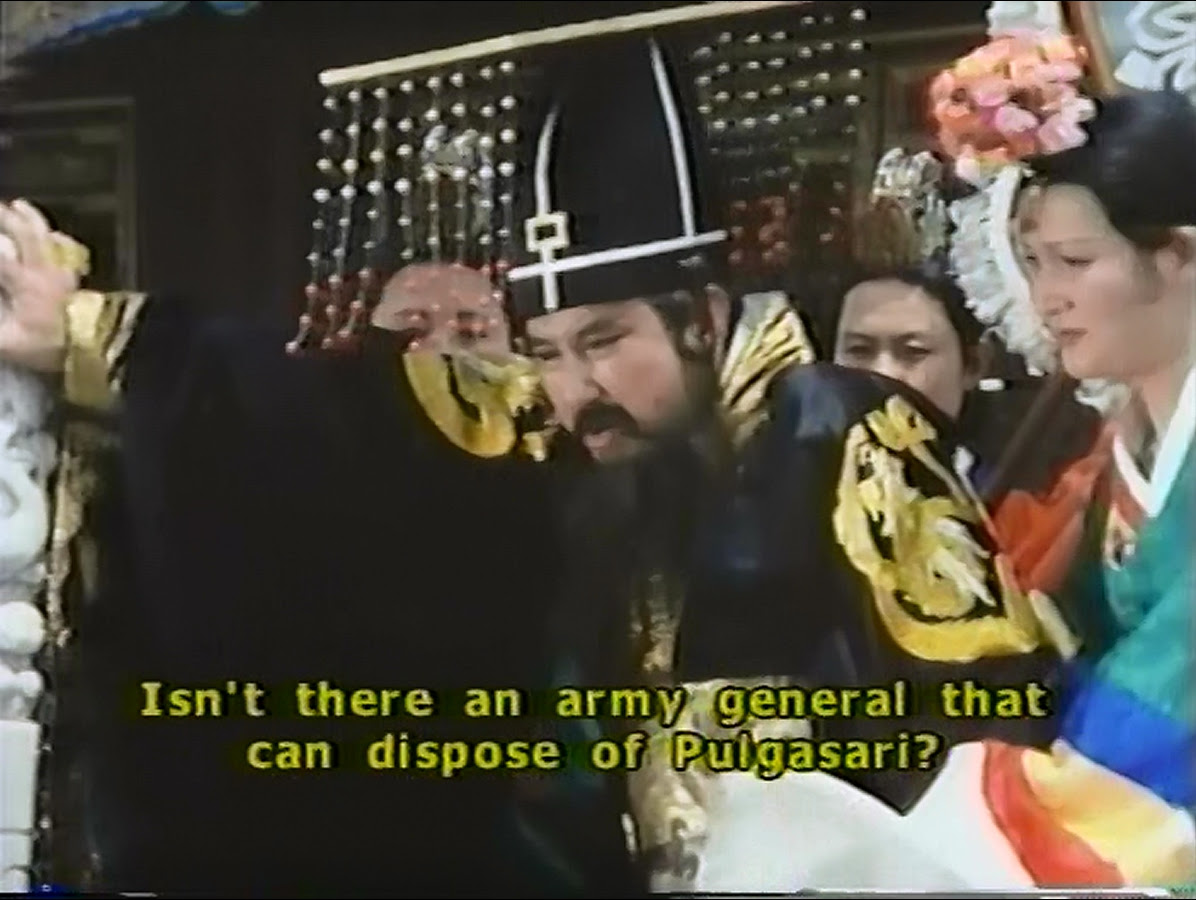 But the king has another plan up his sleeve. Giant cannon. 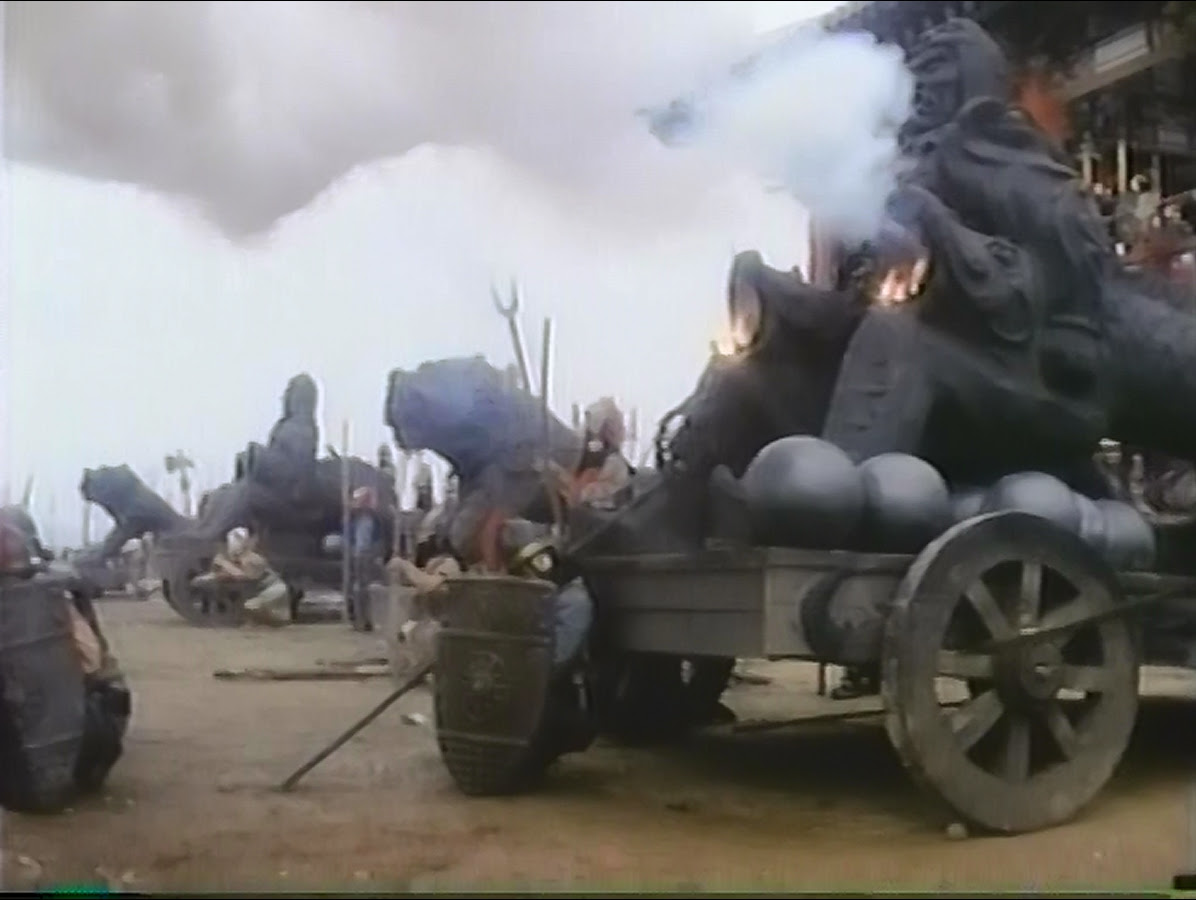 Pulgasari swallows the cannonballs and spews them back at the cannons. And then he goes to town on the palace in the first real spot of city-destroying in the film. The palace model is excellent, and Satsuma looks like he's having a great time trashing it. 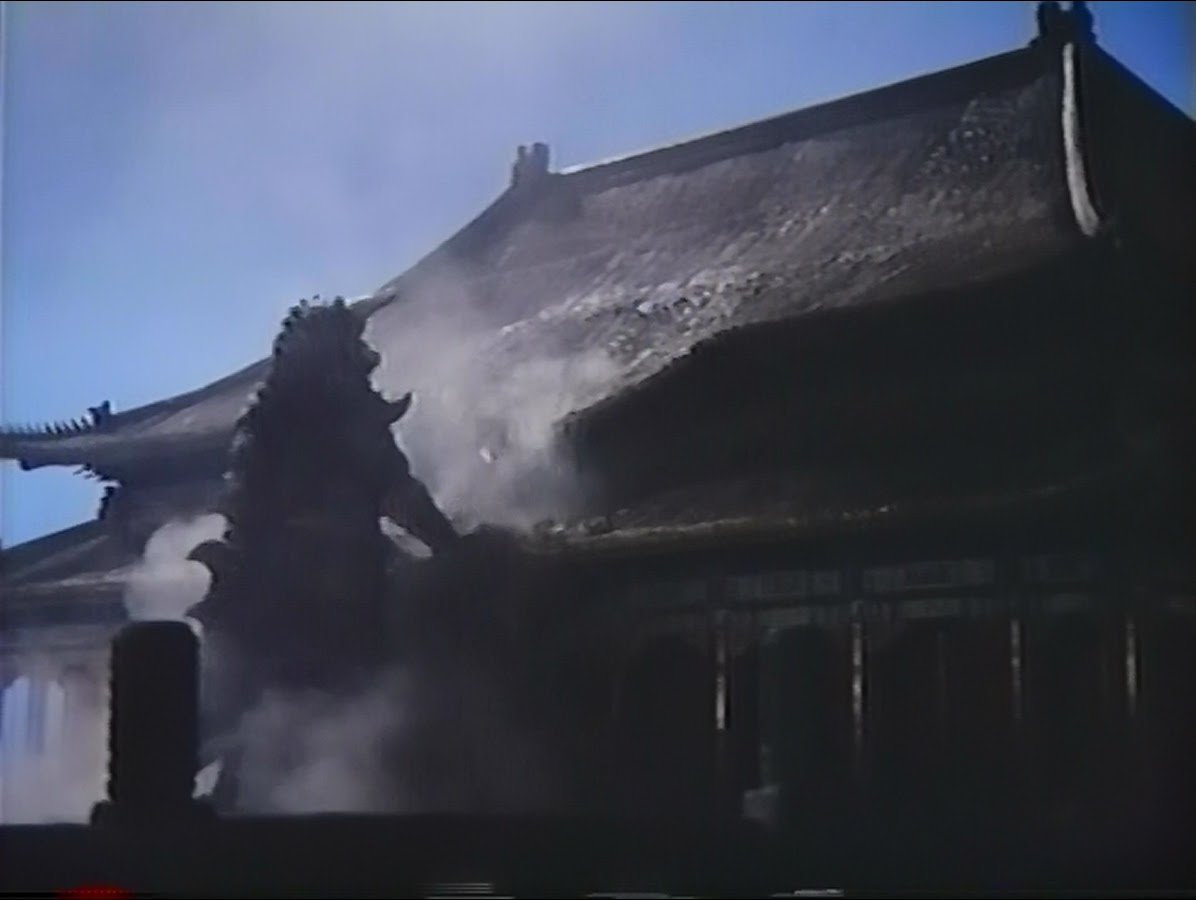 Unfortunately, overthrowing the king doesn't sate Pulgasari's hunger. The victors now must find more and more iron to feed him. Although they are grateful to the creature that made their victory possible, even Ami quickly turns against it, now that it's not producing anything for her. Ami smuggles herself into a temple gong and allows herself to be consumed. Like the The Beast from 20,000 Fathoms, Pulgasari dies like an opera tenor. 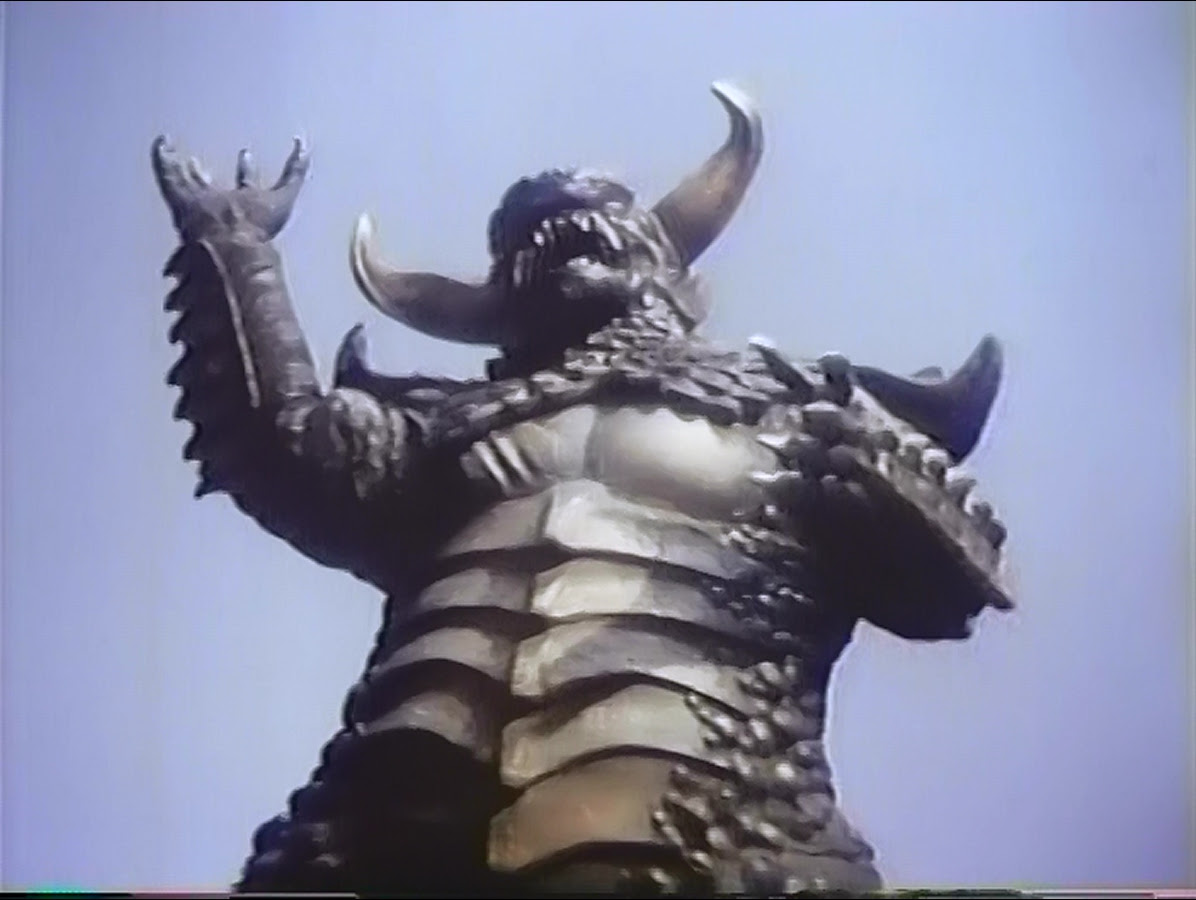 Pulgasari has a lot more in common with the Daimajin trilogy than they do with Godzilla. The beast is beholden to humanty and has a sense of justice, where Godzilla is an indiscriminate force of nature. In the end, Pulgasari crumbles like the Daimajin statue, rather than retreating to the sea, or going underground. The last shot of the film is Ami's corpse, and the single single tear that streaks down her cheek. Even in death, SHE CAN'T STOP FUCKING CRYING. 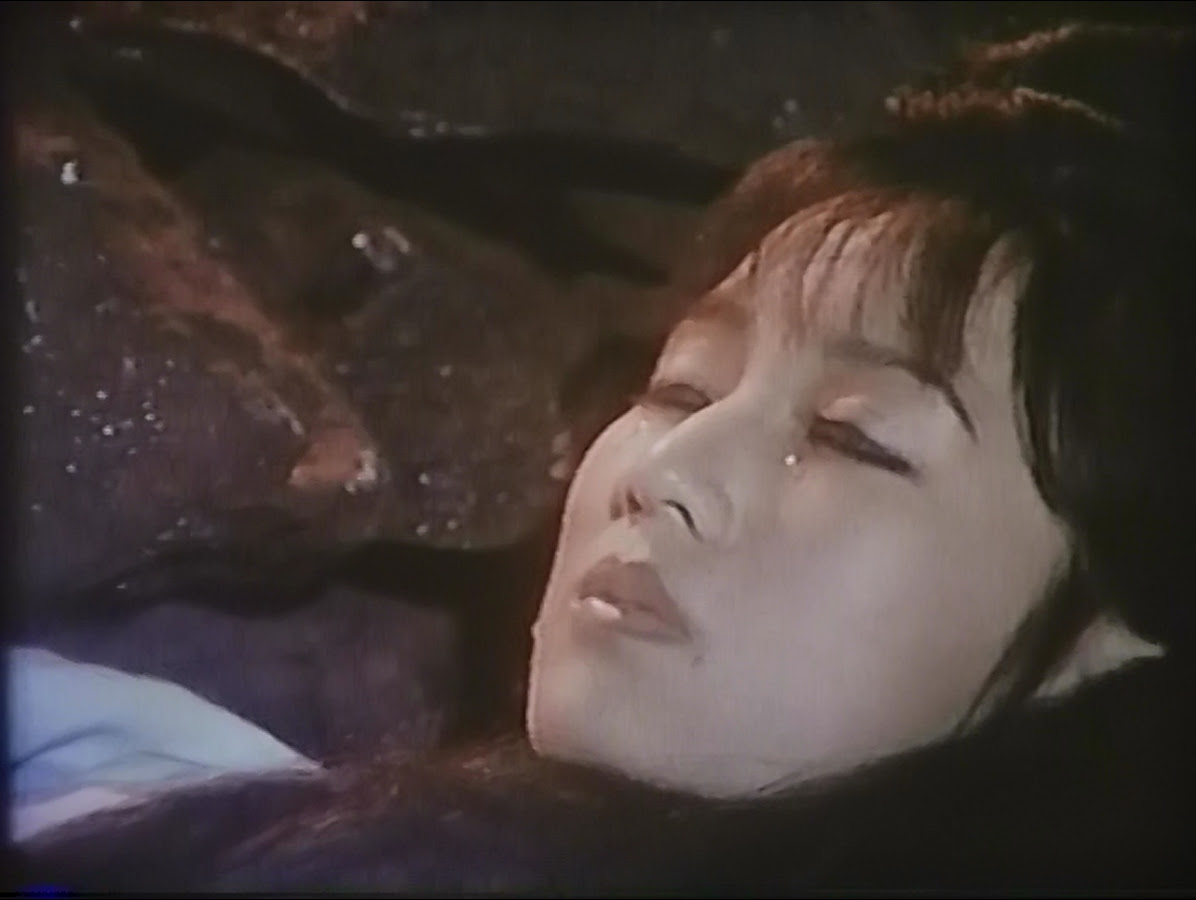 I often like films that have a deeper social message. The original Godzilla's anti-nuclear testing message makes the film a richer expereince. Here, the subtext is confused, at best. However, observing the irony in which Kim Jong-il creates a story about peasants rebelling against their authoritarian government is about as eye-rollingly ironic as Disney making films supporting piracy.

Overall, Pulgasari's monster effects overshadow the stilted acting and the corny script. It's not a great kaiju film, but it has some fairly interesting moments.

In two weeks, it's Godzilla vs Bioengineering.
Posted by John Goodrich at 12:31 PM