Sadly, the Royal Rumble is one of the most heavily adulterated films that is not available in its original Japanese version in America. The difference is notable: the American version opens with an irrelevant news report by some reporter opens the film, which clearly has blessed nothing to do with the rest of the fim. The special UN reporter continually pops in to tell us what we've seen, or occasionally what we're about to see. Akia Ifukube's beautiful score replaced with recycled American film music. Nevertheless, the film retains a lot of appeal.

King Kong vs Godzilla owes it's origin to Willis O'Brien, who was looking to make another King Kong film. After several iterations, he attempted to sell King Kong vs Promethius (another name for the Frankenstein creature) to Hollywood, and then abroad. In a delightful irony, Toho bought it. Kong's role went to Godzilla, and Kong was put in the role of Frankenstein's creature. Which is why Kong is strengthened by electricity. O'Brien's history of disappointing unproduced projects makes it difficult to tell whether the unscrupulous character of Mr. Tako comes from O'Brien's original idea, or the influence of Gorgo. Regardless, the jerk entreneneur becomes a stock character and MacGuffin for many kaiju films, from Gorgo's Joe Ryan to Mr. Tako to Pacific Rim's Hannibal Chau. Chau, as the product of a genre-savvy director, manages to be a better-rounded character than Tako or either of the selfish businessmen in Mothra vs Godzilla.

The rewrite is pretty competent. The film acknowledge Godzilla Raids Again. Godzilla is released from an iceberg, which makes sense since he was buried in ice at the end of the last film. The American insert, unwilling to assume the audience has seen either of the previous films, just claims the monster has been frozen for 65 million years, ignoring the fact that they already know it's name and express no surprise that it has atomic breath. 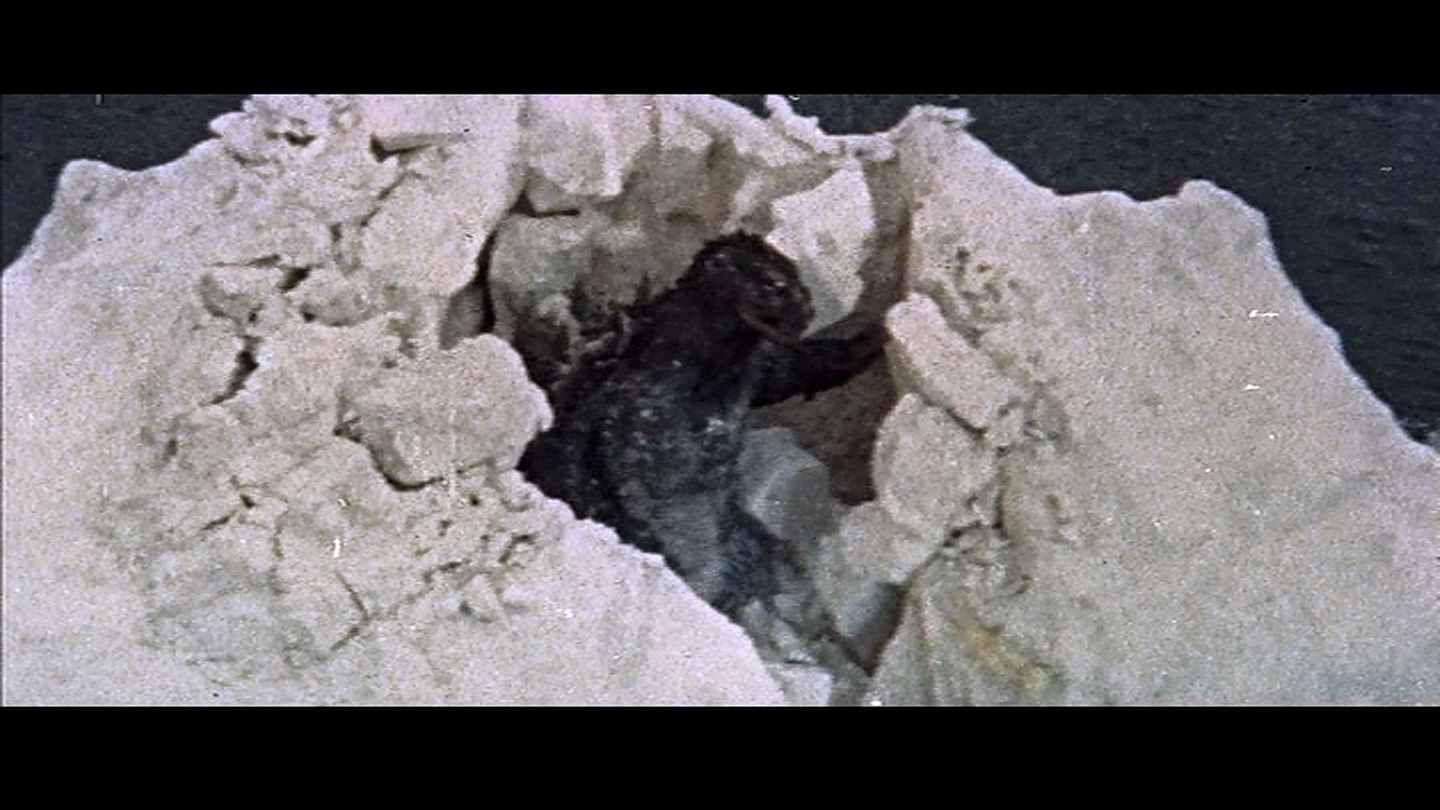 King Kong vs Godzilla sets the standard for “versus” monster films to come, in much the same way that King Kong set the template for the single-monster rampage. The two monsters appear, and the humans are caught in the middle. The small human dramas play themselves out, as each makes a small contribution that either benefits humanity or makes life difficult. In the last half hour of the film the two titans clash, giving the audience what they've come for, and resolving all plotlines, occasionally by fiat of monster stomp.

After Godzilla awakens, Kong must be brought into the picture. The scenes from Faro Island scenes are careful studies of the original King Kong ones. I cringe at the portrayal of the 'primitive' people, dressed like Hollywood Africans, leaping and yelling like Hollywood Indians. They are astounded and won over by Western technology and cigarettes. According to David Kalat, the Japanese version is more of a satire than American version. Still, these stereotypes were only just beginning to fade from American films. However, if the Japanese film is more satiricial in tone than the American one, this may be intentional. It's difficult to say.

Kong's setup is very similar to that of the original film. He lives on an isolated island, is restrained from the human-inhabited part of the island by a great fence (much more flimsy than the orignal). Ultimately, he is hauled off the island after being drugged (in original Kong, Denham has gas grenades. Here, he drinks local berry juice, and listens to the drumming of the locals).

A fair amount of the film is homage to the original Kong. Tokyo, for example, lacked anything as tall as the Empire State Building, so Kong stands on the National Diet Building instead. It's about as tall as he is. But the military lights him up with spotlights, and he's got a girl in his hand. During the climactic battle, Kong shoves a tree into Godzilla's mouth, an homage to a promotional still that wasn't in the actual Kong vs tyrannosaur fight. Kong also throws Godzilla, something he did with the tyranosaurus, which Godzilla closely resembles. Legend has it that suit actor Shôichi Hirose threw the Godzilla suit with actor Haruo Nakajima inside, as a way of demonstrating his strength. If true, it's a hell of a throw.

The Kong suit doesn't look good. His face is very immobile, and the costume looks sewn together. However, the Shôichi Hirose, the suit actor who showed up in a lot bit parts in Kurosawa's work, looks like he's having a wonderful time, and attacks the role with a lot of energy. Godzilla has also gotten new suit, with clawed hands and larger eyes to make him look more intelligent. The neck is more stocky, and the head set into it, rather than perched on top.

Director Ishiro Honda had not yet shifted the film's completely into fantasy. In keeping with the real world, rather than showing us the human cost of the devastation the monsters' rampage, we instead use the unique device of following Fumiko Sakurai, played by future Bond babe Mie Hama. As the love interest of Kenji Shara and desgnated princess-to-be-rescued, Fumiko has train encounters with both Godzilla and King Kong. The Godzilla encounter is similar to the one in the original Godzilla, and the Kong attack is rather different from the one from the original film, since Kong is so much larger. Still, Fumiko gets to play tiny Fay Wray to gigantic Kong. I imagine that after this experience, Fumiko will never take a train again.

There's a strange technical effects goof when Kong stands on the Diet building. Rockets are being fired off artillery pieces. The rockets themselves are animated onto the artillery barrels, probably because they had no way to make the models launch convincingly. The first round goes off fine, but in the second shot each rocket leaves a black negative of itself on the film after it is launched. It's an odd error, and the shot is as quick as possible to prevent the viewer from noticing.

This is the beginning of the regrettable stone-throwing, which infests the franchise for the next five or six films. It's silly and I find it uninteresting time-filler.

The military has a different trick up its sleeve. this time, rather than running the usual ineffective wires, they dig a trench and fill it with gasoline. Godzilla falls in, and explosives are detonated. This, predictably, does not stop him. However, the high-tension wires do. We aren't given an explanation for this, given that high tension wires didn't stop him in the original Godzilla. Perhaps these carry a higher voltage, what with Japan's surging industrial capacity and power production.

The climactic scene, unlike that of later versus films, is surprisingly short. But if you look for screenshots of the film, or remember it for yourself, those are hugely memorable eleven minutes. The fight is fast and furious, filled with building-stomping action, gigantic fires, and several reversals. Initially, Kong doesn't come off too well. He's knocked unconscious, or at least unresponsive twice in four minutes.

The fight also includes the only bit of stop-motion Godzilla footage ever filmed, in a jump kick that sends Kong sprawling. This could not have been done by suitimation, and I wonder if Honda created the scene to keep Tsuburaya in practice? There had been a single scene of stop-motion in the original Godzilla, also. Perhaps it was included as an homage to O'Brien. It's good quality, I might add. I wonder what might have happened if Toho had had enough money to pursue a fully animated Godzilla film. There are a few scenes with puppets, also. While unconvincing, they are quick enough that it's difficult to tell.

Only after Kong is struck by lightning (since he's the Frankenstein of the fight) does he gain enough strength to deal with Godzilla on a more even footing. And he seems to be able to channel the electricity through his hands, which hurts Godzilla. This will be an important part of Godzilla vs Mothra, the next film in the series, and later contradicted by Ebirah, Horror of the Deep and Godzilla vs Mechagodzilla. In these films, Godzilla gains strength from lightning.

As with Godzilla Raids Again, the end comes as the two monsters destroy a castle, Atami this time, and plunge into the ocean. The fight up till this point has been furious, once of the most intense seen in the series.

Despite being flawed in several critical ways, King Kong vs Godzilla remains a touchstone for many of us who stumbled on it flipping channels. Although Godzilla vs Megalon is said to be the most seen Godzilla film by American audiences, King Kong vs Godzilla seems to be the one that is most remembered. Megalon was never referenced in The Simpsons, for example. This is a clear reference in the episode “Wedding For Disaster” 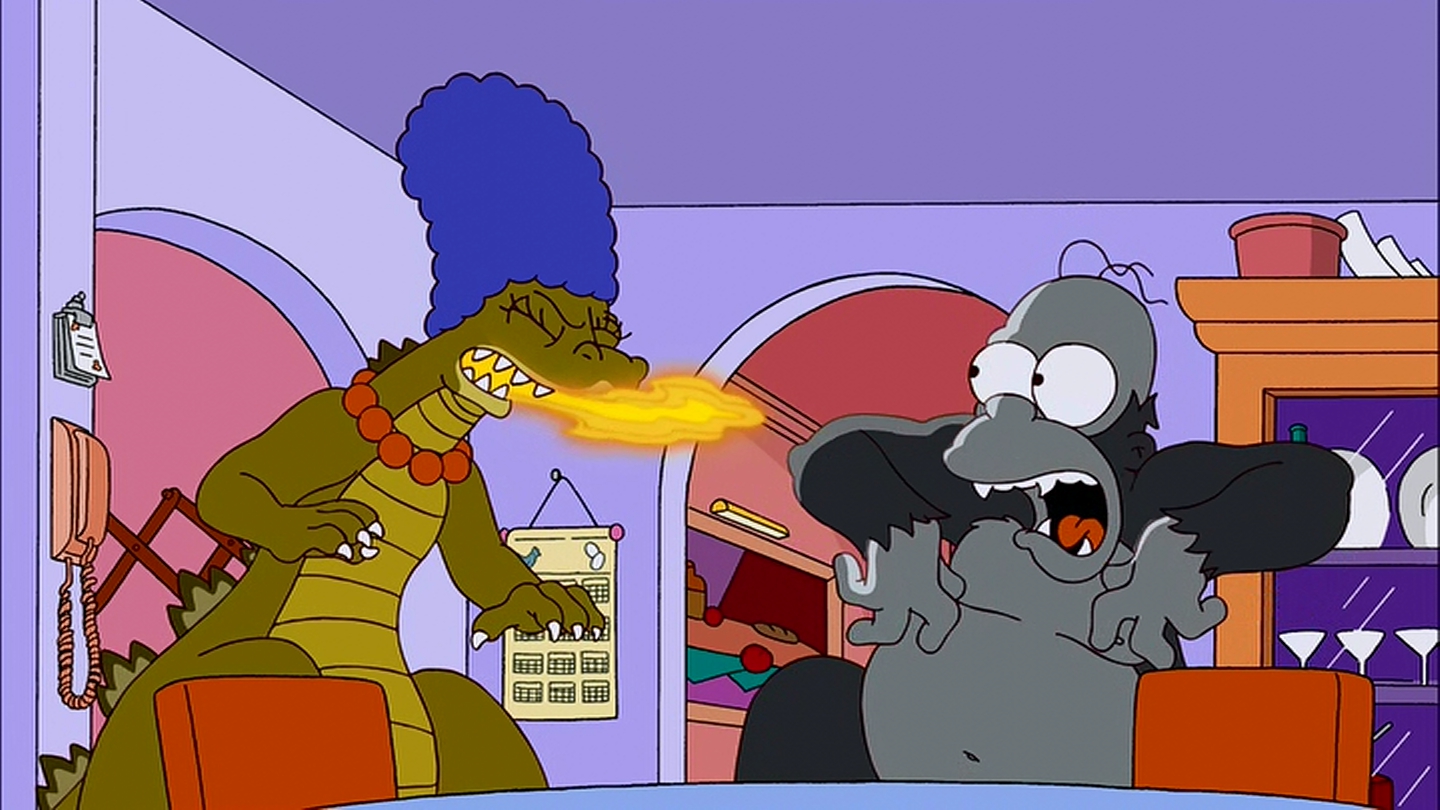 Let's hope that Toho and Sony will release the Japanese version of the film, as they have with every other Showa-era Godzilla film. Perhaps in the lead-up to the release of the 2014 Godzilla

Next up, Godzilla faces his weirdest opponent with a exceptionally strong script.
Posted by John Goodrich at 10:33 AM