As I'm shoveling four inches off the driveway, I still can't understand my obsession with Ancient Egypt. A hot desert land that worshiped the burning sun. What's up with that? Well, back to shoveling...
Posted by John Goodrich at 7:18 AM 1 comment:

Semiotics First Thing in the Morning

Semiotics is awesome because it allows me to break stuff down and gives me a vocabulary to express my thoughts. After taking another bite of Basic Semiotics last night, I woke up this morning with this in my head: “Diablo and World of Warcraft are unappealing to me partially because they present truncated and broken mythemes. There is never any resolution to the plot, only the dispatcher endlessly dispatching, the hero endlessly slaying and gaining a reward. But the acquisition of the object is not the conclusion of the plot, it is a tool to solve the problem.”
Posted by John Goodrich at 7:41 AM 4 comments:

When an artist or a writer borrows, it's usually a good idea to put a twist on when they've 'homaged,' lest they be seen as derivative, or get landed in a lawsuit. This came home to me when this showed up in my mail:

This is a depiction of the famous for horsemen of the Apocalypse, War, Famine Plague, and Death. But the picture really looks a lot more like War, Famine, Plague, and a Nazgul. Look at the guy on the left. His buddies are all in Roman costume, with the crown of olive leaves around Plague's head, and the Roman blade in War's hand. But Death? Pure frikkin' Peter Jackson's Lord of the Rings. 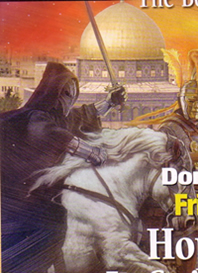 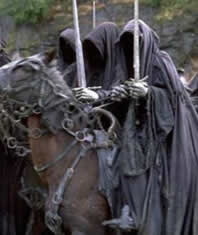 Nice way to hide your inspiration, Mr. Anonymous artist.
Posted by John Goodrich at 8:46 AM No comments: