If I really had nerve, I would leave the review at just the title. If you’re about to be executed, or dying of a painful disease, and need a movie to make that last hour an a half a reason to embrace oblivion, Atlantic Rim: Resurrection is that film. It’s so lazily, stupidly conceived, executed, and then marketed that I would go so far as to call it a blight on moviemaking. You may remember that I loathed Atlantic Rim. Everything about the sequel is worse. Everything.

In the introductory voice over, we’re told that the monsters threatened all life on Earth. Two monsters failing to attack a Florida city and then going on to New York isn't even close. Likely this is a pull from the similarly histrionic 1999 Yonggary, histrionics that are completely not supported by the film. There’s a lot of this in the film, claims in the dialog that are utterly unsupported by the rest of the script.

This image is a reminder of the monsters from the first film: 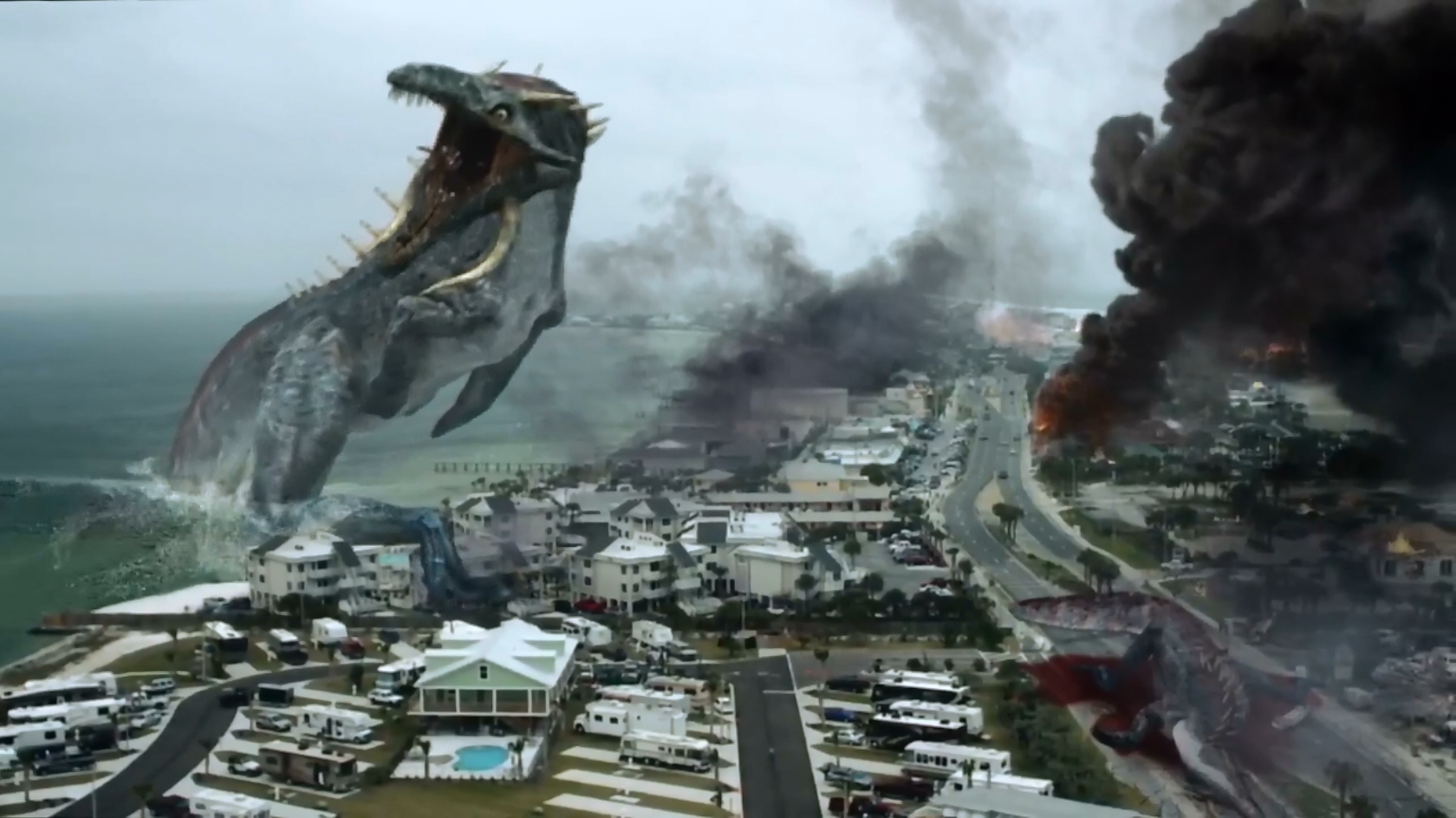 Much of the beginning of the film is a montage of stock military footage, a common way for a cheap production to stretch its run time. Hey, director Jared Cohn, if you’re pulling from Coleman Francis’ playbook, you may want to stop. Cohn’s direction is just about on the level of the Charles Band films, Kraa and Zarkor, only without the competently-directed sequences from SPFX director Michael Deak. I really would have preferred suitimation to the lazy and uninteresting CG we get. Because bad as Atlantic Rim was, they must have cut the budget or found people even less competent. Possibly both.

I like dumb films. Pacific Rim and Rampage weren’t the most sophisticated scripts out there, but they drew me along because they had some interesting ideas and executed them with enthusiasm. But Atlantic Rim: Resurrection isn’t dumb. It aspires to be dumb, but it doesn’t have enough juice. If I were to call it anything, I’d say it was holoanencephalic. The entire film is a holding action until the end mercifully arrives.

The film starts with footage from the first film in order to pad out the run time, and to refresh our memory of the goofy monster. But when the monsters show, they’re completely different. Not just a different skin, or a different color, but literally six-legged as opposed to four-legged. No explanation is given, and in fact the film goes so far as to completely ignore the differences between the monsters. The kaiju don’t even look like what’s on the promotional materials. It’s like Cohn is daring us to like the film, making it as difficult as possible. 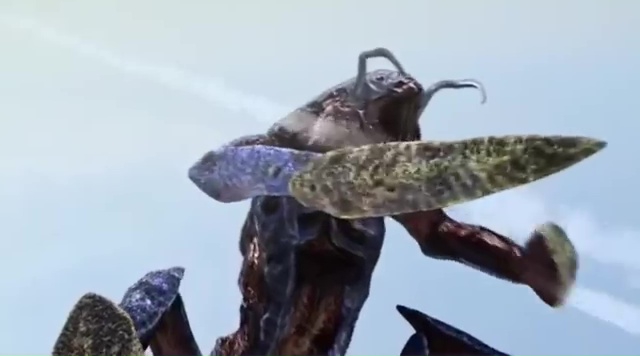 As befits such a basement-level production, the script is also garbage. Six minutes in, the monsters have appeared on a populated beach, but in some random-ass bar, nobody knows that the monsters have returned. Because there’s a lack of cameras, phones, and social media or something. Or because the script is utterly incompetent. Further, nothing seems to have a fixed location. It’s all X miles from the Atlantic Coast. Which isn’t some sort of two thousand mile stretch of America.

When the armed forces have to retreat from the sprawling city, they regroup at sandstone mountains of Florida. Which makes a certain amount of sense, because the promotional blurb says “Los Angeles is under attack by monsters. The mechs attempting to fight them off are better armed than their precursors, but so are the creatures.” Los Angeles is on the Atlantic, right? I mean, it clearly is the suburbs of Los Angeles, but could someone have actually paid attention enough to not list it as Los Angeles in the promotional material? Ha ha, no. Because everything about this production is cheap, incompetent, and performed without thought. 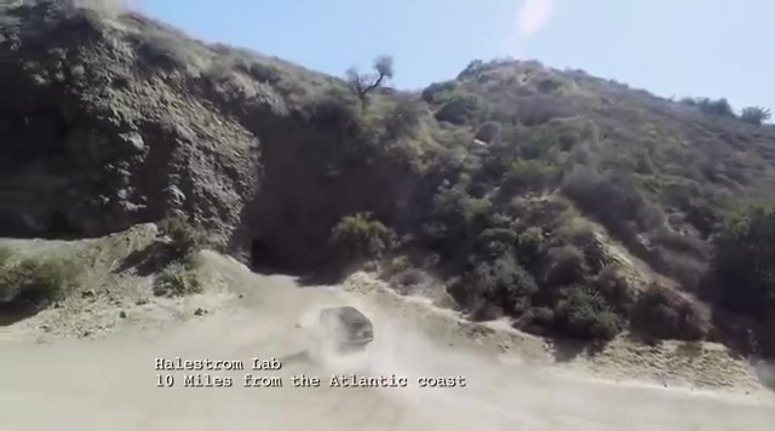 But hey if you wanted a kaiju movie about scientists complaining about competing computer formats, this is totally your film. Because that’s fascinating I mean, sure someone says “One wrong line of code, this whole place is going to blow.” Apparently, they’re writing their computer programs in C4+ or some other idiotic bullshit.

A lot of cues are taken from Pacific Rim. There’s the scientist who might sympathize too much with the kaiju. I don’t suspect Geoff Meed took his cues from the original Godzilla, the dialog is much closer to Pacific Rim. There’s a new neural link that’s used to control the robots. Which doesn’t work as well as the previous interface. Which is stupid. The new control scheme involves long joysticks, which the robot-jocks occasionally jerk around, making them look like they’re playing rock-em sock-em robots. What else did Meed watch? Probably Cloverfield. After the first monster is killed, its body swells and then explodes with smaller versions of the monster. Sort of a reverse Legion from Gamera 2: Attack of the Legion. Only stupid. When the two monsters combine into a single monster, it gains an acid spit, similar to Reptilicus. 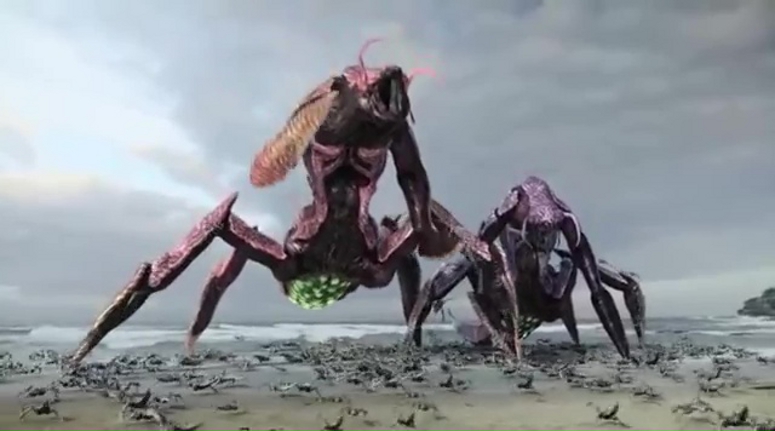 The film also has a certain amount in common with the 1998 Godzilla. The film’s plot solution is not actually a firepower, but a complete bullshit science thing. Half-way through the film, but the plot throws all sorts of mechanical glitches in the way so the technological McGuffin doesn’t get deployed until the film’s run time is running down. I don’t know if that’s a deliberate homage, or if two less-than-stellar scriptwriters had the same idea. I suppose it doesn’t matter, since the bungled results are the same. 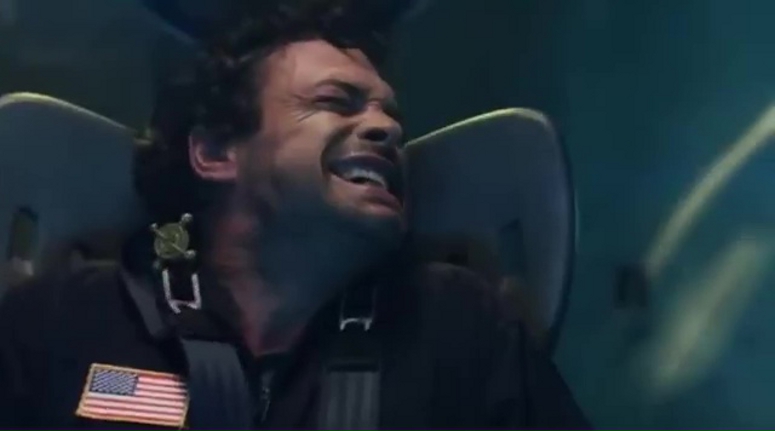 The incompetent script and direction aren’t just lazy and uninspired, though. They actively embrace the worst stereotypes in film-making. Does the black jaeger pilot buy it first? You betcha. Does the black guy who replaces him suicide ram the monster and die? You betcha. And just in case you had some hope because the initial jaeger pilots are two women in addition to the black guy, during the second jaeger fight, the experienced women pilots are locked into a room, and the white scientist, who also knows how to pilot the jaeger, gets to deliver the killer goo that he scienced up to destroy the monsters. White action science guy saves the day while everyone else is sidelined. How original 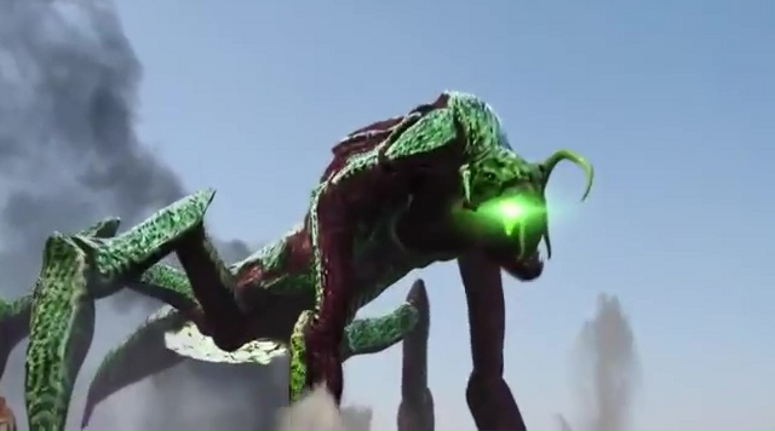 The film raises some real questions about the nature of film making. Is it really dialog if it’s just there to waste time? It's certainly not exposition. There are times that the characters are standing next to each other, telling the audience what they might see if Asylum had a budget. There’s also a surprising amount of travel by car while we get two-second glimpses of the robot/kaiju fight. I mean, technically, this is a movie. It’s a series of still pictures run together to create the illusion of motion, there are people that recite lines they have memorized. But it’s all so incompetently done that it’s not actually entertaining. It’s a masterclass in what happens if you don’t pay attention, don’t care, or possibly have utter contempt for your audience. Monsters demonstrated that you don’t need a huge budget in order to make a decent monster film. However, some good ideas, appropriate dialog, and competent direction all help make a film worth watching. Even less than Atlantic Rim, Atlantic Rim: Resurrection is a desolate void of interest.

Posted by John Goodrich at 4:03 PM No comments: Links to this post