I have copies of the first volume of Cthulhu Unbound in my hands. It should be available at your local bookstore on March 30th, but if you want copies early, there's a book party tomorrow, Saturday the 21st at Bennington's South Street Cafe, 5-7PM. 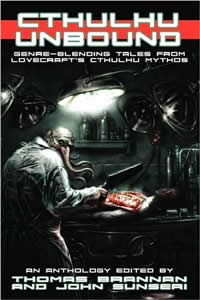 Contents are as follows:
"Noir-Lathotep" by Linda Donahue
"The Invasion Out of Time" by Trent Roman
"James and the Dark Grimoire" by Kevin Lauderdale
"Hellstone and Brimfire" by Doug Goodman
"Star-Crossed" by Bennet Reilly
"The Convenant" by Kim Paffenroth
"The Hindenburg Manifesto" by Lee Clarke Zumpe
"In Our Darkest Hour" by Steven Michael Graham
"Blood Bags and Tentacles" by D.L. Snell
"Bubba Cthulhu's Last Stand" by Lisa Hilton
"Turf" by Rick Moore
"The Menagerie" by Ben Thomas
"The Patriot" by John Goodrich
"The Shadow over Las Vegas" by John Claude Smith
"Locked Room" by CJ Henderson

"The Patriot" is about a man who gets a macabre history lesson while dying in the muddy No Man's Land of World War One. I think it's got the best ending of anything I've written.

For a quick preview, I present you with another Wordle of the story. I like this the composition and atmosphere of this one better. Click on it to see a larger version.

My next project is to make up some "Signed by local author" tags to stick in the books I put on the counter of the Gamers Grotto.
Posted by John Goodrich at 4:33 PM No comments: Links to this post

Labels: Cthulhu Unbound, Unspeakable but not Unpronounceable, words under covers

What did You Do This Weekend?

I was incredibly geeky. My brother came up, and recorded a battle report for a Warmachine fight against the Master Painter and his mercs. Here's the first part of the battle report, which look to be more interesting that the battle itself.

Thanks, Iren Bear. This looks awesome.
Posted by John Goodrich at 12:52 PM No comments: Links to this post

This awesome lady and her sign were seen at a Chicago counter-protest of the Westboro Baptist Church: 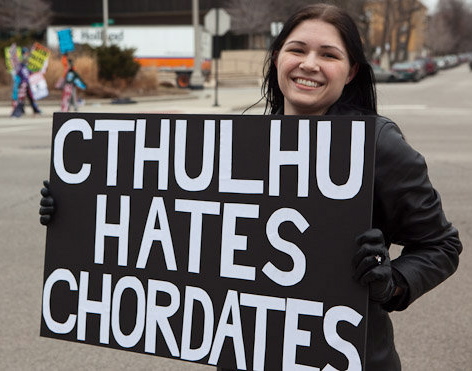 Today is full of win.
Posted by John Goodrich at 9:40 AM No comments: Links to this post

Labels: Unspeakable but not Unpronounceable

The Problems with Pundits

I try not to blog my politics. There's a hundred better-informed political blogs out there. However, the pundit problem is starting to piss me off. I see a lot of people blindly accepting their conclusions, then repeating those views on message boards and in conversations.

There are several problems with this.

1) First and foremost, no one should take what anyone says without thinking about it. This is so basic that it should be obvious.

2) No pundit has ever had to compromise with another lawmaking body. Democratic laws are made by compromise. A pundit never has to worry about what the members of other branches of the government have to say about it. The majority of their proclamations are unusable for this reason.

3) Hypothetical enactments never run into unintended consequences. When Idi Amin Dada (yes, I'm comparing the average ego-bloated pundit with a mass-murdering dictator with a massively overinflated ego. Often, I feel the difference between the two is opportunity) threw all the Asians out of Uganda, it seemed like a great idea to him. However, he didn't realize he'd gotten rid of his country's middle class, which was disastrous for the economy. Ooops. Since pundit proclamations never have to deal with reality, their hypothetical solutions never have unforeseen consequences.
Posted by John Goodrich at 7:04 AM 2 comments: Links to this post

So I've been updating my website, a nip here a tuck there, changing the title of the anthology that was renamed six months ago. And while checking for webrot, I discovered that the 2007 Horror World gross-out contest I placed in has gone away.

So I now offer you the chance to read my gross-out story "Champagne" free on my website. And yes, it really is pretty gross.
Posted by John Goodrich at 9:44 AM No comments: Links to this post