The Run-Up to Cthulhu's Dark Cults

It's been a log time coming, but Chaosium appears ready to release Cthulhu's Dark Cults this summer. This anthology has my story "Captains of Industry" in it.

David Conyers, editor of the anthology, is putting up snippets of the stories, as well as notes concerning the stories' creation on his blog. And it's my turn today.
Posted by John Goodrich at 7:20 AM No comments: Links to this post

Why Computer Games Aren’t Perceived as Art Yet, and Why That’s Unfortunate 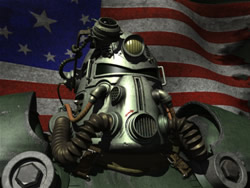 A friend on Facebook is annoyed that Roger Ebert doesn’t think computer games are art. He’s enormously into computer games, and thinks that should be treated as art. The problem is that they won’t be, not for some time. I've identified four major reasons for this.

1) Grind. The leveling and power-gaining apparatus of most plot driven games (RPGs) (first person shooters tent to rely on acquisition of equipment) are such that they require the player to engage in dozens, if not hundreds of combats that are not germane to the plot. As such, grind and random encounters place the main plot on hold. At this time, great works of art are analyzed in such a way that everything is important. See the creations of William Shakespeare and Charles Dickens. Wordy they may be, but in modern critical thinking, nothing is wasted, and everything in them contributes to the overall effect and greatness of the text (using “text” in the semiotic sense, the work of art as a whole). Nothing is repeated, nothing is there specifically to make the text longer. In any other art form, repetition of minor elements that do not contribute to the overall effect is called padding, and is understood to the impact of the text. In computer games, it’s expected.

2) Impermanence. The Microsoft Windows platform is at least polite about backwards compatibility, although God and Heinlein help you if you try to work with one of those games with XML memory usage, or proprietary memory extender. Games created for Windows are generally workable, however it’s quite possible that the average user won’t be able to get it running and not know why. One of the tenets of great art is that it can withstand the test of time. How can we introduce our friends and colleagues to good, older games if we can no longer play them?

The game industry itself has little interest in games that are not recent. It’s very bang and bust–make a big hit, get the money, and then the game is forgotten for the next new shiny one. Sometimes, there’s an extension or additional downloadable content, and a game gets a gold, Platinum or Game of the Year edition. Yet good games are seldom available again after a major media shift. If you own a game on 5.25" or 3.5" disks, you’re probably out of luck. If the game was on an Amiga, or any other no longer extant computer architecture, you’re almost definitely out of luck.

Platforms, with one exception, are even worse. A limited number of PS3s can play PS2 games, and those were the first wave available. The current ones cannot. There’s a strict list of Xbox games that can be played on the X360. Only Nintendo made its most recent generation (the Wii) fully backwards compatible with its previous generation (the Game Cube). Much of the computer game industry does not take game longevity seriously, apparently believing that no one wants to play a game more than five years old. I can think of three franchises that have moved older games onto newer platforms: Wing Commander (now dead for a decade), Fallout, and God of War. I’m sure there are others that I’m not familiar with, but these updates remain the exception rather than the rule. If the industry itself regards games as cheap, throw-away trash to be forgotten in a few years, why should anyone else regard them differently?

There is no language of critical apparatus within the video game community. There are awards and reviews, but there really isn’t anyone writing about the underlying structure of the games, dissecting them in a public forum to see what makes them tick.

It took Alan Moore and Watchmen to make critics look at (some) comics with a more serious eye. It wasn’t until this decade that Pop Matters started publishing books of essays on television shows (thank you Joss Whedon and Buffy). Computer games are going to have to wait until the generation that came up playing them become tenured professors and start writing critical essays about them. And even then, they will need a champion, a well-respected individual who comes lays out a difficult-to-refute case that video games should be considered art, and then hammers the point. ST Joshi did this for HP Lovecraft.

4) Complexity: Much modern criticism is celebrity-based. There is discussion of a Kurosawa film, the oeuvre of Scorsese, a Joss Whedon series. This singling out of individuals who are responsible for the brilliance of a film undercuts the contributions of the hundreds, or thousands of people who made minor contributions small but telling contributions to the completed work. It can be said that the director of a film deserves praise for all decisions, because they selected competent individuals whose artistic sense agreed with their own, but the fact remains that the director does not make all decisions, and film is very much a collaborative art form.

Modern criticism is based on literature, where a single individual is responsible for the creation of a work. It is easier to praise the individual at the helm of a film, as it were, because it is often impossible to say who made a particular decision. Was it the director of photography that suggested a particular shot? Did the actor or the director suggest an affecting line reading? Listening to commentary may help, but the creation of the work is so moment-based that the individuals involved sometimes disagree on a decision.

How much more difficult it is in computer games? Does the praise for a particularly beautiful set piece go to the Project Coordinator, the Lead Artist, or Visual Coordinator?

That said, I think analysis of computer games is important, precisely because it has become such a pervasive commonality in our culture. What are the underlying themes (and yes, these things affect us whether we realize it or not) that are being underscored in individuals minds as they play Modern Warfare 2? How is that likely to affect individuals attitudes toward armed conflict when they are asked to vote for or against involving their country in such a conflict? How do Mario game players perceive non-game intellectual challenges, such as at work? I don’t know, but these questions cannot be answered in a satisfactory fashion until games receive serious, rigorous, scholarly attention.
Posted by John Goodrich at 4:40 PM No comments: Links to this post

As far as I can tell, ANZAC Day is the last memorial day specifically dedicated to World War One. Which is sad. Nothing defined the Twentieth Century more than WWI: The rise of the Soviet Union, Nazi Germany and WWII, and the arising Cold War all have their roots in the the Great War of 1914-1918.

Most of us would rather remember WWII. It was a more clear-cut war, with the Nazi atrocities making the opponent easier to demonize than the Central Powers of World War One. The victors could feel good about winning WWII. But the Great War was a quagmire, an enormous mess that scarred the "lost generation" and wiped out entire British neighborhoods, thanks to the Pals Battalions, sometimes in a matter of hours. Ah, the glory of war.

Rather than my usual mournful trench poetry, this one is a touch more playful:

"The General Inspecting the Trenches"
by Alan Herbert

The General inspecting the trenches
Exclaimed with a horrified shout
'I refuse to command a division
Which leaves its excreta about.'

And certain responsible critics
Made haste to reply to his words
Observing that his staff advisors
Consisted entirely of turds.

For shit may be shot at odd corners
And paper supplied there to suit,
But a shit would be shot without mourners
If someone shot that shit Shute.
Posted by John Goodrich at 12:10 PM No comments: Links to this post

And next... off to fight a Green Knight

Having had a long, slow slog getting back to being energetic... I'm not thinking about myself as having Seasonal Affective Disorder. After all, I'm not so depressed that I can't get out of bed. I just miss the sun (see my Floating down the Nile posts) when it's not up for eight hours. But I'm not thinking of it as SAD. I am, however, scknowledging that I do slow down during the winter months.

I'm starting to refer to it as "Celtic Solar Hero." Gawain, in some stories, gains strength as the sun goes up during the day, and slowly loses is as the afternoon wears on. There are a few other examples of this sort of hero, none of which I can think of offhand. But I now think of myself this way. Although the sun remains a burning ball of hatred when its on full blast, it's also a source of strength.
Posted by John Goodrich at 2:37 PM No comments: Links to this post

Labels: personal, the myths we tell ourselves

Watching from a distance

Sometimes, a new picture can make me reassess something old and familiar. I haven't visited the Astronomy Picture of the Day archive in years... and I started again this morning. I am stunned by the beauty of the universe. This picture of the sun is one of the most amazing images I can remember seeing. A "simple" solar prominence, but the surface of the Sun has never looked like that before.

We are surrounded by beauty, sometimes, we have to look for it.
Posted by John Goodrich at 9:38 AM No comments: Links to this post

Ellen Datlow's annual Year's Best Horror list is out, and "The Patriot" is in the list! Take a look, there I am, sandwiched between Cody Goodfellow and Theodora Goss.

I'm dancing the happy dance now!
Posted by John Goodrich at 6:57 AM 1 comment: Links to this post