I stocked a copy of Space Hulk last week. I was going to ask the store owner to hold it aside for my brother, but he wasn't in, so I didn't. I put it on the shelf.

Only it turns out I didn't. Because the product is not out yet, and because it doesn't look like I remember.

Holy shit. I know it didn't happen, but I can remember it, I remember being surprised that it was thinner than expected, and I remember the cover art, which was the same art for the computer game which I bought more than six years ago. It is nothing like what the game's cover art used to look like, nor is it like what the game will look like when re-released.

Holy shit, I still can't believe it didn't happen. I remember it. Images and emotions, like I remember kissing the Queen of Science this morning.

And I'm worried. Yeah, stress and all that, but I've never remembered something that didn't happen.
Posted by John Goodrich at 4:48 PM No comments: Links to this post

Not Again Soon, I Think

Carmen is a success. Not a financial one, not yet, but certainly an artistic success. Although the audiences have not filled the theater, they have applauded long enough that we have taken two and three company bows. So clearly, a lot of something is going right.

It is not, however, a personal success. I'm not enjoying the performances. I spend a lot of time backstage, and I think about what I want to be writing. Which I would be doing, if I wasn't in this opera. Don't get me wrong, I'm working with remarkable people who are very artistic and completely not divas. They're all down-to-earth and very practical about their work, and good fun to be with.

But I'm not enjoying it. I'm not getting a thrill out of audience attention, I'm not serene and satisfied at the end of the performance. It's just work. Hot, time-consuming, unpaid work during which which I am frequently uncomfortable. What am I getting out of this again?

It feels like acting, like writing, is something a lot of people aspire to, and those who love it will pursue it. As a result, there is a glut of wanna-be-actors, and directors feel that can do as they wish because there's always someone else who wants to act (or, in this case, sing).

It's significant that I didn't audition for this part, as the majority of the rest of the cast did. In fact, I understand the competition to get in this was pretty fierce. But I didn't have to audition, I just walked into the part.

Not again soon, I think.


On a different topic, David Conyers has a thoughtful essay on why he enjoys collaboration. I don't link to this specifically because he mentions me, but he does mention me.
Posted by John Goodrich at 9:06 AM No comments: Links to this post

Labels: The opposite of people, writing

It's All About Me

As from Commentary! The Musical.

I have managed to work my Carmen character, Lilas Pastia, from background character to the major force for all the unpleasantness in the opera. Before, I was simply the tavern-keeper and Carmen's pimp, the stock character of the crooked tavern-keeper cut from the same cloth as Les Miserable's Thenardier. Now, I push Zuniga (Don Jose's commander) onto Dom, Jose's knife, and blame him for it. In the next act, when we fight and he kills me in a fit of vengeance, my death has become the defining break between him and Carmen.

So the spiral of operatic death in this production of Carmen is all my character's fault. Not bad for someone who doesn't sing, and basically came in as a bit part.
Posted by John Goodrich at 8:36 AM No comments: Links to this post

Labels: The opposite of people

Yeesh. With the writing and the working and the opera, I haven't had much time to say anything on this blog.

I've been watching some more Godzilla, and discovering the magic of composer Akira Ifukube. I didn't realize how much his scores contributed to the Godzilla films I liked until I realized how affecting that trumpet riff from Ghidorah the Three-Headed Monster is. Other composers seem dated or just plain strange, witness the the samba-influenced work of the late 60's and early 70's Godzilla films. Ugh.

But I got a major worry off my chest; I've started submitting stories to venues again. This morning I sent "N is for Neville" off to Dark Faith anthology.

Carmen opens in less than a week.
Posted by John Goodrich at 10:00 AM No comments: Links to this post 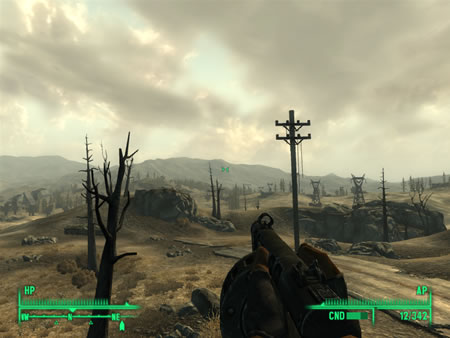 It took me two days to read Cormac McCarthy's The Road. It's been some time since I read a Pulitzer Prize-winner. I've read Executioner's Song and intend to read Klavier and Clay, especially since Michael Chabon has a story in an upcoming Lovecraft tribute anthology. I expected some excellent writing.

Just after I'd cracked the book, I walked down to the post office with it in my hand. I never go to the Post Office without a book, and I think you know why. On that day I was told twice, both time by older (over 65) individuals whom I did not know that the book was depressing. I did not retort that because I had read a lot of Harlan Ellison post-apoc stuff, I was expecting hugs and puppies. I like post-apocalyptic stories. I've enjoyed the Fallout games, as well as Canticle for Liebowitz, I am Legend, Gate to Women's Country, as well as Beyond Thunderdome, Damndation Alley, and various other films. I would call myself well-read in the genre, but I've got some background in it.

Unfortunately, The Road tugs on a heart-string I don't seem to have. As with Dan Simmons' Children of the Night, the story tugs very heavily on the child in peril theme. Which, apparently, doesn't work with me. So there is a dimension to the story that was clearly missing for me, especially as the whole book is the relationship between the unnamed man and his child.

However, I had a lot of difficulty getting past the inconsistencies in the story. One might say that the story is a fable, and therefore the details don't matter, but the details do matter.

Problem; they are constantly discovering dried corpses. At the same time, it is constantly raining. Now, it never rains when they discover the dried corpses, but some are leftover from the cataclysm (never mentioned). How is it that these dried bodies survive in such a wet environment? Wet encourages rot, unless all the microbes are gone. Which, I suppose is a possibility. There are no living trees in the book, no living plants at all, and no animals, either. To me, it seems strange and unlikely that all the plants are gone. Without them, what is producing the oxygen that the humans breathe, especially after large areas were burned, consuming much oxygen?

Ecosystems change, adapt, and abide. The real problem with a nuclear war or other major disaster is not that it will destroy all life on earth, but that it will wipe out humanity. We are far more sensitive to changes in condition than the entire ecosystem of the Earth. Mass extinctions have happened before, and life always has found a way.

The Devil, as they say, is in the details. And while the plot of The Road was engaging, and the use of language clever, the above details threw me. I try not to be a hard-science asshole, but this bothered me, and lowered my opinion of the book.

As post-apocalypse literature, I thought it was OK. Gate to Women's Country beats it by a country mile.
Posted by John Goodrich at 3:52 PM No comments: Links to this post