Making Our Own Fun

I have a friend who hangs out at the Geek Bar and complains that there's nothing to do in town. He was recently fired, and is looking for a job in larger cities, like Denver. I say go for it. Everyone should decide for themselves the size of the place they want to live in, and you don't know what you'll like until you live there for a while.

But I laugh at him when he says he's bored. It's a lot better to be creative and self-entertaining rather than waiting for the world to come to you. As Harvey Danger said in “Flagpole Sitta,” "If you're bored then you're boring." I find there's too much entertainment out there, and I don't have enough time to get to everything I want.

This morning, for example, the local fire department burned a house down. The local paper announced it, so we went out and sat in our car at 6:30 in the morning to watch.

I've never seen a house burn down before. Not live, not from beginning to end. It's surprisingly slow, with a lot of billowing smoke. And then there's fire licking out of the roof, a whole lot more smoke, and suddenly the whole thing is going like a bonfire.

These photos are presented in order, but there isn't any set time between them. I just snapped pictures when things seemed to be interesting. 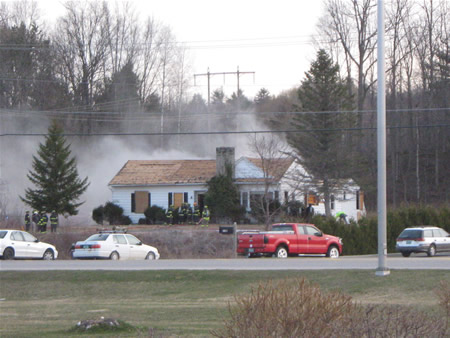 About fifteen minutes after we saw the first puffs of smoke. 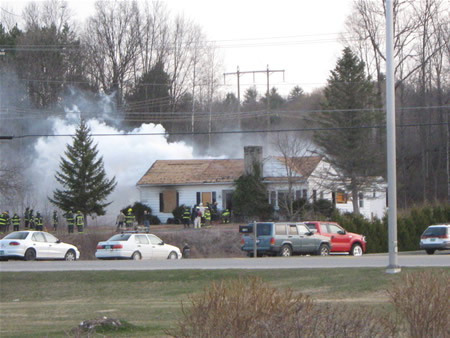 Maybe twenty minutes into the process. You can already see how parts of the external roof are charring. 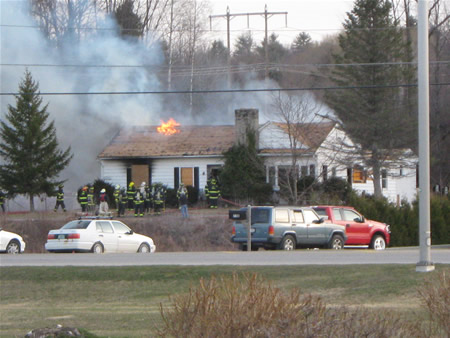 Twenty-five minutes in, we get the first visible fire on the roof. They'd taken the tar shingles off the roof earlier, which probably kept this from getting messy. 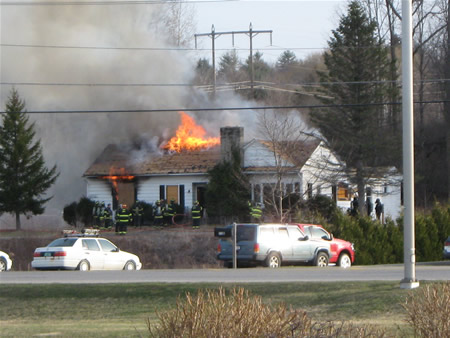 Not much later. You can see smoke damage and burn to the left of the leftmost window. 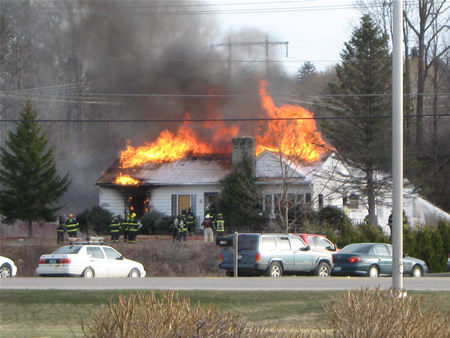 The house is pretty much unsavable at this point. 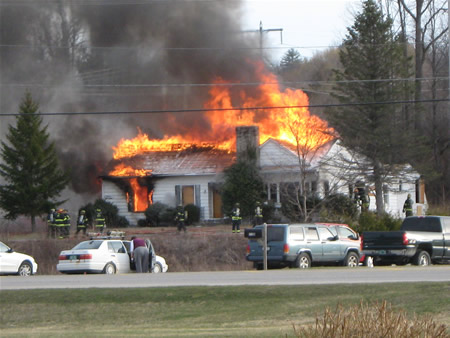 The particle board that covered the left window is gone, and you can see it's an oven in there. You can also see the rafters in the roof. Watch the difference between roof between this and the next picture. 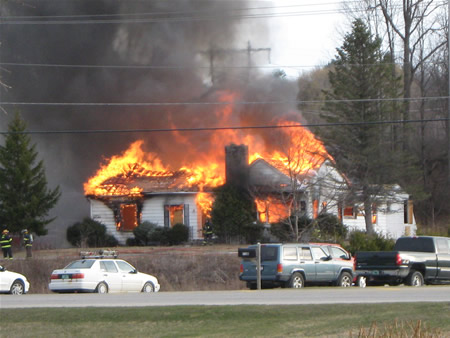 The ridge of the roof is sagging badly, and the place is coming down pretty soon. I wouldn't want to be the firefighter that walks into that. 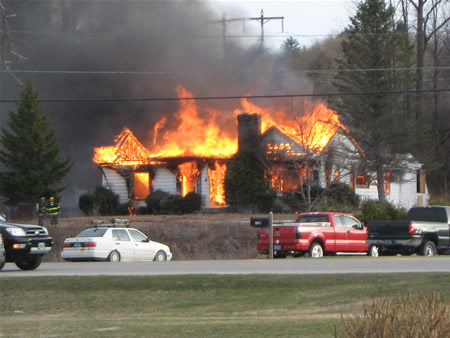 The roof has collapsed. When you see a fire on a TV show or a movie, it pretty much is at this stage. It doesn't last very long without a lot of accelerant. 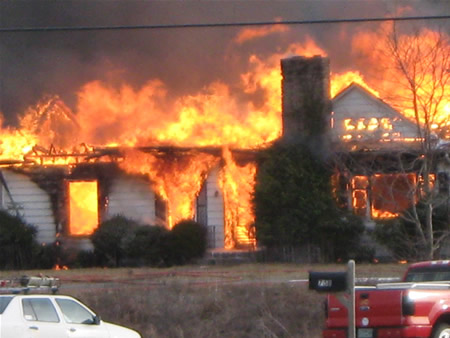 I've never watched a house burn down, and hope I never do unless it's another controlled demolition.

It'll go into a story some day.

Oh my GOD it HAS a NAME!

The Dunning-Kruger Effect: why the incompetent don't realize they're incompetent.
Posted by John Goodrich at 8:28 AM 3 comments:

I've been underemployed for close to a year and a half. I need to get a better job. I've been on the job search for the past year, but it has been unsuccessful. The key to getting there is to make the search it a part-time job. To pound at the search relentlessly until something cracks.

Two people in the writing group have send me notes about how much they're enjoying the Current Project. That's unprecedented. The story, if I do say so myself, is very good. It will be published after it is finished and polished. And, on Saturday, I received my first pro-pay check for a story ("The Dark Horse" in Cthulhu 2012). That's something I've wanted for a very long time.

But right now, the short-term goals are more important than the long-term ones. And hopefully, when I have a new job, I'll be able to return to writing with a renewed sense of urgency. But I'm not very happy right now.
Posted by John Goodrich at 9:04 AM No comments:

Pseudographia, How I Love Thee...

What would the Star Wars saga be like if it were really a saga? Old Norse scholar Jackson Crawford has given a sample of how it might look. He has written an article about Tattúínárdœla saga, the Saga of the People of the Tattooine River Valley, complete with snippets of Old Norse.

As someone who loves sagas, this is a brilliant piece of literary nonsense; pseudographia.
Posted by John Goodrich at 11:51 AM No comments:

If there's anything that makes you feel like a part of the writers' community, it's getting an invitation from people whose work you respect. Over the past couple of months, I've received several invitations to submit to projects. It's a warm feeling.

Part of the reason I decided to write was because I like talking with them. I listened to Tim Powers speak at a book signing, and I knew that I wanted to have conversations with him and people like him. At NECON, I have spent wonderful hours talking about ideas with other writers. It's unimaginable fun to sit in a group of people who are throwing out ideas, with other people knocking them in utterly insane directions.

To my delight, I'm getting there. Hard work pays off, as does having the right phlebotomist.
Posted by John Goodrich at 8:08 AM 3 comments: