It's Been a Week! What Have I been Up To?

Who's a bad blogger who hasn't updated in a week? Yes, that would be me.

That said, I got both short stories off, (one has already been accepted, but it's Sekrut until I am given the green light). With those done, I was thinking about writingt a story for Cthulhurotica II, but I've just been itching to get back to the novel I put down a year and a half ago. And yes, it's bad to stop writing a novel, but I was back in school and all of my time and much of my brain was eaten by Chemistry.

I love writing this novel. I started it because I overall dislike its genre, and decided to find a way to make it my own. Could I write a novel about something I didn't love? The answer, at 57,000 words, is yes. And novels give the writer a chance to breathe, to expand on their ideas, keeping an eye on the pace, but without the intensive crunch and relentless word-counting of short stories. I still like writing shorts, but there's a liberty to a novel that lets me really develop character and plant foreshadowing and become very complex. Of course, I'll have to sell said novel, and that'll be a good indicator as to whether I was successful.

I've been having fun (and a bit of frustration) with the 20-year old Red Baron game. My reviews of pre-1990 WWI flight games are all done, and I'm wondering if I should blog them, or just make a new section of my website. Unfortunately, playing and writing about premodern flight sims is scratching my nonfiction writing itch, which is cutting into my blogging. 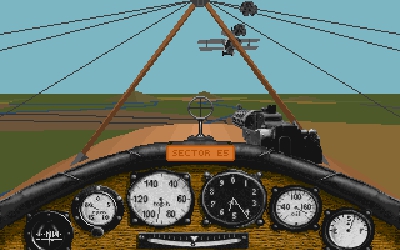 I've just torn through a novel, the first time I've done this for some time. Three Cheers for Me is the first of a series of comedy novels about a Canadian flier in WWI. The Bandy Papers series is sort of a combination of Wodehouse's Bertie Wooster and W.E. Johns' Bigglesworth, goofy social novels, uniquely Canadian, with the protagonist flying about in a Camel. I plan on getting the next couple of novels (until the end of the Great War) at least.

And it's time, past time, to get my shorts back out on the market. I've got a number of shorts that have not sold, that I think can sell, but haven't had the time or inclination to put out there. I'm thinking about saving "Nicaragua 1986" for Shroud magazine, partially because I want to appear under the same cover as Brain keene. But "Three Dreams" "Too Short For an Angel" and "Ultra-Fast Delivery" all need to get sold.
Posted by John Goodrich at 9:09 AM No comments:

We Will Only Pass This Way Once...

If you've got sharp eyes and pay attnetion to details, you will notice that there's a story in the 'published' section of this blog that is not on my web page. "Death on the American Family Farm" was sold to Undead Press's anthology Book of the Dead, one of several presses run by Anthony Giangregorio. Anthony has been at the center of some controversy recently, and I think it's time I weighed in on this.

The critics, including Brian Keene, Nick Mamatas, and several people who Anthony has bought stories from, are right. Undead press and Anthony Giangregorio are ignorant, unethical publishers that I wouldn't to go near if they offered ten cents a word.

Ultimately, this is my own damn fault. I was just starting out, I was looking for a sale to boost my ego, so I sent a story off to a penny-a-word publication. And I got in. And that was the beginning of my trouble.

Giangregorio called me. On the phone. Helpful hint to gentle readers; if you have Brooklyn accent, people will already thing you're a used-car salesman. Trying to hustle them by asking if they have any other stories is a big put-off. So when he asked, I said I didn't. Which was a lie, but I felt like I was getting hustled. Which, it turned out, I was.

The Book of the Dead was published, and immediately came under attack. In those days, I hung out at the Shocklines forum, where a lot of horror professionals (and a few schmucks) talk shop. John Skipp, co-edtor of the seminal 80's Book of the Dead objected to Undead Press's use of his title. Like a real pro, Giangregorio got defensive, pointing out that you cannot copyright a title, and was really rude to the person he claimed the anthology was an homage to (See Nick Mamatas' documentation of this on his blog.

A few days later, it came to light that Giangregorio had used characters from the Dawn of the Dead, which is an enormous copyright no-no, and also completely frikking stupid.

I don't think that the illustrious Mr.Giangregorio messed with my story, but by the time I had one in my hands, I was already too embarassed to read it. I have a single copy, and it's not even in my personal collection of my work. I won't give him a blessed dime. It seems like he's getting worse, no longer content to merely suck, he's inserting bestiality and bad grammar into stories he's bought. See Brain Keene's blog for this sack of crap.

Be smart. Know your publisher, and if somethig smells fishy, it probably is. The reek of something like this is very hard to wash off, even if everyone else has forgotten about it.

Now, let's never talk about this again.
Posted by John Goodrich at 1:06 PM No comments:

It's a known fact that the Sopwith Camel killed more pilots in trainng than were shot down flying it. And I've just spend an hour and a half training to learn a tempermental, difficult-to-fly biplane. And this is what is referred to as a steep learning curve. NO, I didn't crash these planes deliberately for the picture. YES, I'm still playing on novice. 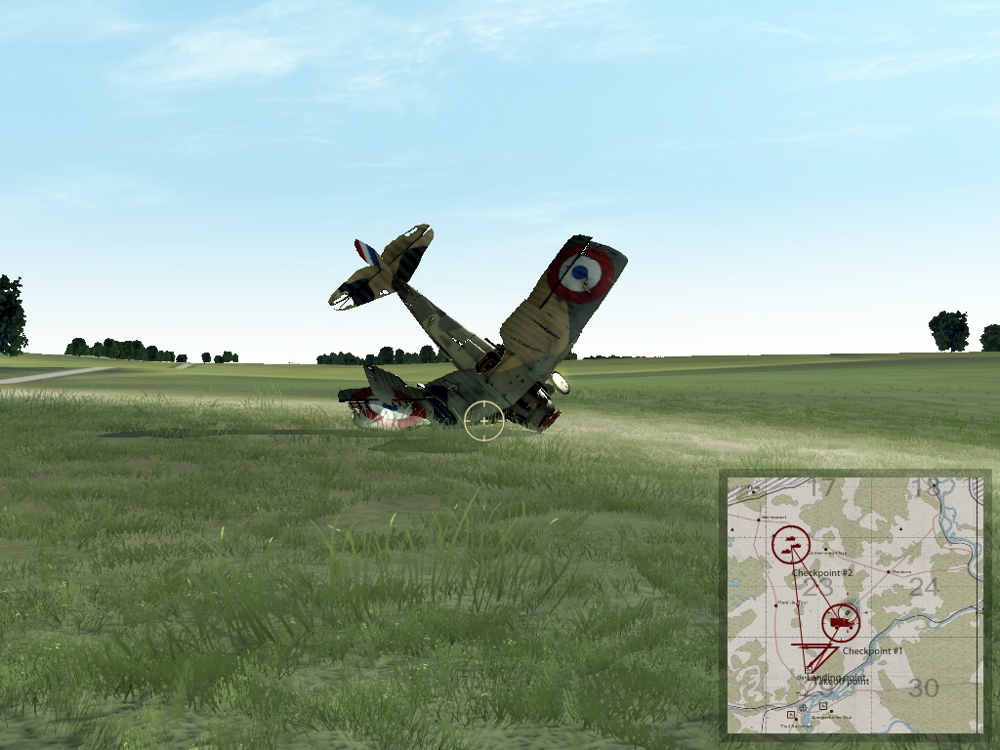 Failure to pull up after a strafing run. 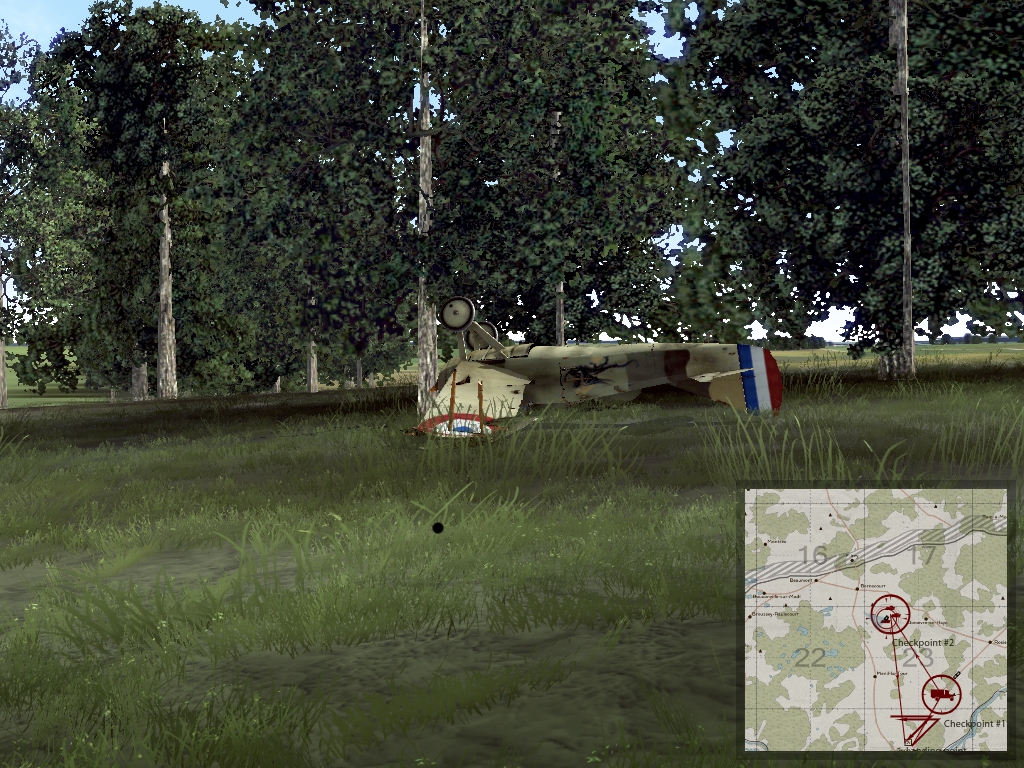 Thwacking a tree during a low-level strafe. 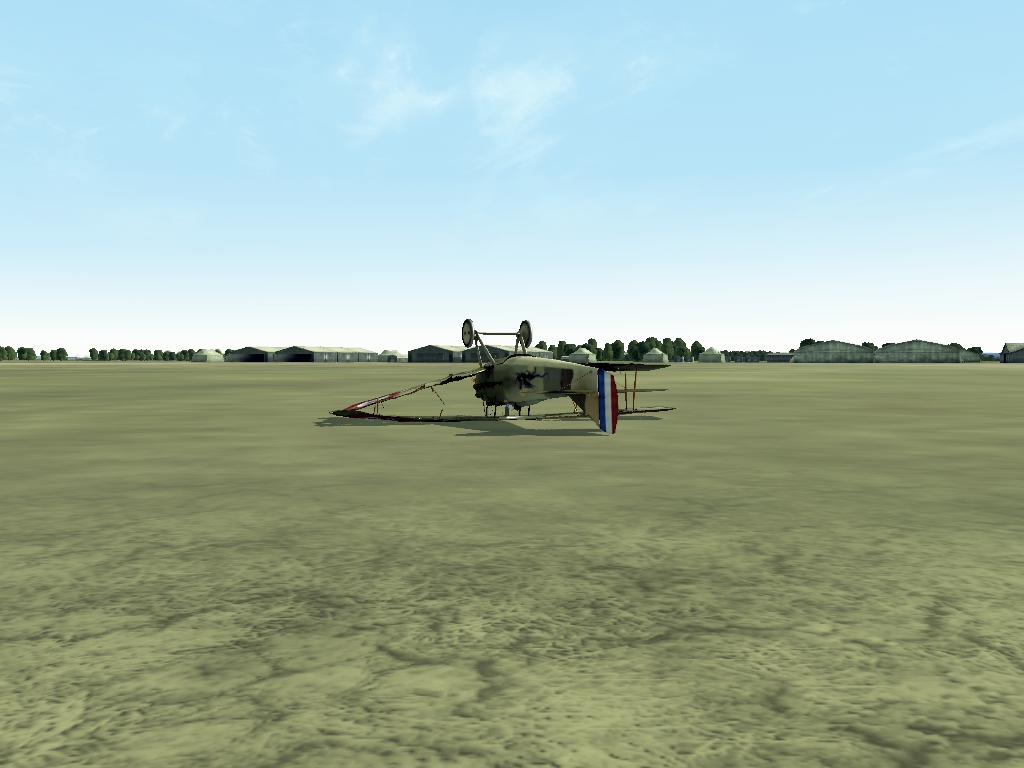 What happens when I fail to gain altitude during take off. 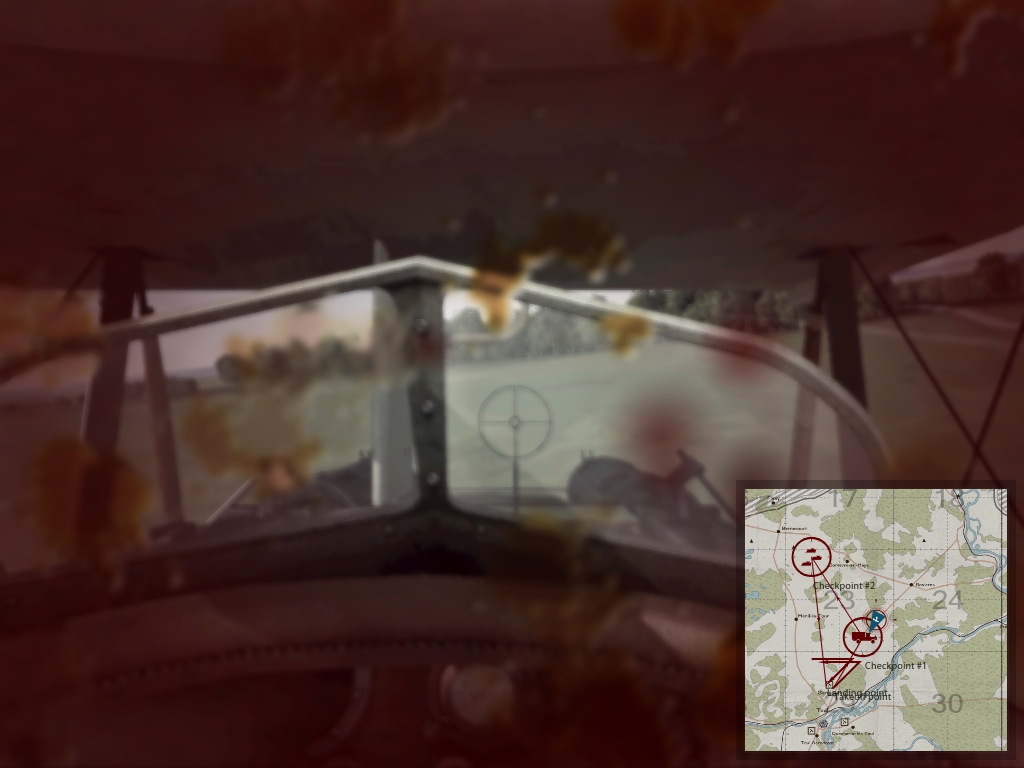 What it looked like inside the cockpit about half a second before... 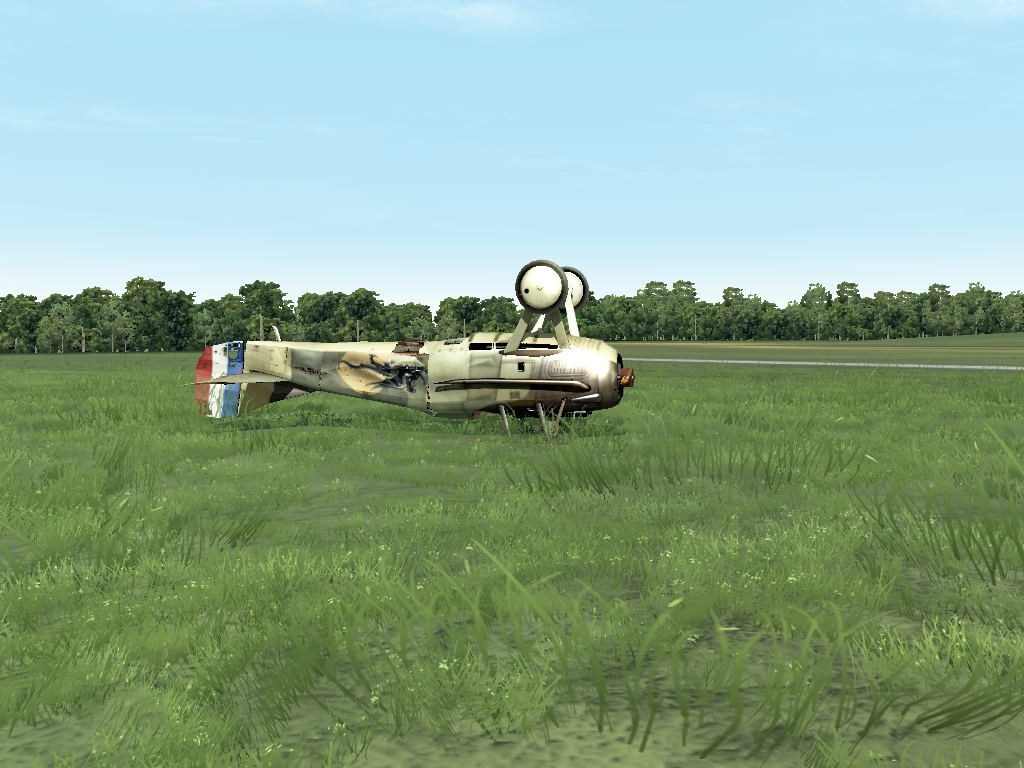 I concentrated too much on the target, not enough on my altitude. 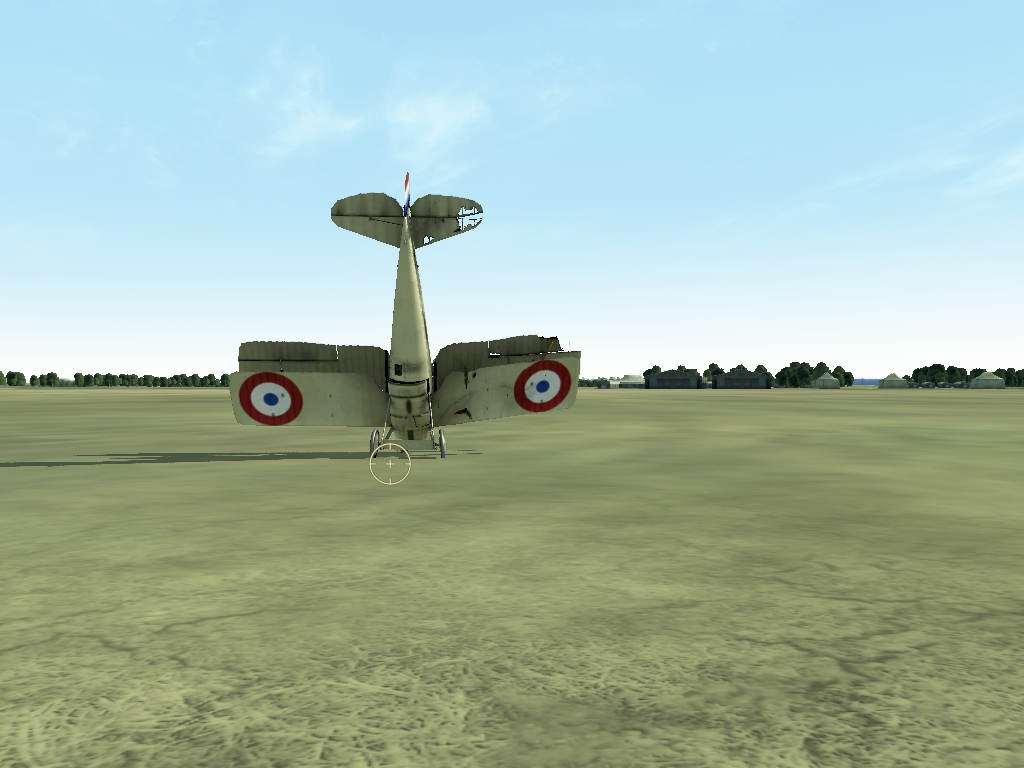 This is what happens when I overconpensate for the engine's radial precession. 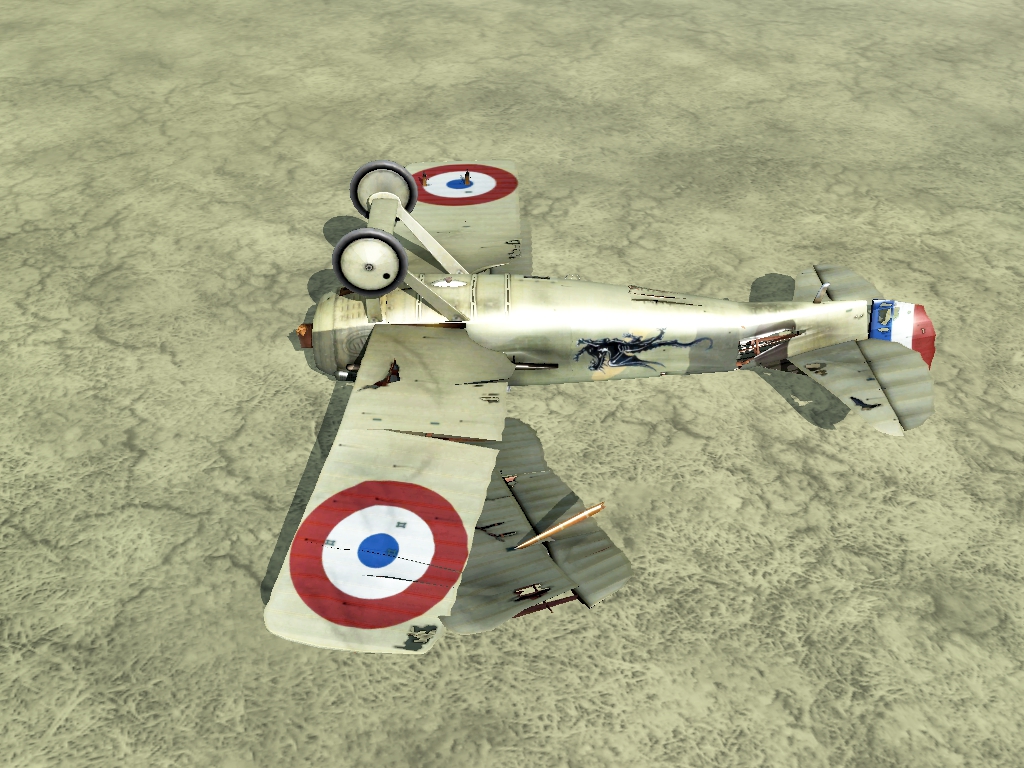 For this one, I tried to take off before I really had enough speed for sufficient lift. 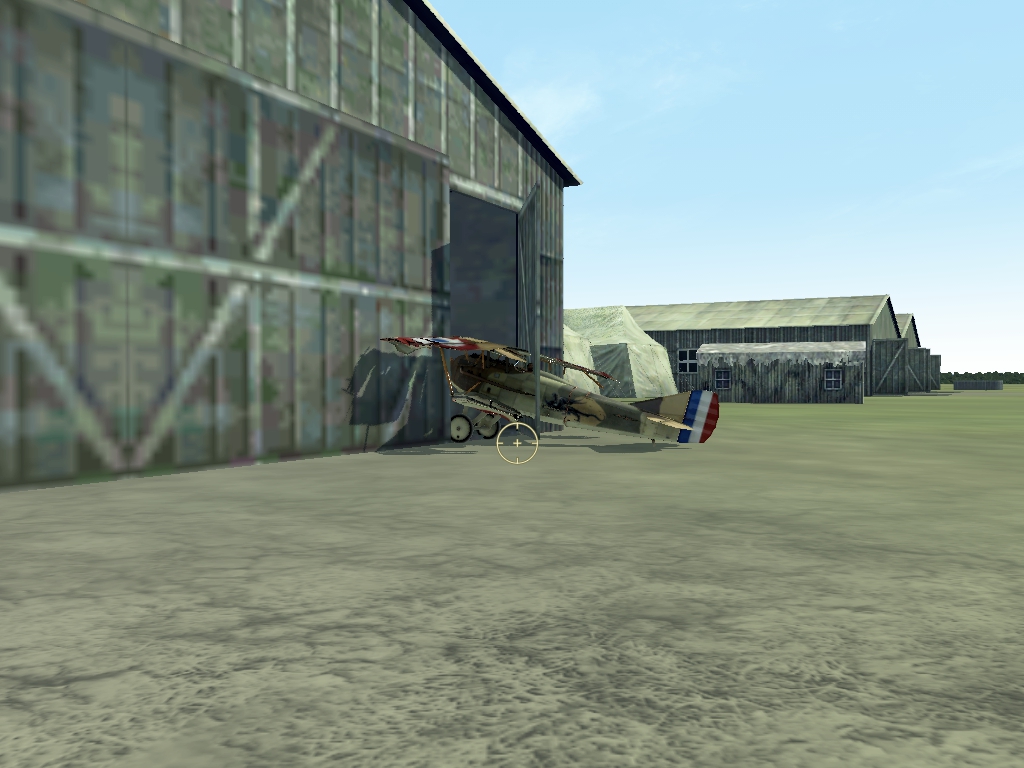 Failure to gain altitude over hangar. 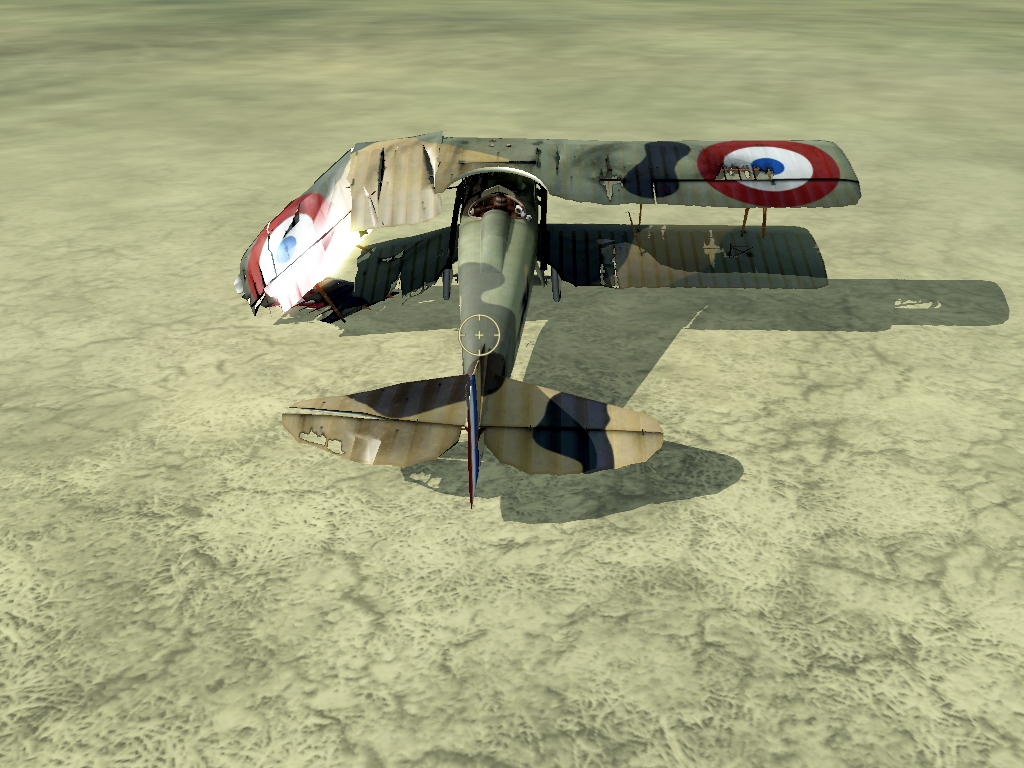 Rocking the plane too much on take off damages the wings. 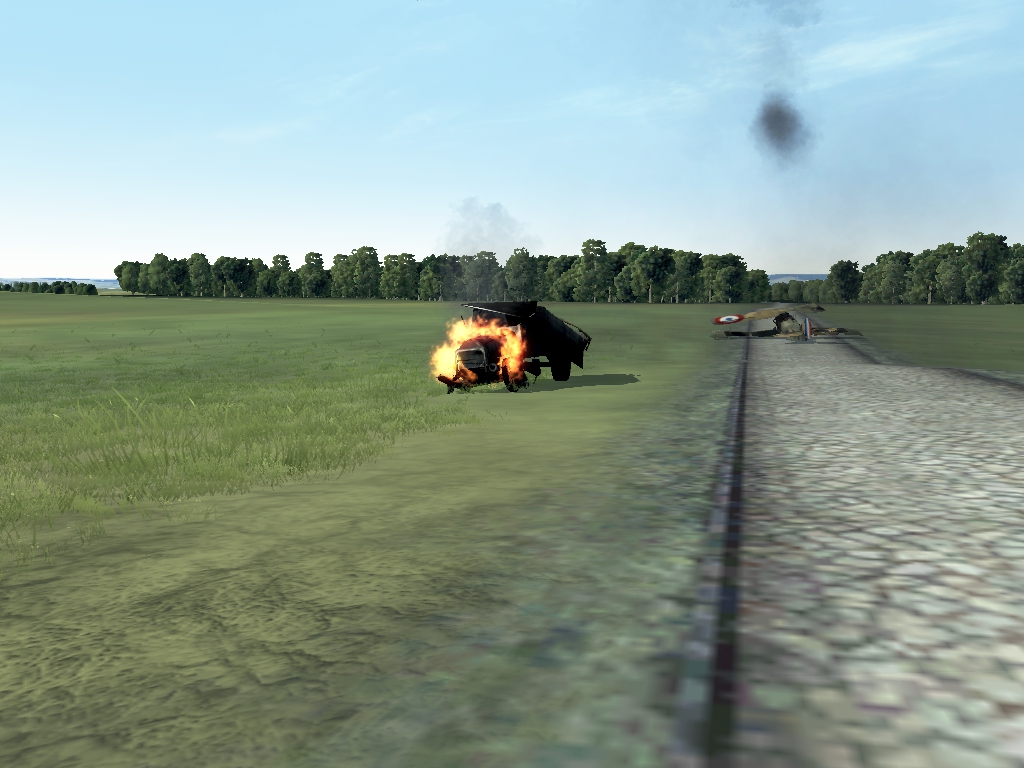 Target Destroyed! But it turns out I have difficulty recovering the plane if I'm ground-strafing from ground level.
Posted by John Goodrich at 8:34 PM No comments:

It's An Accurate Flight Simulator...

I can tell because I've crashed about five times in each of the training missions. I'm getting the hang of dealing with the radial precession of a rotary engine, so I've made a couple of really good take-offs. Far more often, I wheel madly around the runway, desperately overcompensating to the turns my crate is making. It's not pretty. 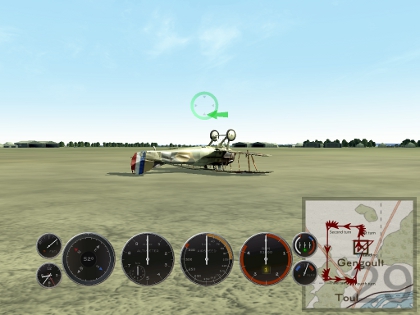 The difference between a flight sim and a flight game is that the sim gives you the plane, warts and all. With modern computer speed and detailed programming, the particular quirks of the aircraft (like shedding its wings in a steep dive) are now being accurately simulated. The flight sim is therefore much more difficult to master, but this also makes it more rewarding in the long run. But right now, I'm at the bottom of the learning curve... and that means a lot of crashing.
Posted by John Goodrich at 8:30 AM No comments:

Not one, but two deadlines looming. I won[t be blogging much for a little while.
Posted by John Goodrich at 7:25 AM 2 comments:

I've shared, or perhaps inflicted a number of my obsessions on this blog: Godzilla, Lovecraft, Ancient Egypt, necromancy, The Tomb of Horrors. These are the subjects that I return to again and again. I'm not sure why. I think everyone has these odd little things that they just like for reasons that are buried deep in their psyche.

If you've read my fiction, you'll notice that I have a thing for WWI flight. Open-cockpit flying, the time part of the danger of flight was that your plane might shed its wings. Biplane flight is beautiful. It doesn't isolate you from the fact that you're flying. I don't know where I picked up this particular twist in my psyche, but I've taken several rides in airplanes older than my parents, and loved each one. But that's expensive and inconvenient. When I want to get that feel of flight, I turn to WWI flight sims.

I'm lucky in my obsessions. They're pretty obscure. Whereas there will be several WWII or jet flight sims or games put out in a year, dedicated WWI flight sims tend to be few and far between. Because I obsess about this sort of stuff, I collect them. Old WWI flight sims, new WWI flight sims, the different editions of the same flight sim. I love cataloging them, writing about their differences, analyzing the way the genre has developed and changed.

I was, for example, ecstatic when, in 2005, Atari released their early arcade games on PC. At last, I could play the original Red Baron again! 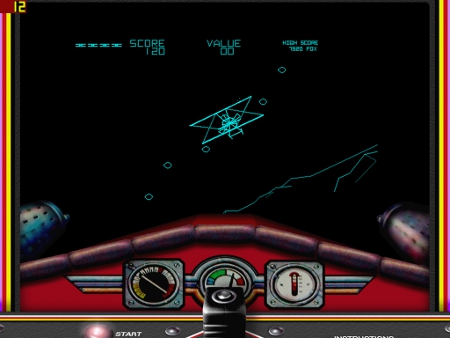 At the same time, I'm keeping up with the most recent WWI flight sims, such as 777 Studio's Rise of Flight, which is quite astonishing in its detail. 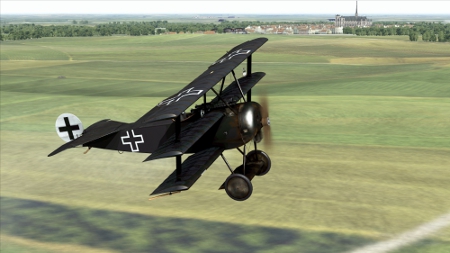 There have been a large number of these sims since 1981. I count about 70. Luckily, a lot of them are out of print or were unpopular, so for less than $20, I can acquire an older piece of software with what are often some very nice manuals. With DOSBOX, I can now play the majority of these. For example, I've acquired Cosmi's War Eagles, which is just about the oldest WWI game I can find for the PC. It came on a 5.25 inch diskette. Remember those? 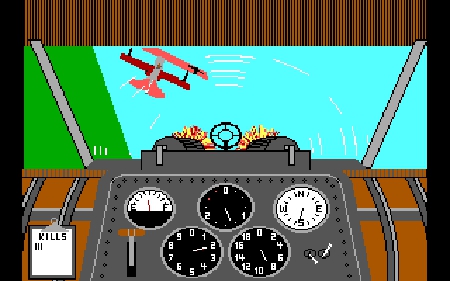 The internet, especially Ebay and Amazon, have been extremely helpful in discovering and locating these older games, especially the really weird and obscure titles like Manfred von Krashenbern’s Flying Circus. And it's really a chuckle to watch these bundles of polygons that the brain somehow translates into flying planes.

Everybody has their little quirks, and this is one of my perennials. Sometimes, I won't touch a flight sim for a year, but I've always come back to them. And I love them all, from the prmitive to the goofy (Red Baron Pizza included a free flight sim in some of their pizzas in 2004. It's hilarious!) to the unforgiving modern sim.
Posted by John Goodrich at 9:38 AM No comments: