Message Received by Battle Barge Glad of War, in service of the Rune Bearers chapter of the Adeptus Astartes;

Since my last missive, Splinter Fleet Mordiggian, once considered a small and worthy of little notice, has shown a cancerous growth, and many of the more frightening genus of Tyranid have spontaneously arisen within its ranks.

Thanks to Inquisitor Kryptmann’s gambit, this Splinter Fleet spends much of its time combating the Orks. Many clashes have been witness by out remote seers, and with the preponderance of the genestealer genus. While I do not favor either side, for both are xeno abominations which must be purged from the galaxy, it is frightening to report that many Orks have fallen to the genestealers claws, and that this causes me to worry that about wisdom of Kryptmann. If this splinter fleet unlocks the secrets of Ork fury or adds the Orks’ instinctive craftiness to the Tyranids already formidable combat arsenal, I fear for the existence of the Imperium, especially as the splinter fleet has begun the process of autologous diversification, as seen on the Anphelion base. A trygon has emerged where there was none before, as have tervigon specimens, which would account for the rapid increase in the number of termagants that the splinter fleet is able to bring to bear. 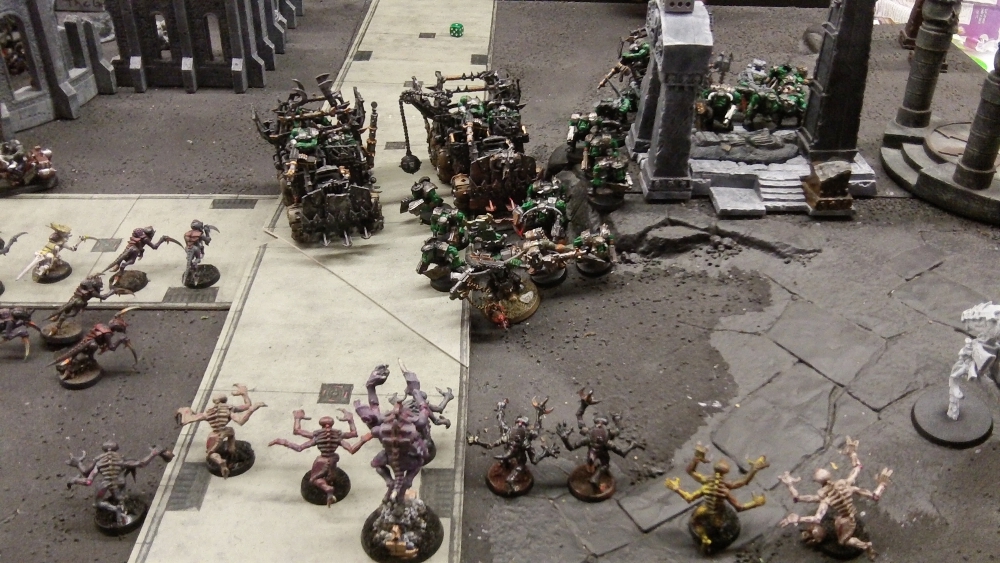 More disturbing it the emergence of Mordiggian’s first Hive Tyrant, seen here with a tyrant guard and zoanthrope just before it destroyed a large number of Ork nob bikers. The terrified astropath that viewed the emergence of the tyranid monstrosity died of fright after transmitting this picture. The terror and destruction that this horror brings with it cannot be underestimated. 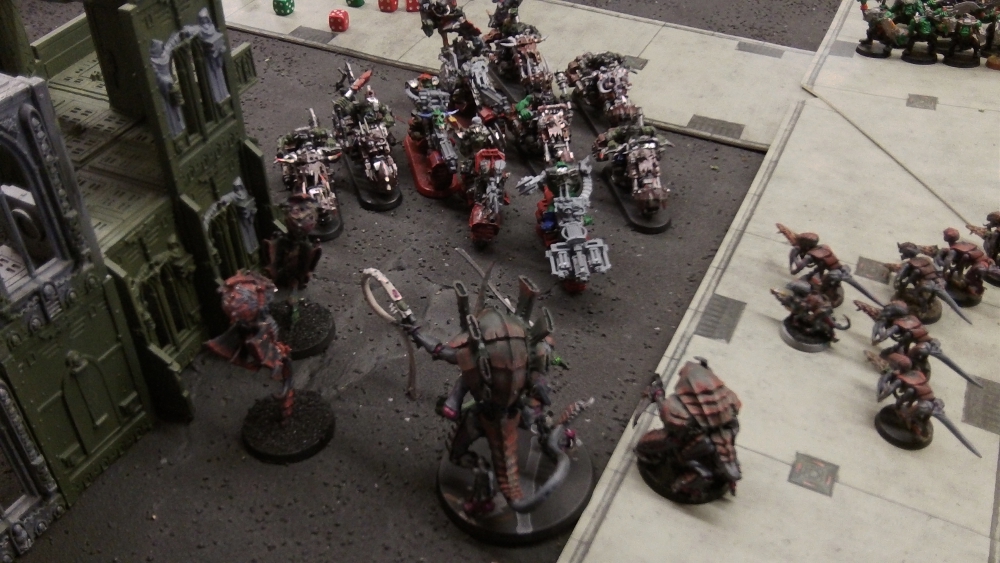 The greatest setback experienced by Mordiggian was an encounter with the Blood Angels, seen here as a brood of zoanthropes attempt to conceal themselves from the Blood Angel Thunderhawk under the strange and undoubtedly warp-tainted skies of skies of Stromsholt. Though defeated, the splinter fleet was not exterminated, and the menace has emerged again, like a disease or destructive weed, from another quarter. 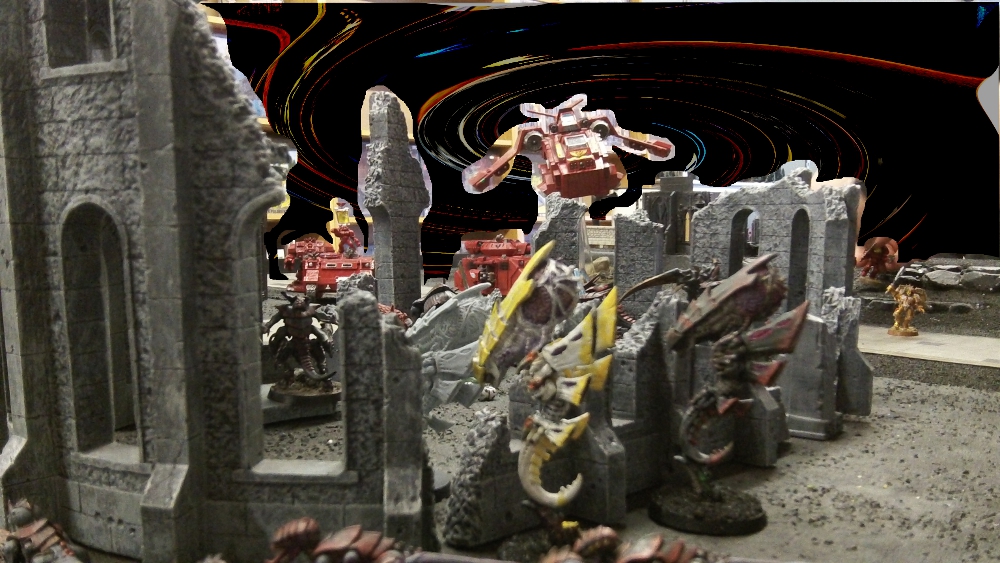 Most recently, the splinter fleet has been seen to use mycetic spores, living meteors which, once grounded, pour forth countless termagants, which in turn pour death into an unidentified Space Marine chapter seen here. 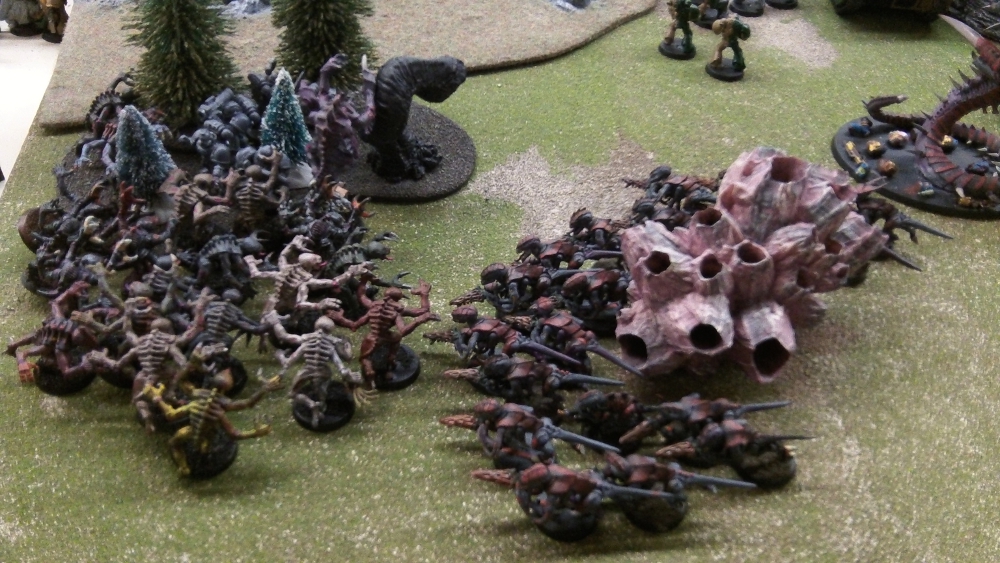 This hive grows at a frightening rate, and I have no wish to be present if it turns its attentions to Eorthscraef, or any of our sector. Once again I humbly beg that the Rune Bearers dispatch a contingent of their extraordinary warriors to exterminate this peril before the lives of more Imperial citizens are endangered, their property destroyed, and their usefulness to the Emperor crippled or eliminated altogether. We shall, of course, defer to whatever judgement your worthiness decrees.

May the Holy Emperor guide your hand in delivering us from this frightful menace,

Johann of Eorthscraef
Posted by John Goodrich at 7:47 AM No comments:

On The Need to Write Quickly (With Name-Dropping)

I've been solving one short story for about two and a half months. It's been a difficult struggle, but I finally put the first draft to bed last week. I have to write faster. Part of the reason I'm updating this blog more regularly (which is to say, regularly) is that I need to write every day, even on the days that I don't peck away at a story.

Because I have changed. I'm not the same person I was in February when I started this story. Allowing the process of the story to drag on so long means that the story will likely be weakened, thematically. I will no longer have the same passion for the plot and the themes that I did when it was fresh in my head. I have stared at it and been sick of it because I've been thinking and reading the same damn thing for the past two months.

Robert Asperin once said "I'm not a slow writer, and I'm not a fast writer. I'm a half-fast writer." And I have to avoid that. I'm not going to support myself with short stories, even if I write one a week. Because even at professional rates, that's (.05 x 5,000=$250 per story x 52 weeks=) $13,000 a year. Which is not liveable. But if I can learn to hammer out the prose with the short stories, I'll be able to sustain my attention for longer when I'm writing a novel. After my current story, "Tribute Band", I'm back to my novel. Which will be finished by NECON so I can ask James Moore (because hey! James Moore!) to read it, and then I'll move on to my next novel as I'm passing the current one around for publication.

I've set the first draft deadline for the latest short story at the 27th. I need to get faster about my stories, because I need to ace deadlines when I'm asked to write something. Being early, and even better, getting a reputation for being early, can be an enormous asset when editors are thinking about who to invite into their anthology.

Special Thanks to Brian Keene and Walter Jon Williams for some hard truths that made this post possible.
Posted by John Goodrich at 9:08 AM No comments:

What Do You See?

What do you see when you look at someone? The neat hair, the cared-for, well moisturized skin, a quick smile? Do you see their skin color? The shape of their teeth?

I look at people a lot. Make assumptions about them from their appearance, the way they speak, how they present themselves. See the contradicitons. Neat hair with dirty nails, well cared-for skin and black stumps of teeth. I find that like stars, most people fall into a main sequence. They fall on a broad political spectrum, as well as a broad social spectrum. But generally speaking, their appearance and speech reflect this. Other details will emerge, and sometimes it's even possible to guess of someone was an only child, what sort of relationship they had with their parents. It's not a difficult skill to acquire. Just be ready to ask someone some slightly over the line personal questions to test your assumptions.

The people who don't fall into that main sequence? They tend to be more interesting. They have changed in some way, come to a life-altering apiphany, or perhaps they were raised on different assumptions than the majority of Americans. These people are often interesting to talk to, because they have a different point of view. And these people are often fodder as a protagonist.

And this sort of sociopathic picking apart of people is what my latest story “The Neighbors Upstairs” is about. Is it possible to pick someone apart using just conversation? How much of ourselves do we reveal when we talk to strangers? How are people strange, and how can our own assumptions and our frame of mind interfere with the way we view someone else? 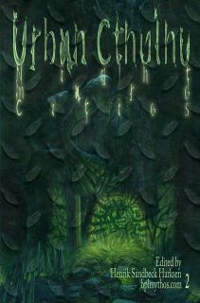 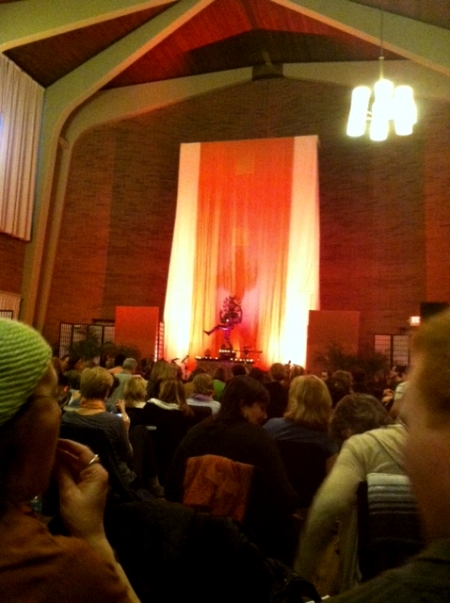 Last week, some friends and I went to a locak Yoga center top see Kirshna Das in concert. Not because I am a Hindu, or even because I have ever wanted to chant the Hare Krishna, but because kirtan involves common singing. I like singing. I am, however, aware that I'm only a small step up from those tuneless bastards that grab the microphone at Guitar Hero sessions, but that gets lost when there are a couple of hundred people singing. In the same way that a mass of votes is supposed to pull wisdom from the common people, common singing pulls a bearable tune out of people who are at best mediocre singers.

But communal singing is also powerfully human. Virtually every religion on Earth practices communal singing, because it appeals to us in a social level. When we sing together, we are all part of the tribe. Our differences disappear, because we are all singing the same thing, contributing parts to a whole.

It helps that Krishna Das sings from a different tradition than the one I grew up in, so I wasn't expecting lyrics that had emotional baggage, or even a language I understood. Krishna Das performs his own aspect on the kirtan, the Hindu chanting, in a call and response fashion, the names of god, and he mixes the traditional with more familiar Western tunes and styles. This makes it more accessible to the average American.

It was a popular event, so we waited in a hallway for about forty-five minutes, watching the people who were taking their yoga classes. And I began to write the scene in my head, and then started writing it as other writers. How would Brian Keene have evoked the scene? Nick Mamatas would have used the phrase "Cultural appropriation" at the very least, and probably a couple of times. Especially after Krishna Das played "Jesus on the Main Line."

But I wasn't seeking a religious experience. I wanted to sing and ohhhm with a bunch of people. And I have to say, I had a good time doing it.
Posted by John Goodrich at 8:24 AM No comments:

Where do the ideas come from? For me, the ideas tend to come when I'm in some sort of enforced not doing anytghing else period. Long car trips and the 20 minute walk to work, as well as showers, these are the times that I tend to be my most creative. Because I'm not distracted. I don't have access to all the distracting fun I have at home; playing games, reading something, watching something, Internet arguing, blogging. All of these have their place, but they're not what I want to be doing when I'm coming up with a plot, character, or twist.

So I often scribble notes down, so I can remember the ideas I had when it wasn't appropriate to sit down and write them up. As a result, my desk, and occasionally other flat surfaces, are covered with little pieces of paper that appears to have cuneiform writing on them. For example, these are the notes for my next story, provisionally titled "Tribute Band" written somewhere between Rutland and Randolph: 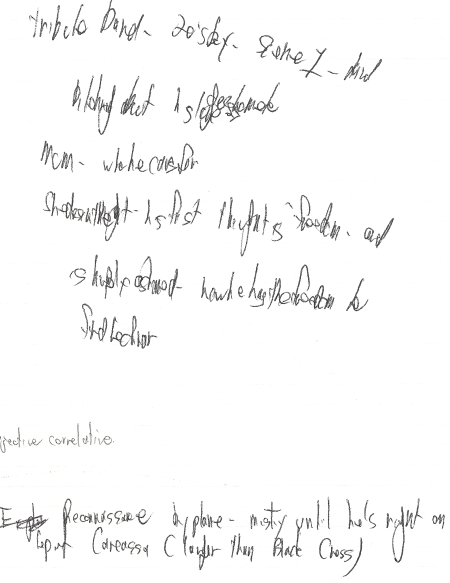 Which first of all says why I should never text and drive. But those scribbles will probably come out to about 1,500 words when expanded, and define the emotional heart of the story. So there it is, what my creativity looks like. A messy beginning, the 10% inspiration that leads to the 90% perspiration.
Posted by John Goodrich at 8:25 AM No comments: