So, I've been looking at publishing from a decidedly last decate point of view. Partially because the first research I did was, well, in the 90's. I've found my gurus, and the people I trust, and lacking much in the way of other expertise, I've followed them: get an agent, they'll get you a publisher, and off you go.

I'm finishing up my second solo book. And it's a good book. When I began writing, self-publishing was the way to go for those who had given up on the publishing game. Who couldn't navigate the game well enough to That's changing. Read Glen Krisch's guest blog on Brian Keene dot com. I'll wait.

Now, Glen is exceptional in that he has been an editor, so he's clearly ahead of most people in the writing game. He's got sterling prose, just read his blog entry. It's an interesting read, moves along quickly, and unlike this blog, has no typos.

The thought of freedom is seductive. While I doubt sales of my books are going to keep me afloat without another job, it mught be a good start. And I could continue the series I have wanted to much to write. But there's stuff to consieder: having an editor look at the work, getting a cover, making sure it is as polished as it can possibly be, and then promoting it.

How the hell do you promote an e-book? Well, that's something I'm going to have to research.

I'm really scared. If I don't put out the best book I can, I might not find my readership, and I desperately want readers. I think I'm saying a thing or two that people want to hear, even need to hear. And if I self-publish, it's all going to be on my head to get it the hell done.

On the other hand, I might just ring the cherries.

I'm going to look at traditional, small publishers who have decent track record before I really investigate self-pub route. There are still a lot of rip-offs out there. But I think my current novel is strong enough that it will catch someone's attention. But now I have a backup plan. And strangely, that makes me feel more secure.
Posted by John Goodrich at 9:54 AM No comments:

My Complex Relationship With Reviews...

The truth is that my relationship with reviews is a lot more complex than that. We always read the reviews. The writer who does not either has too many reviews to read, or they have antifreeze for blood. Either way, they are people to be feared and respected.

Everyone gets bad reviews. My best negative review is from Amazon, concerning "Captains of Industry" from Cthulhu's Dark Cults which says "'Captains of Industry' left me feeling like a few pages were missing. Lots of union rhetoric (all good), and a few 'who are these guys and what are they doing' issues, but nothing chilling. I was confused as to why this had been written, as it seemed to have no overall point or connection to the cthulhu concept. Yes, union busters and early industrialists were bad news at times, but this left me confused." And a part of me says "He didn't get it." Another part says "I should have made the connection to the Mythos more clear. And maybe there was a bit too much Socialist rhetoric for a horror story." But the story is out, and there's no way to revise it now.

On the other hand, Brian Keene praised the anthology and the story on his blog. I'll take Keene's praise over just about anyone else's. And certainly over most peoples' criticism. I've met the man, and he is a straight-talker. When he reviews his reading material, he is not thinking about whether I'm going to like (or, in this case, be over the moon) his review. He's thinking about what he read from the standpoint of someone who has read a HUGE amount. And writes a lot.

So I have two very different opinions of the same story. I can either tie myself up in knots by trying to reconcile the two, or I can think to myself "Hey, I pleased a reader whose opinion I respect, so I must be doing something right." And that's how I tend to look at positive reviews; I made a connection with someone who thought enough of the story to tell other people.

Part of the reason I bring this up is because I just received an enormously positive review of "Not an Ulcer" in the NEHW's Epitaphs Specifically, the reviewer likes my story more than anyone else's, and says so.

Now, I've read Epitaphs. It contains stories by Christopher Golden, Rick Hautula, and Peter Dunbar, all of whom are heavy hitters in the horror community. They're excellent, polished, professional writers, and their stories are, in every measurable way, better than mine.

I'm not just saying that because I respect them, or I've met them. I'm saying it because it's as true as a summer day is long. Their stories were better, and it would take someone like Stephen Hawking or Umberto Eco to sway my opinion. The chance I'm ever going to say to anyone "Hey, someone thought my story was better than Chris Golden's" is ZERO. Because his story was better than mine.

At the same time, the story clearly connected with the reader. It seems like I adequately conveyed my concept. And I'm glad they liked it.
Posted by John Goodrich at 10:57 AM No comments:

Ra Was a Jerk!

Because I'm that nerd, I like to read translations of ancient manuscripts. If I was a real wonk, I'd be learning languages to get the real flavor of the text, but that's not going to happen. Except maybe with Old English.

Anyway, I've been reading the rather delightful Raymond Faulkner translation of the Ancient Egyptian Book of the Dead (or the Book of Coming Forth By Day, if you're more of an Egyptian nerd that I am). It's a pleasant translation, with color pictures of various papyrii makes it a pleasant read. 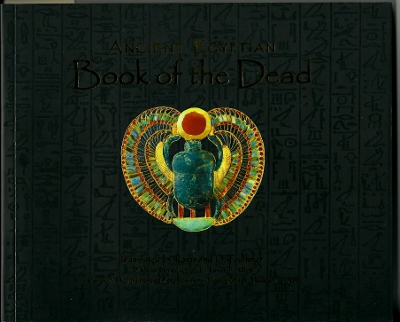 It's pretty common knowledge that the Egyptian Gods were pretty pleasant to the Egyptians. They had regular seasons, and the Nile's live-giving floods were mostly gentle. Unlike the Mesopotamians, whose gods were capricious at best, partially because the flooding of the Tigris and the Euphrates were highly variable, and could turn deadly without warning.

I'm beginning to question the Egyptian Gods' overall benevolence, as I read the Book of the Dead. It's is a collection of a hundred and eighty-nine spells intended to give the recipient a pass to the pleasant afterlife, as opposed to the bad one. There's a spell to ward off hostile crocodiles, one to transform the recipient into a heron should he so wish, and spells to demonstrate to the gods that the recipient is justified, and so should be able to go to the Field of Reeds.

However, there's a recurring theme that's more than a little disturbing. Spell 102, "For Going Aboard the Bark of Ra":
"O you who are great in your bark, bring me to your bark, so that I may take charge of your navigating in the duty which is alloted to one who is among the Unwearying Stars."

Sounds good so far, right? The Justified individual wants to get to be on Ra's boat, and help with the navigation. Which, hey, at least he's not asking to laze around and be a nuisance when everyone else is fighting off various demons of darkness. But there's a kicker in the very next line:

WOAH! Man, Ra is a jerk. Luxury all the way, taking control of the Bark that is the Sun, but if you don't say this spell, he's going to feed you shit for the rest of eternity? What kind of food service is there on that thing, anyway? It sounds suspiciously like one of those contracts written where anything not specified is supplied at absolute minimum. "Haw Haw!" laughs the God of the Sun. "You didn't say anything about provisions, so here's a big plate of poo!"

What a jerk.
Posted by John Goodrich at 9:35 AM No comments:

You know, there's very little that brings up my mood better than a good review. That ininimitable web resource, Horror World, has just published a very positive review of Nightmare Cities: Urban Cthulhu, and that's a wonderful thing. Congratulations to everyone who plkaced in this anthology, and definite thanks to Brian Sammons for telling everyone how much he liked it.

I've also met my writing goal for this morning, so I think it may be time for a trip to the comic book store.
Posted by John Goodrich at 10:47 AM No comments: