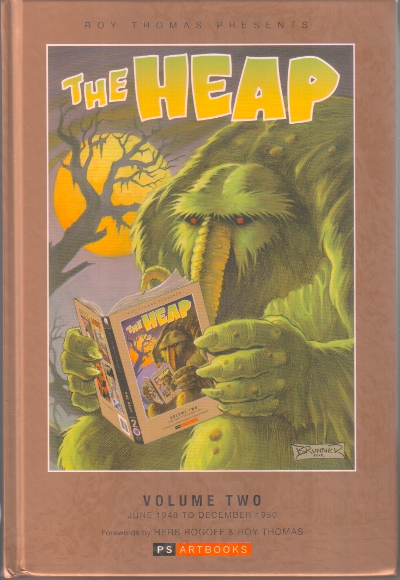 Welcome back to my Muck Monsters series. This time, I'll be looking at the second volume of PS Publishing's wonderful collection of the Heap.

The second volume of Roy Thomas's Heap is a time of transition. It begins as a crime comic, with dangerous broads and guns and surprisingly frequent murder. But the stories are starting to move into 'weird menace territory. Gangsters are slowly being replaced by serial murderers, murderous molls. In the second story in the book, from Airboy Comics V5#6, July 1948, the ugly and deranged Henri kills people because they are ugly, uglier than he is. Henri attempt to kill the Heap with his bare hands, with the inevitable results. The Heap itself remains the only unnatural figure in these tales, but the story structure, in which the heap is the catalyst for justice rather than the protagonist, has been well established. Of particular note are two stories with deceitful women, who shoot people who get in their way and get their comeuppance through the actions of the Heap. And, because this is still Airboy Comics, the occasional touch on von Emmelman's flying past. There's a club that reveres him, a man who stole his medals, and his bosom friend (who we have never seen before). 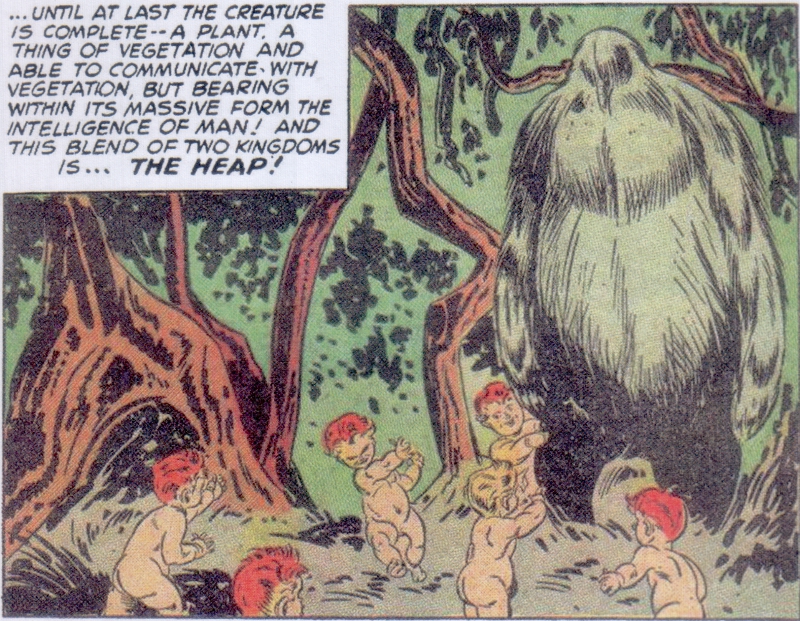 The supernatural begins to creep in with the sixth story in this volume, called "The Iron Duke of Galicia" (November 1948). In it, we are introduced to the ghost babies of Wasau, children murdered during the Iron Duke's merciless rampage. Why they have chosen von Emmelmann, and what sort of power they have to create something both human and plant, we really aren't privy to. We never see the ghost babies again, but Mother Nature takes their place as the Heap's sponsor, a Charlie to his Angels.

Mother Nature is very reminiscent of Ceres, who appeared for three stories in the first volume. Her hair is dark where Ceres was redheaded. Like Ceres, Nature uses the Heap very specifically against men who destroy and make war. This more generalized conflict and magical agency seemed to work better, since it stuck around longer. Rather than opposing Ares as the godly personification of war, Nature directs the Heap against cruelty and destruction. Nature also has her own powers. In the first story, she calls on the trees to grow their roots and break down a castle. This seems like the first true precursor to Alan Moore's Swamp Thing, linking the Heap to a larger force of nature, and giving it power of the local plants. Later, the Heap itself commands the roots and grasses, without the intervention of Mother Nature. Moore, as is his wont, expands on this, taking it to a fantastic but logical end. But the exploration of that is for a future blog post.

A bit later, we come across a pair of stories that are different, but not quite contradictory accounts of why von Emmelmann became the Heap. In the first, it turns out that the Belled Goose grants wishes, and in his last moments, von Emmelmann wishes to live forever. After Emmelmann's crash, the goose flies the cell of Captain Bocke, who is being held for jamming von Emmelmann's guns. He also wishes to live forever. Facing down a firing squad, he discovers that he can no longer be killed. The story ends on a melancholy note, with the two immortals, Bocke and Emmelmann, wandering away from each other attempting to capture the elusive belled goose. A year later, we revisit Bocke and von Emmelmann in a connected three-part story. While alive, von Emmelmann was working on the secret of Egyptian alchemy. Bocke drinks von Emmalmann's formula, and it is this that renders him unkillable. However, the alchemical immortality has a loophole: Bocke can be killed if he returns to the scene of his crimes. The Heap pursued the immportal Bocke across the landscape, and eventually he falls into a crocodile swamp. It Bocke truly immortal? Can he come back from being eaten? The story leaves this question unanswered, Bocke ready for his role as a recurring villain. Which didn't happen. 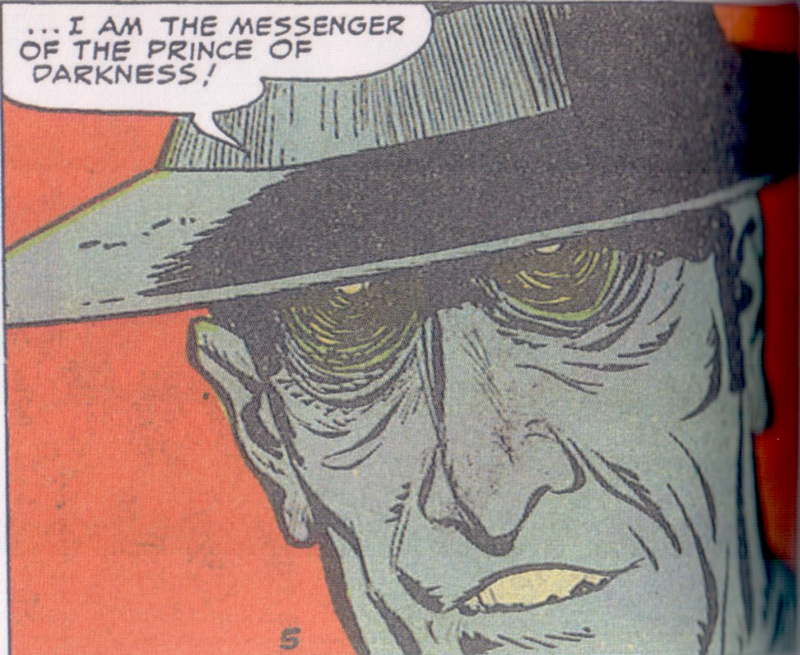 The Heap runs across all kinds of strange entities, including the messenger of the Prince of Darkness. The stories become more and more weird. But whatever he faces, whether it's a messenger from the Prince of Darkness, the ghost of a ship, a mummy, a werewolf, gigantic white seal, or even inbred degenerate Roman soldiers, the Heap triumphs over evil or brutality with a few swipes of its paws, or its inhuman strength and the occasional vine. The stories are pretty formula, but it's a good formula. There's enough unexpected weirdness happening that it carries the story. The Heapo also has an advantage in tghat it does not speak, and it only rarely has thought balloons. So its motivations are not laid out for us. It only communicates through its actions, a trait shared with Man-Thing as well as the first incarnation of Swamp Thing. In many ways, this is the character's saving grace. In a medium that is very over-written, the lack of direct information about the Heap and its motivations is welcome. 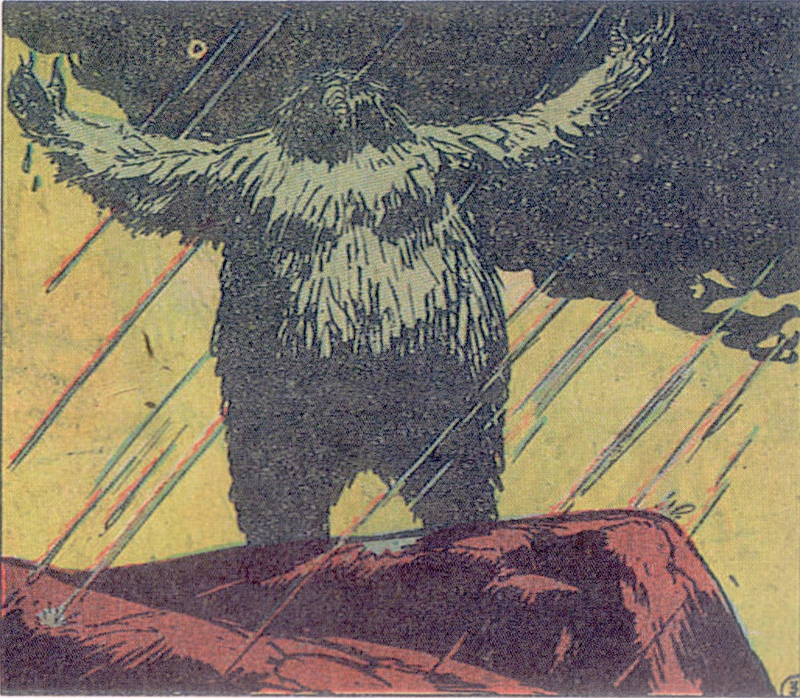 The Heap also exhibits some classic images that are later used in some comics. In the Ernest Schroeder's first issue, there is a panel of the Heap, arms raised, framed slightly from below. This may have influenced Steve Bissette's classic splash page which closed issue 24 of Saga of the Swamp Thing, forty years later. Of course, Bissette could work in a lot more detail, with more room and a better printing process at his disposal. 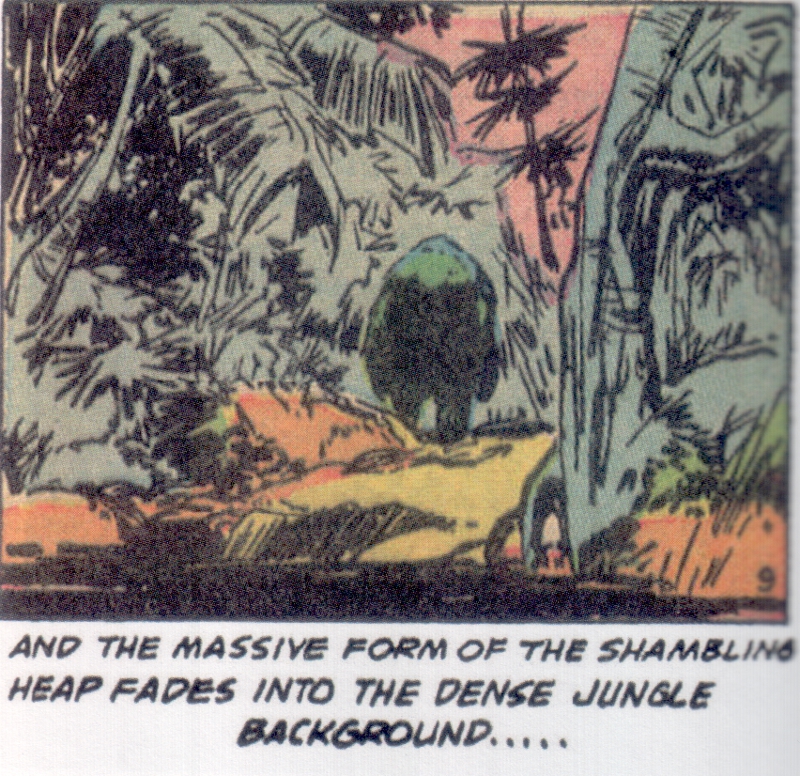 Further, there is an image at the end of "The Book of the Dead" (August 1950) that bears a pronounced similarity to the iconic last frame of the original Swamp Thing story (House of Secrets #92) as the mute swamp creature that was once Alec Olsen returns to the swamp.

The second volume of The Heap really finds the book hitting on all cylinders. The variety of strange situations is very good, lending the stories a sense of unpredictability. The Heap had found its niche, and it remained a regular fixture in Airboy Comics until the title was shut down by Hillman Publication's transition out of comics. It's an excellent and informative prototype for the many swamp creatures we know and love today. But even read not as history but for themselves, the stories are pretty good. Although sometimes overwritten, with characters making speeches designed to hammer home what's going on, the plots move at a good clip. At eight or nine pages, there's little room for filler. There's a reason the Heap has been resurrected and imitated so many times.
Posted by John Goodrich at 5:45 PM No comments:

I Understand It's Healthy To Express Gratitude

Yesterday, Brian Keene wrote a touching blog post called "A Little Warmth Against the Winter Chill." In it, he writes about the pleasure of spending time with younger writers whose hearts had not yet hardened, whose enthusiasm blazes bright warms the people near them. Making art day in and out is tiring, and it's never easy when people repeatedly try to screw you.

I'll never be able to be objective about Brian Keene. He has, more than anyone else in this business, been a mentor to me. When I was starting out, he had a website called World Domination 101. It laid out the principles that any writer needs to follow in order to get anywhere. Write as much as you can. And value your writing. As someone who did not initially understand the value of his writing, this was excellent advice. And I pass it on to anyone who needs it. Do not accept bad terms for what you have worked so hard to create. Value yourself, value your work. He was the first professional to say that he thought I could make it to being a full-time writer. Which I haven't yet, but it's something I'm striving for. For someone who makes art, the good word of someone who makes good, successful art is huge.

Did I mention that his book Dark Hollow is one of the best books I've ever read? And now I have spent time with the man who wrote it, being interviewed for his podcast. I try to express my gratitude often. I have watched too many people go away, or have near-misses. Thank you for the inspiration, and encouragement, Brian. You have made a tremendous difference in my writing, and my career.

And yes, I will be continuing the Heap series.
Posted by John Goodrich at 6:03 PM No comments: