The end of another NECON

Today was the last day of NECON. I'm tired, because I never want to sleep at NECON. If I don't, however, I get massive headaches, and I'm absolutely useless.

It's a wonderful con, and it always is. Foremost in my mind is a conversation with several pros, which ranged from an unusual recipe for sausages to our proposed charity anthology "Naked Came the Hairy Stranger." I have never learned so much while laughing so hard.

The panels were useful as usual, and I exercised a lot of self-restraint by not buying a lot of books (I still haven't read all the ones from last year). I refreshed friendships, met many delightful new people, and generally steeped in the presence of many talented and creative individuals. There are many conventions, but there's only one NECON.

For the first time, I spread my books on the table and shilled. I'm not as bad at it as I was afraid that I was. And congratulations to Kim Paffenroth. He knows why, and I can't tell

Oh, and Nick Kaufmann? I see that you still blame me for the rubber ball incident of two years ago. This has not gone unnoticed.

Mood: Not Yet Awake

Let's see: Last week was a good week, but the one before that was not awfully great.

Some good things about last week: Some back and forth with an editor about a story. My ever-vigilant spam filter was catching him, so I didn't know he's actually responded to me in the middle of June. This problem has now been taken care of.

But you don't come to my blog to read this stuff. You want to know what happened when Doc Paffenroth and I went to the opening of the Hudson Valley Horrors' derby season on May 31st.

I had a good time. I haven't been to a lot of the usual American experiences. I can count the number of live converts I've been to on one hand, and I've never seen any sort of stadium show. And it's been a long time since I've been to a professional sports event. My impression of these things is that they are giant, well-oiled machines for the purpose to extracting money from the customer. 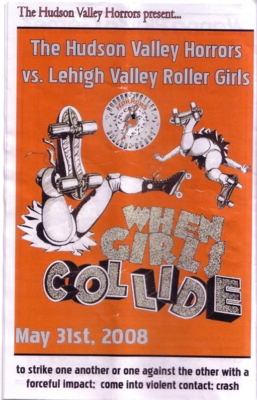 Roller Derby is a bit more punk rock than that. There aren't many perks (although if we'd known the more expensive tickets came with swag bags, we would have gotten them!) or spin-offs or big score boards. It's all spit and baling wire, duct tape and dirt. There's not much glossy about Roller Derby, and there are no TV cameras on it, and that non-slick feeling made it feel more grounded.

Yes, there are rules. The women circle the track, and when a jam is called, the smallest, fastest member of each team (the jammer) tries to lap the other team. She gets points for every opponent she laps. The number is not particularly clear to the novice at the end of the jam, but I expect that would change as the audience member watches more derbies.

To stop her from lapping, the other girls have a limited number of things that can do to stop her. They can't really go to town on their opponents; body-slamming and shoving them, for example, are illegal. Hip-checks are not. However, they can steal momentum by grabbing someone by the hips and pulling, and can shove a teammate into someone. Yes, this happened fairly frequently.

There's is a strategy. The really good jammers (Invader Zoom, Nuf Ced) didn't smash headlong into the other team, but wait for the right opportunity to get by them all, generally on an inside turn when they're all preoccupied with something else, like a five-girl pile-up after a lead skater went down.

All the girls have an assumed name. I don't believe this is because their "lives would be in danger" like los luchadores, but because it gives them a little extra theater. The creativity is a chuckle. Who wouldn't root for Slam I Am, the Killustrator, Lolita LeBruise, Alice Rumbledore, Invader Zoom, or my personal favorite, Minerva Steel?

The crowd was into it. I figure got between two and three hundred people there to watch an hour of derby, and the energy was good. I had enjoyed myself.

Now I'm trying to think of a way to entice Kelly Laymon to the sport. It seems like a perfect match for her.
Posted by John Goodrich at 6:34 AM No comments: