HP Lovecraft and the Non-Euclidian Plot

I like a Cthulhu Mythos pastiche as much as anyone. Probably more, I've got shelves full of Chaosium anthologies, as well as four volumes of Japanese stories in honor of Lovecraft, as well as various small press books of stories in imitation of Lovecraft. Hell, I've even got a couple books of August Derleth's imitations of Lovecraft.

I do have a crap limit. Lovecraft shows up in strange and unexpected places... including children's television. The animated superhero show Justice League broadcast a two-parter "The Terror Beyond" on November 15, 2003. I Netflicked the disk, and watched it.

The plot revolves around Dr. Fate and Aquaman joining forces with Solomon Grundy in order to seal a breach between out dimension and that of Icthultu, a noxious horror that has a mysterious link to Hawkwoman's homeworld of Thanageria. There's some fighting, because the Justice League aren't just going to ask Fate and Aquaman what they're doing. Once that's cleared up, they take a trip (in the second half-hour) to Icthultu's dimension to kick his ass. 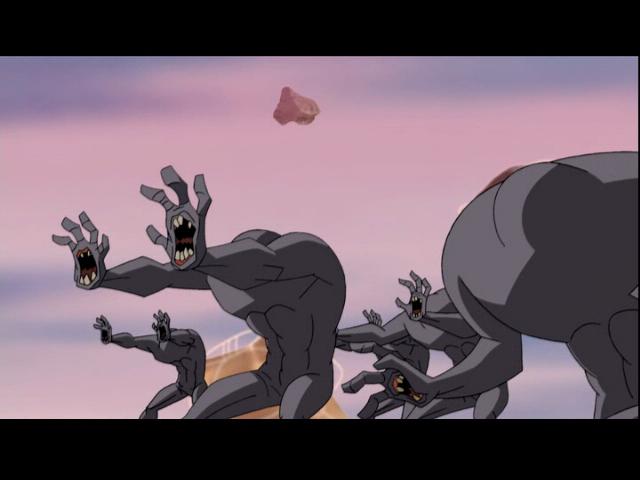 Now I'm going to start with the pictures. Some of Icthultu's defenders are gray, headless creatures with screaming mouths in their hands. Ramsey Campbell, are you paying attention?

With the gray IP violations defeated, the team separates, Fate, Grundy and Hawkgirl going to face Icthultu. We are treated to a good reveal 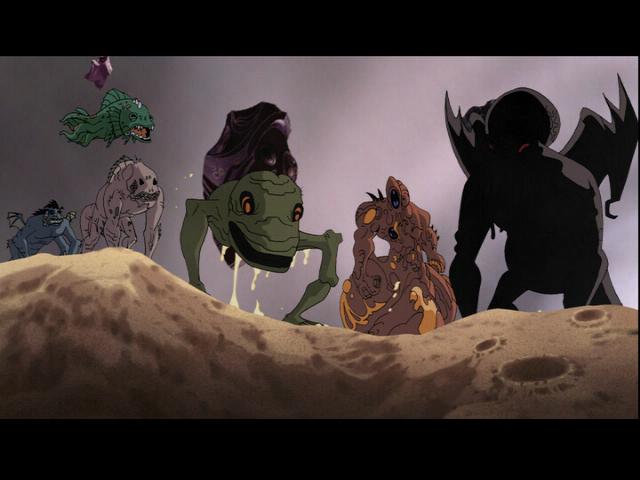 of the tentacled face of Icthultu glowering down on our heroes. Atheist Hawkgirl tells us that her Thanagarian people used to worship Icthultu, which gave them philosophy and agriculture in exchange for their souls. But the price was too high, and they stopped believing. They beat up some star-spawn (look at the right hand of the picture, that's practically Cthulhu in silhouette) 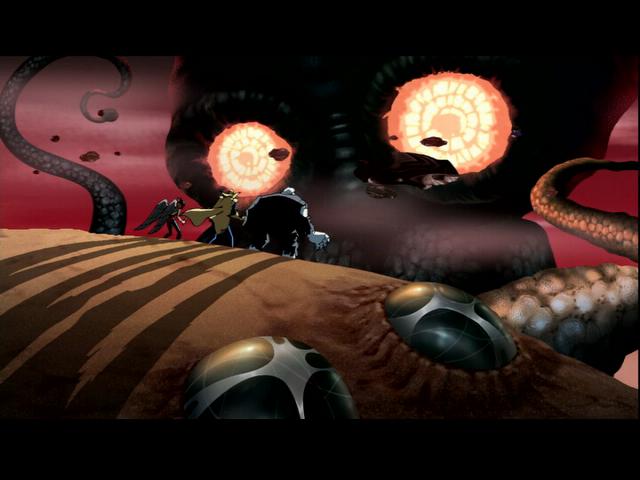 , and get right up to in Icthultu's grill. 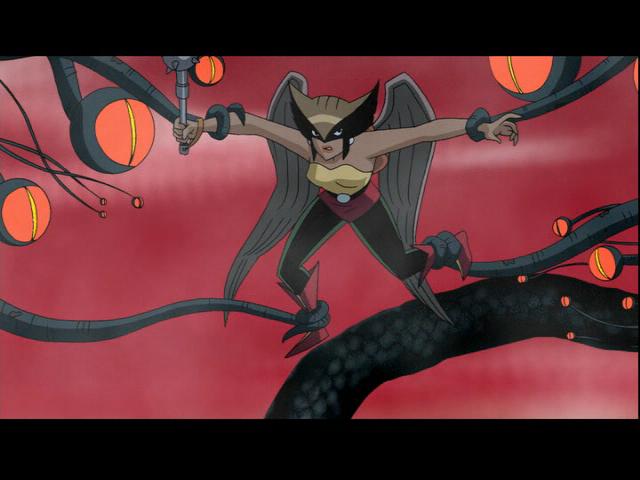 She's held spread-eagle (haw haw!) before the burning eyes of Icthultu, and banter is exchanged. 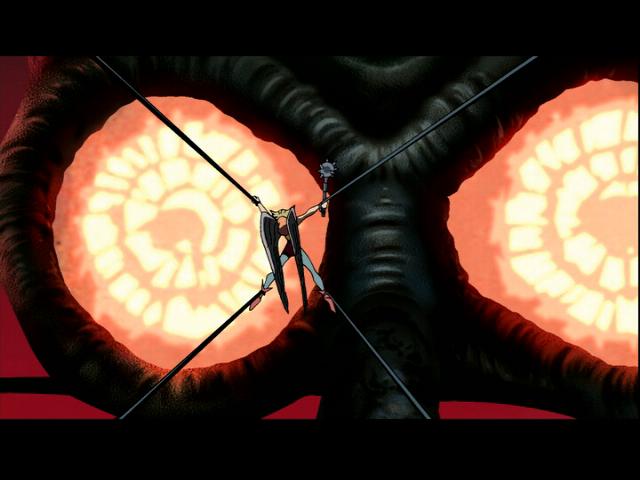 As the great Old One is distracted, Solomon Grundy gets into its head, and runs down icky corridors fighting off weird alien antibodies. I think he's in Icthultu's brain, the landscape looks like the neurons from the episode of Futurama when Fry does the same thing. But it turns out that there's something living inside Icthultu's brain... a giant monster! 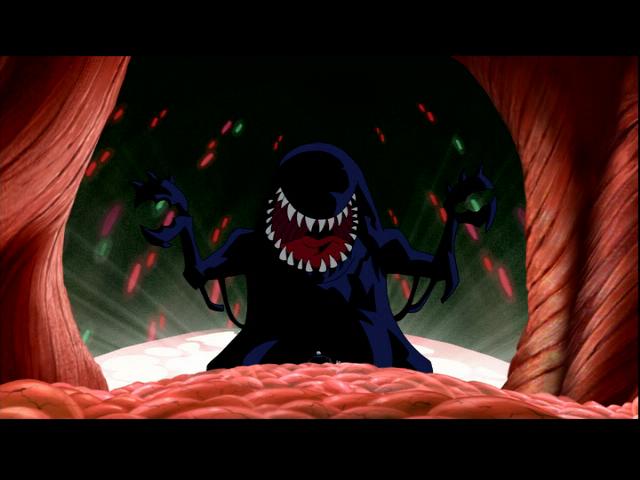 Fortunately, Icthultu (as voiced by Rob Zombie) is a enormous wimp. Grundy snaps off its claw, stabs it a few times, and that does the trick. 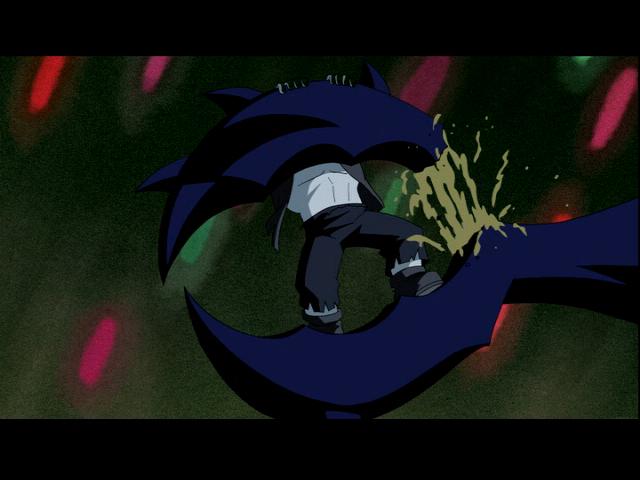 He probably stabs two feet of claw into a creature that's taller than a three-story building. But that seems to do it for Icthultu, and down it goes.

Grundy having done the mighty deed, is dying, and Hawkgirl comforts him. When Grundy asks if he is going to meet his soul, Hawkgirl chokes back the reply that she doesn't believe in them. THEN WHAT WAS THE BIG PRICE ICTHULTU EXTRACTED FROM YOUR PEOPLE, LADY? She believed in her ancestors' souls enough to build up a big mad-on at Icthultu for stealing them. 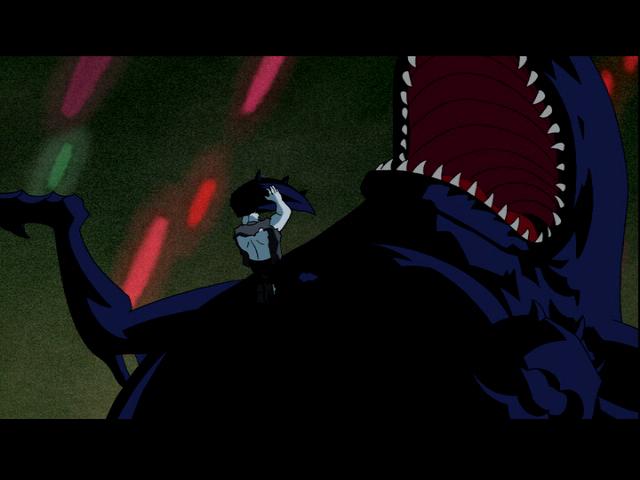 The non-Euclidian arc of this story, serving mainly to give us fights (some do feature some pretty smooth moves), drives me nuts. Superman and Wonder Woman are too hasty to ask Dr. Fate and Aquaman for explanations, and barrel right into a ritual that's keeping the Icthultu out of our dimension. But if they'd asked, the episode would have been over in fifteen minutes. Hawkgirl's comforting of Solomon is touching, but the moment is ruined because she's reversed her stance on souls in the last ten minutes.

Not all Lovecraft references are interesting, and not all are worth dissecting.
Posted by John Goodrich at 5:52 PM 3 comments:

Labels: The Glass Babysitter, Unspeakable but not Unpronounceable

I like to tell stories. This comes through even when I paint the models of Splinter Fleet Mordiggian. A picture is worth a thousand words, so here's some flash fiction about an Angry Marine and a Carnifex. 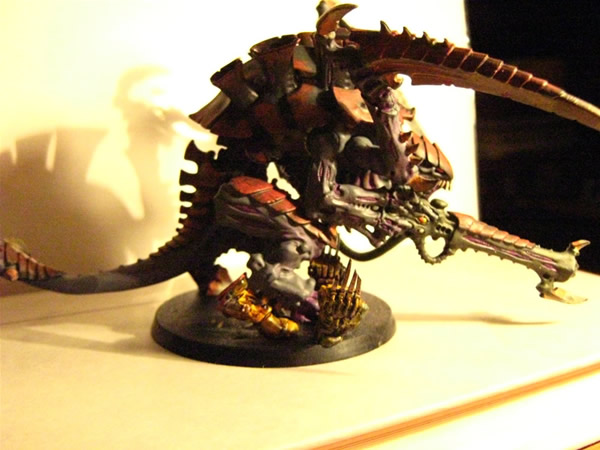 Posted by John Goodrich at 8:08 AM No comments:

Well, somebody blew up about fan fiction, and SF being a fairly small community, there's been a bit of discussion about it.

And it's been interesting to hear various people weigh in on the discussion. Predictable, I find the most interesting and cogent thoughts to be from writers of my generation, and who I've met.

Charlie Stross has a very well thought-out post on his attitude toward fan fiction using his characters or settings.

Nick Manatas presents a very interesting case of what copyright is and what it is not, using the rather complex case of HP Lovecraft as an example.

I've had this bee in my bonnet that someday, I would put together an anthology of really stunning stories, the best short stories I've ever read. I should have written it down then, because I don't remember half that list:

"The Hedge Knight" by George R. R. Martin
"The Great Lover" by Dan Simmons (yes, these two are novellas. It's my anthology)
"Jigsaw" by Stephen Bissette
"The Statement of Randolph Cater" HP Lovecraft
"The Cleft" by Gahan Wilson
"Monster" by Jack Ketchum

I'm forgetting a number of others.

However, there's a new story to add to it. I've been enjoying the Silver John stories of Manly Wade Wellman, thanks to Paizo Publishing's collection Who Fears the Devil. Wellman writes very well, and his stories of rural Appalachian folk are appealing in their evocation of this slice of Americana.

And there's a story that stands over the rest, as there usually is. "On the Hills and Everywhere" is simply told, and powerful for all that. It's officially going on the "How it's Done" list.
Posted by John Goodrich at 8:38 AM No comments: