Last month, I wrote about fear.  Fear of embarrassing oneself is often a hitch factor in creativity.  "What if this idea is no good?"  "What if people laugh at this idea?" are pretty common ones, and that sort of fear can be paralyzing.


But it's also exceedingly common.  It takes a long time to overcome that fear of failure, that fear of not being good enough.  Many people, and I'll add that many successful people retain that crippling fear that what they make is not fit for public consumption, and that makes them hesitate.


Which is not to say that creation is easy, or that everything that we make is fit for public consumption.  Nickolaus Pacione has taught me that, if nothing else.  But I'll never get anywhere if I don't start.  I'll never develop good ideas if I don't work through the bad ones, and have enough of each to recognize a bad one when it presents itself.  More importantly, if I hadn't cycled through a bunch of ideas, I'll never get comfortable with the concept that ideas are easy to come by.  Ideas are cheap.  Good ideas are plentiful.  Being willing to discard mediocre ideas means that I spend less time wrangling them. Because experience has shown me that if I wait five minutes, a better idea will come up.


Is also seems that, after five years, I'm going to hit 20,000 views of this blog.  I'm aware that the majority are Google search hits, and that I have yet to break a thousand hits in a single month.  But thank you to everyone who has read this strange personal/writing blog.
Posted by John Goodrich at 10:12 AM No comments:

Song of the Vikings

For a good time?  Go to an author's reading.  The Northshire Bookstore recently had an author signing for Nancy Marie Brown who has just released Song of the Vikings a book about the very interesting historian/skald of Iceland, Snorri Sturluson.
I learned a lot, just in an hour.  I knew, for example, that my 'escapist' reading eas looked down on when I was in college, that Tolkien had only a grudging respect in academia in the early 90's because he had written part of the Oxford English Dictionary, and because his books had sold so well.  How much more frustrating it must have been earlier, when he didn't have the cache of being so popular.  He was only an Oxford Dean, back then.


I love my Tolkien.  I love my Icelandic saga.  While they are not the same, they go hand-in-hand with a certain number of sensibilities.  And those have been passed onto a few generations of writers.  And I consier that a good thing. But it's always interesting to understand the origins of something I enjoy, as well as it's influences.  It's why I'm totally hooked on movie commentaries and extras.  What was the process that lead to the creation of something like the Lord of the Rings or Pan's Labyrinth?

Snorri Sturluson was a poet and powerful landowner in 13th Century Iceland.  He wrote many of the stories we clasically associate with Norse mythology, and laid the foundations for the early modern view of heroism. But Snorri's story also has unexpected moments of connection to the work of Tolkien.  For example, the day of his death.  September the 22nd.  Which is, for the non-Tolkein fanatics out there, Bilbo and Frodo's shared birthday.  Hm.

Nancy Marie Brown is a good speaker, interesting and informative.  She really knew how to hook me as a listener in.  She was pleasant to speak with and clealy knew her stuff.  Who wouldn't want a book or two signed by her? 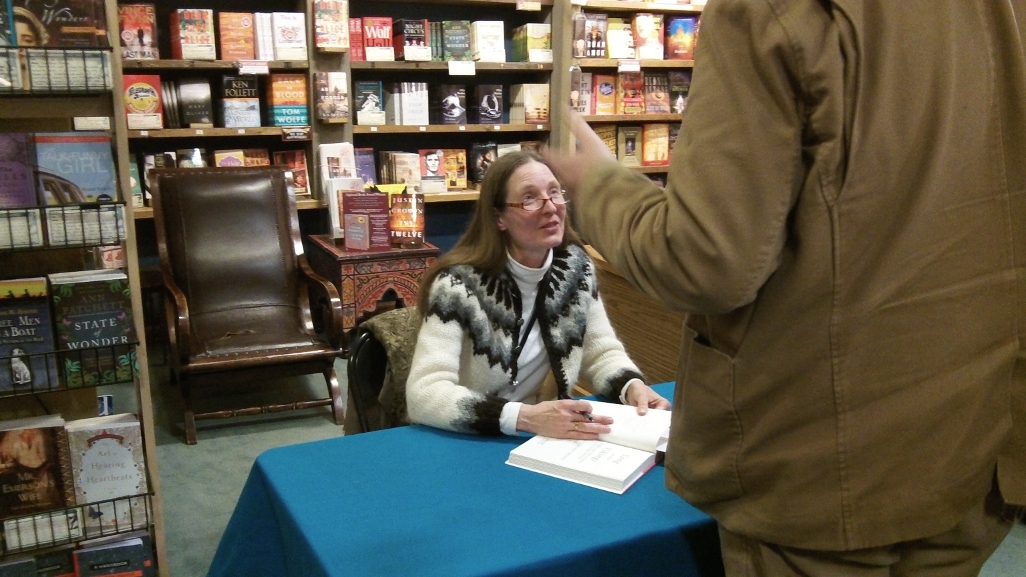 According to her blog, what prompted her to start writing this book was reading Neil Gaiman's American Gods.  Neil Gaiman, if you aren't a long-time reader, is, in my opinion, the second-most dropped name in English.  I can't wait to dive into Song of the Vikings.
Posted by John Goodrich at 2:17 PM No comments: