Gamera Is Completely Outclassed: Gamera 2: Attack of The Legion

A pattern emerges during the Heisei Godzilla series, and continues on to the Millennium series. When Godzilla has steam, few other kaiju films make an appearance. When Godzilla is not being produced, other films begin to show themselves. In 1995, two Kaiju films were made: Godzilla vs Destoroyah and Gamera, Guardian of the Universe. Gamera was the first non-Godzilla kaiju film since 1985's Pulgasari. The year following, 1996, had no Godzilla, and three kaiju films were released. The best is Gamera 2: Attack of the Legion.

Attack of the Legion has an advantage over the previous Gamera film in that it doesn't need to introduce us to the new Gamera. So it goes straight to introducing us to the villain, the Legion. Like some of the best bad kaiju, it arrives in, or possibly as, a meteor. With a little nod to Godzilla vs Destoroyah, and even as far back as Return of Godzilla, Legion has many small parts as well as a massive queen. This provides the humans with something they can combat and the giant monster something of its own size to fight, also. This is reflected a bit on Cloverfield, in which the gigantic monster has human-sized parasites, bringing the conflict to two different levels. In an interesting twist, humans attempting to deal with the giant pod do very poorly, and Gamera, when attempting to deal with the smaller Legion creatures, nearly gets killed.

The smaller Legion are sort of hunched-over bugs with one eye and a lot of pointy bits. Like Warhammer Tyranids spiky. It's very clear that they are not here for anything but conquest. 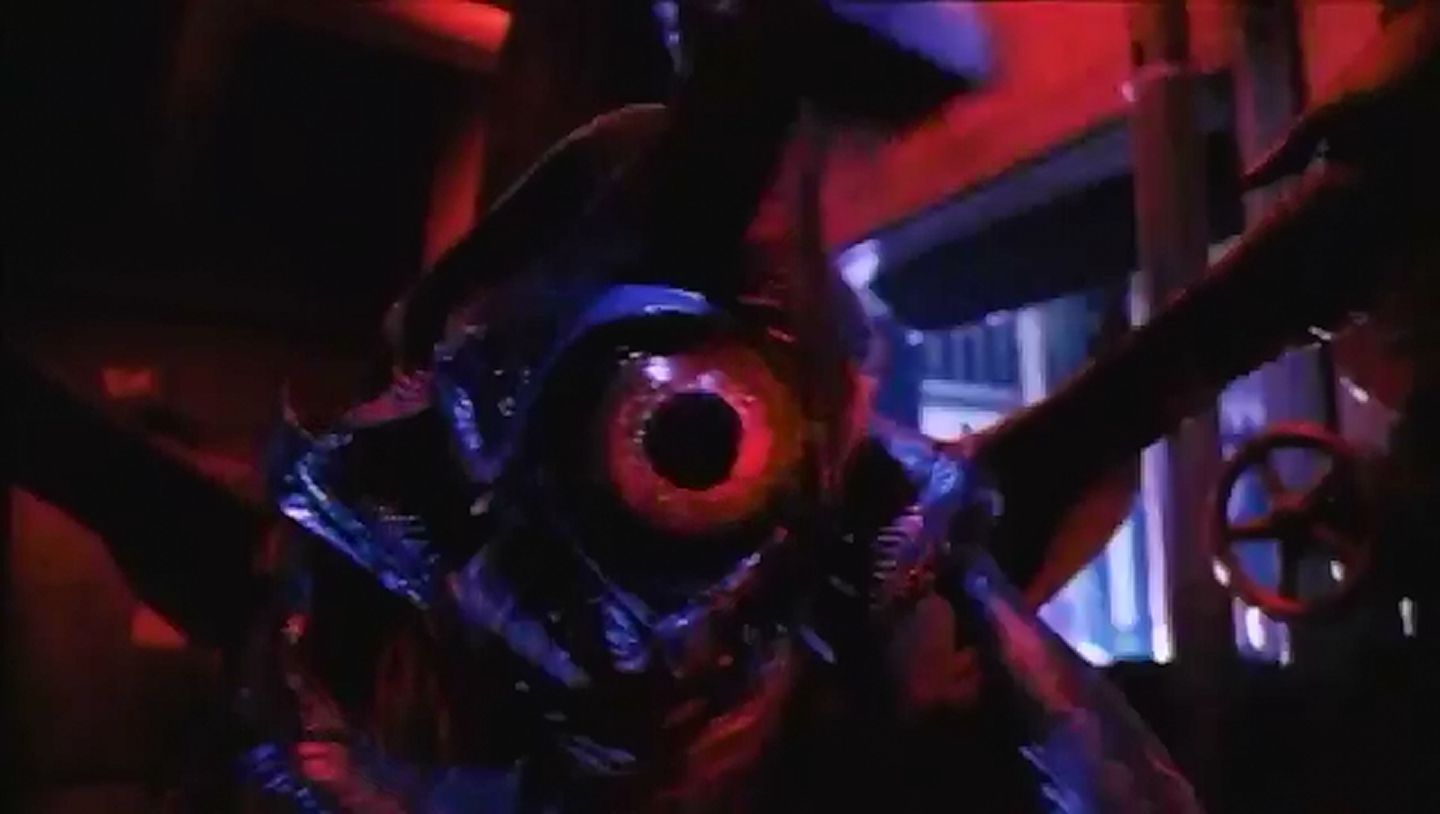 Like Hedorah, the larger legion creature has a life cycle. It begins as a gigantic plant-like pod, and eventually hatches into the gigantic Legion queen. 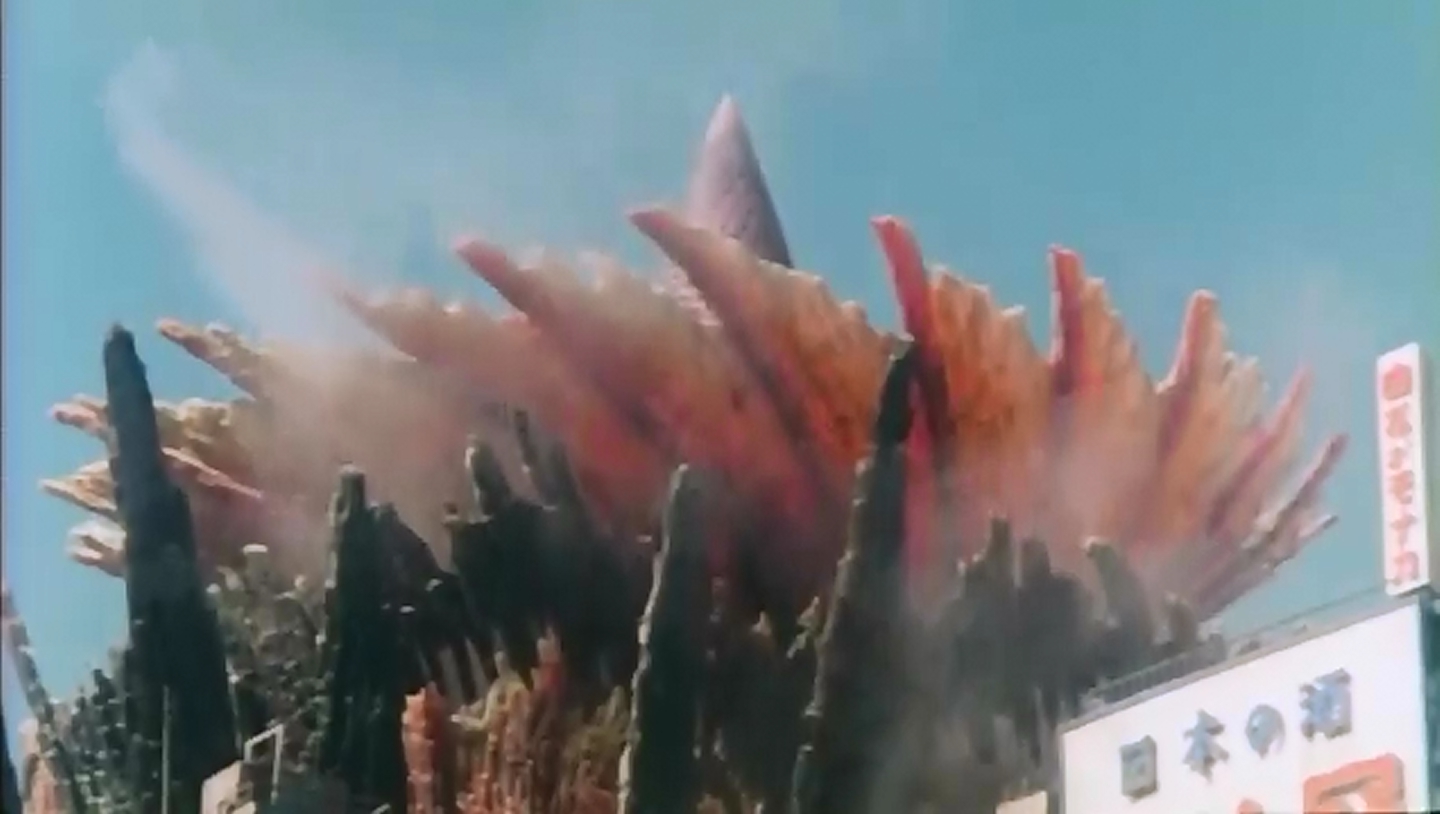 The Legion Queen is in a Serizawa class all by itself. With ten long claws, a protective shell, a huge horn above its face, and a scream like stressed metal, it's as menacing as any kaiju put to screen. It must have been insanely complex to pupeteer. And just when the audience wonders if it has an energy weapon, it's head-horn splits open, and Gamera gets zapped. The beam is so strong that it takes a chunk out of Gamera's shell. It can also direct energy out of its spindly limbs and create an barrier. Gamera's clearly outclassed. It's just a giant, fire-breathing turtle that can fly. 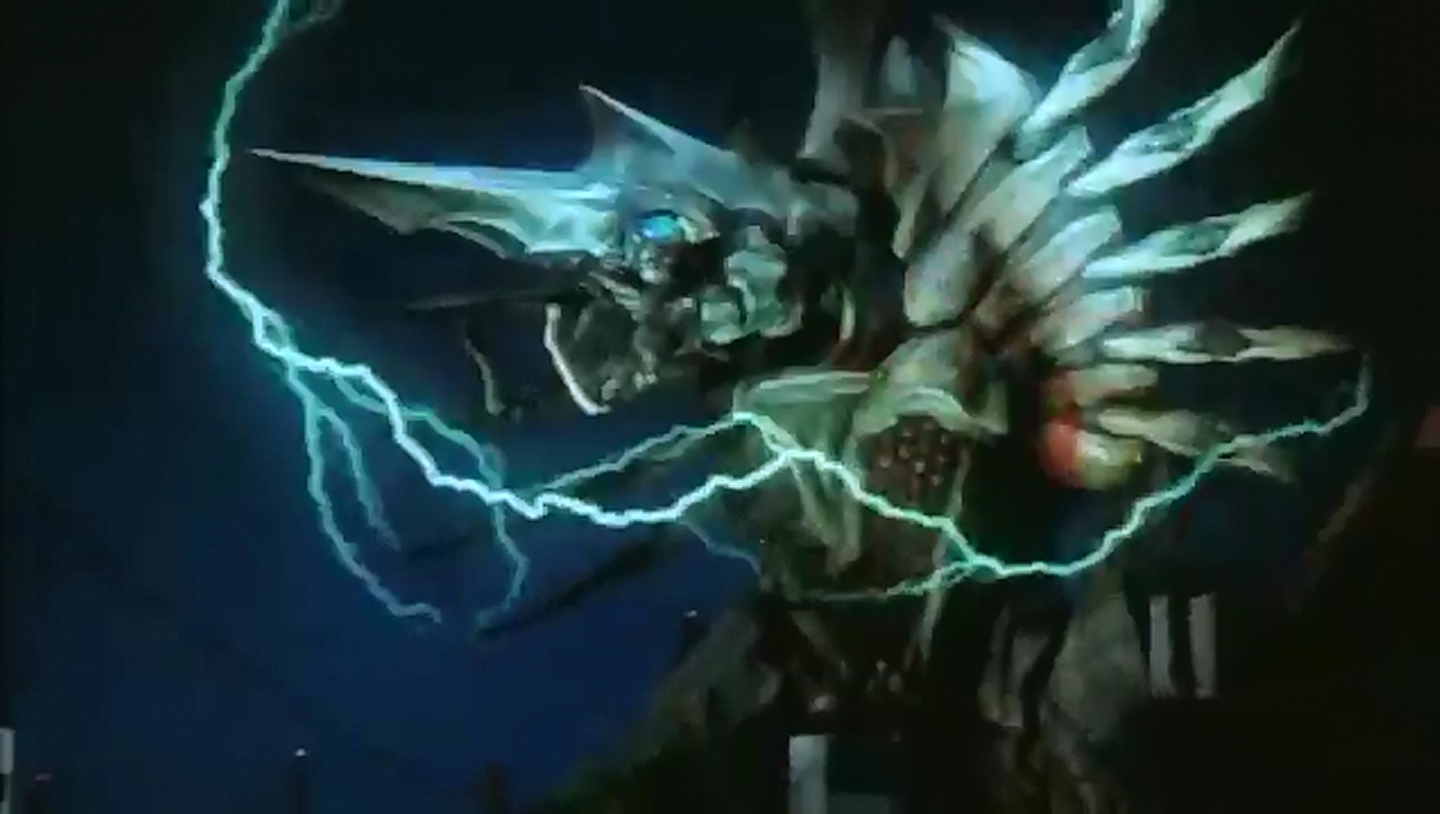 Like so many kaiju, the Legion Queen has redundency built in under its redundencies. When Gamera pulls off the two horns that deploy the blue cutting beam, and it has whippy energy tentacles that lash through anything. 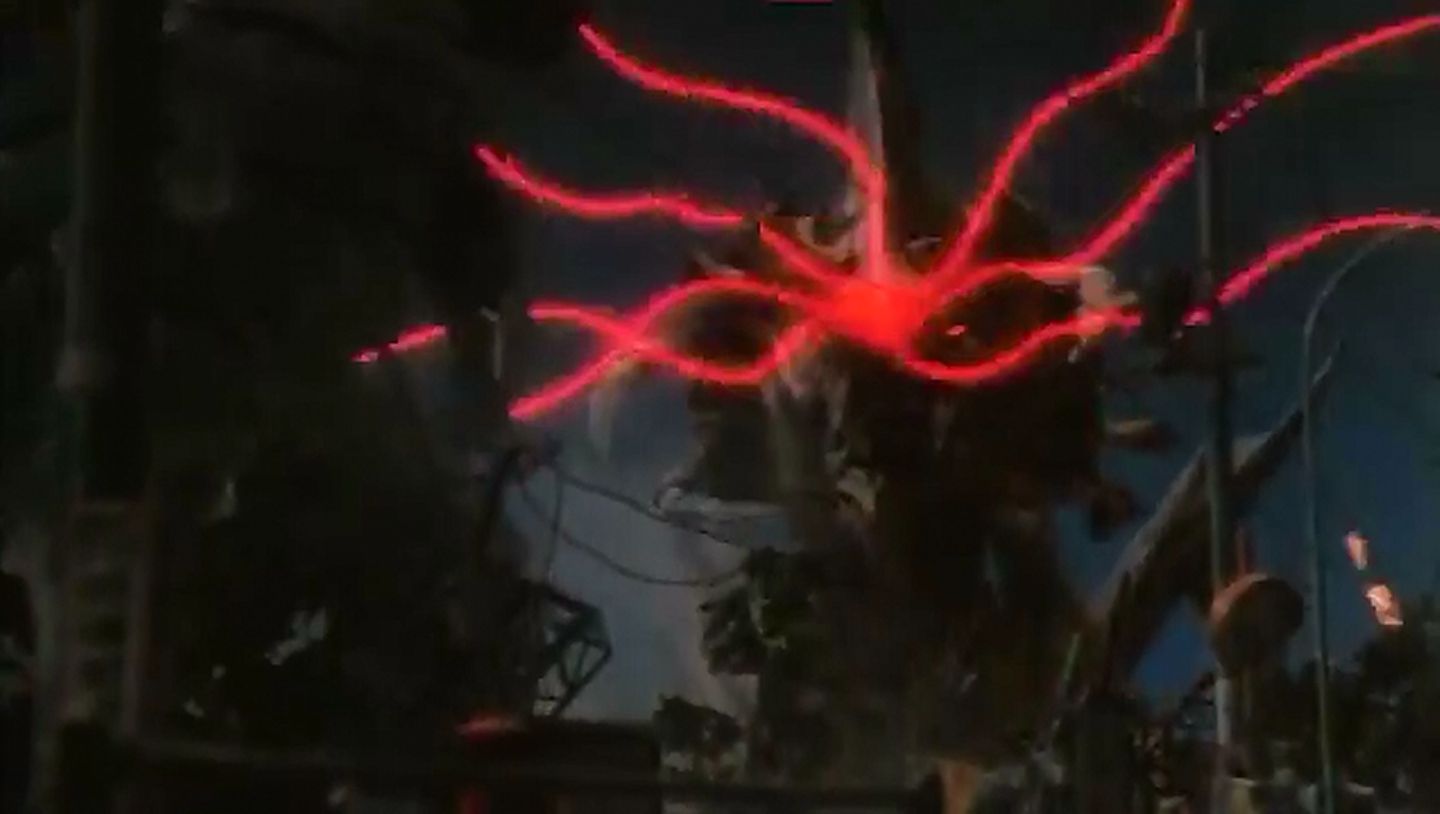 And there's plenty of monster action. Gamera initially fights the Legion queen to a standstill. But he errs when he attacks the second bloom, which opens in Sendai. It explodes in a massive, nearly nuclear, fireball, turning Gamera in a charred, immobile hulk. 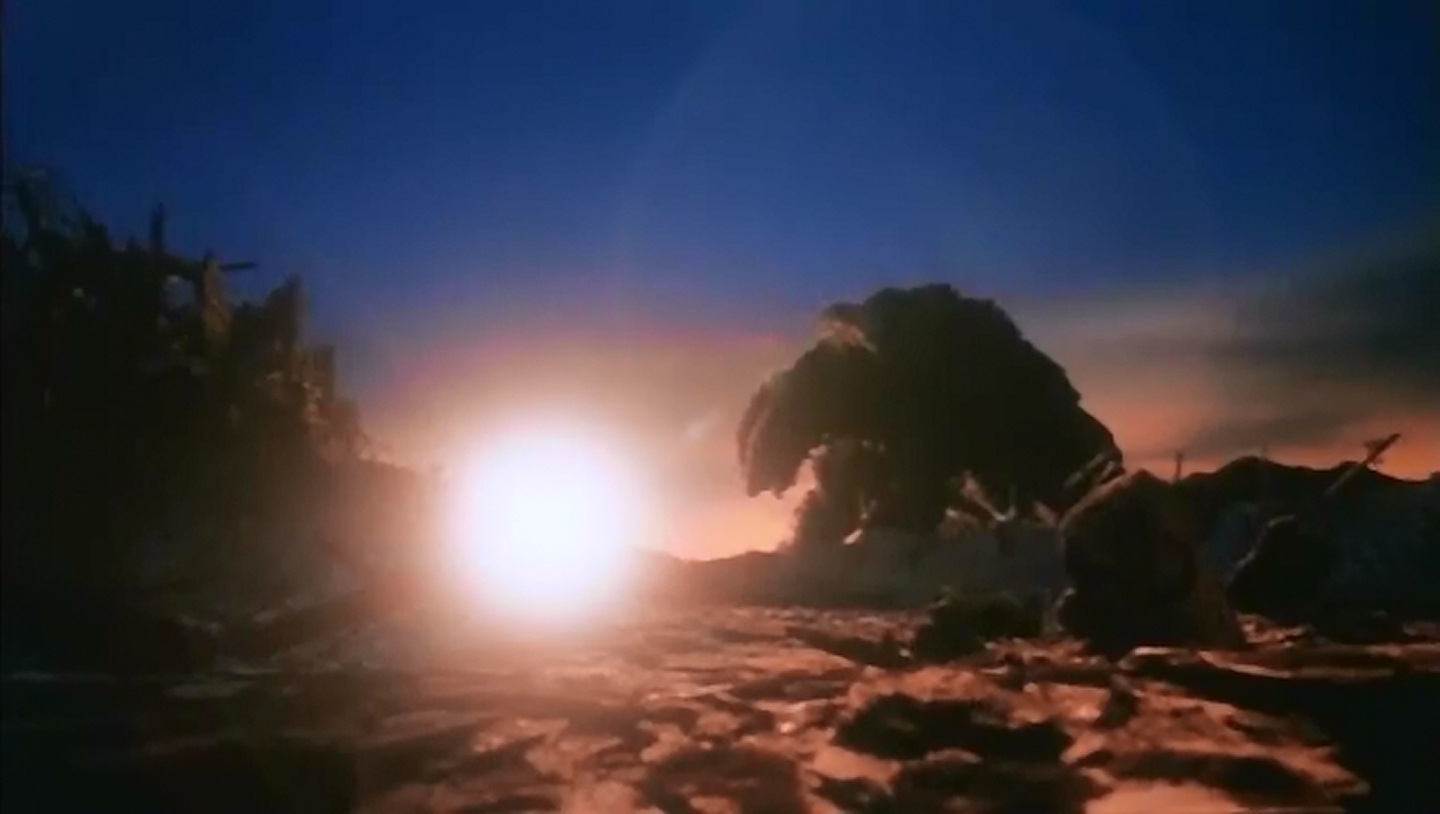 Asagi Kusanagi appears again, sheerly by coincidence, having going for a ski vacation before the monsters attacked. Once involved, however, she again proves essential to Gamera. With an accumulation of people around the burned, immobile Gamera, Asagi's amulet chanels their love, and heals the gigantic turtle. But the talisman breaks. The ramifications of this are explored in Gamera 3: Awakening of Irys. The film reuses the idea of the invader making the environment more comofortable for itself, but this time, they're producing more oxygen, and increasing pressure, for example. This is why the explosion of the second pod was so massive--all the oxygen build-up. 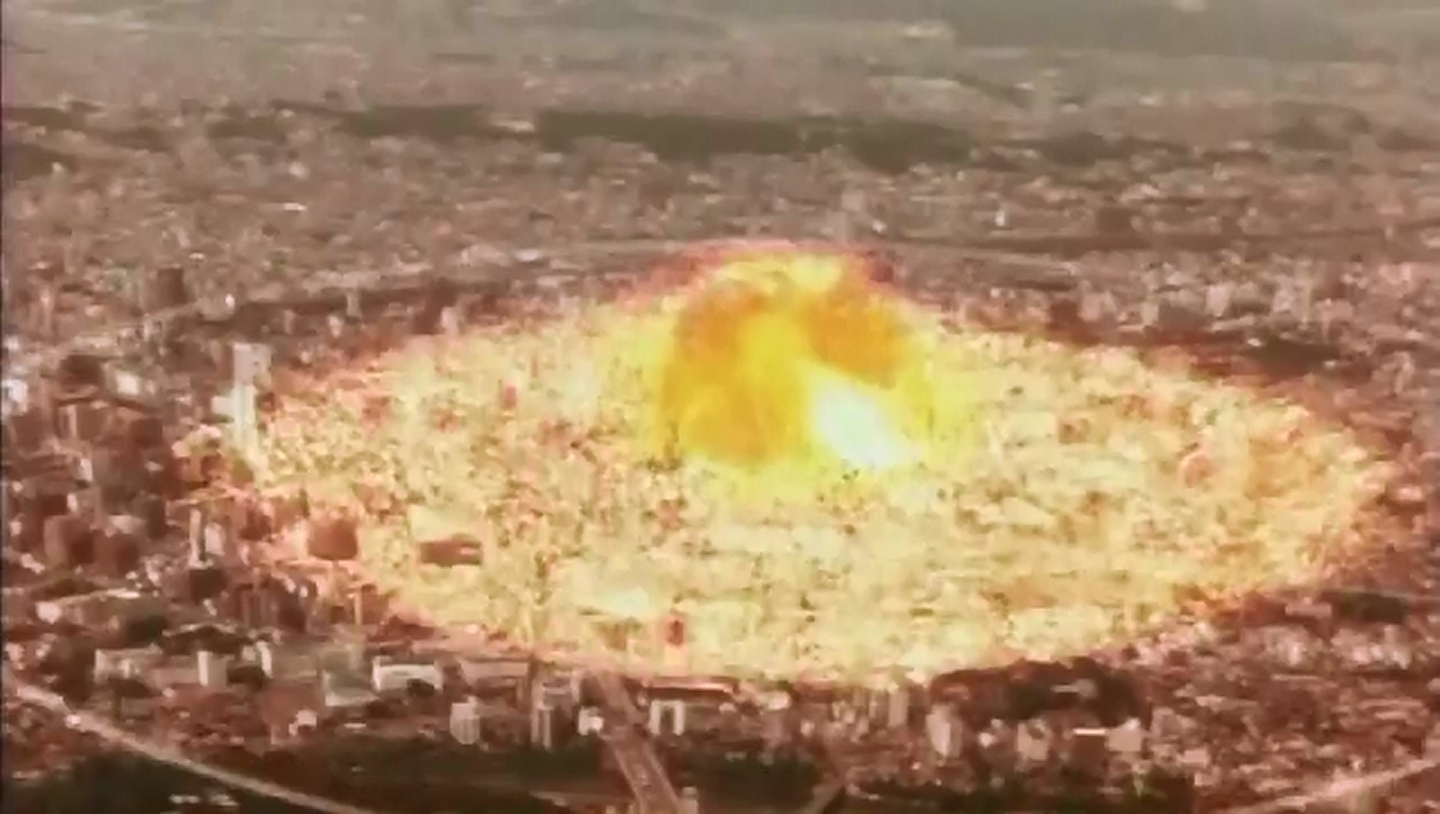 There's a certain weird, X-Files feeling to the initial quarter of the film. Electromagnetic disturbances make the sky glow green, and radios don't work properly. And why not? X-Files was hot at the time, and very popular in Japan. But the mysterious atmosphere is difficult to manintain is a Gamera film. Still, 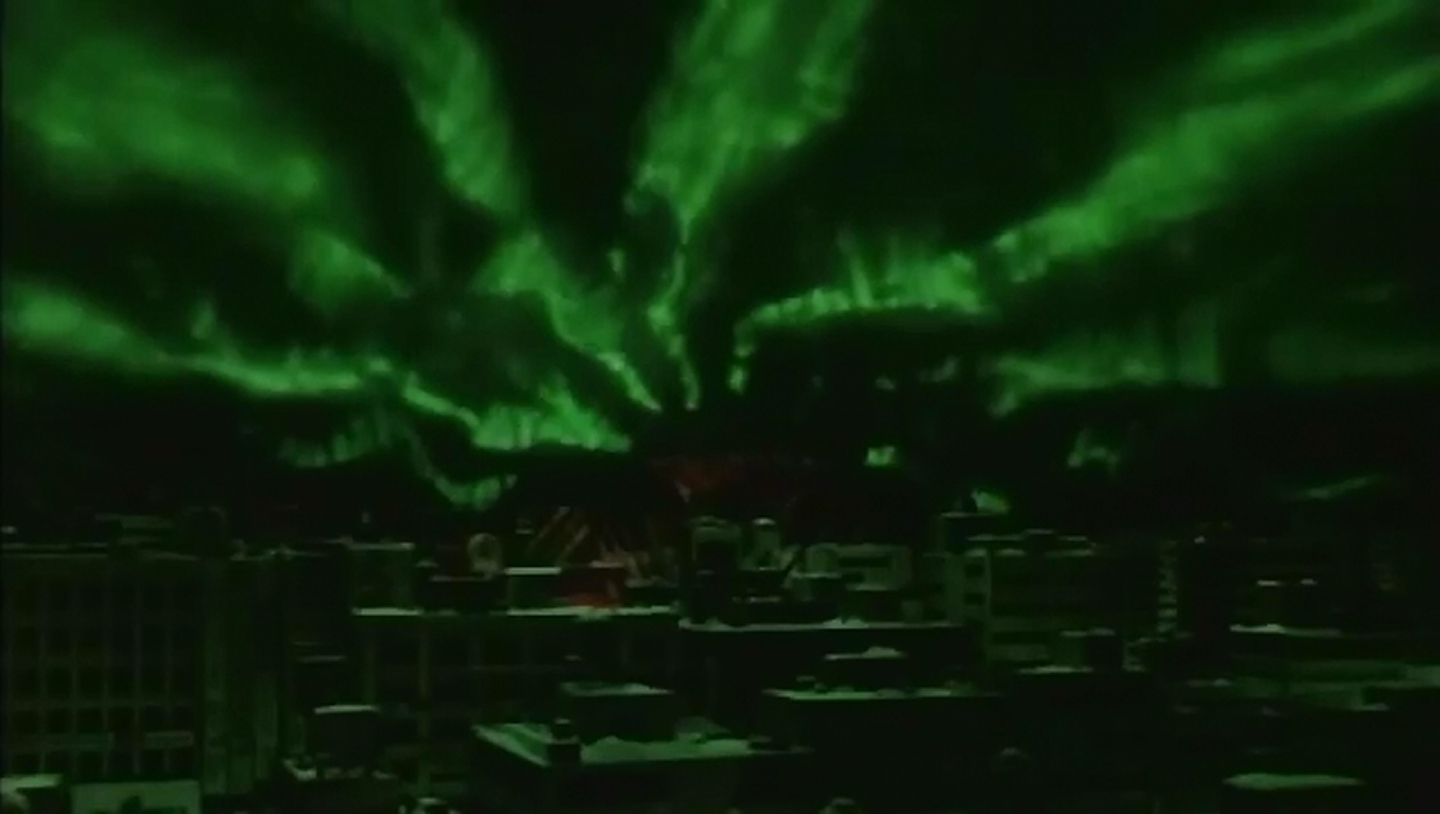 Again, the miliatry is valorized, even to the extent of cooperating with the science people, who are often at odds with the military in films following Ishiro Honda's style. A scientist who discovers and lures the smaller Legion swarm away, allowing Gamera to fight the Queen without having to take on the smaller creatuers. The military, finally realizing that Gamera is fighting against the Legion Queen, lobs some missiles at her, resulting in the loss of a couple of limbs. And the military takes care of the smaller Legion. 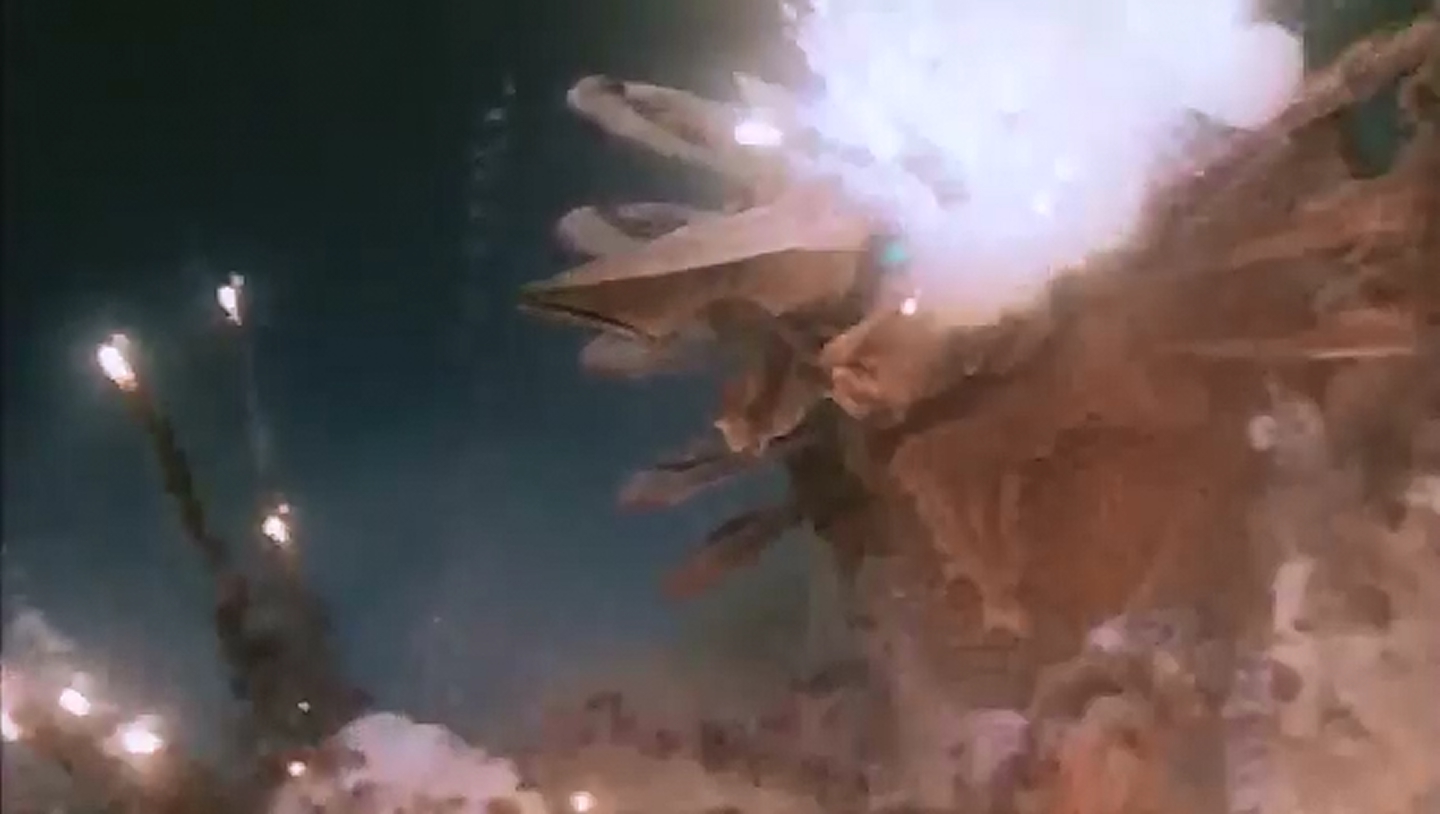 Gamera unleashes a new weapon. Having destroyed his connection to Asagi, and no longer able to draw power from humans, it draws it from the world itself. 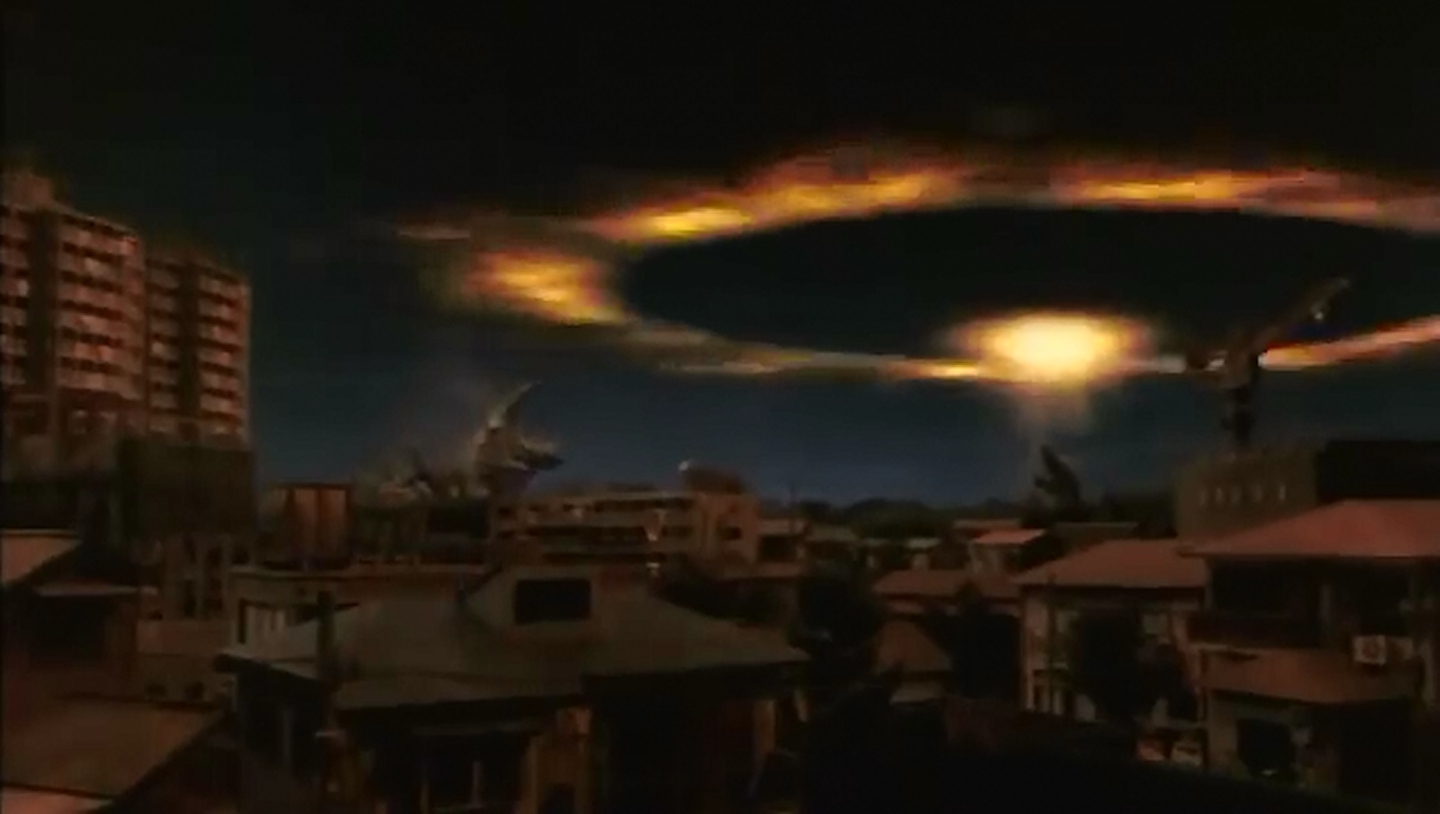 This powers a huge power blast from its chest. And that's all for the Legion Queen. 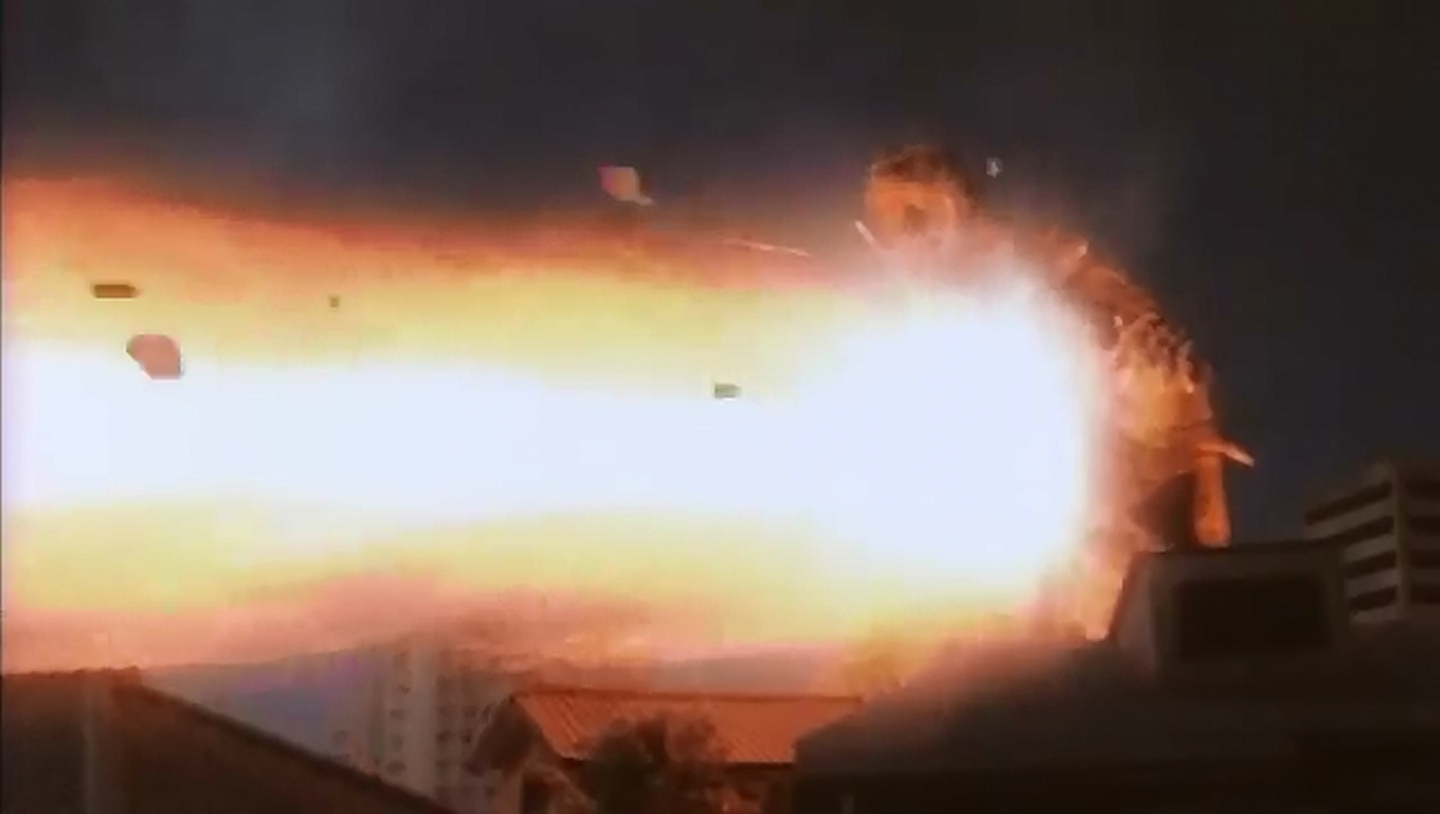 Gamera 2: Attack of the Legion is one of the best the kaiju genre has to offer. The innovation of the two forms of the monster, each one something that only one force, Gamera or human, can handle, is a brilliant idea, executed well. It gives the humans something to do other than document the destruction and tell the audience how to feel. The execution of the film is excellent, the characters breathe, Gamera faces a tough challenge. Legion Queen is awesome. What more could you ask for?

Next up: Although Godzilla is dead, Toho didn't get out of the kaiju business.
Posted by John Goodrich at 3:14 PM