There are good movies. Movies in which the director knows what they're doing, and care about what happens on the screen. Movies with a decent script that is transformed onto the screen by the hard work of actors who think deeply about the lines they are about to deliver, and about the history of the character they are portraying. Zarkorr! The Invader is not one of these films. It's facile, the script perfunctory, the monster action divorced from the human plot. It's pretty much everything that I dislike not only about monster movies, but movies in general.

Produced in 1996 by Monster Island Entertainment, a division of Full Moon Enteratinment, a small company dedicated to producing low budget horror films. The Monster Island films are the most perfunctory kaiju films until The Asylum decides to make Attack from Beneath to cash in on Del Toro's Pacific Rim. I suppose we could argue budgetary considerations, but Gareth Edwards' Monsters demonstrates that even microbudget films made with care can be good.

The first four minutes go moderately well. Zarkorr emerges from a bluff in Mount Aurora, and then goes on to stomp the town of Aurora. Since this is not the continuation of a franchise, Zarkorr is all alone, rather than having another monster to fight. 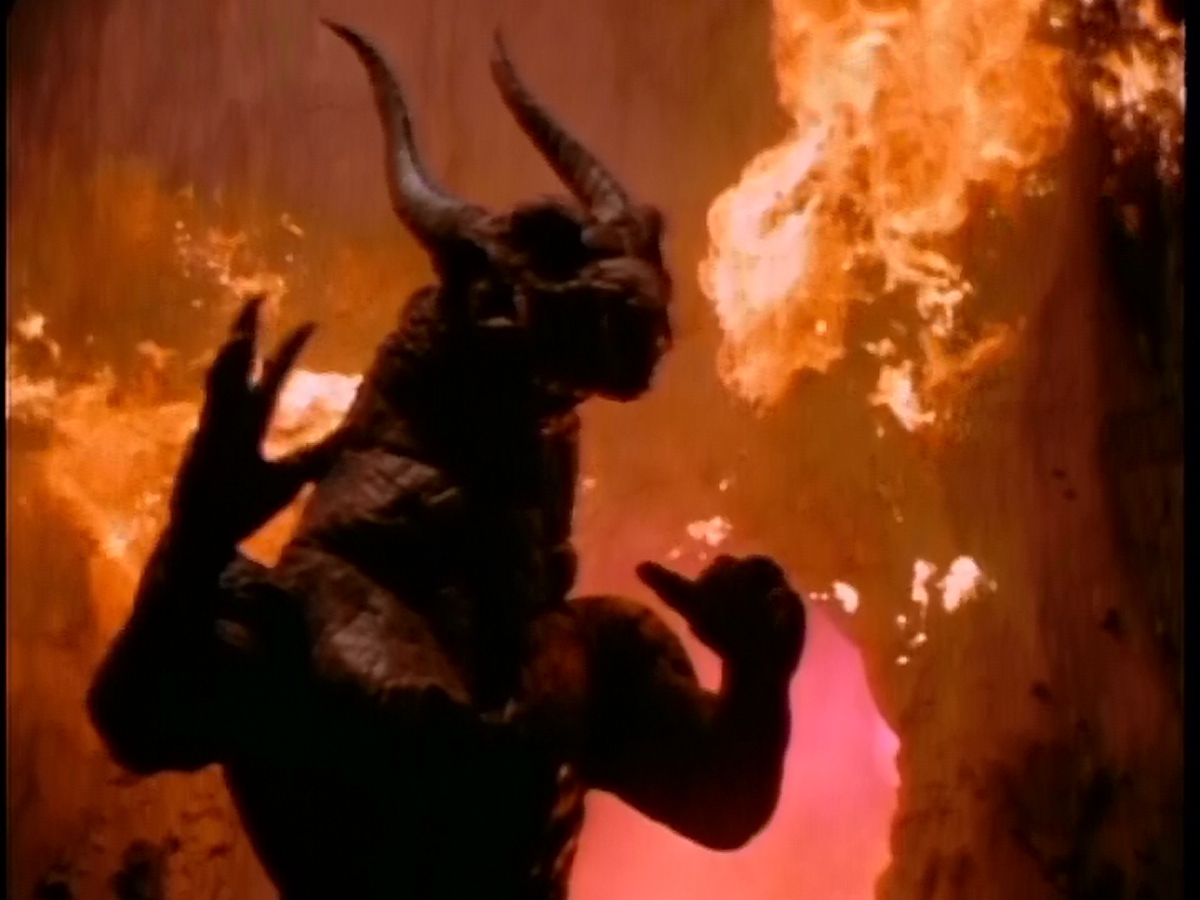 Zarkorr is pretty good looking. As a suit, it's a lot slimmer than the more ponderous monsters I'm used to from Toho. It has a muzzle full of fangs and enormous horns that make it look devilish. Rather than a breath weapon, it shoots some sort of beam from its eyes. The roar is the T-Rex roar from Jurassic Park. Which almost never varies, and gets old pretty fast. 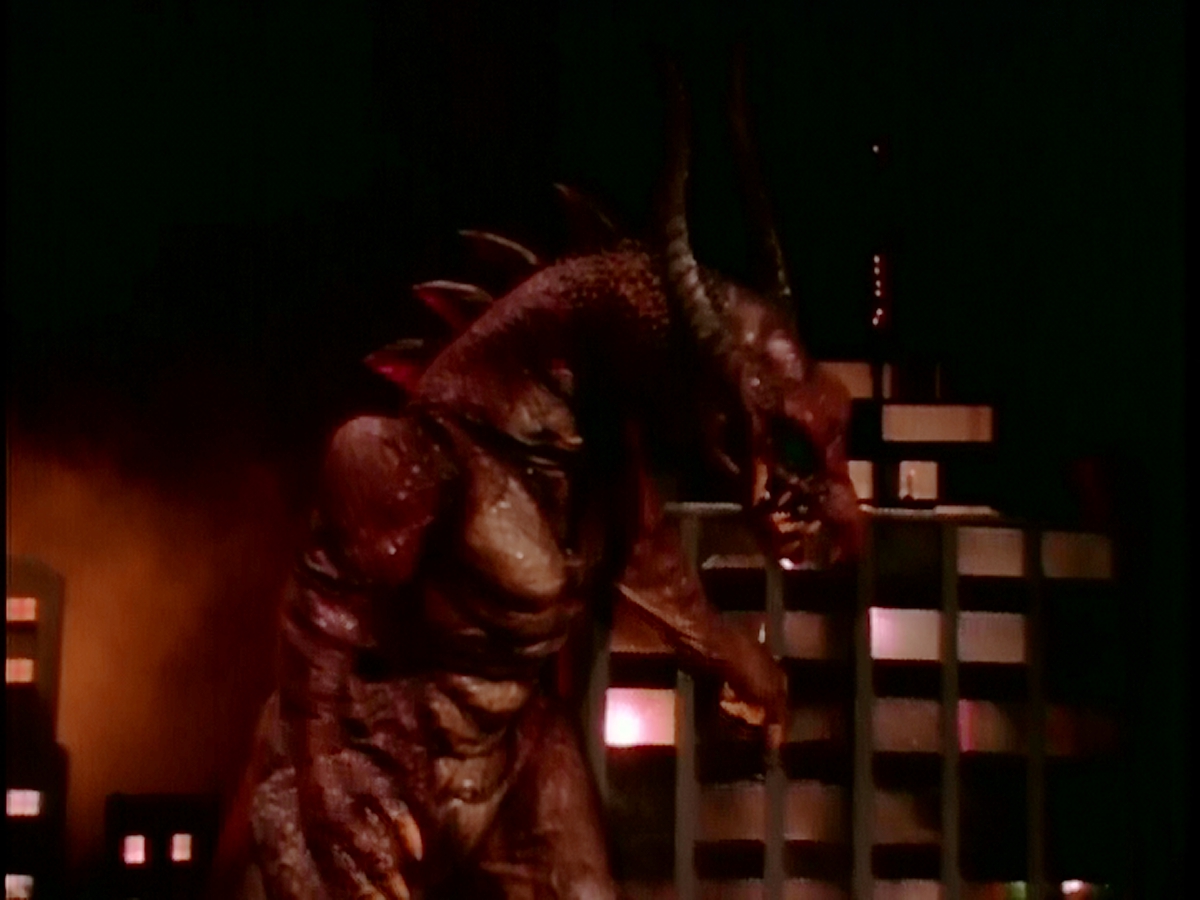 And the estimated stats for Zarkorr are way off. Here we see him just behind a five story building. He can't be more than half again taller than it, meaning he can't possibly a hundred feet tall, let along the hundred and sixty-five that the movie claims. 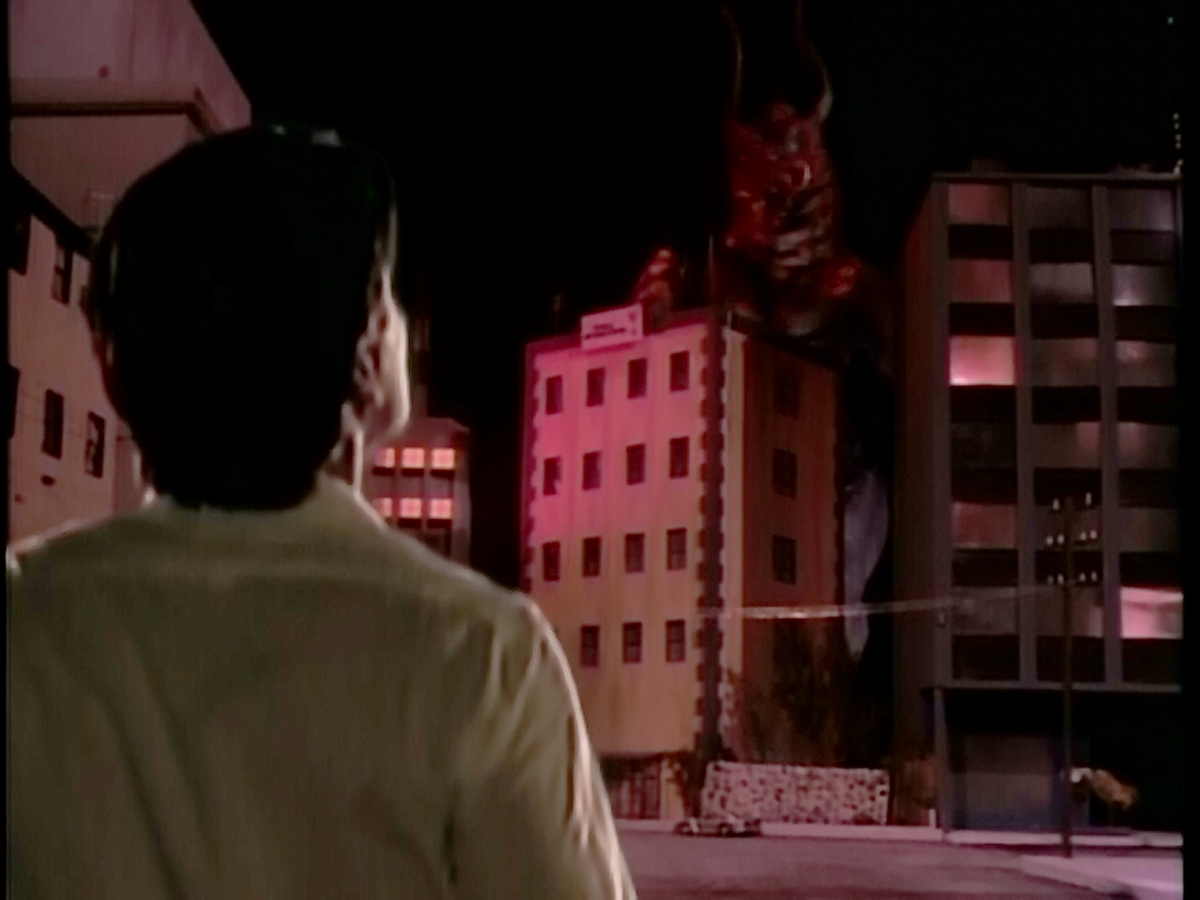 However, when the opening shot of our protagonist is him drinking coffee, I begin to worry that we've entered Coleman Francis territory. Luckily, we aren't. It's really more Ed Wood or Harold P. Warren. Perhaps competent, but at least comprehensible. There are a lot of unanswered questions, however. If it's 10 in California when Zarkorr awakens, why is Tommy drinking coffee at one in the morning? Why is he still wearing his uniform at home? 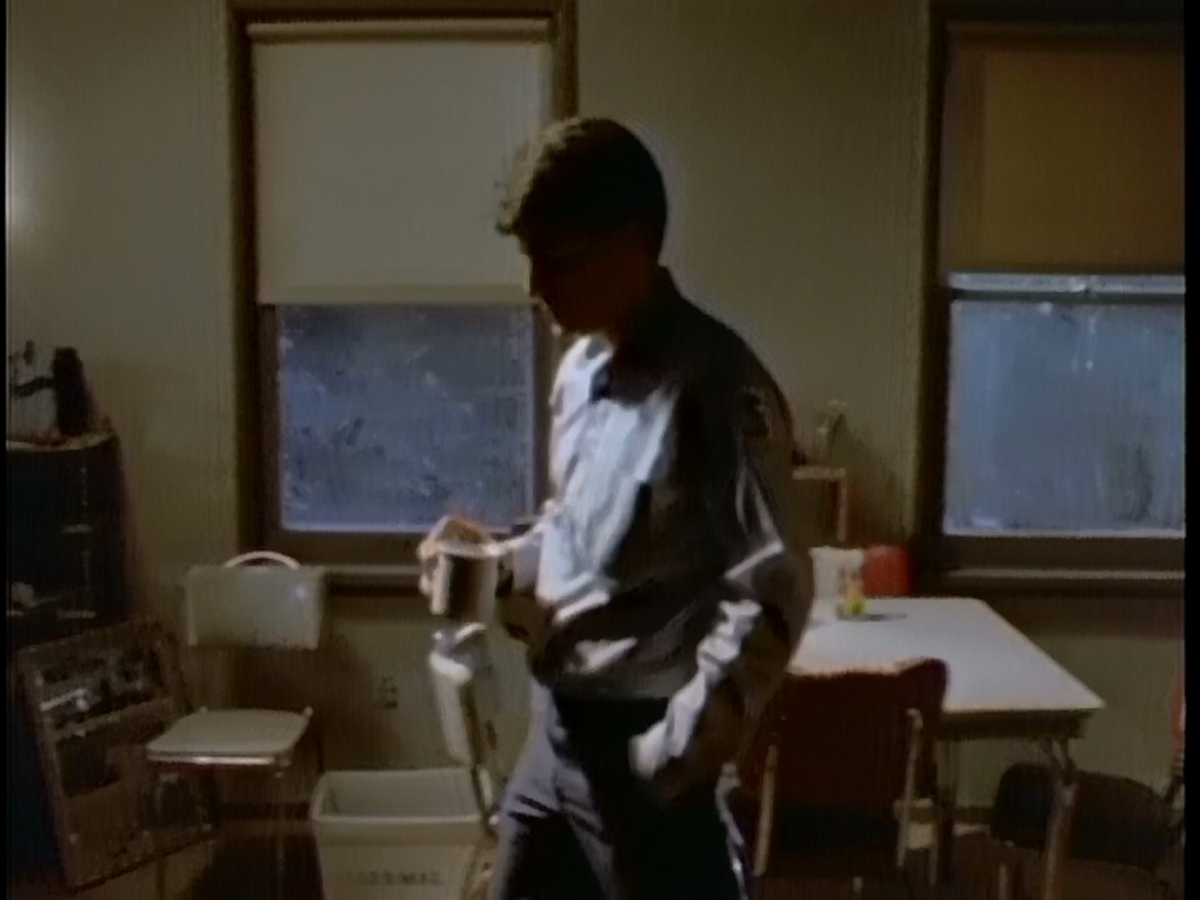 Tommy is visited by tiny projection of an alien, who tells him he has been selected to be the only one who can stop Zarkorr. Like the Shobijin, this contrasts the very tiny, the Proctor, with the huge, Zarkorr. She only exists in his mind, apparently, claiming to be a stimulation into his cerebral cortex. Nevertheless, she casts a shadow, and can interact with objects. 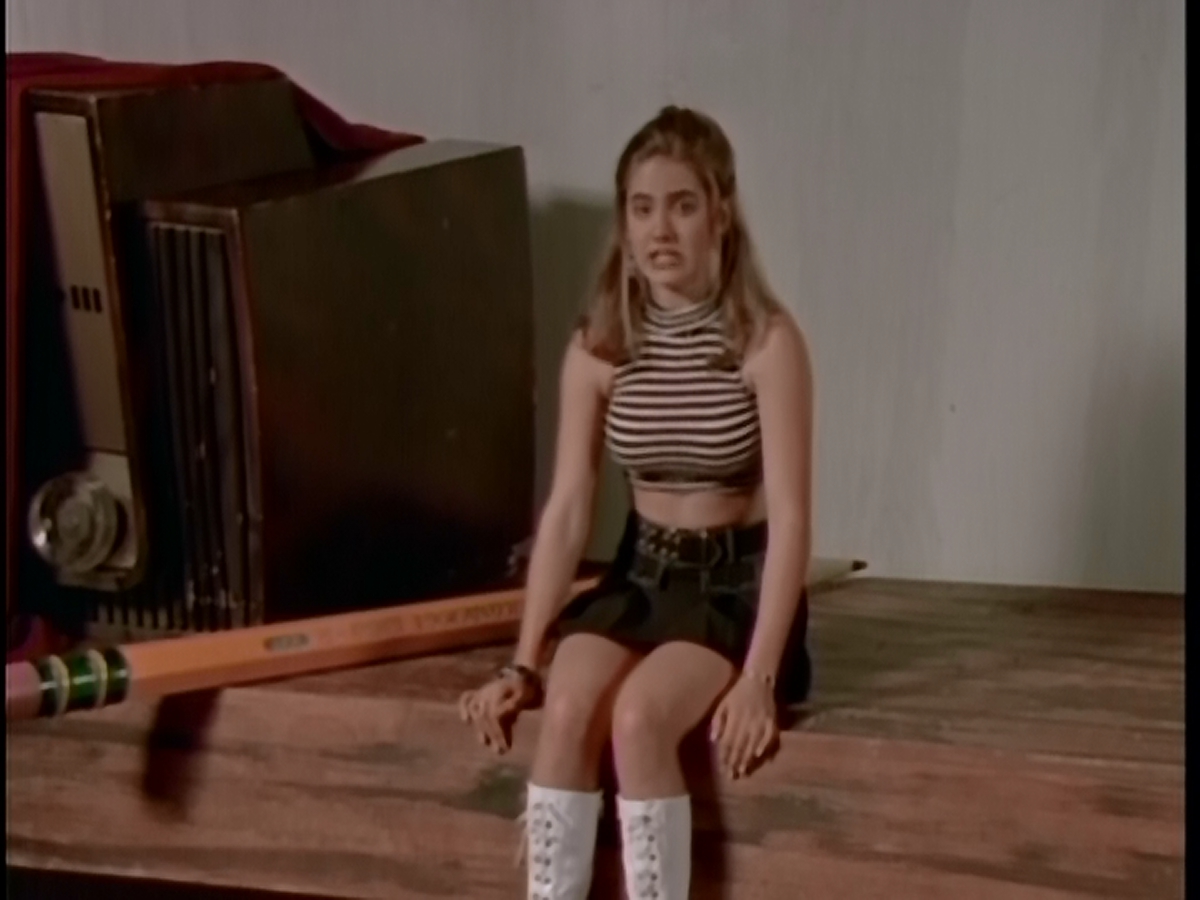 If you ask me, it seems much more likely that she was sent by malicions alien invaders, perhaps the Xilians, actively trying to prevent humanity's successful defense against the invader. Or maybe they're just laughing their asses off as no-man Tommy tries to do something against monstrous Zarkorr. The plot is so stereotypically contrived, the aliens have sent a problem and a solution, and it's up to you, Average Person, to defeat him. And there's no twist. He doesn't win because of his big heart, or because of his upbringing, or any unique qualities of the character. He wins because he finds the MacGuffin provided by the aliens, thanks to one of Dr. Martin's friends, and uses it. And that's not the only script problem. Whenever Tommy describes the alien projection that contacts him, he uses the phrase Tiny Mall Tramp. And while that may be true to life, since Tommy is the average person on the planet, repetition like that is not good writing. And incidentally, if your character says "I know it sounds crazy but..." it's quite possible that your plot is crap. 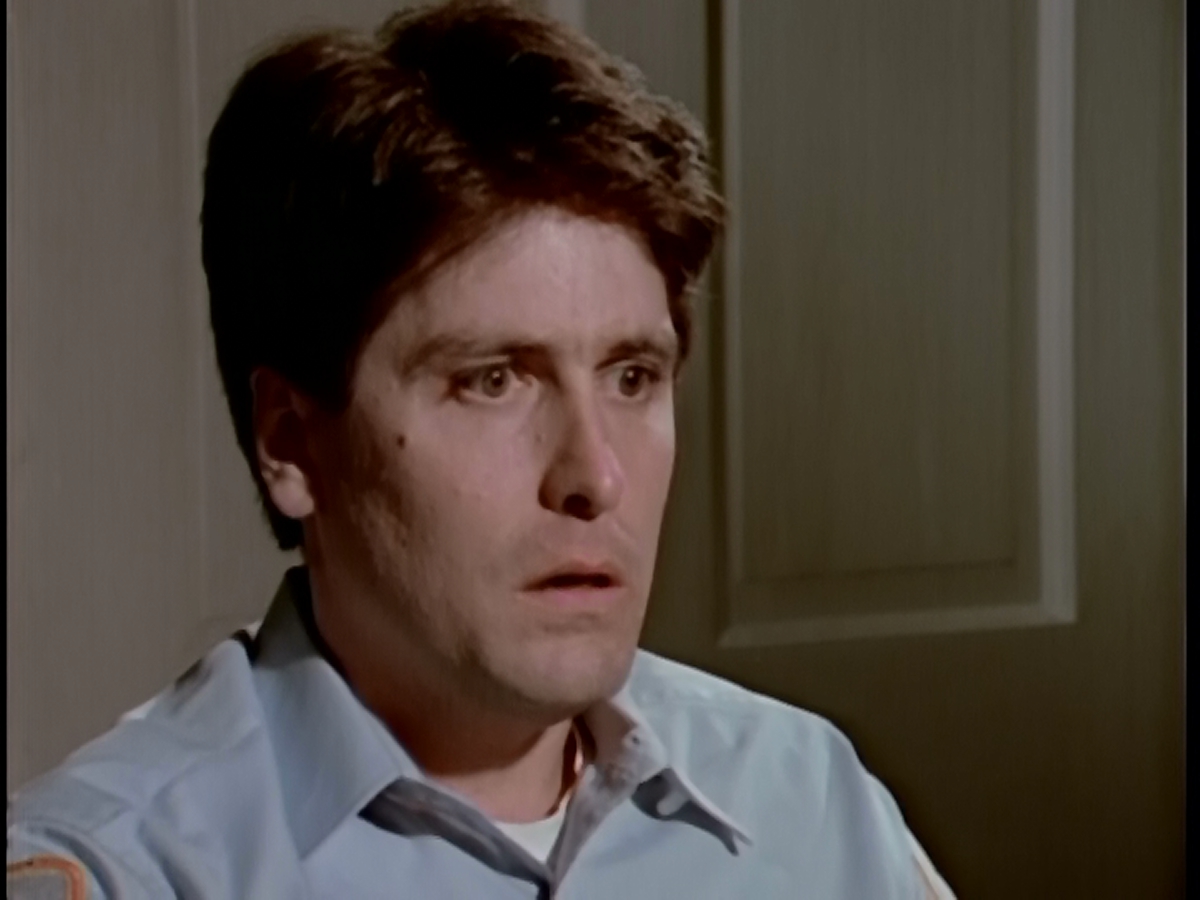 The manufactured conflict of the film is what takes up the majority of the time. Tommy goes to a TV station to talk to a cryptozoologist (Dr. Stephanie Martin, in a possible nod to the 1956 Americanization of Godzilla), and ends up with two security guards' guns, holed up in the men's room with Dr,. Martin as a hostage. This was released only three years after the 1993 double event on May 6, in which two post office workplace shootings occurred within hours of each other. Before the movie is half over, and he's explained his mission twice, using the same words the Proctor used. It's like the writer ran out of words and just started recycling what he'd already done. Pad, pad, pad. 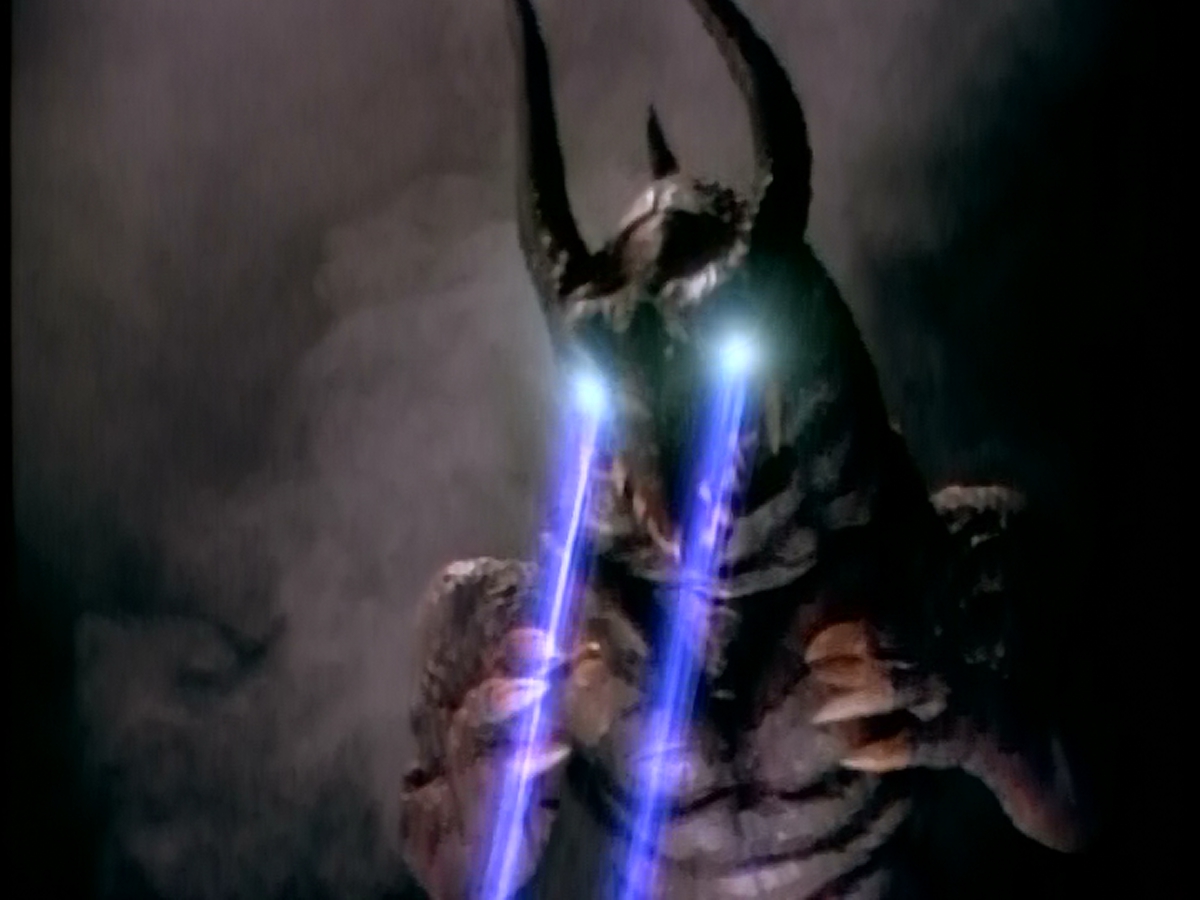 And Tommy isn't sympathetic, unless you like people who fuck up. He loses his head under pressure, consistently does the wrong thing, and couldn't figure his way out of a paper bag. This isn't unique. It recalls the Gamera films, and presages the massively unlikeable characters in Cloverfield. Half an hour in, Tommy has kidnapped and threatened the cryptozoologist at gunpoint, and is melting down. I'd rather be watching any the Gamera films again. Even stock-footage fest Gamera vs Viras.

There's an exciting moment when the Air Force drops a load of napalm on Zarkorr, and Zarkorr clears the skies with its eye beams. It would have been an awesome scene, but I have to picture it myself, because it happens entirely in a radio report. So this is what we see. 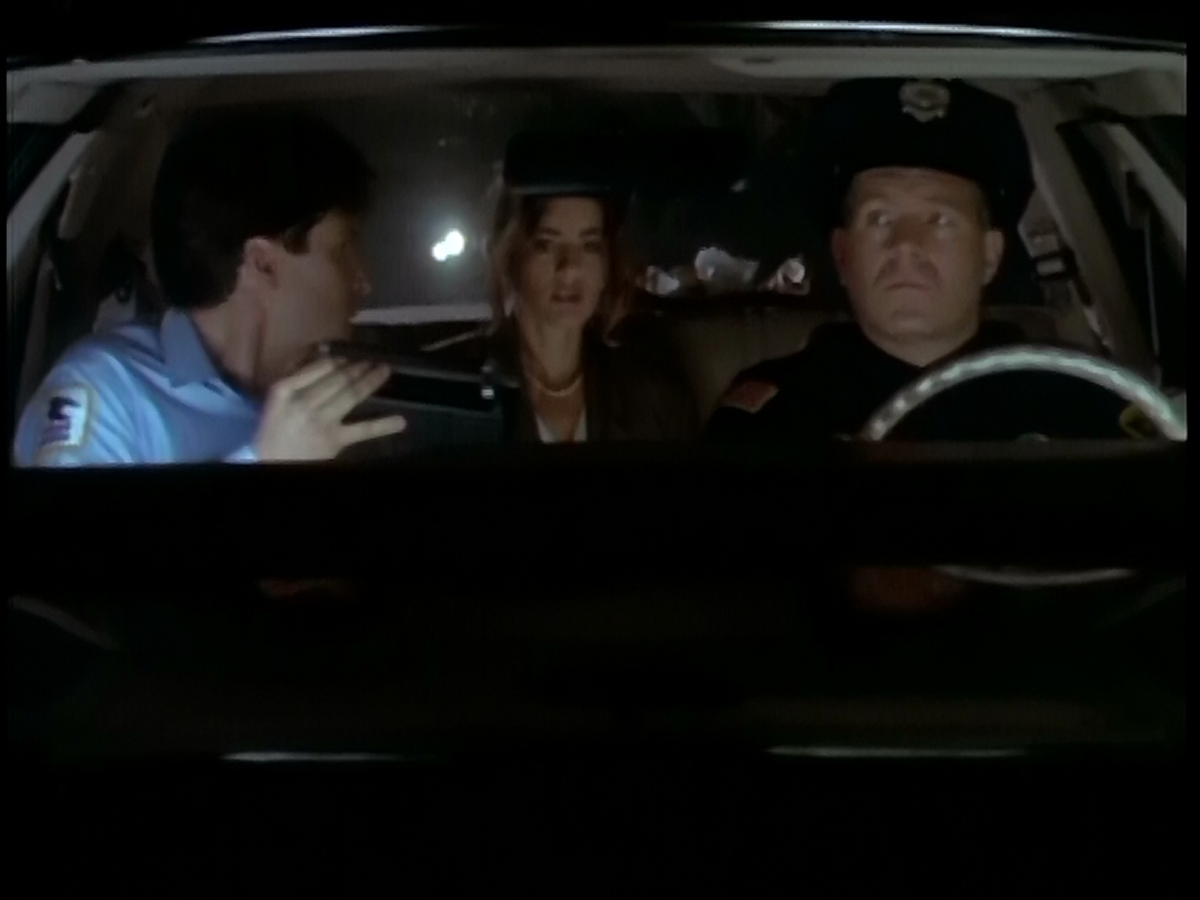 They then go to the lair of a hacker who is even more annoying than even Tommy. Oh, and the Dr. Martin has decded that she's going to help Tommy. They must end up together in the end. (Future self note: yep, they do) Why? Because she serves no other purpose. She's a prize to be won, who doesn't actually contribute anything.

Ultimately, they discover a crashed UFO with an ultra-hard surface in Arizona. Tommy uses it to reflect Zarkorr's beams back at him, which destroys the monster. Hurray for mediocrity, the world's most average man is now conisering a presidential run. 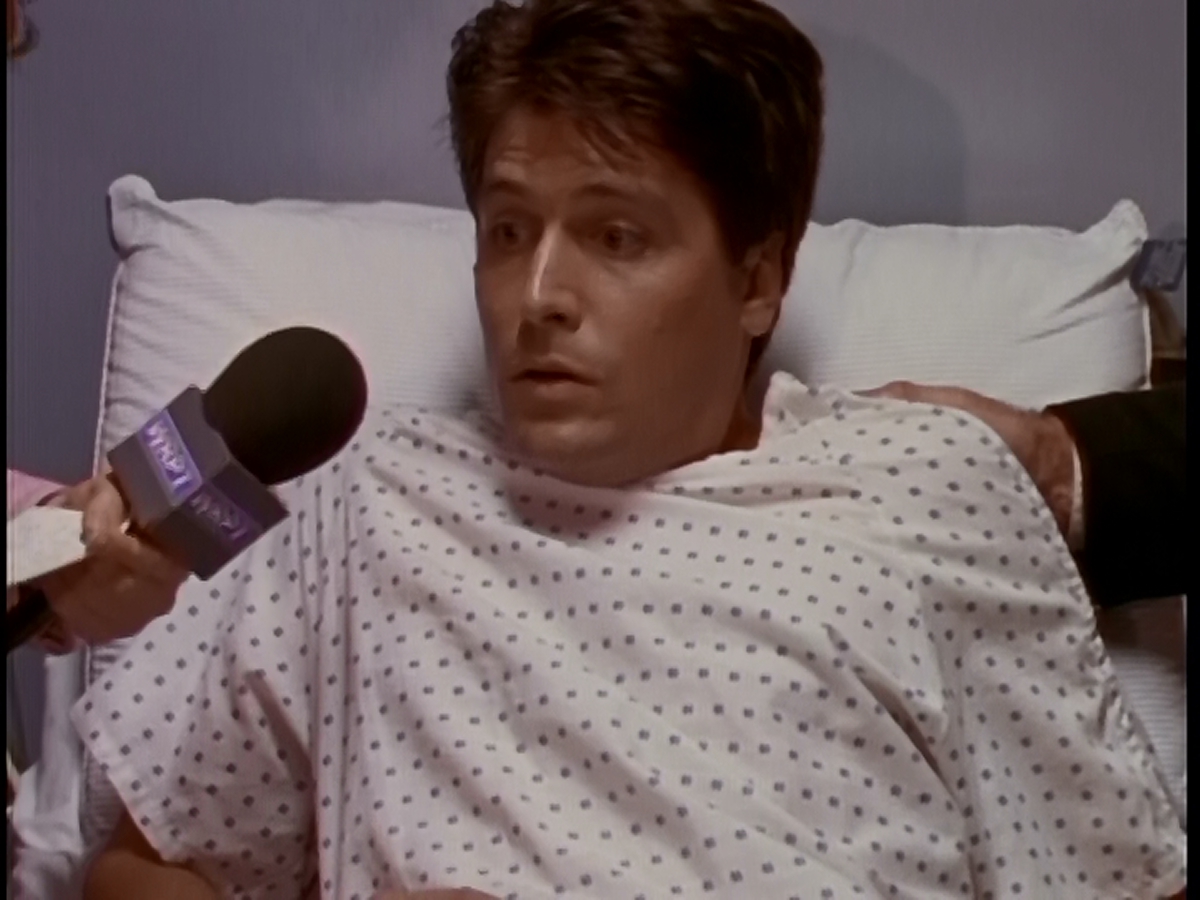 This film has two directors; One, Michael Deak, worked on the Zarkorr sequences. In most other films, he would be considered the Special Effects Supervisor. He has gone on to work on Pirates of the Caribbean films, and Tranformers movies. He is also responsible for the suit and monster effects for Monster Islands other outing, Kraa the Sea Monster. Aaron Osbourne, who also directs Kraa the Sea Monster, is better known as the production designer for such films as I am Sam, Kiss Kiss Bang Bang, and Employee of the Month. But he would only direct three films, two of them the two Monster Island Entertainment films. 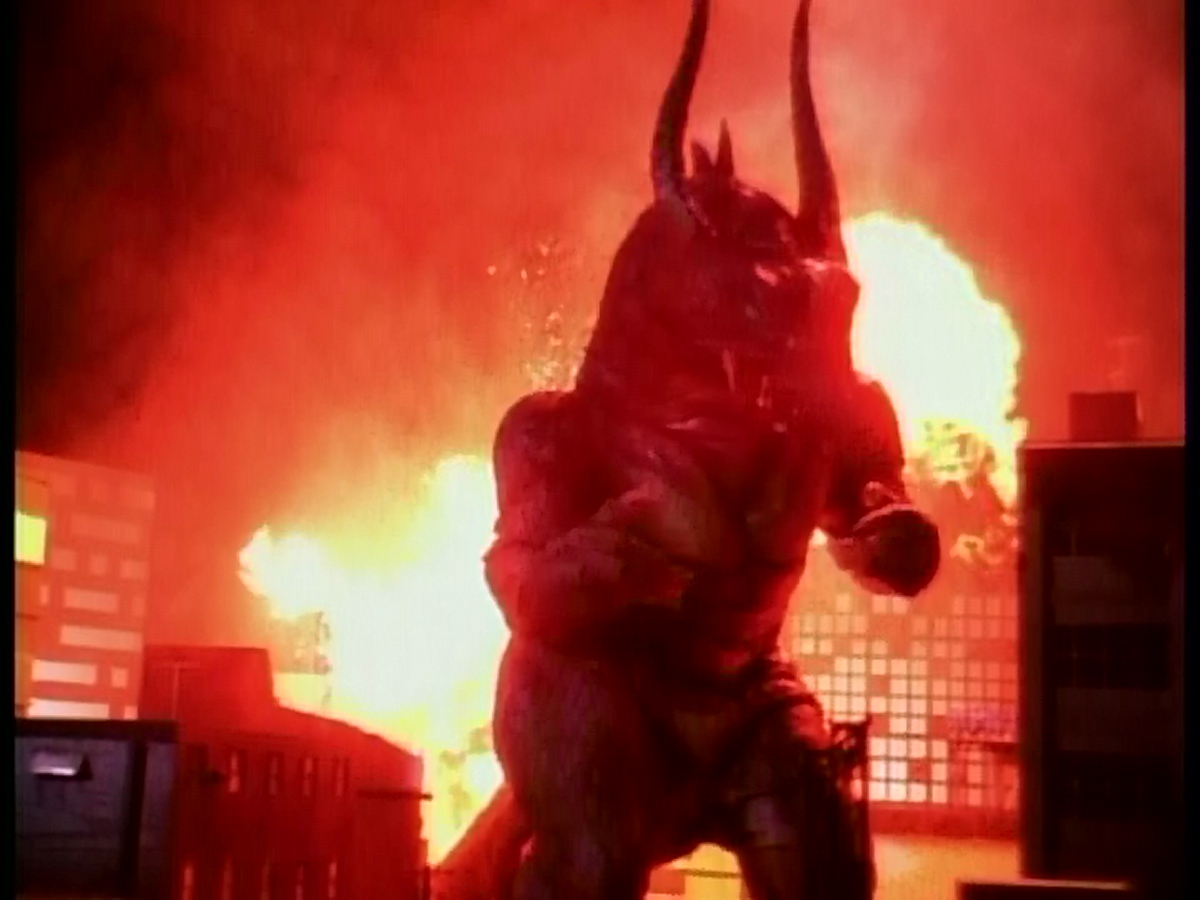 What's upsetting about Zarkorr the Invader is not just that it'a terrible movie. It's that it follows the same precis as 1954 Godzilla. A monstrous juggernaut is running amok, and it's up to the protagonst to save the world. Only here, the person who can stop the monster is Joe Average, who the scriptwriter seems to think the audience can probably sympathize with more easily than someone who knows something. Or perhaps because he thought there were more tumbling blocks he could put in the way of Joe Average. But he couldn't think of a better way to get Joe Average into the mix than to make it all an alien test. And that's crap.

The last insult? There's a Zarkorr from Marvel's Tales of Suspense comic. It turns out the was also an issue that name-dropped Kraa, so I think those two points establish a line. Even the title is lazy. Ugh. 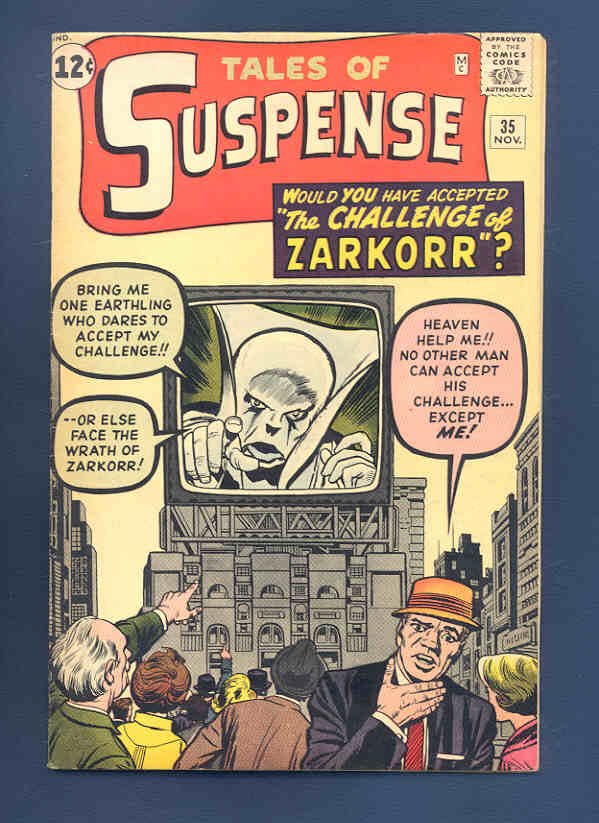