Toho's general plan is to produce one kaiju film a year. With Tri-star making Godzilla in the United States, they turned to their second most popular character, Mothra. 1996, 1997 and now 1998 each saw a Rebirth of Mothra film. THe franchise is more for kids than the mainstream Godzilla franchise. And I can see Toho wanting to keep their hand in Kaiju production. They were planning to return to Godzilla around 2005, and didn't want to get rusty.

The usual Rebirth of Mothra accoutrements are here. A beautiful Mothra, respendent in its colors, the twins Lora and Moll, as well as their black-wearing sister Belvera. A child protagonist is involved, but he's in the mould of the series, reasonably competent, not annoying in the way Sohwa-era Gamera protagonists were. Gone is the heavy-handed environmental message that was problematic in the last two films. 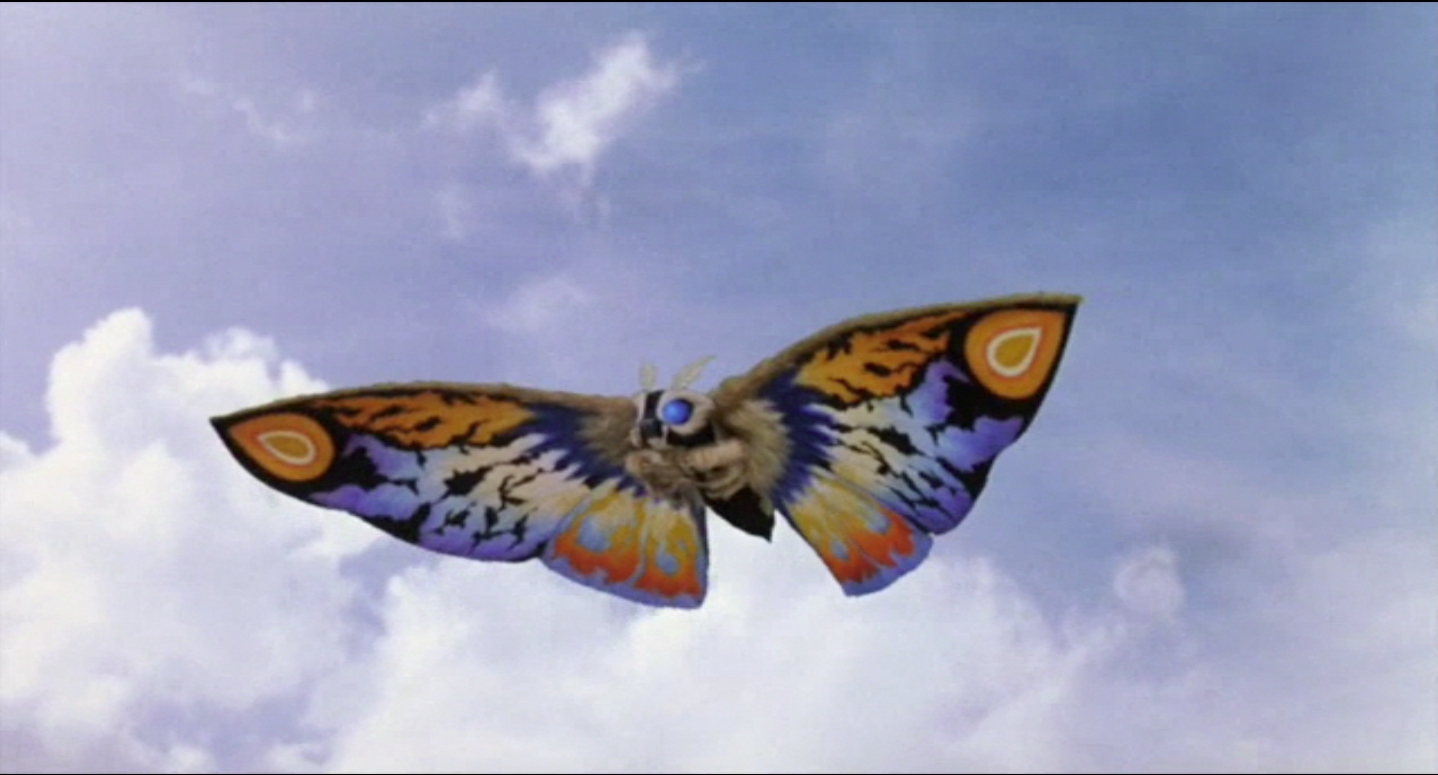 The problem this time is Ghidorah, and in a nice tribute to the character's 1964 debut, Ghidorah the Three-Headed Monster arrives via meteor. Only this time, it's a bit different. The meteor breaks through the Earth's crust, freeing Ghidorah, rather than carrying him. 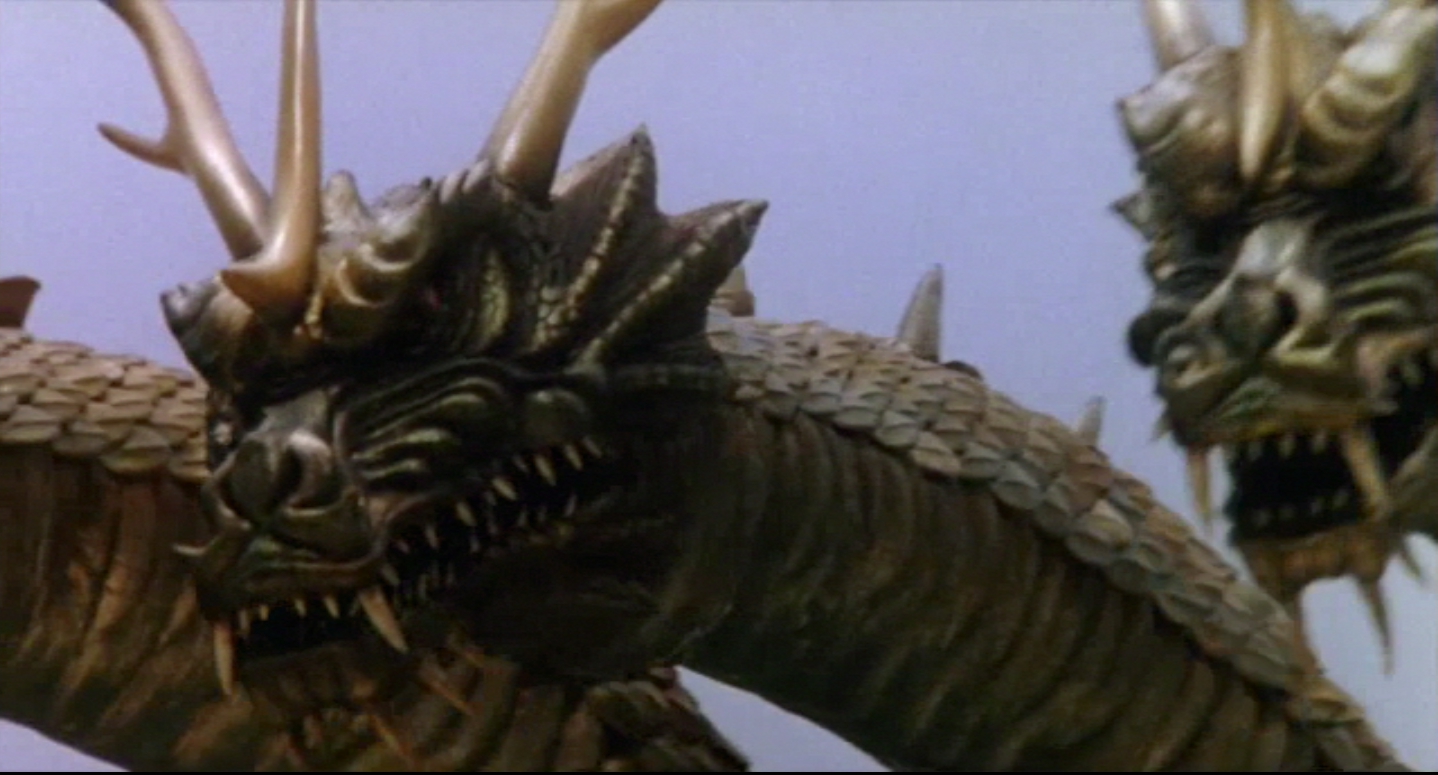 This is not the four-legged Death Ghidorah from the first Rebirth of Mothra film. This is more the classic Ghidorah, two legged, golden scales, two tails, and with horns. The suit looks great. It has the cry of the Heisei Ghidorah, rather than the ringing Showa one, but that's not a huge loss. The yellow lightning like breath is back, and in keeping with the multiple attacks of all the kaiju in the Rebirth series, it also has an energy beam that trickles from its wing-vanes. I'll also note that the Ghidorah of the Rebirth of Mothra films is finally not under anyone's cotnrol. for most of its films, Ghidorah has been beholden to the Futurans, the Roaches, the Kilaaks, or the Xilians. Here, he seems to be a free agent, destroying for food, rather than someone else's agenda. 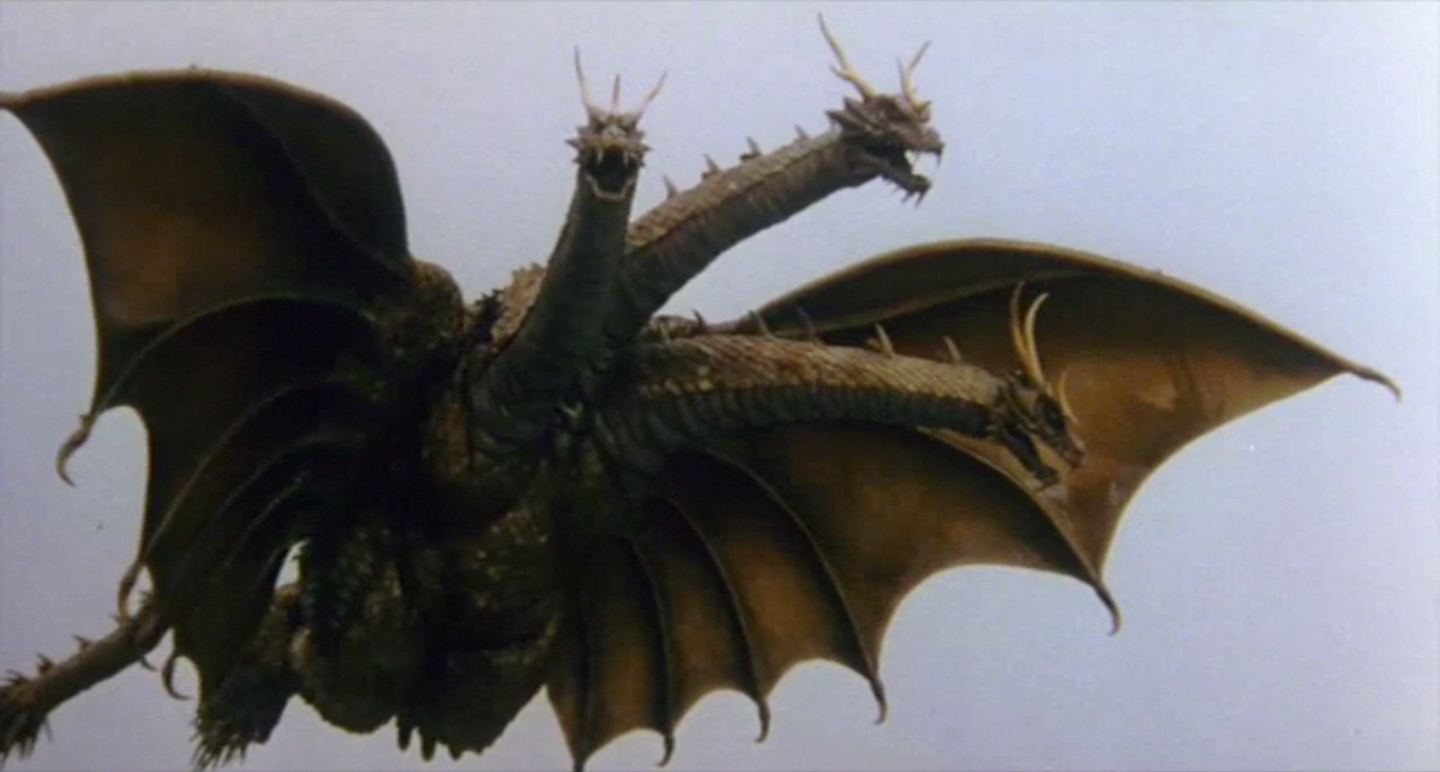 Ghidorah is now stealing children, which is also a variation from its past behavior. This device children in the forefront of the plot. Previously, Ghidorah had killed all the dinosaurs. Now he's collecting kids in some sort of cocoon, probably to eat them later. We get several scenes of worried parents, and their concern for their missing children. This gives the film a bit more conext than the usual isolation of the child during the adventure.

Mothra is summoned to defeat King Ghidorah, and the two kaiju fight. But Mothra's energy beams just bounce off Ghidorah, while the latter's gravity beams hammer at the monstrous moth. In the end King Ghidorah is simply too powerful for Mothra, so she must defeat Ghidorah the same way it was defeated in Godzilla vs King Ghidorah. But Mothra knows that after it travels back in time, it will not be able to return. 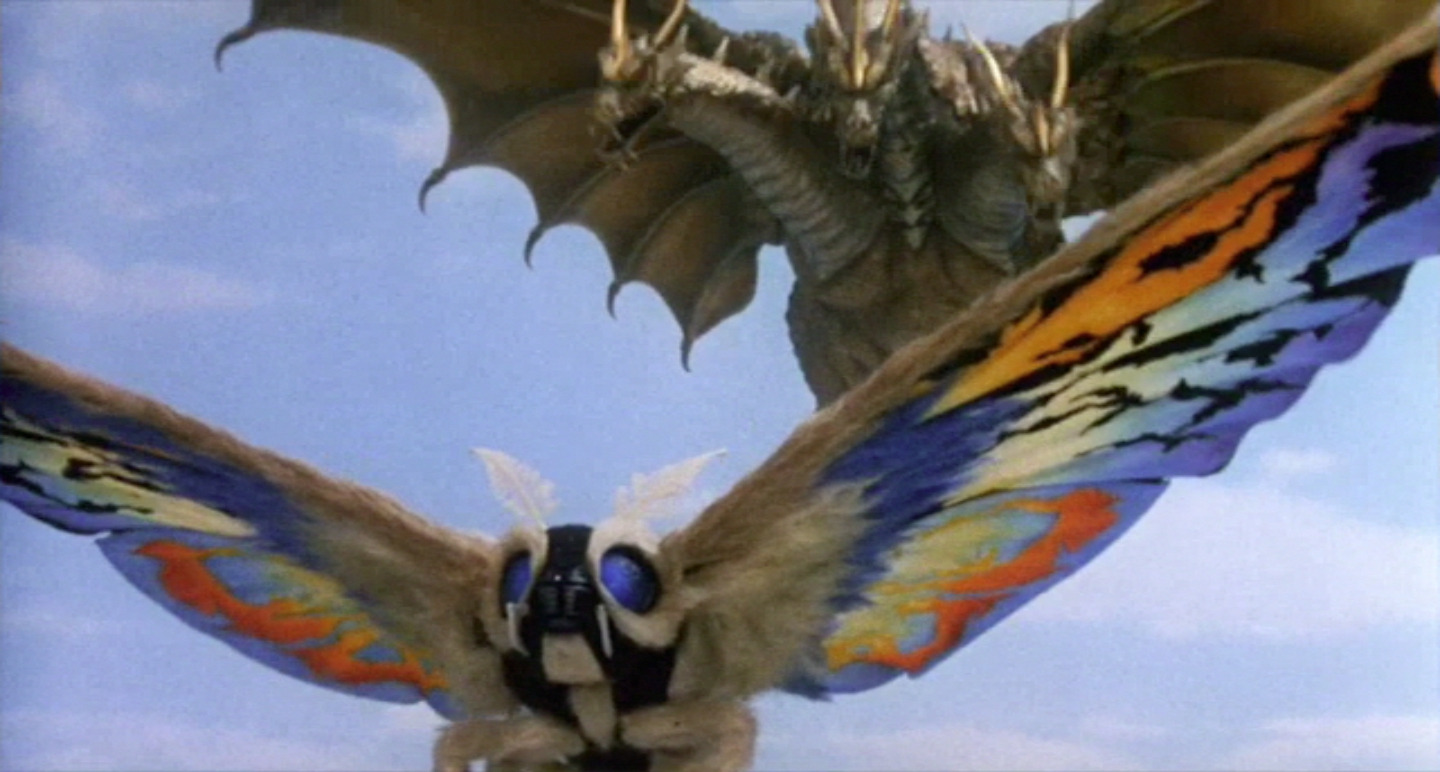 And so Mothra returns to the time of the dinosaurs. They are primarily puppets, as even the mighty reptiles aren't nearly as large as kaiju. There's a touch of irony as a tryannosaur attacks a triceratops, only to ber interrupted and eaten by the 160 million years younger version of Ghidorah. Younger Ghidorah breathes fireballs rather than lightning, and its faces are rilled with horns. 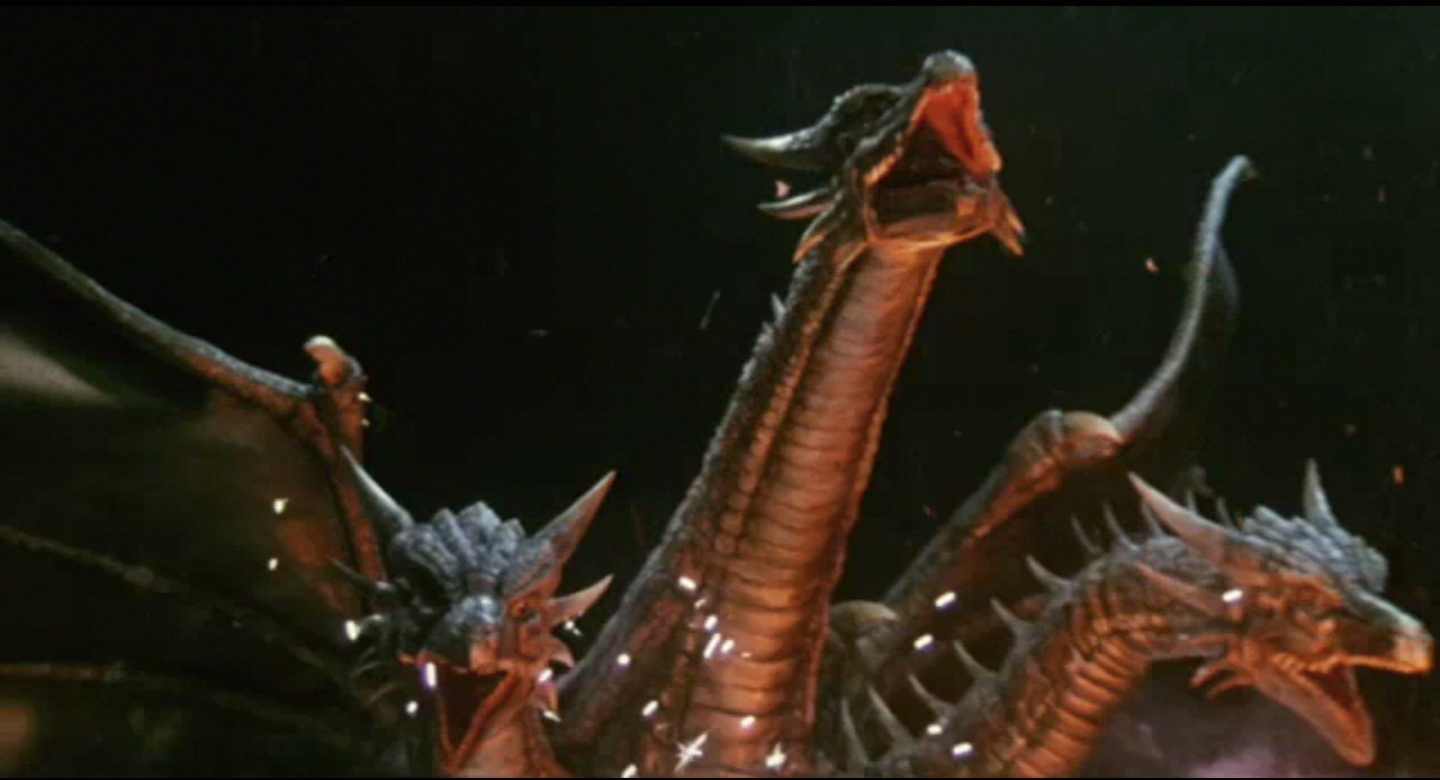 There's just a tiny Reptilicus not in the middle of the Mothra/Cretacious Ghidorah fight. A part of Ghidorah's tail is severed, which then burrows into the earth in order to regenerate into an entirely new Ghidorah.

Mothra looks like it is losing the fight until Lora sings, conencting to Mothra through some hundred and sixty million years. Then Mothra, with a touch of inspiration and a little magic, escorts Ghidorah down the throat of an active volcano. 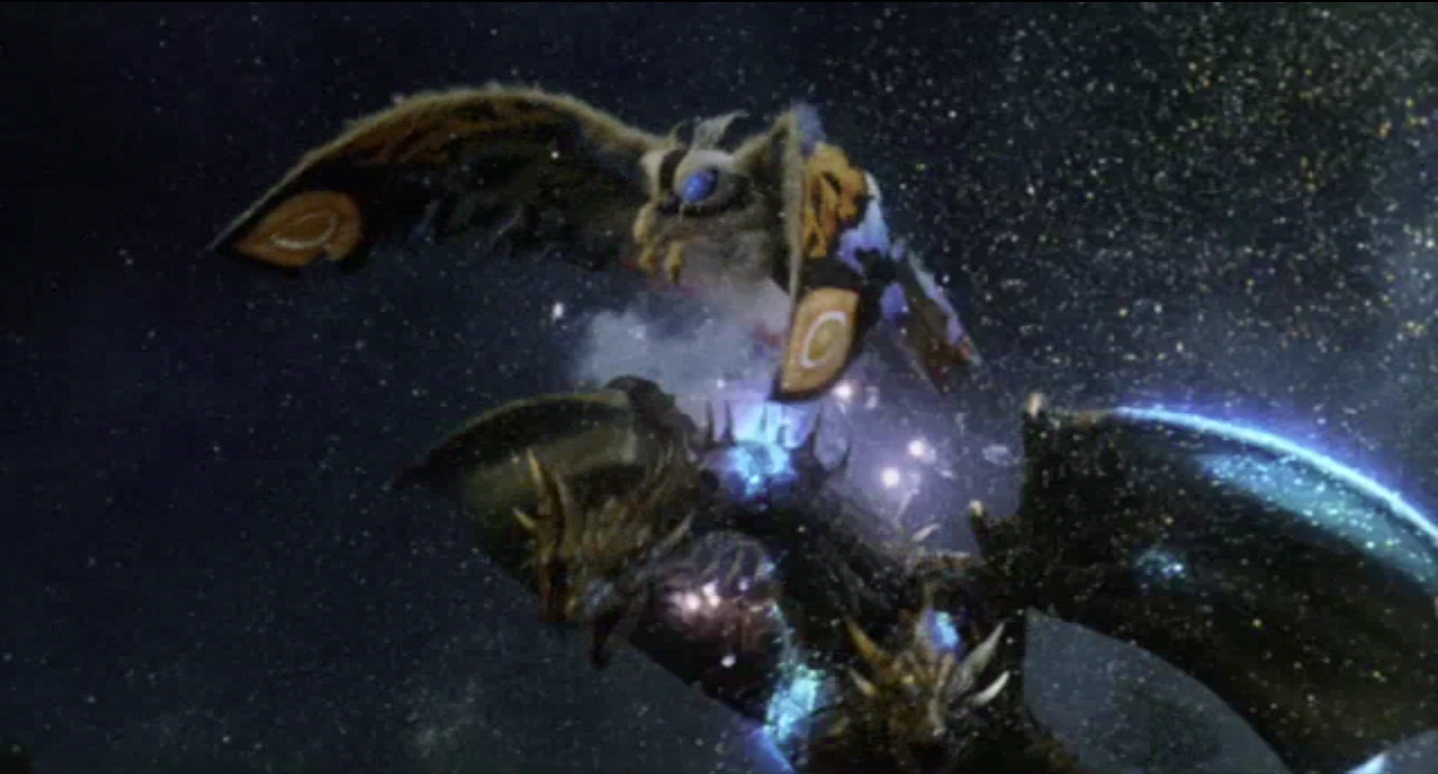 This causes present Ghidorah and its imprisoning bubble to vanish. But Mothra isn't dead, but dying. As is lies on the ground, three prehistoric verions of Mothra larvaa arrive, and cocoon the fallen warrior. Like the first Rebirth of Mothra, also directed by Okihiro Yoneda, the death of Mothra is genuinely touching, emphasized by music and a more somber mood. 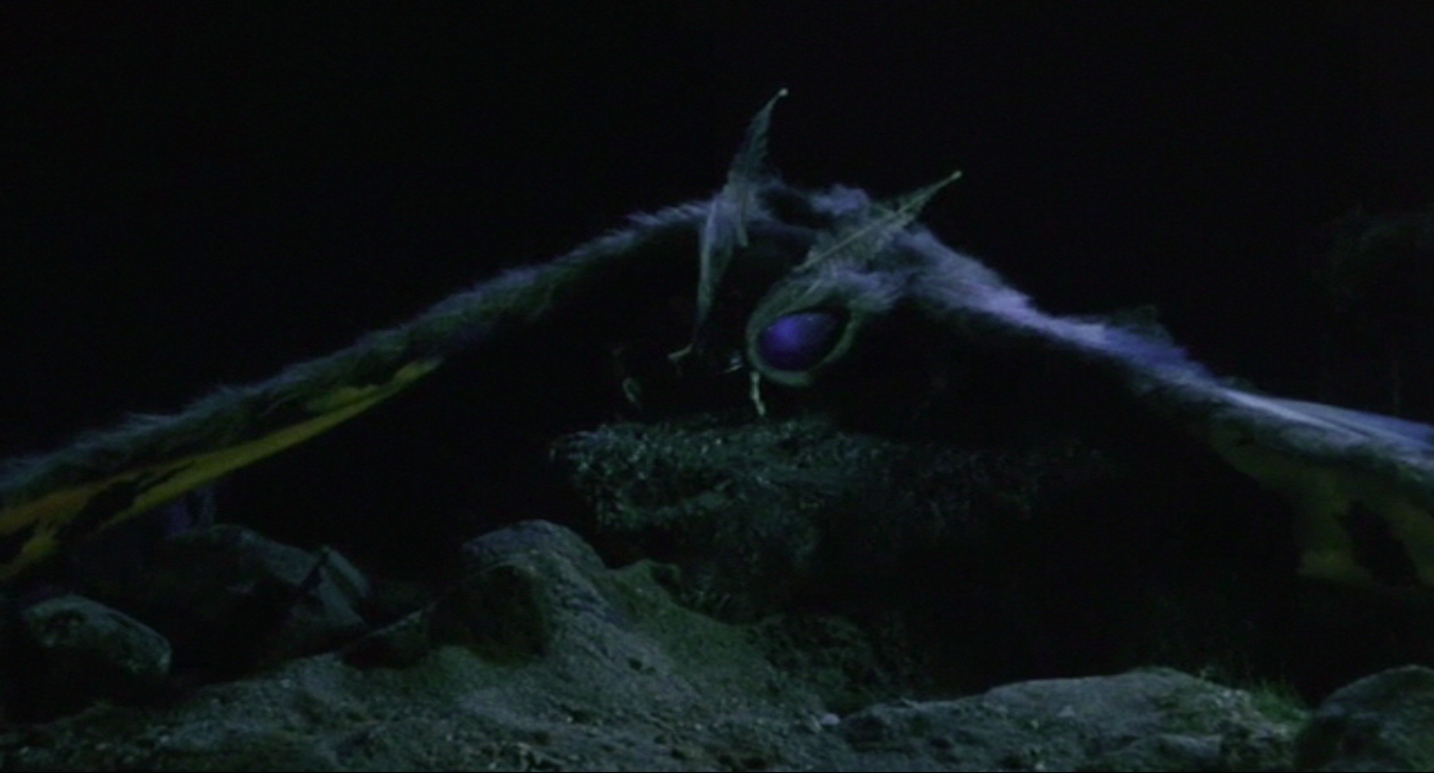 But Ghidorah isn't dead, of course. It arrives the way it did in the Ghidorah the Three-Headed Monster, a fireball from the sky turning into Ghidorah. 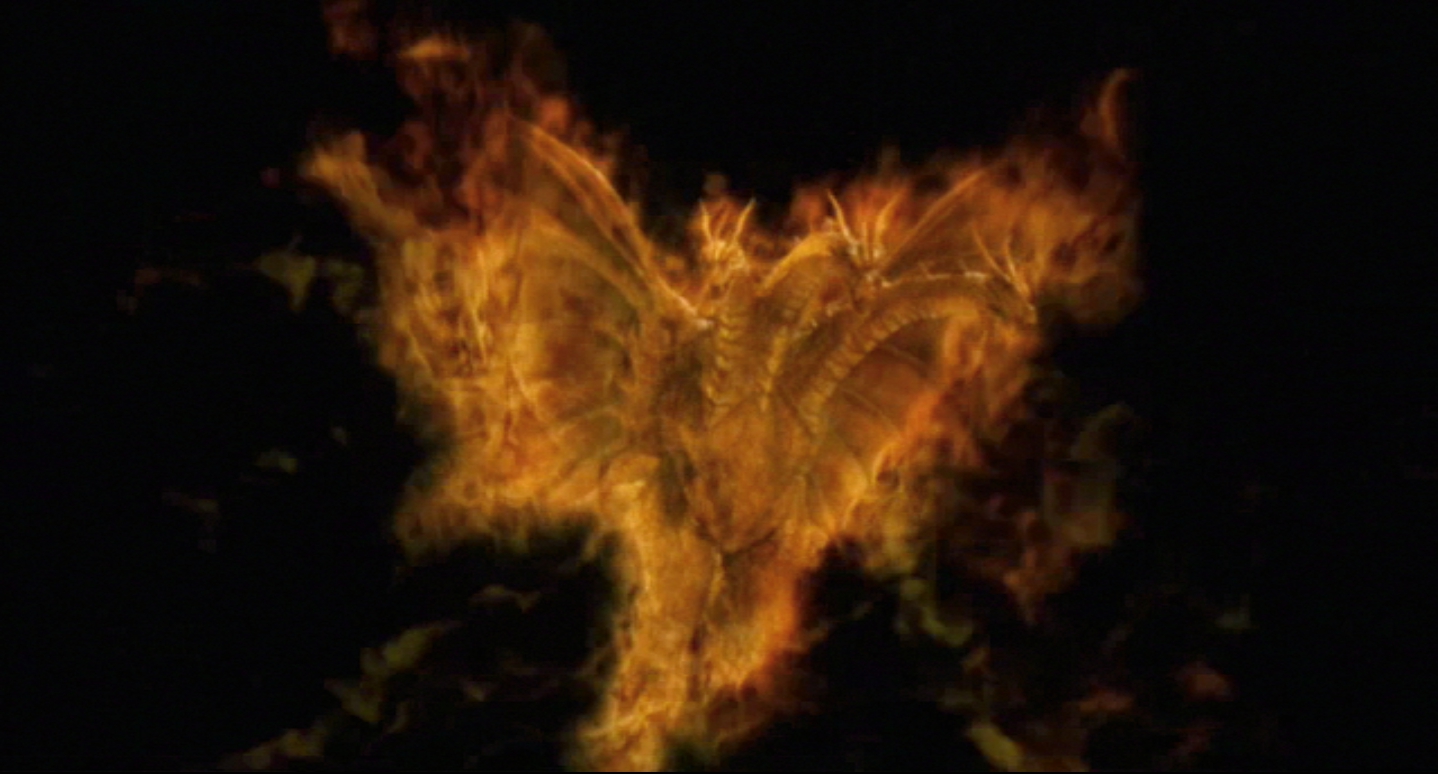 And just when Moll and Belvera think they are going to have to take on Ghidorah by themselves, a closeby ridge crumbles, revealing an ancient egg. Mothra emerges, its wings drying almost instantly. It hadn't been dead all this time, merely resting. And now it's time to defeat Ghidorah again. Eschewing energy beams, Mothra uses her sharp wing leads to slice off Ghidorah's wings. She then passes through Ghidorah, causing it to explode. 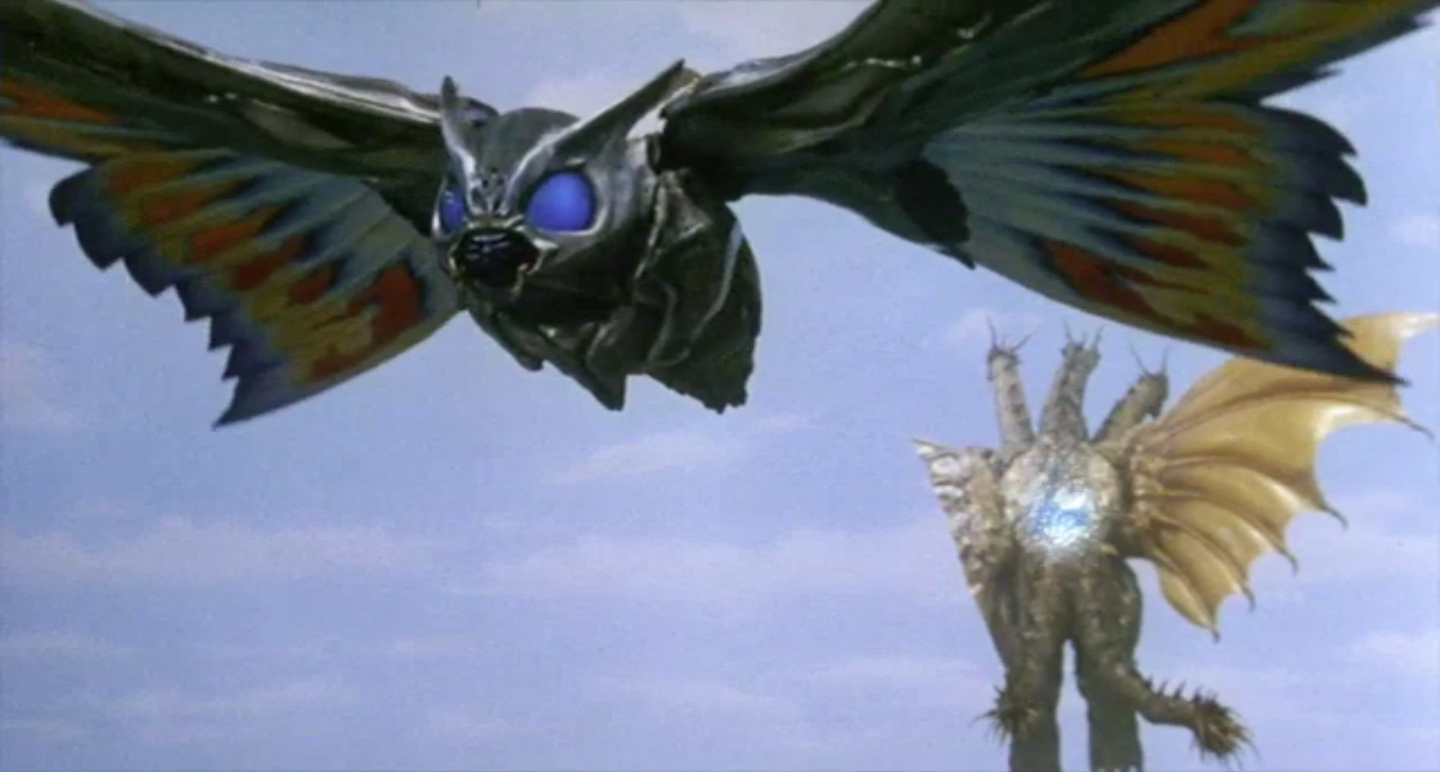 Although I haven't talked much about the human aspect of the film, the end is good. Father and son reconnect in a non-chlche way, the boy having gotten his validation from the Mothra triplets.

This is, incidentally, Tsutomu Kitagawa's first time in a suit, after being a stunt man for ten super sentai television series. He would go on to be Godzilla for the majority of the Millennium series.

Rebirth of Mothra III is probably the strongest film of the Rebirth series. The themes are less heavy-handed, the costumes and monsters better designed. the film is aware of its predicessors, and there are small jokes here and there. There's a depth to the series, involving the parents, sowing discord between the usually-united twins. It made a good interim series between the Heisei and the Millennium series. Continued on this trajectory, Toho could have made some excellent films after the Millenneum series. Ah well.

Next up, a cheapie from a new continent. Gargantua, from Australia.
Posted by John Goodrich at 2:12 PM